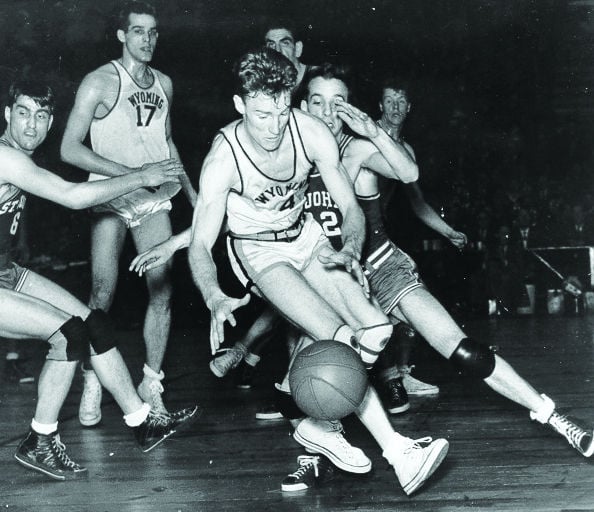 Former Wyoming basketball star Kenny Sailors grabs a loose ball during the Cowboys' game against St. Johns in 1943. A documentary on the NCAA championship team, "Cowboys!", will premier on Thursday in Laramie. 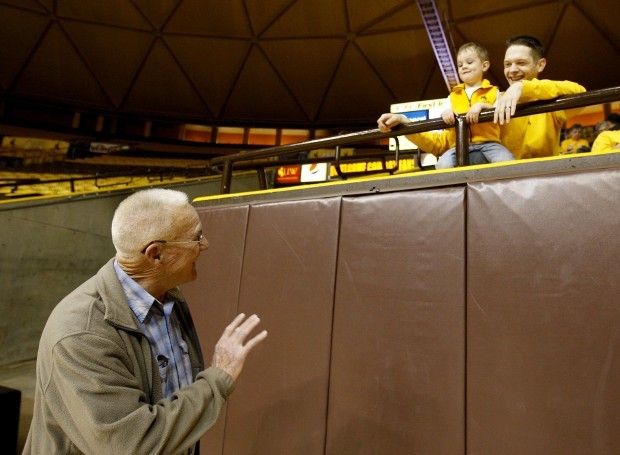 Legendary University of Wyoming basketball player Kenny Sailors waves to Zander Allen, 2, and his father, Jeff Allen, before a game on March 14, 2012, at the Arena-Auditorium in Laramie. Sailors died Saturday at the age of 95.

Kenny Sailors, who many credit with inventing the modern jump shot, died in his sleep early Saturday morning in Laramie. He was 95.

Sailors, who suffered a heart attack in December and had been under medical attention since then, is the lone University of Wyoming basketball player to have his number retired.

“He touched so many lives. ... I know the people of Wyoming, like all of us in Wyoming Athletics, will miss him, but we are grateful that we had the opportunity to know him for so many years.”

Sailors was named the most valuable player of the 1943 NCAA tournament after scoring 16 points and leading the Cowboys to a 46-34 victory over Georgetown in the national championship game. Two days later, Wyoming (31-2) beat National Invitation Tournament winner St. John’s.

The Cowboys also twice beat the Phillips 66ers, the Amateur Athletic Union champions, as well as the Armed Forces All-Stars.

Sailors developed the jump shot while growing up on the family farm in Hillsdale, outside of Cheyenne. Playing against his 6-foot-6 older brother, Bud, the 5-10 Kenny Sailors “invented” the jump shot as a way to shoot over his taller brother.

At a 2012 press conference after he was elected to the National Collegiate Basketball Hall of Fame, Sailors refused to take full credit for inventing the jump shot. Instead, he quoted former DePaul coach and Hall of Fame member Ray Meyer.

“Ray Meyer put it best,” Sailors told the Star-Tribune. “He said, ‘There are several people that claimed to have invented the jump shot. Kenny doesn’t make that claim, but he does claim that he developed the jump shot (that) is being used today.’

Sailors was inducted into the University of Wyoming Athletics Hall of Fame in 1993.

“I think he’s not only a noteworthy figure in Wyoming athletics history, I think he’s one of the great figures in the state of Wyoming’s history,” said Ryan Thorburn, author of “Cowboy Up: Kenny Sailors, The Jump Shot and Wyoming’s Championship Basketball History.”

Sailors served in the Marines for two years (1943-45) before returning to UW and once again earning All-American honors for the 1946 season.

He later served as a hunting and fishing guide in the Jackson area and then in Alaska before moving back to Laramie about 10 years ago, following the passing of his wife, Marilynne.

While in Alaska, Sailors coached high school girls basketball and is credited with introducing the state’s first girls state tournament. He led Glenallen High School to three consecutive girls state championships and a 68-game winning streak during his time as head coach.

“The thing that’s he’s known for is he’s the guy who created the modern jump shot,” Brandenburg said. “It’s been a long time that he’s done this, and I think now the whole world is starting to wake up and realize that he is the creator of the modern jump shot. But he is much more than that. He was just a great human being. He’s done a lot of good wherever he’s lived.”

After returning to Wyoming, he became a regular at the Arena-Auditorium in Laramie.

He often frequented practices and served as a mentor to student-athletes.

“As far as his demeanor, he was just really one of those guys that strangers would go up to him and get pictures and he didn’t mind telling the story over and over again to everyone he encountered,” Thorburn said.

“The University of Wyoming has lost one of its great heroes and ambassadors with the death of Kenny Sailors,” UW President Dick McGinity said. “As the entire university community mourns his passing and celebrates his life, we offer our thoughts and prayers to his family.”

“Very strong person,” Brandenburg said. “He’s strong with his beliefs, his convictions. In many ways, he’s just an original cowboy.”

When fans enter the Arena-Auditorium today for the Wyoming Cowboys’ game against New Mexico Highlands, they’ll pass an 18-foot statue of the s…

Former Wyoming basketball star Kenny Sailors grabs a loose ball during the Cowboys' game against St. Johns in 1943. A documentary on the NCAA championship team, "Cowboys!", will premier on Thursday in Laramie.

Legendary University of Wyoming basketball player Kenny Sailors waves to Zander Allen, 2, and his father, Jeff Allen, before a game on March 14, 2012, at the Arena-Auditorium in Laramie. Sailors died Saturday at the age of 95.