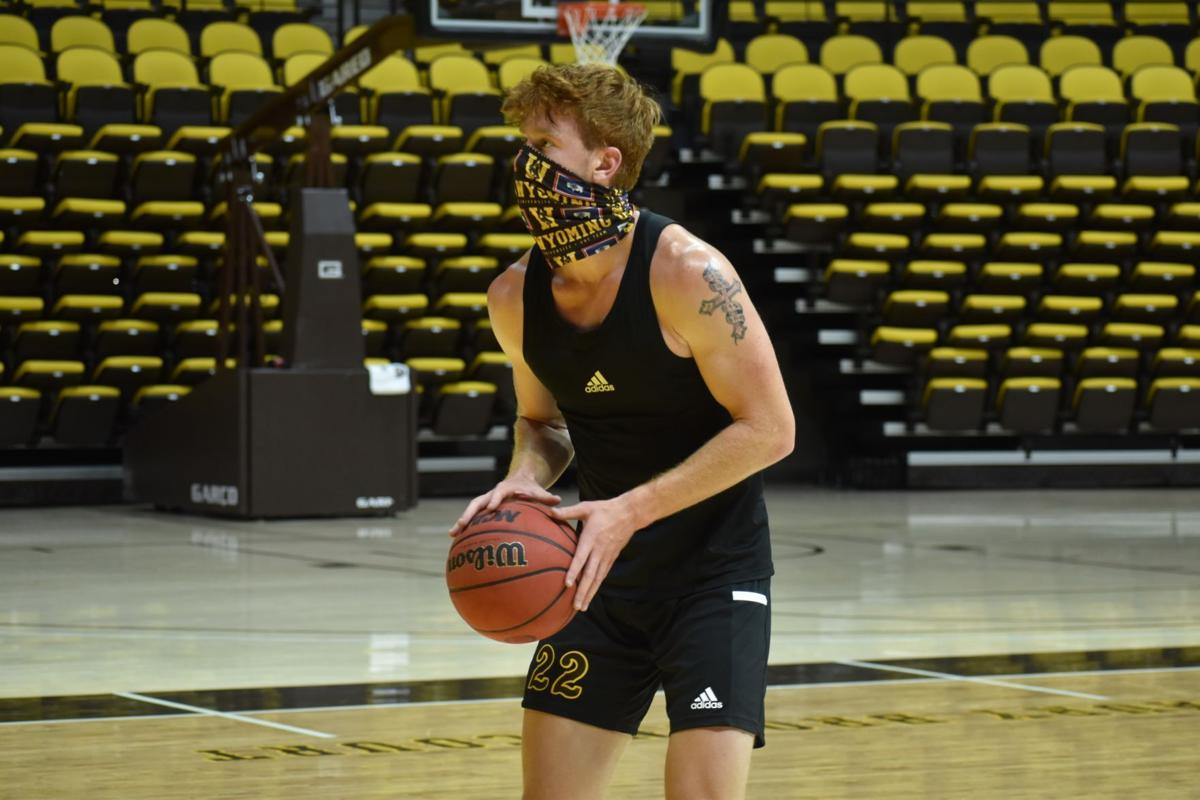 Wyoming sophomore guard Kenny Foster prepares to shoot during a workout this summer at the Arena-Auditorium in Laramie. UW's men's and women's basketball teams are in the midst of mandatory summer workouts, but the NCAA's decision regarding the start of the season is looming. 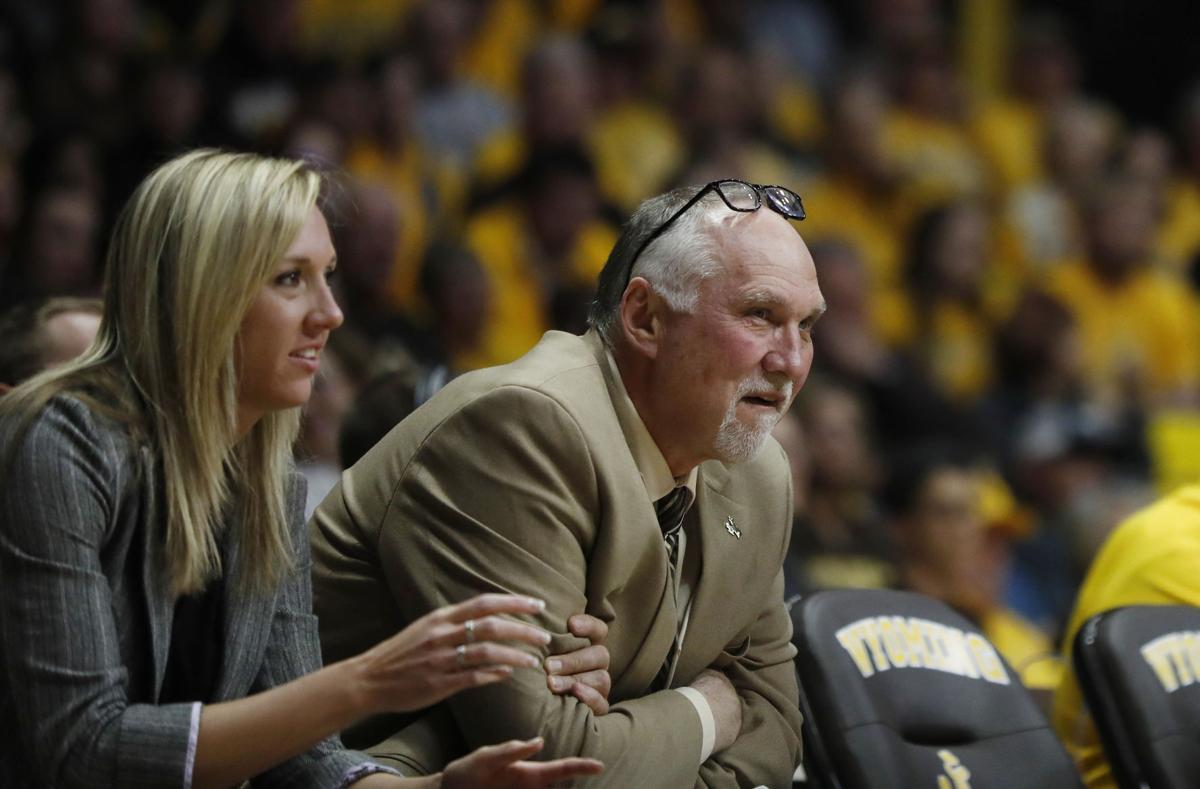 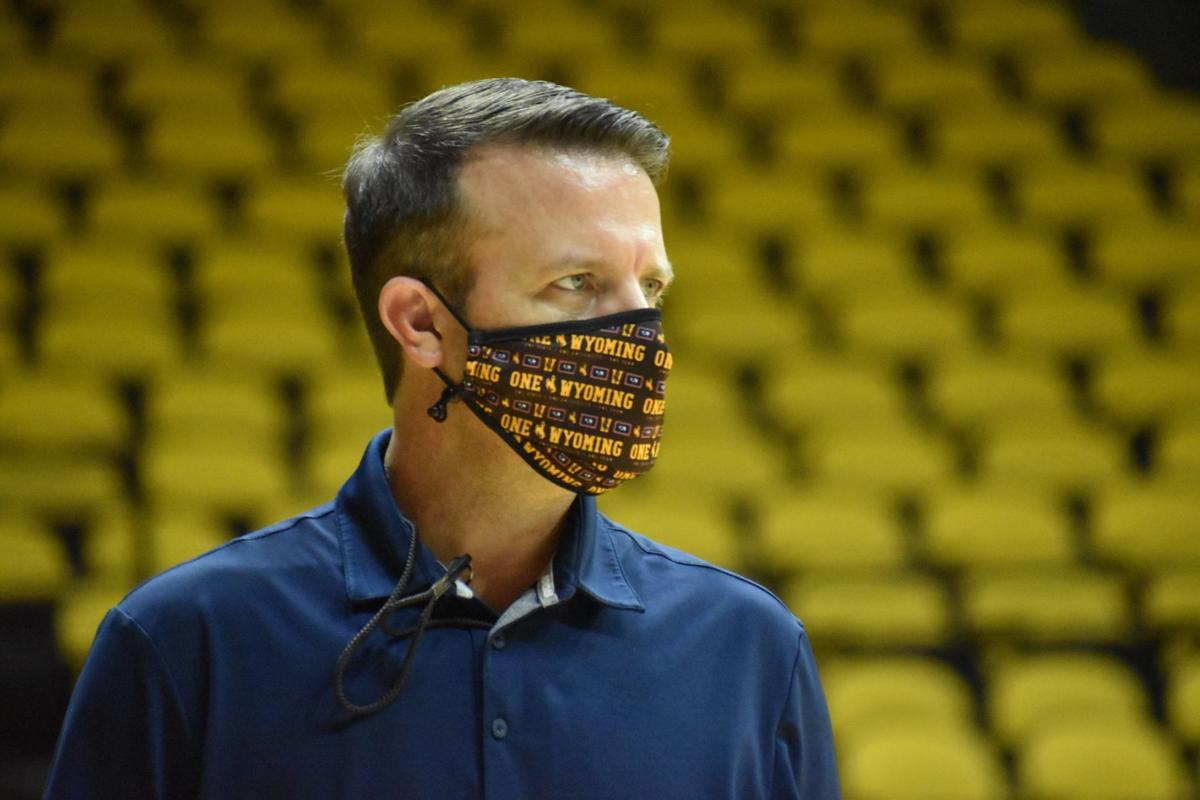 Wyoming first-year men's basketball coach Jeff Linder wears a mask as he looks on during one of his team's workouts this summer at the Arena-Auditorium in Laramie.

LARAMIE — College basketball is now on the clock.

It’s actually been that way for a while, but for conferences that have already postponed fall sports amid the coronavirus pandemic, it’s particularly true. Those include the Mountain West, which means there won’t be any sponsored sports competitions at the University of Wyoming until November at the earliest.

That’s when basketball is scheduled to start competing. UW’s men’s basketball team is supposed to start its season Nov. 10 against Division II Colorado Christian while the UW women are slated to get going two days later against Montana at the Arena-Auditorium.

But every opponent on the slate so far is written in pencil rather than pen.

While the Pac-12 has already canceled all competition through the end of the calendar year, the NCAA plans to rule in mid-September on whether the rest of its member institutions can start the season on time or if a postponement is needed. Specifically, according to a report from CBS Sports, the NCAA is looking at alternative start dates of Nov. 20, Nov. 25 and Dec. 4.

In other words, after football and the rest of UW’s fall sports spent months waiting for a decision on the fate of their respective seasons, it’s the UW basketball teams’ turn to do the same.

“I think it’s one of those deals where you can sit there and spend all day long worrying about things you’ve got zero control over,” UW first-year men’s coach Jeff Linder said. “Those are decisions that are made above me, and all I can do right now — and I told the players this — is we’re going to prepare to play on Nov. 10. Until they tell us something different, that’s what we’re going to focus on.”

While different decisions made by different Division I conferences as to whether or not to play football have dominated the headlines this summer, college basketball programs around the country have quietly started gearing up for a season that, for now at least, is just a couple of months away. As part of a revised men’s and women’s basketball summer activities plan approved by the NCAA’s Division I Council, teams have been able to get in a combined eight hours of virtual and in-person activities per week since July 20.

UW’s teams have spent that time largely on film study, weightlifting sessions and on-court workouts with no disruptions so far. Like all sports, players and coaches involved with UW’s men’s and women’s basketball programs were tested for COVID-19 by the athletic department upon returning to campus earlier this summer. The university, which started the fall semester online but plans to eventually phase students back for in-person instruction, is also requiring all students and staff members to be tested before returning to campus for classes, so many coaches and athletes have already been tested twice.

UW has had four athletes knowingly test positive at this point, but Linder and UW women’s coach Gerald Mattinson said all players and members of their coaching staffs have tested negative so far. They’re doing what they can to try to keep it that way.

“We’ve tried to stay spaced,” Mattinson said of the Cowgirls’ on-court workouts. “We’ve tried to, for the most part, limit the amount of times the balls exchange hands.We try to keep everybody with their own basketball as much as we can. A lot of hand sanitizer being spread around and used. So far, that’s what we’ve been doing, but probably here next week sometime or the week after, we’re going to have to go ahead and go (with some contact). Let’s get going with this. Close contact is going to be inevitable.”

The time on the court has been particularly helpful for the Cowboys, who are implementing new systems on both ends of the floor with a roster that’s undergone an extreme makeover since Linder was hired away from Northern Colorado in March to replace Allen Edwards. Guards Hunter Maldonado, Kenny Foster and Kwane Marble II and forward Hunter Thompson are the only holdovers from last year’s team.

With eight new players in the fold, including five true freshmen, going through team and individual workouts is giving everybody a head start on getting acclimated to a system that some of the returning players said emphasizes a rapid-fire offense far more than previous years.

“(Linder) loves to shoot the ball and loves to transition where Coach E was much more old-school, defensive, we’re going to slow the game down and all that kind of stuff,” said Foster, who made six starts as a true freshman last season. “Even on made shots, he wants us to go down and get a great shot as quick as possible. He wants as many possessions in a game that we can possibly get.”

Said Thompson, “It’s just new attitudes, new concepts and new, little details that you just got to pick up on. The thing I like about him and the rest of the coaching staff is they are straight shooters and they tell you the truth.”

Players and coaches don’t go through any sort of team activity without wearing masks, or at least having the option if needed. Coaches wear them constantly, and Mattinson said his players do, too. Players wear gaiters around their necks during workouts, and Linder said the only time his players don’t have to pull them over their nose and mouth is during team and individual drills.

“It’s really tough trying to breathe and coach in masks, but it’s something we’ve gotten accustomed to and used to,” Linder said. “We try to wear them as much as possible, but we also know that we try to keep our space and make sure we social distance as much as possible.”

The precautions UW’s basketball teams are taking aren’t limited to the gym as they try to do everything they can to ensure themselves of having a season. Linder said all of his players are enrolled in classes that will remain online even if UW does bring in-person instruction back this semester. The Cowgirls have seven international players on their roster compared to just one for the Cowboys, and many of them have majors that require their attendance for on-campus lab classes, so Mattinson said he won’t be able to isolate his players from the rest of the student body as much.

But both Linder and Mattinson said they consistently talk to their players about controlling the environments they’re in when they’re off campus.

“Part of what they have to do is make sure that when they leave the athletic facilities, they’re trying to social distance and trying to do the best they can to limit the exposure that might be going on,” Mattinson said. “We understand that’s really, really tough because they’ve got lives to live, too. They’re trying to get to the grocery store just like all of us. But our thing is when you do that, please be safe.”

Players increasing their risk of exposure by going to bars, house parties or other social functions with large gatherings that are typical of the college experience is of particular concern for Linder and Mattinson. The university’s pre-return testing has seen a spike in the number of COVID-19 cases in students and staff members. All 30 active UW-related cases live off campus.

But members of UW’s men’s basketball team said they share Linder’s concern and are being cautious about how they spend their free time. Since returning to campus in June, Foster said he has stayed “as far as I possibly can away” from downtown Laramie, where much of the college town’s nightlife is focused.

In fact, if players decide they want to do something socially, they often confine it to the team. That usually means going to each other’s apartments and playing video games or watching the NBA playoffs, Thompson said.

“Sure, I wish I could have maybe went out with my girlfriend or my friends to go to the bars or go eat downtown,” said Thompson, a redshirt junior. “But I think we know as a team, it’s something that’s a sensitive issue. And if we do want to have a season, I believe that collectively we all understand that we’ve got to kind of watch what we do.

“I’m just worried about … it’s really hard to tell the (rest of the) student body that you can’t go out on a Friday night, so that’s the only thing I’m worried about. I’m not worried about our guys as much.”

Even if UW’s teams are able to continue steering clear of the novel coronavirus, that’s just one part of the equation. There are men’s and women’s basketball programs at more than 345 Division I schools nationally, and they’re all bringing students back to their campuses, too.

Linder said he doesn’t expect the season to start on time. If it’s postponed, he’s hopeful a season could start in January at the latest that would allow teams to at least play a full conference schedule.

“But those are things I don’t know and (our players) don’t know,” Linder said.

No teams other than those in the Pac-12 know at this point, and, at least at UW, the guessing game is getting old. The plan for the Cowboys and the Cowgirls is to simply control what they can control and hope for the best.

“I’m at the point where I’ve discussed it and talked about it with a number of people — both coaches and administrators at other schools and other leagues — and I’ve given up,” Mattinson said. “I’m at the point where whatever the decision-makers decide, that’s what we’re going to go with and we’ll be supportive of it.

“We’ll work on our practices and our individuals going forward as if (playing a non-conference schedule) is going to happen, and we’ll plan that way until someone tells me otherwise.”

NCAA plans mid-September decision on the start of basketball season

UW is slated to play three games in post-Thanksgiving event.

Wyoming sophomore guard Kenny Foster prepares to shoot during a workout this summer at the Arena-Auditorium in Laramie. UW's men's and women's basketball teams are in the midst of mandatory summer workouts, but the NCAA's decision regarding the start of the season is looming.

Wyoming first-year men's basketball coach Jeff Linder wears a mask as he looks on during one of his team's workouts this summer at the Arena-Auditorium in Laramie.