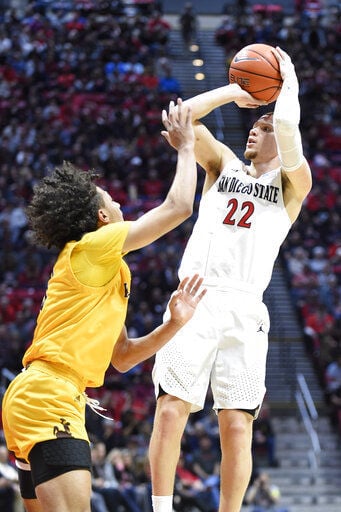 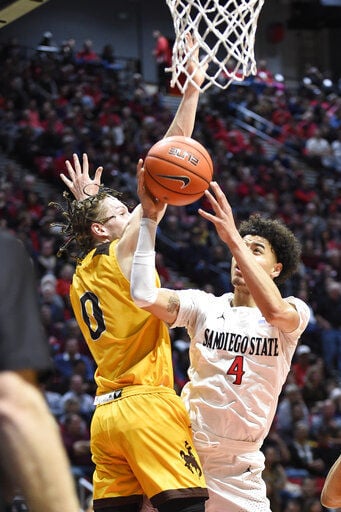 Wyoming’s rematch with college basketball’s lone unbeaten went much like the first meeting.

Wyoming couldn’t keep up with No. 4 San Diego State’s hot shooting in a 72-55 loss at Viejas Arena in San Diego. The win gave the Aztecs a season sweep of Wyoming, which dropped both matchups to SDSU this month by a combined 37 points.

Wyoming’s losing streak against MW competition now sits at 10 games dating back to last season. It’s a skid the Cowboys will once again try to stop Jan. 28 against Utah State at the Arena-Auditorium.

Jake Hendricks matched his season-high with five 3-pointers and scored a game-high 20 points for Wyoming while freshman Kwane Marble II added 12 points for his second straight game in double figures. But nobody else for the visiting team reached double figures with the Cowboys struggling to hold on to the ball.

Wyoming shot 43 percent from the field and won the rebounding battle (27-24) for the first time in a league game but committed 16 turnovers in its seventh straight loss. Hunter Maldonado, the MW’s fourth-leading scorer coming in, finished with just seven points — 10 fewer than his season average.

SDSU, which tied a program record with its 20th consecutive win, got 18 points and five assists from point guard Malachi Flynn, 15 points from Matt Mitchell and 14 points from Yanni Wetzell. The Aztecs shot 54.3 percent from the field and 45 percent from 3-point range (9 of 20).

Wyoming trailed 32-19 at the half and by as many as 20 in the second half. The Cowboys were down just five with 6 minutes, 43 seconds left in the first half following Hunter Thompson’s layup, but the Aztecs answered with a 9-0 run that gave them a double-digit they never surrendered.

Wyoming gave SDSU plenty of help with 11 turnovers in the first 20 minutes that the Aztecs turned into 15 points. SDSU also outscored the Cowboys 18-1 in fast-break points.

ANOTHER ONE: Wyoming shot just 42.9 percent from the field and committed 16 turnovers in its 10th straight MW loss dating back to last season. 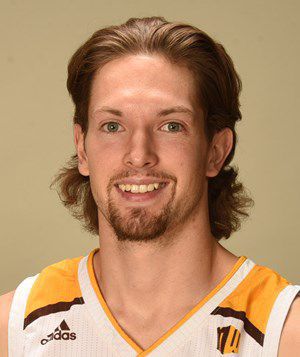