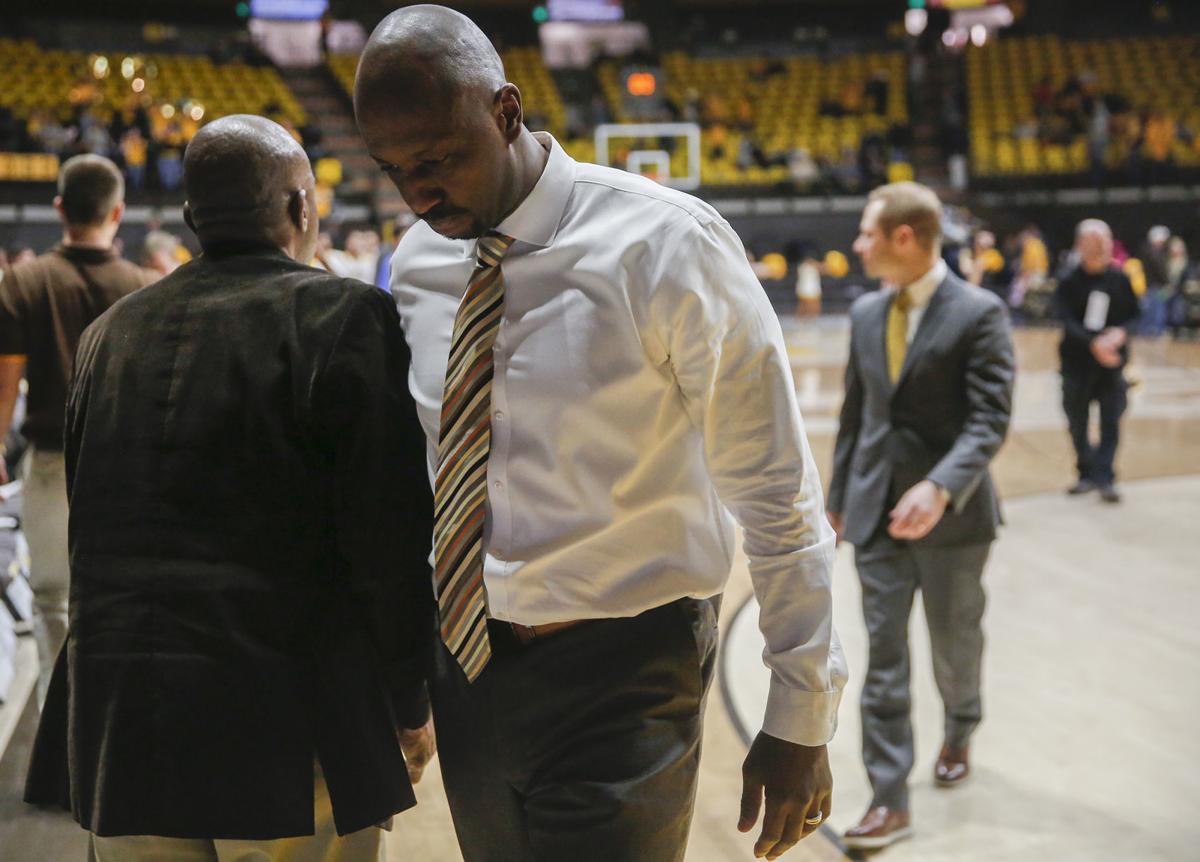 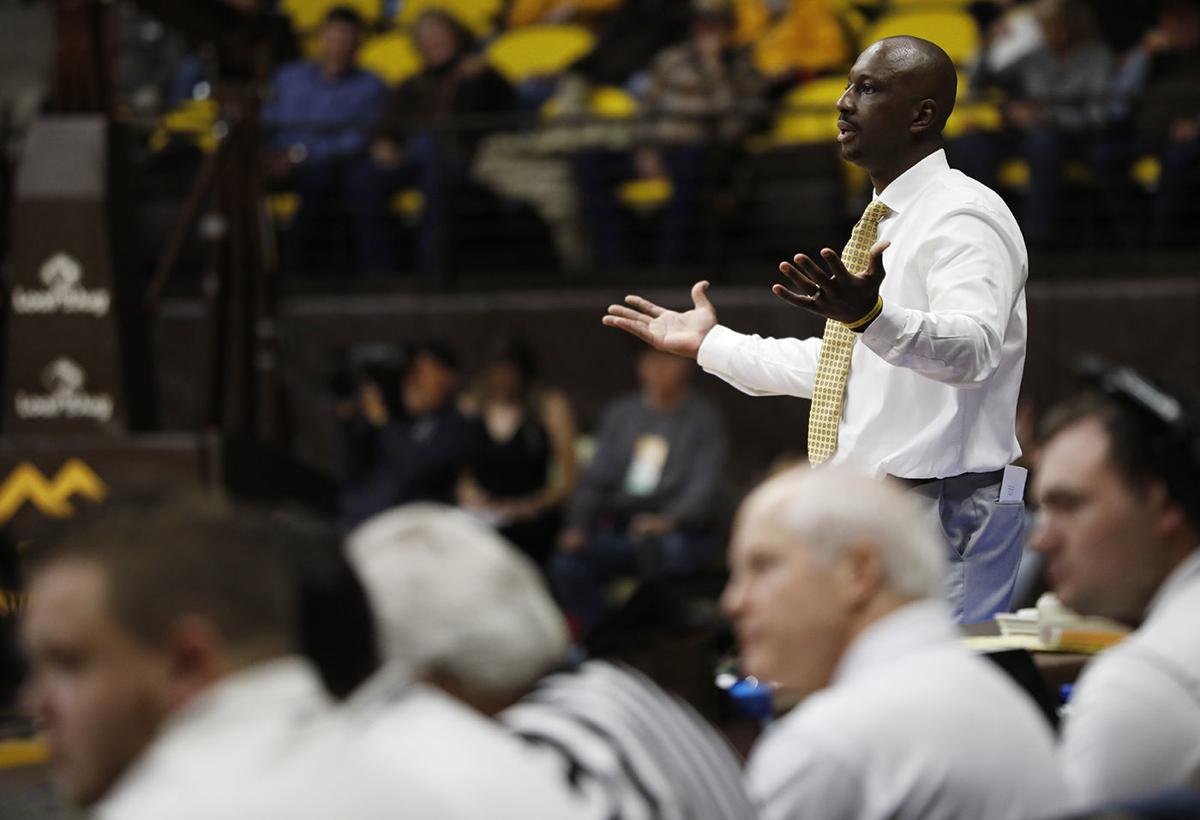 Wyoming coach Allen Edwards gestures toward the officials during the Cowboys' game against Colorado State on Feb. 9, 2019, at the Arena-Auditorium in Laramie. 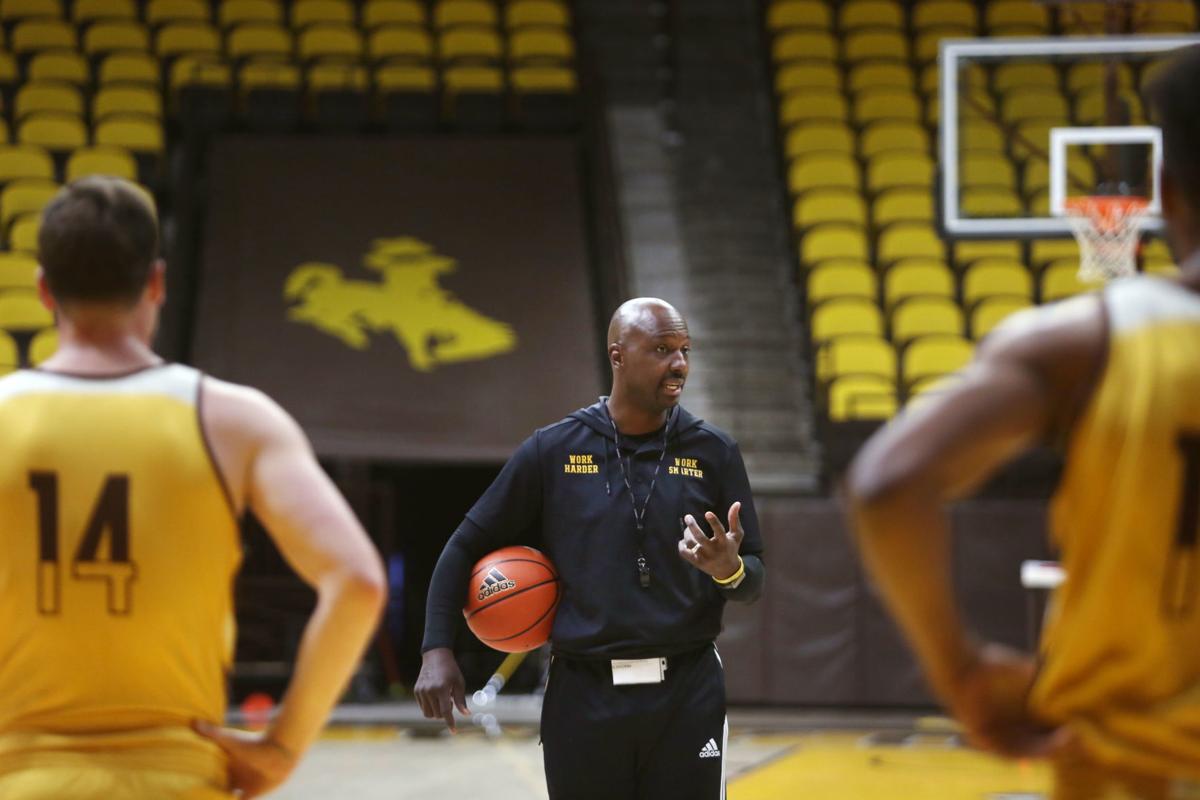 LARAMIE — Another underwhelming season has spelled the end of the Allen Edwards era at Wyoming.

Edwards has been fired after four seasons as the Cowboys’ men’s basketball coach, the school announced Monday. UW went 9-24 overall and just 4-17 against Mountain West competition this season with half of those wins coming during the Cowboys’ surprise run to the conference tournament semifinals.

Edwards, a former UW assistant who was promoted to head coach before the 2016-17 season, went 60-76 during his tenure with a 24-48 mark in conference play. He’ll be paid a base salary of $220,008 for the final year left on his contract. The Star-Tribune has learned Edwards will also be paid two months’ worth of additional base salary to cover the full 14 months left on his contract, which runs through April 30, 2021.

A national search for the Cowboys’ next coach is will begin immediately, the school announced in a release.

“I appreciate the contributions that Coach Edwards has made to Wyoming basketball as a head coach and prior to that as an assistant coach, but after the lack of success the past two seasons, I believe it is in the best interest of our program to make a change at this time,” UW athletic director Tom Burman said in a statement. “We were all very proud of the performance by the Cowboys at last week’s Mountain West Tournament, and I wanted to take some time to consider the future of our program after the emotion of last week. After considering all factors, we have not seen the type of on-court success we expect at Wyoming.”

Edwards’ tenure got off to a promising start after he was tabbed to replace Larry Shyatt, who had two different stints at UW and resigned just one year after leading the Cowboys to the MW Tournament championship and their most recent NCAA Tournament appearance in 2015. Edwards’ first season on the job proved to be his winningest as he led UW to a 24-15 record and a College Basketball Invitational championship, the Cowboys’ first postseason tournament title in 74 years.

Edwards became the first coach in program history to have back-to-back 20-win seasons in his first two years at the helm when the Cowboys went 20-13 during the 2017-18 season. But with a revamped roster entering his third season, the Cowboys took a nosedive.

Seniors Justin James and Jordan Naughton were the lone holdovers left from the Shyatt era during the 2018-19 season. Even with James leading the MW in scoring and eventually becoming a second-round draft pick of the Sacramento Kings, the Cowboys switched to a much slower pace of play given their personnel losses and suffered one of the worst seasons in school history. UW limped to an 8-24 record that included just four league wins, the fewest wins for the program since winning nine games during the 1972-73 season.

With an expectation of the Cowboys competing in the top half of the league, Burman said after the season there needed to be “dramatic improvement” heading into this season. But this one looked a lot like the one that came before it.

UW’s loss to Utah State in last week’s MW Tournament capped another single-digit win campaign, one in which the Cowboys finished last in the league standings with just two conference wins. UW lost 10 straight games to start the league portion of its schedule and had an 11-game conference skid going back to last season before beating San Jose State on Feb. 1. The Cowboys have lost 33 of their last 41 games against MW foes dating back to the 2017-18 season.

“We have a rich basketball tradition, and we need to return Cowboy basketball to a prominent position in the Mountain West Conference,” Burman said.

UW, which finished the season with a four-guard lineup after losing forwards Austin Mueller and Tyler Morman to injury, was last in the conference in scoring (62.7 points per game) and rebounding (minus-8.9). After ranking in the top 15 nationally in Edwards’ first two seasons in adjusted offensive tempo, which tracks a team’s possessions per 40 minutes, UW ranked 133rd in that category last season before dropping to 261 this season, according to kenpom.com.

The Cowboys also committed the sixth-most turnovers in the league (12.7 per game), a glaring issue throughout Edwards’ tenure. UW has averaged at least that many each of the past four seasons.

As decision on Allen Edwards' future looms, Wyoming's players lobby for their coach

“I want to thank Coach Edwards for the way he mentored the young men in his program,” Burman said. “He and his staff did many good things in the community. I also want to thank his family for all they have done for UW and the community. They have always represented our athletics department and the university in a first-class manner. We wish the Edwards family all the best in their future.”

It’s the first time since the 2009-10 and 2010-11 seasons that UW has had at least 20 losses in back-to-back seasons. Burman also made a coaching change then, firing Heath Schroyer during the 2010-11 season before eventually bringing Shyatt back for his second stint on the Cowboys’ bench.

Shortly after UW’s loss to Utah State last week, some of the Cowboys’ players took to social media to express their support for Edwards, whose rotation by the end of the season consisted of two seniors, six sophomores and two true freshmen. But the lobbying didn’t work.

Now Burman is looking for another coach to once again resuscitate the Cowboys’ program.

GOOD AND BAD: After starting his tenure with consecutive 20-win seasons, Edwards led UW to just 17 combined wins over the last two seasons, including eight conference wins. He finished his UW tenure with a 60-76 record.

HE SAID IT: "After the lack of success the past two seasons, I believe it is in the best interest of our program to make a change at this time." -- UW athletic director Tom Burman

Cowboys go cold down the stretch in loss to second-seeded Aggies.

LARAMIE — Even amid one of the worst seasons Wyoming’s men’s basketball program has ever seen, head coach Allen Edwards’ job was never in seri…

Analysis: Increasing talent level should be top priority for Wyoming's next coach

Wyoming's next coach, whoever it might be, will hopefully have some young talent to work with.

Wyoming coach Allen Edwards gestures toward the officials during the Cowboys' game against Colorado State on Feb. 9, 2019, at the Arena-Auditorium in Laramie.