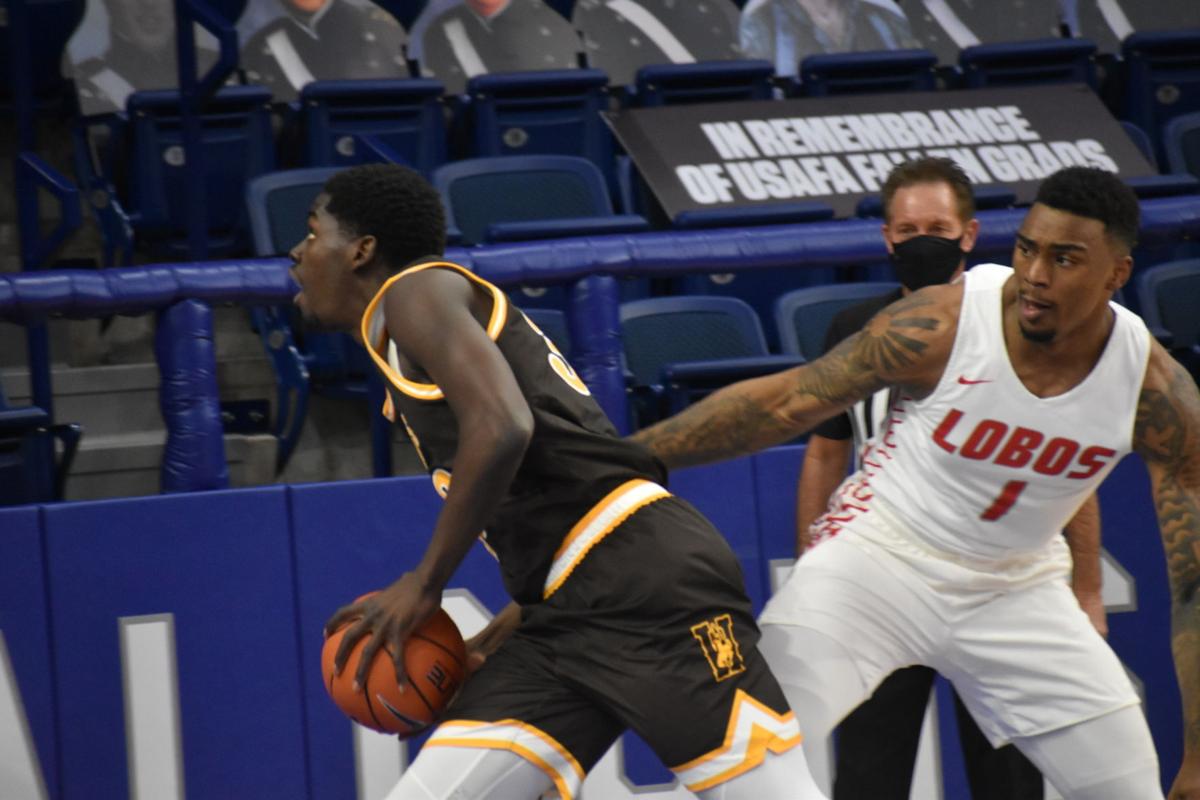 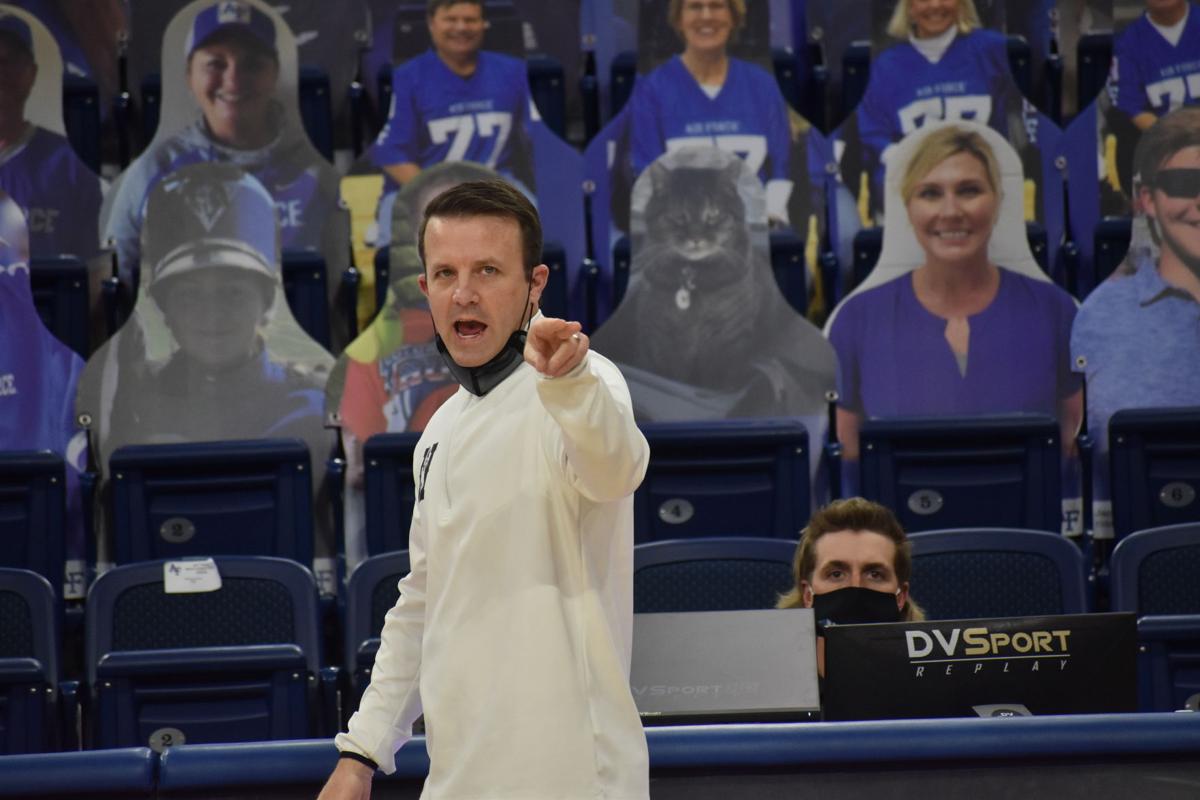 Wyoming coach Jeff Linder yells out instructions against New Mexico on Wednesday at Clune Arena in Colorado Springs, Colo. Linder was ejected late in the first half.

The Wyoming men’s basketball team had to play most of Wednesday’s game without its head coach, but the Cowboys made sure that’s all they lost.

Jeff Linder was ejected early in UW’s series opener against New Mexico, but UW got just enough offensive balance to rally for an 83-74 overtime win at Clune Arena in Colorado Springs, Colorado. Marcus Williams had 17 points and five assists to lead six UW players in double figures, the most the Cowboys have had in a game all season.

"We shot the ball better (in the second half)," said UW assistant Ken DeWeese, who served as acting head coach once Linder was tossed. "We got downhill a lot and got to the free-throw line a lot more than we did in the first half.

Hunter Thompson scored 14 points for his first game in double figures since Jan. 2, freshman Xavier DuSell had all 14 of his points after halftime, and Kwane Marble added 12 points and a career-high 12 rebounds for the Cowboys, who outscored UNM 12-3 in the extra period to snap a four-game losing streak. UW had to play the final 25 minutes and change without the guidance of Linder, who was ejected late in the first half of a game that featured 47 fouls and 53 free throws.

UNM, which got 17 points from Makuach Maluach and 13 apiece from Saquan Singleton and Isaiah Marin, shot 47% from the floor but just 46.4% from the free-throw line (13 of 28). UW made just 40% of its shots but sank 13 3-pointers and was more efficient from the charity stripe, making 16 of its 25 freebies.

Technically the road team, the Cowboys made eight trips to the free-throw line in overtime and converted seven of them. Clune Arena, which is on the campus of the Air Force Academy, is the fourth different location where UNM has played a "home" game this season since public health orders in New Mexico amid the coronavirus pandemic prevent the Lobos from playing games in their home state.

"The older you are and the more experience you have and maturity you have as a player, you're able to adjust to the officiating whether it's a lot more loose or whether the whistle is a lot tighter," DeWeese said. "For us right now, we don't have the guys with as much experience and the experience of having been in all those different kinds of games. They're learning. They're getting better at it. But it's hard to get in a rhythm (when that many fouls are being called). There's no question."

Things predictably started choppy for two teams coming off extended layoffs. UW, which had its series with Utah State postponed last week, hadn’t played a game since Feb. 6. The wait was even longer for UNM, which was playing its first game this month after having its previous two conference series called off because of COVID-related issues.

UNM still shot 43% from the floor in the first half compared to UW’s 33% clip, but the Cowboys made seven 3s and limited UNM’s second chances to help themselves take a 33-29 halftime lead. The Lobos came in as the Mountain West’s top offensive rebounding team (14 per game), but UW limited UNM to just four offensive boards in the opening 20 minutes and 11 for the game.

The teams were called for 21 fouls before halftime with the Cowboys on the receiving end of most of them. UNM shot 17 first-half free throws compared to five for UW, including six straight with 1 minute left in the half after Linder had seemingly had enough.

Once freshman big Graham Ike was whistled for a foul on Singleton, Linder was ejected after picking up consecutive technical fouls. DeWeese said neither he nor fellow assistants Sundance Wicks and Shaun Vandiver ever got an explanation from referees Randy McCall, David Hall and Rick Batsell as to what Linder specifically said or did to warrant such a quick ejection.

"It was kind of weird. That's one of the quicker ejections I've seen in my career," DeWeese said. "There's normal banter, and then it was straight to the ejection, not the first typical warning and then you've got to kind of get yourself under control a little bit."

DeWeese said he shared head coaching duties with Wicks and Vandiver in the second half and beyond. That's when things really heated up.

Marble sank two free throws to give UW a 71-68 lead with 47 seconds left before UNM freshman Javonte Johnson got a tying 3 to fall on the Lobos’ next possession. UW had one last shot to win it in regulation, but Williams’ shot at the buzzer missed the mark.

But Thompson and DuSell started the overtime period by hitting back-to-back shots at the end of the shot clock, and the Cowboys held UNM without a field goal over the final 2:36 to survive a wild first meeting between the teams.

"I think the biggest thing was making them take contested, tough shots, and most of those were contested, tough twos," DeWeese said. "And sometimes guys just miss shots. We were the same way in the first half, especially early. We had a lot of great looks and didn't knock them down. That kind of helped us in the second half, too. We just made a lot more shots."

UW and UNM will play an encore Friday when the teams conclude their two-game series, though it will be hard for them to match the entertainment value of this one.

PULLING IT OUT: UW head coach Jeff Linder was ejected in the first half, but the Cowboys rallied from multiple seven-point deficits in the second half to snap their four-game losing streak.

Wyoming coach Jeff Linder yells out instructions against New Mexico on Wednesday at Clune Arena in Colorado Springs, Colo. Linder was ejected late in the first half.