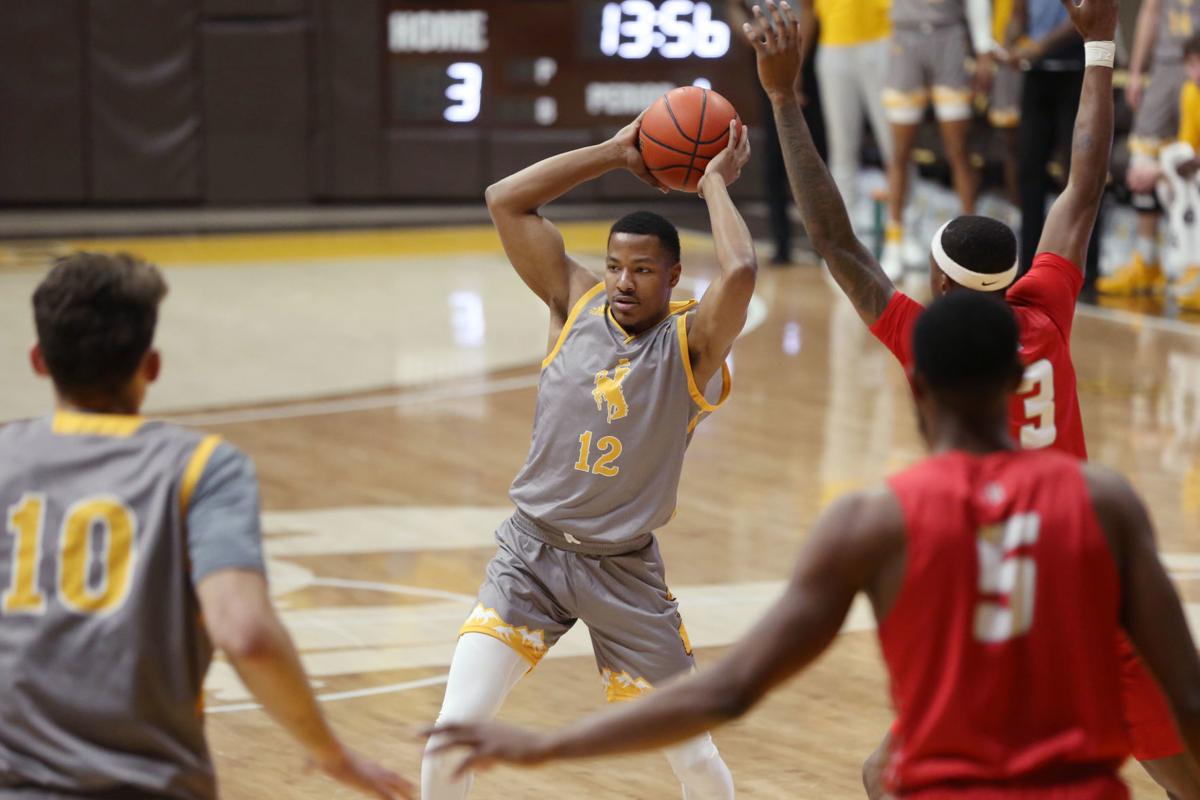 Wyoming player Greg Milton III looks for an open teammate to pass in the game against New Mexico Saturday, December 7, in Laramie. 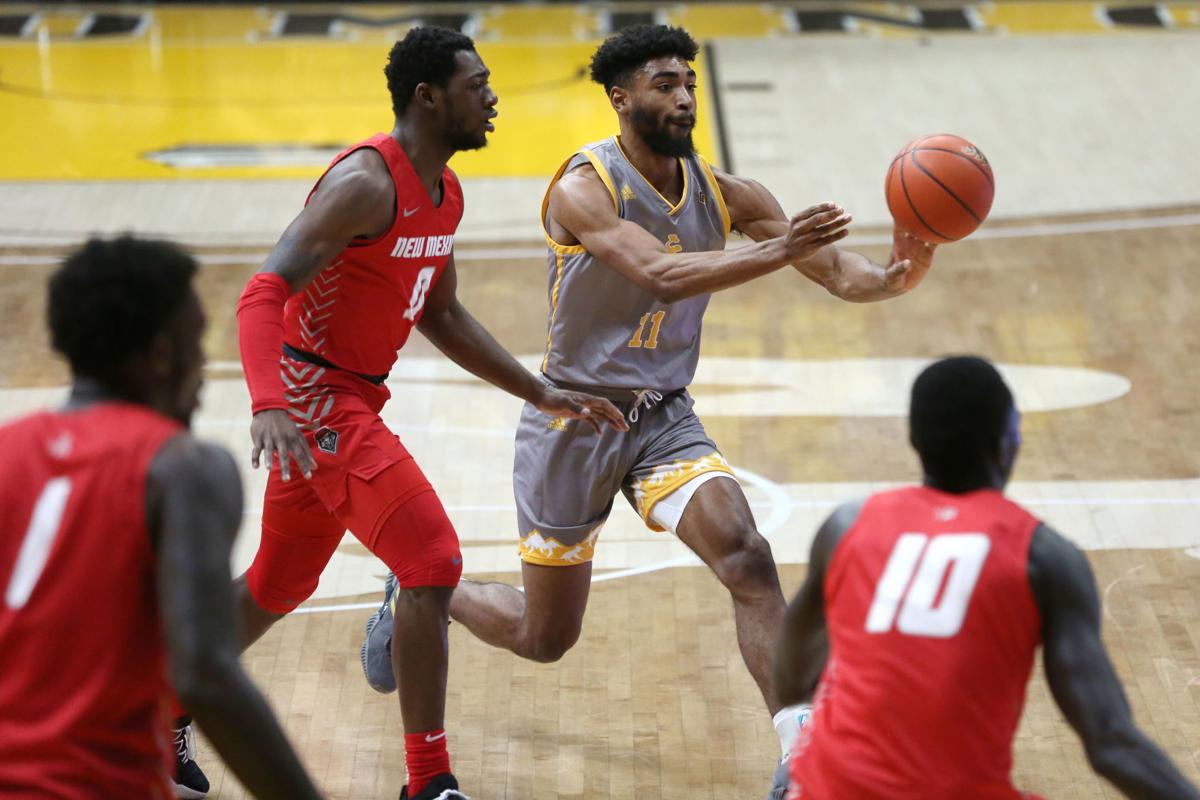 Wyoming's T.J. Taylor passes the ball during the Cowboys' game against New Mexico on Dec. 7 at the Arena-Auditorium in Laramie. 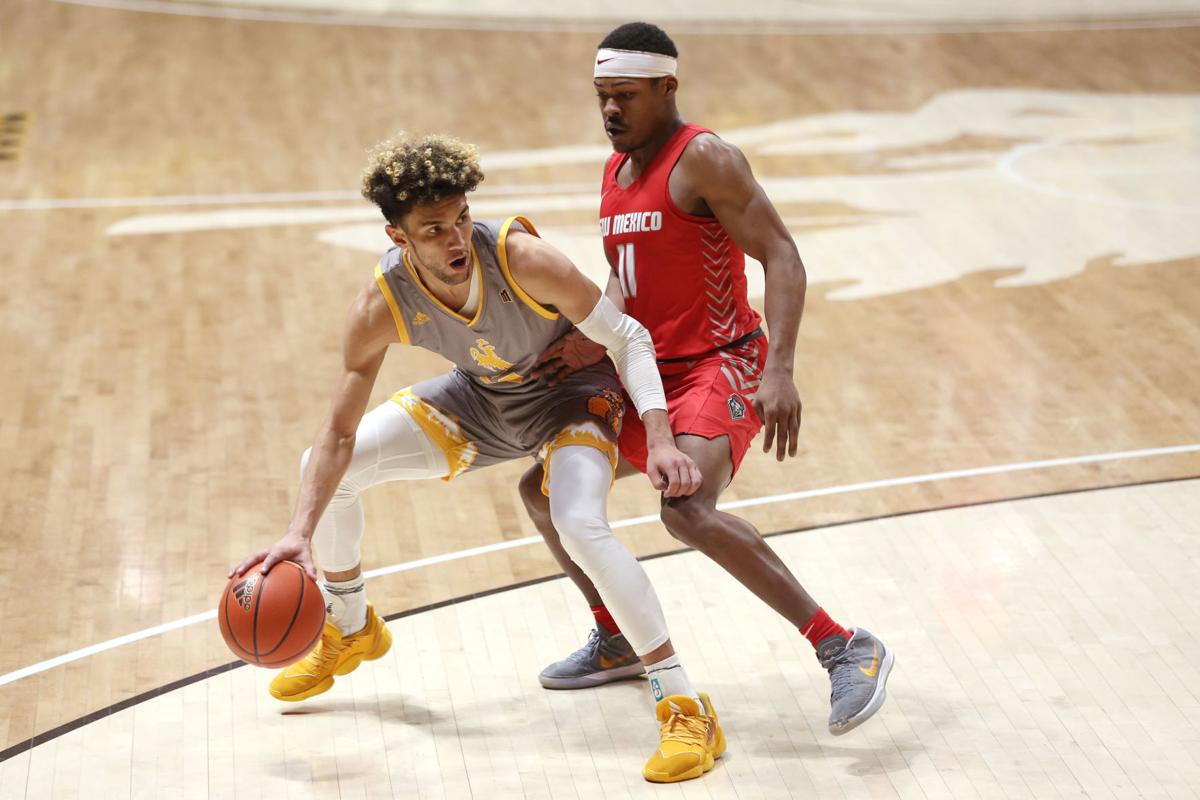 LARAMIE — Wyoming’s defense returned Saturday. At least for a half.

But the shorthanded Cowboys didn’t have many answers for New Mexico. Now they’ll have to wait until next year for another chance at a Mountain West victory.

The Lobos’ inside-out game was too much for Wyoming, and the Cowboys dropped their fourth straight game with a 79-65 loss Saturday at the Arena-Auditorium. It’s the longest skid of the season for the Cowboys, who have a week off before returning to non-conference play next Saturday at home against Northern Colorado. The Cowboys’ MW slate will pick back up on New Year’s Day against Boise State.

Hunter Maldonado led all scorers with 27 points while A.J. Banks and Hunter Thompson chipped in 15 and 12 points, respectively, for Wyoming, which played a majority of the game without its third-leading scorer, Jake Hendricks. The senior guard went down with an elbow injury less than 4 minutes in and never returned.

“That kind of zaps you as well with what he provides for us,” Edwards said. “At this point, you just kind of wish for the best. Great kid. Tremendous competitor. And you just wouldn’t want that to happen for him in his senior year.”

But the Cowboys had far more trouble containing UNM than the other way around. UNM guard Corey Manigault scored 18 points off the bench on 7 of 9 shooting, fellow guards JaQuan Lyle (13) and Makuach Maluach (12) combined for 25 points, and forward Carlton Bragg added 15 points and 15 rebounds for the Lobos, who shot 48.3 percent from the floor. That clip increased to 60 percent in the second half (18 of 30) when the Lobos took control.

UNM stretched its lead to as many 20 with Wyoming having no answers for the Lobos’ frontline, particularly Bragg, who again tormented the Cowboys. After notching a career-high 20 points and 20 rebounds in the teams’ final regular-season meeting last season, the Kansas transfer pulled down nine of his rebounds in the first half and scored 12 of his points in the second.

“Coming out in the second half, I think we were trying to play catch-up because of the lead they had instead of trying to kind of stay the course,” Maldonado said. “I think me and some of the guys, we were just trying to go for the home-run play and not swing from a six-point deficit to a 12-point deficit. They came down, and they handled their offensive business. They were patient.”

UNM (plus 4.9) came into the day in the top half of the MW in rebounding margin while Wyoming was last (minus 7.2), and that trend played out. Bragg’s efforts helped the Lobos pull down 47 rebounds to Wyoming’s 29. Twelve of UNM’s rebounds came on the offensive end.

“That is something that they thrive on,” Edwards said. “That was one of the biggest things going into the game, especially with Bragg. I thought we got in scenarios tonight where Thompson (four fouls) had some foul trouble, so we kind of had to get him out of the game.

“If that occurs, it’s very, very hard because you’re giving them second opportunities to get baskets.”

UNM led 32-21 at the half thanks in part to a late 13-2 run that pushed the Lobos’ lead to as many as 13. Wyoming forced 10 turnovers in the opening 20 minutes and scored 12 points off them, but it was the only consistent off the Cowboys mustered.

Wyoming shot just 31 percent from the field in the first half, including a 22-percent clip from 3-point range. Hendricks fell to the floor in pain with 16 minutes, 20 seconds left in the first half and immediately motioned for a substitute. Nobody for the Cowboys had more than seven points at the break.

“I liked the fight of our guys,” Edwards said. “New Mexico is a talented group. Losing Jake really hurt the process but allowed an opportunity for our younger guys to get out on the floor. It just wasn’t productive in a sense of scoring.”

BEATEN ALL AROUND: New Mexico finished with four double-figure scorers and outrebounded Wyoming 47-29 in handing the Cowboys their fourth straight loss.

LARAMIE — As Wyoming’s men’s basketball team steps back into non-conference play, the Cowboys will be trying to snap a four-game losing streak…

Wyoming player Greg Milton III looks for an open teammate to pass in the game against New Mexico Saturday, December 7, in Laramie.

Wyoming's T.J. Taylor passes the ball during the Cowboys' game against New Mexico on Dec. 7 at the Arena-Auditorium in Laramie.