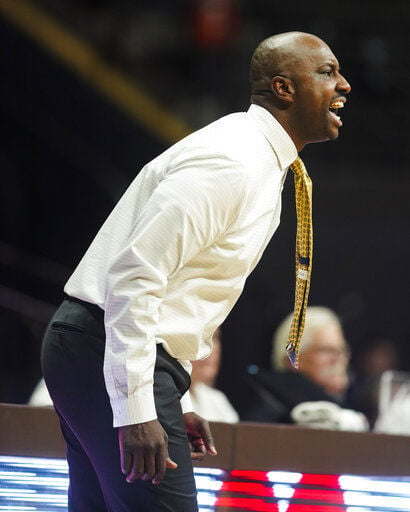 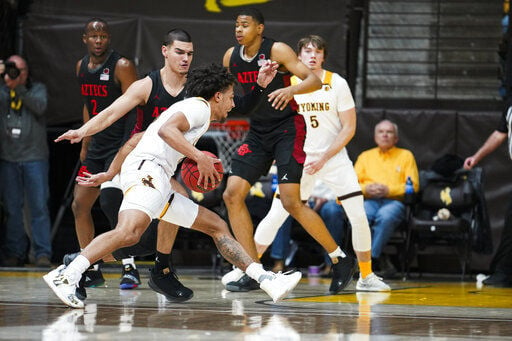 The Cowboys remained the only winless team in league play with its midweek loss to No. 7 San Diego State. Wyoming, which hasn’t won a game against MW competition since March 6 of last year, has lost 20 of its last 24 games in league play dating back to last season.

That includes six straight, a skid Wyoming (5-12, 0-5 MW) will take another crack at ending Saturday when UNLV (8-9, 3-1) visits the Arena-Auditorium. The Cowboys will also look to end a three-game losing streak to the Runnin’ Rebels, who have won five of the teams’ last six meetings dating back to 2016.

UNLV is off to a fast start in league play in head coach T.J. Otzelberger’s first season at the helm, though the Runnin’ Rebels are coming off their first MW loss — a 73-66 setback to Boise State on Wednesday.

Guard Amauri Hardy paces UNLV in scoring at 15.2 points per game while Donnie Tillman and Bryce Hamilton are averaging 11.7 and 11.1 points off the bench, respectively. Forward Cheikh Mbacke Diong is the league’s fifth-leading rebounder with 8.9 rebounds per game, pacing a UNLV team that pulls down a league-leading 12.8 offensive rebounds per game.

The Runnin’ Rebels are second in the MW with 642 total rebounds this season, giving them a distinct advantage on the glass against a Wyoming team that’s last in the league in rebounding margin.

But the Cowboys continue to have just as much trouble finding the offense to go with a defense that’s fifth in the league in points allowed and holding teams to just 27 percent from the 3-point line the last four games. Wyoming continues to rank last in the league in scoring after mustering just 52 points against SDSU. The Cowboys, who are shooting just 41.3 percent from the field and 31.7 percent from beyond the arce, have scored 65 points or fewer in all but one of their five league games.

Hunter Maldonado continues to lead the Cowboys in scoring and rebounding after going for 18 points and seven rebounds against SDSU. Hunter Thompson (15 points) is coming off his first double-figure game in the last five contests, but Wyoming will need more than that, particularly from Jake Hendricks. The senior guard, who’s averaging 9.2 points, had just three — all from the free-throw line — against the Aztecs after stringing together four double-figure games.

True freshmen Kenny Foster and Kwane Marble II may be looked to for help.

In a move Wyoming coach Allen Edwards said he made because Foster is one of the Cowboys’ best five players right now, the 6-foot-5 combo guard got his first career start against the Aztecs and notched seven points and five rebounds in his most extensive playing time of the season. Marble logged a season-high 24 minutes and scored six points on 2 of 4 shooting.

STILL SEARCHING: Wyoming will try to end a six-game losing streak in Mountain West play dating back to last season.

TROUBLE WITH THE REBS: The Cowboys will also try to change their fortunes against UNLV, which has won three straight in the series and five of the last six meetings.