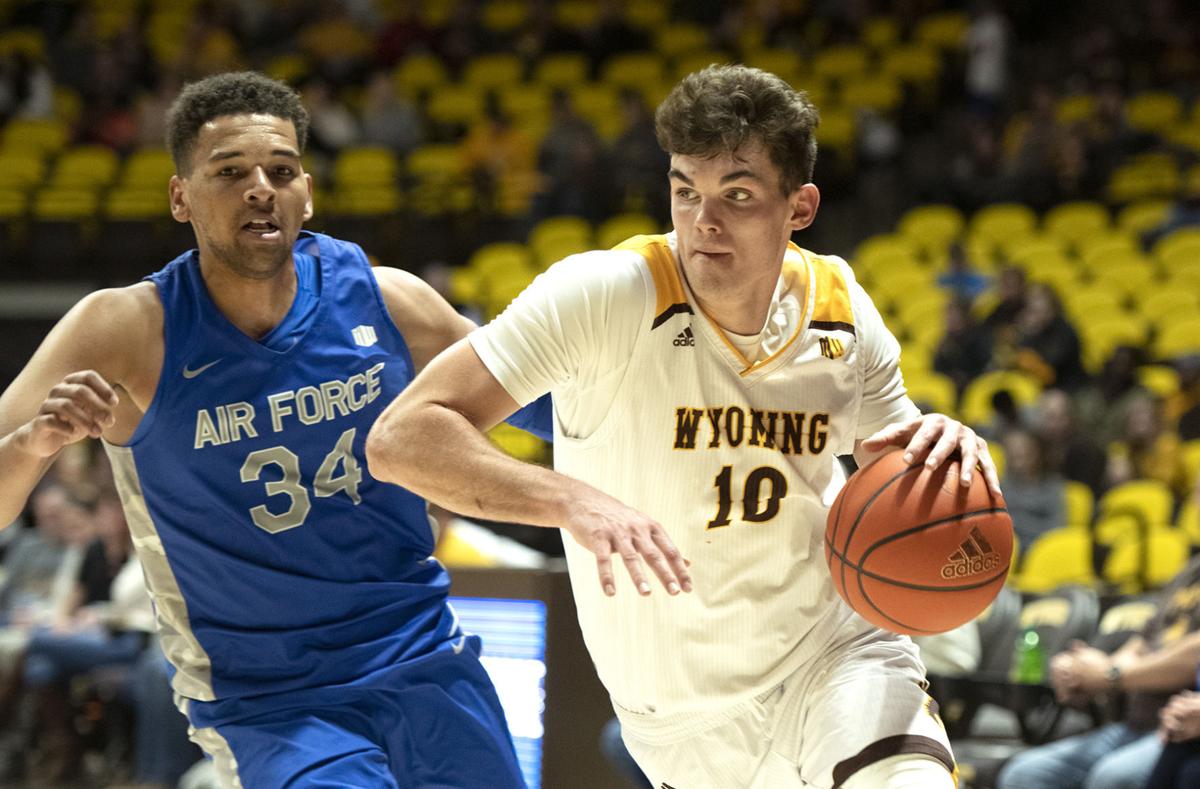 Wyoming's Hunter Thompson drives past Air Force's Ryan Swan during their game last season at the Arena-Auditorium in Laramie. 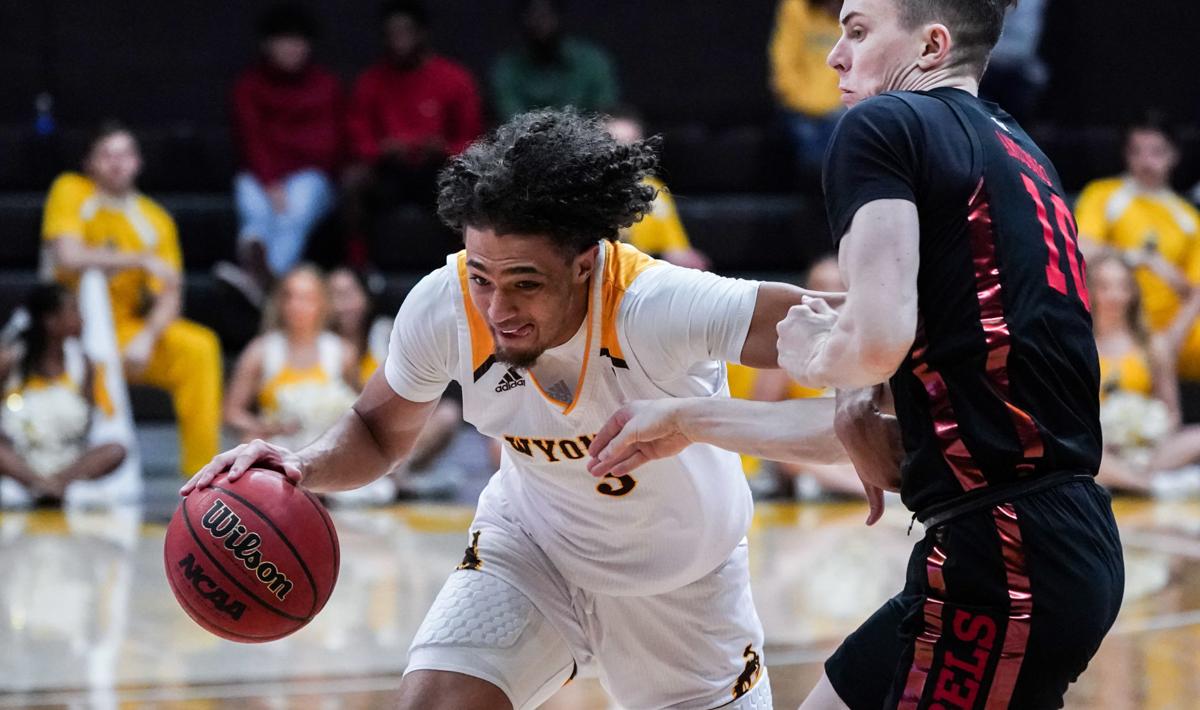 Wyoming guard Kwane Marble II drives against UNLV's Jonah Antonio during their game on Jan. 11, 2020, at the Arena-Auditorium in Laramie. The Cowboys played UNLV just once last season, but the Mountain West is expected to expand from 18 to 20 league games starting with the 2022-23 season.

LARAMIE — Basketball teams in the Mountain West won’t see the change on their respective schedules immediately, but it appears all 11 teams are headed to a true round-robin format within league play.

Count Wyoming coach Jeff Linder among those in favor of the move.

Pending approval from university presidents next month, the MW will implement a 20-game league schedule for its men’s and women’s basketball teams, according to the San Diego Union-Tribune. Teams currently play an 18-game conference slate, and the change wouldn’t go into effect until the 2022-23 season.

Whereas the current unbalanced format leaves each team to play two teams in the conference just once during the regular season, the 20-game schedule would allow every team to play each other twice. But increasing the number of league games eliminates the possibility of scheduling two more quality opponents in the non-conference, which some of the league’s men’s basketball programs oppose as they try to piece together schedules strong enough to warrant at-large consideration for future NCAA tournaments.

Four MW athletic directors, including San Diego State’s John David Wicker, voted against expanding the league schedule. With seven in favor of the proposal, it will be passed on to school presidents, who are expected to vote on it in early June, according to the Union-Tribune’s report.

SDSU, the last Division I team to suffer a loss this past season, and Utah State would’ve been the only MW teams to play in this year’s NCAA Tournament, which was canceled in response to the coronavirus pandemic. Despite winning 23 regular-season games, including non-conference wins over SEC contenders LSU and Florida, Utah State’s triple-digit strength of schedule still had the Aggies squarely on the bubble before they upset SDSU in the MW tournament championship game to earn the league’s automatic bid.

The only league games SDSU and Utah State played against top-75 NET teams this season were against each other. Seven MW teams finished outside of the top 100 of the NET rankings, which are used by the NCAA’s selection committee to evaluate teams’ bodies of work for at-large bids. Three of them, including UW, finished outside the top 200.

The MW has never sent more than five teams to the NCAA Tournament in a season. The league hasn’t produced more than one at-large team since 2015.

Other programs in the MW contend it’s not as easy for them to attract more quality non-conference opponents, particularly when trying not to lose an extra home game. UW, for example, is regionally isolated compared to many of its league counterparts and plays the season during peak winter months when snow and ice can make it difficult to travel.

Linder, who’s entering his first season in charge of the Cowboys’ men’s basketball program, said his support of moving to a 20-game schedule doubles as a happy medium.

“I just know in terms of scheduling, it’s really hard to get teams, especially quality teams, to travel to Laramie,” Linder said. “For us, to be able to get another home game against a quality opponent in the league, that just helps our cause.”

As for next season, Linder said UW has 29 regular-season games tentatively scheduled with the possibility of adding a couple more. One of the Cowboys’ non-conference tilts will be a buy game at Arizona that will net UW roughly $90,000, according to the Arizona Daily Star.

UW will also host Duquesne on Dec. 5 as part of the inaugural MW-Atlantic 10 Challenge, a matchup that had already been announced. Arizona (14) and Duquesne (94) both finished in the top 100 of the NET last season.

Linder declined to discuss specifics since most non-conference game contracts have yet to be signed.

“We should be done (with our scheduling) sooner than later,” Linder said.

The games currently scheduled don’t include a multi-team event (MTE) that Linder is trying to bring to the Arena-Auditorium during Thanksgiving week. The original concept was to hold a round-robin tournament with three other teams over three days, but “really what it’s turned into is just pretty much three buy games,” Linder said.

Linder said nothing regarding the possible event has been finalized.

Closer to the move

Linder is still commuting to Laramie from Greeley, Colorado, where he was the coach at Northern Colorado for four seasons before being hired at UW in March. But that won’t be the case much longer.

Linder said he and his family are set to sell their house in Greeley on June 29 before closing on their new home in Laramie on June 30. But with some of UW’s players set to return to campus this weekend to begin voluntary workouts next month, Linder said he plans to stay in town during the week and drive back to Greeley on weekends before making the permanent move.“With the virus, we couldn’t put our house on the market until the end of April, and we actually waited a little bit longer,” Linder said. “But luckily for us, we’ve got a nice place in a nice area. It had a good price on it to where it was a free-for-all when we put our house on the market. We had about eight offers in a matter of a day. That made it easy, but I’m kind of looking forward to getting up there (to Laramie) full-time.”

Wyoming's Hunter Thompson drives past Air Force's Ryan Swan during their game last season at the Arena-Auditorium in Laramie.

Wyoming guard Kwane Marble II drives against UNLV's Jonah Antonio during their game on Jan. 11, 2020, at the Arena-Auditorium in Laramie. The Cowboys played UNLV just once last season, but the Mountain West is expected to expand from 18 to 20 league games starting with the 2022-23 season.