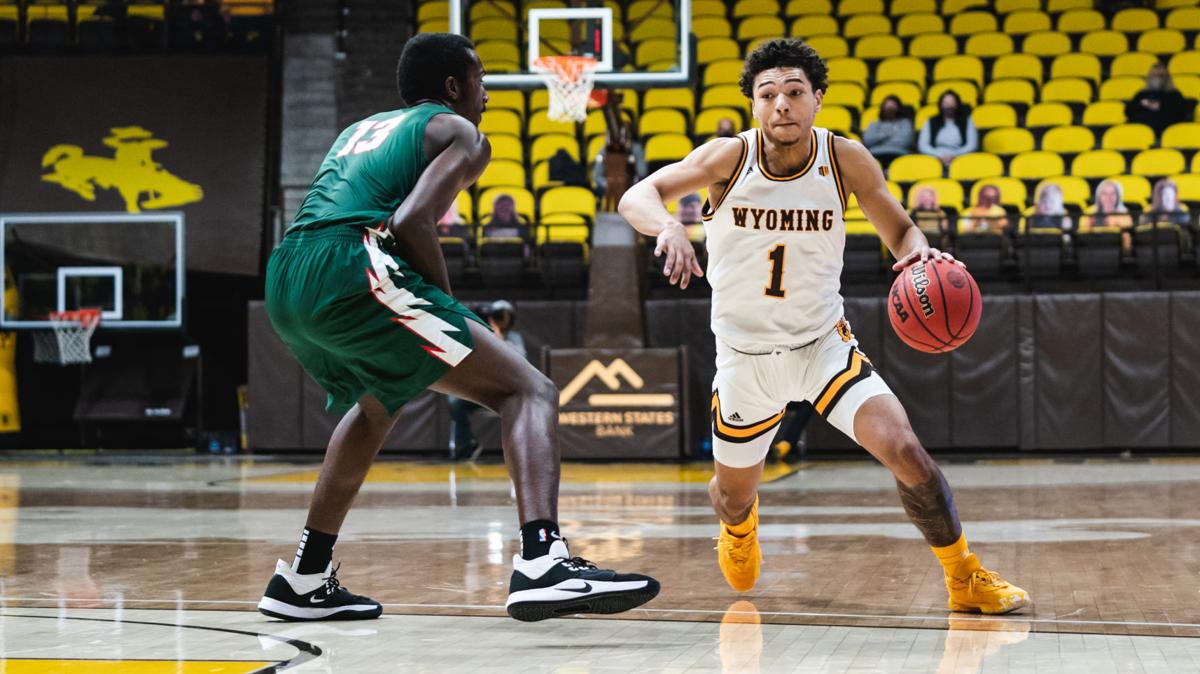 Wyoming guard Marcus Williams looks to drive past Mississippi Valley State's Ronald Williams during their game Saturday at the Arena-Auditorium in Laramie. Williams, a true freshman, led all of UW's newcomers with 20 points in the Cowboys' 97-61 win. 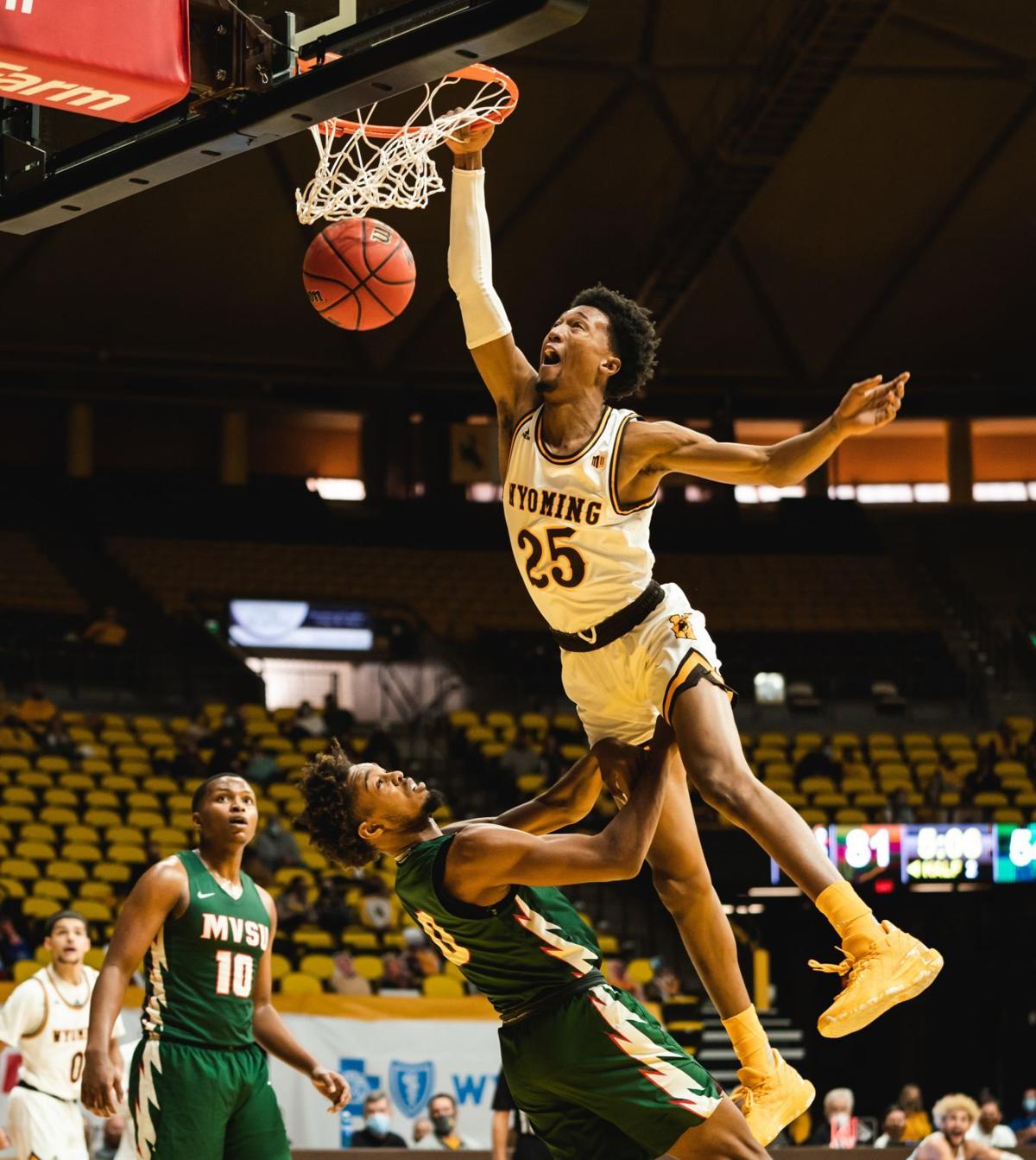 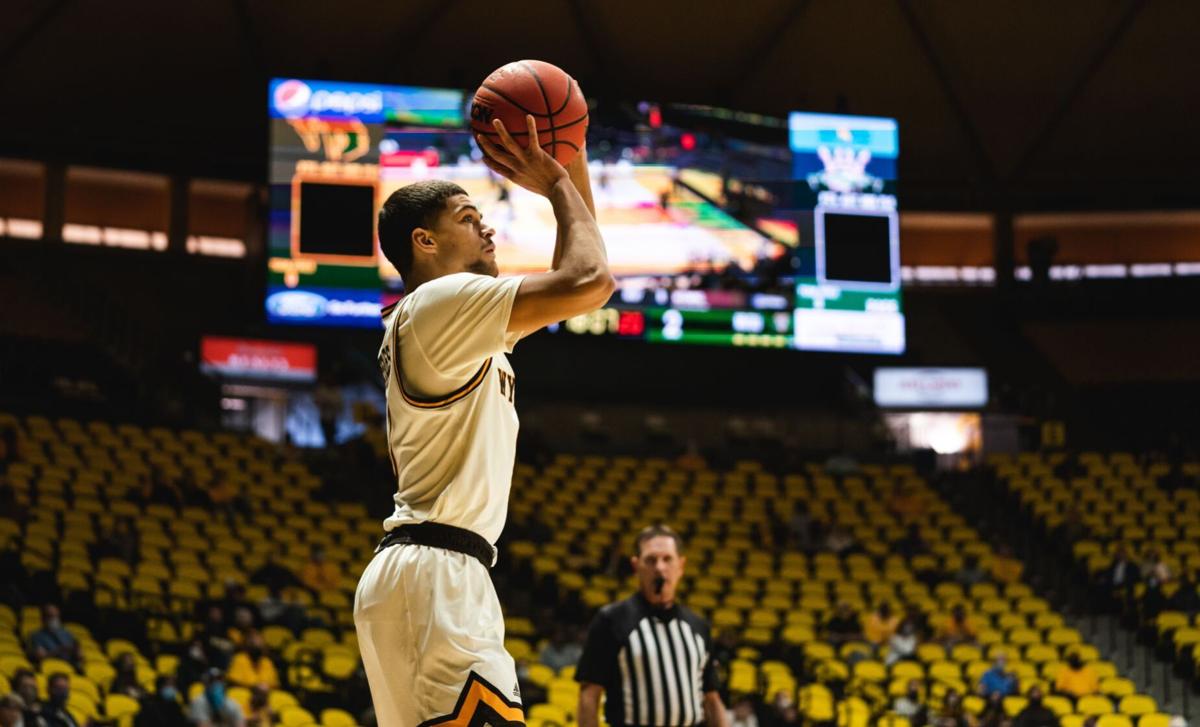 Wyoming's Drake Jeffries lines up a shot against Mississippi Valley State on Saturday at the Arena-Auditorium.

LARAMIE — Marcus Williams took his man off the dribble, got into the paint to draw some more defenders and passed to a cutting Jeremiah Oden along the baseline.

Mississippi Valley State’s Quoiren Walden was in Oden’s way, but it didn’t matter. Oden finished the layup, drew the foul and sank the free throw to finish the old-fashioned three-point play.

And with that freshman-to-freshman connection in the opening 22 seconds, the Jeff Linder era at UW was off and running. The Cowboys’ newcomers were just getting started.

UW also got plenty of contributions from its holdovers in its season-opening rout of Mississippi Valley State on Saturday at the Arena-Auditorium. Stretch big Hunter Thompson matched a career-high with 25 points while junior wing Hunter Maldonado added 10 points, dished out eight assists and grabbed seven rebounds in helping the Cowboys put up 97 points, their most since the 2017-18 season.

But with 66% of UW’s roster comprised of freshmen and junior college transfers, the Cowboys were always going to mix in a heavy dose of newcomers this season. Only one, former American University forward Drew LaMont, had ever played in a Division I game before Saturday.

With Kwane Marble II and Kenny Foster unavailable because of coronavirus-related issues, three of them — Williams, Oden and junior college transfer Drake Jeffries — were in the starting lineup. Five of UW’s seven available newcomers played at least 11 minutes, and the group combined to score 64% of the Cowboys’ points.

Even sophomore forward Eoin Nelson, another junior college signee, made the most of his brief minutes, scoring nine points and grabbing three rebounds in 8:52 on the floor. But it was Williams and Jeffries who had the most impressive UW debuts.

Whether it was in isolation or working off ball screens, Williams proved to be a nightmare for MVSU’s defenders to stay in front of as the 6-foot-2 guard routinely got into the lane for a shot near the rim or a pass when the defense collapsed. He finished with 20 points on 8 of 12 shooting and dished out seven other assists. Equally as impressive was the true freshman’s ball security as evidenced by just two turnovers in more than 33 minutes.

“I told (Williams) before the game not to let the nerves get to him, but I think he did a really good job composing himself and having a really good opening debut for us,” Thompson said. “And that is something we expect from him. We know he’s a freshman He’s going to go through up and downs. ... I think this was a really big confidence booster for him.”

Linder wasn’t surprised by Williams’ performance either given the caliber of competition Williams faced during his high school days in Texas. Linder recruited Williams for more than a year out of Dickinson High, which competes in the 6A classification — the highest in the Lone Star State.

Linder originally signed Williams at Northern Colorado, where he coached for four seasons before landing the UW job in March. Williams and another freshman guard, Xavier DuSell, were released from their National Letters of Intent at that point and followed Linder to UW.

“Playing at the highest level of high school basketball in Texas, he’s playing against high-level, Division I guys, especially when you make it as far as he did in the state tournament,” Linder said. “He’s not scared of the moment.”

Jeffries began his collegiate career at Minot State, a Division II school in North Dakota, before transferring to Indian Hills (Iowa) Community College, where he shot better than 44% from 3-point range last season as a sophomore. Jeffries didn’t hesitate to pull from deep Saturday when he had open looks, making 6 of 15 3-pointers on his way to 19 points.

“I just was super excited to put on that Wyoming on my chest and play for the state,” Jeffries said. “It’s one of the best feelings I’ve ever had honestly. It’s taken me a long time to get here to the Division I level, and I finally made it. I’m glad with where I’m at. It’s just a blessing.”

And while Oden didn’t necessarily fill up the stat sheet — he finished with five points and five boards in more than 26 minutes — the bouncy 6-8 forward gave everyone in attendance a glimpse of his athleticism when he skyed over MSVU’s Treylan Smith for a highlight-reel dunk in the second half.

“(Our freshmen) have got a lot of growing to do,” Linder said. “We’re a long, long way from being any good, but at least we’re taking steps in the right direction.”

Marble and Foster ended last season as starters and could regain those roles once they clear COVID-19 protocols. Linder said he’d be guessing when asked if they might be available for the Cowboys’ next game Monday against what figures to be a much more formidable opponent in Texas Southern, the preseason favorite in the SWAC.

But the newcomers’ first impression has given Linder something to think about going forward.

“We’re going to have to figure out who’s who, what’s what, and what lineups work when we get Kwane and Kenny back,” Linder said. “We’ve got to figure it out and adjust accordingly.”

NEW CONTRIBUTIONS: All seven of Wyoming's available newcomers played in the season opener. The group accounted for 64% of the Cowboys' points in the 97-61 victory over Mississippi Valley State.

HE SAID IT: "(Our freshmen) have got a lot of growing to do. We're a long, long way from being any good, but at least we're taking steps in the right direction." -- UW coach Jeff Linder.

Cowboys' blend of holdovers and newcomers score the program's most points since February 2018.

'Can't let up on anybody': Wyoming using first loss as a learning experience

Complacency and a lack of physicality contribute to the Cowboys' young roster losing out on a winnable game.

The Cowboys' freshman guard ranks in the top 5 in the Mountain West in scoring, field-goal percentage and assist-to-turnover ratio.

Wyoming guard Marcus Williams looks to drive past Mississippi Valley State's Ronald Williams during their game Saturday at the Arena-Auditorium in Laramie. Williams, a true freshman, led all of UW's newcomers with 20 points in the Cowboys' 97-61 win.

Wyoming's Drake Jeffries lines up a shot against Mississippi Valley State on Saturday at the Arena-Auditorium.