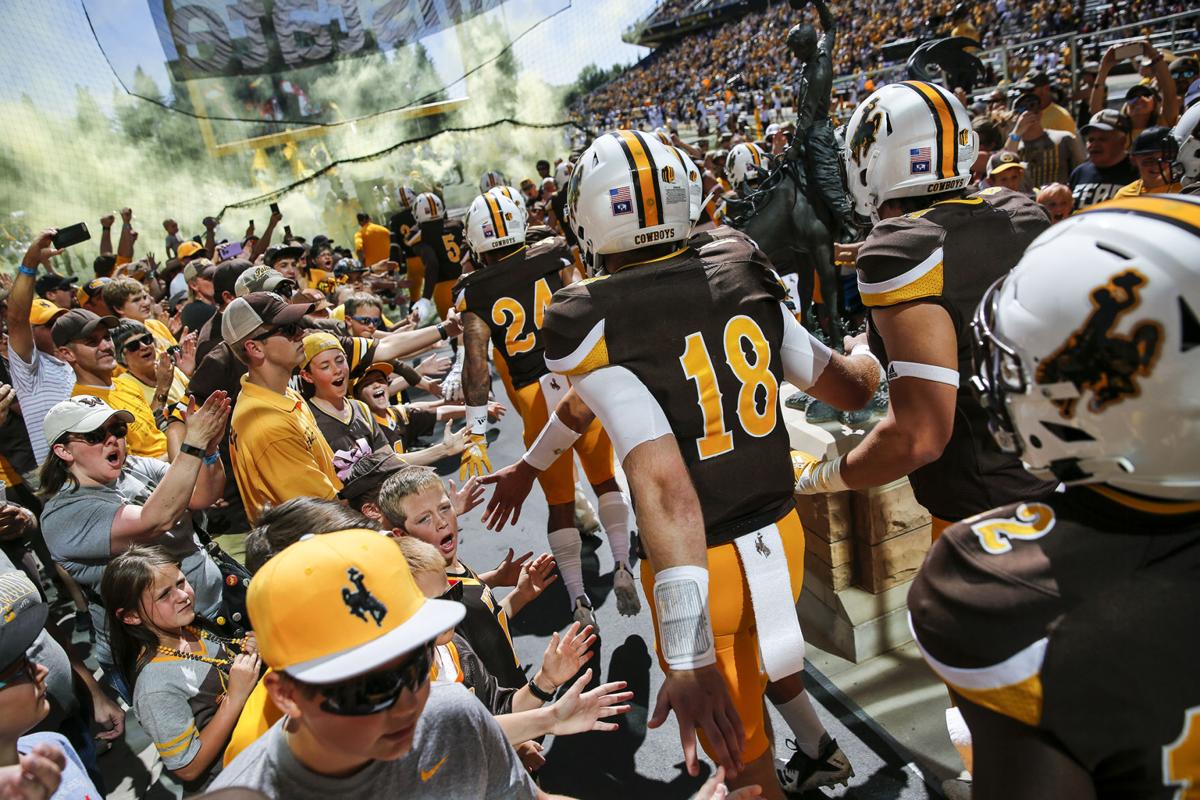 Fans greet Wyoming's football players as they take the field for their game against Wofford at War Memorial Stadium on Sept. 15, 2018, in Laramie. UW is looking for a replacement for Utah on its 2020 schedule, though the Cowboys' other three non-conference games are still on for now. 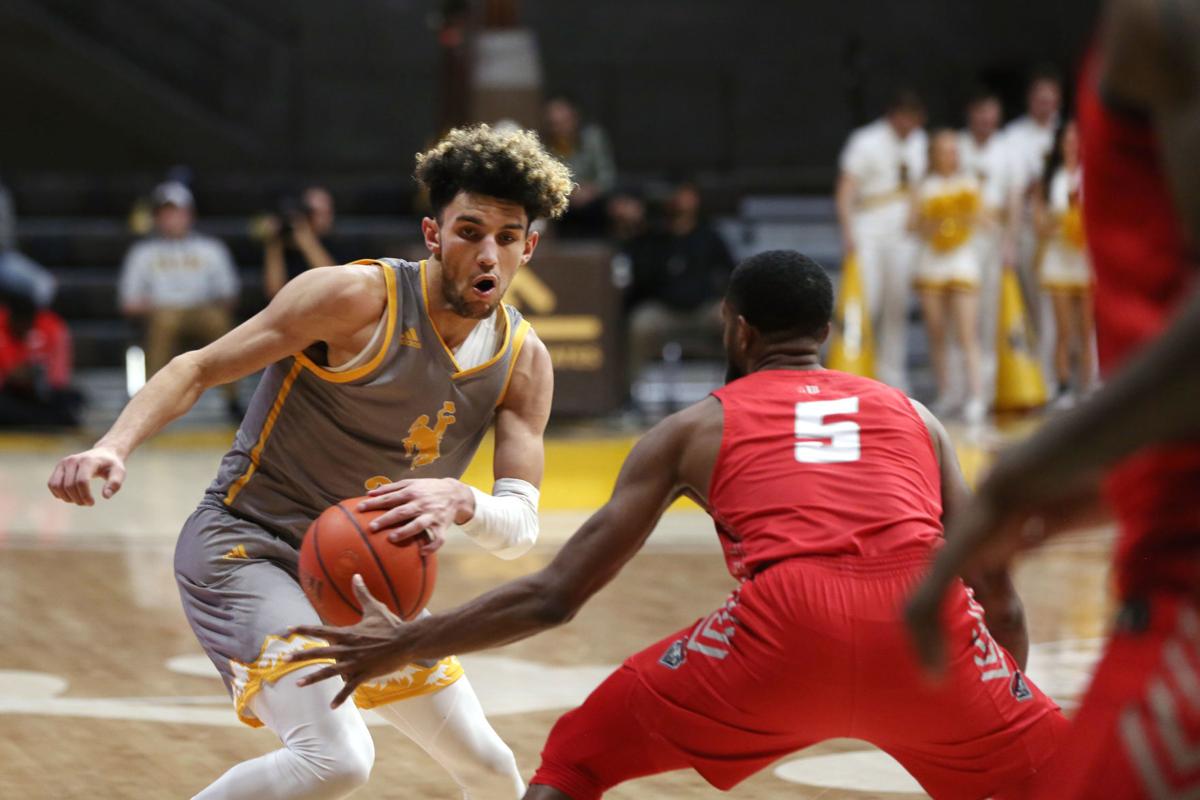 LARAMIE — Tom Burman would like to find a replacement for Utah on Wyoming’s football schedule if it’s possible.

“I’m sitting tight right now just to kind of figure out what’s going to happen with the remaining Power Fives,” Wyoming’s athletic director told the Star-Tribune, referencing the Pac-12, Big 12, Big Ten, Atlantic Coast and Southeastern conferences. “What could happen is the other Power Fives all decide that they’re not going to play non-conference games.”

The Big Ten and the Pac-12 have already made that decision, which is why UW now only has five home games on its schedule instead of six. Utah was supposed to play the Cowboys at War Memorial Stadium on Sept. 19 before the Pac-12’s announcement canceled that trip.

As Football Bowl Subdivision conferences continue to weigh their options regarding the upcoming football season, scheduling is just another addition to the list of uncertainties at a time when the coronavirus pandemic is threatening to do away with it completely. While Group of Five schools in particular need to play as many games as possible in order to minimize the loss of revenue for athletic departments that operate on smaller budgets than their Power Five counterparts, Burman said even the Mountain West has discussed the possibility of going to a conference-only format with fall sports.

“The Group of Fives need to support each other,” Burman said. “If the Group of Five determines that it’s in the best interest of all of us to just play a conference schedule, I will support that. But if you look at what the Big Ten did to the (Mid-American Conference), in my opinion, that’s financial ruin for the MAC schools. And I hope the Big Ten does something to make them whole. But we’ve got to kind of stick together and help each other.”

Although a date hasn’t been set, Burman said UW is “pushing hard” to get the Utah game — the first in a home-and-home series that calls for UW to make the return trip to Salt Lake City in 2025 — rescheduled as soon as possible. As for who could replace the Utes on UW’s schedule this season assuming the Cowboys play a non-conference slate, it would almost certainly have to be a team willing to make the trip to Laramie and one that doesn’t already have a game scheduled for the third Saturday in September.

Should UW have no luck finding another opponent from an FBS conference, Burman said he’s not ruling out the possibility of scheduling another Football Championship Subdivision team. UW already has one on the slate — the Sept. 5 opener against Weber State — and FBS programs are usually only permitted to count one win against an FCS opponent toward bowl eligibility. But the NCAA recently approved a blanket waiver allowing two such games for the 2020 season assuming the FCS teams meet adjusted minimum scholarship requirements.

The problem, Burman said, is that UW is limited in the financial guarantee it would be able to pay to host a team for a one-off. In what Burman called a travel guarantee for each school, UW would’ve paid Utah $250,000 this season while Utah will pay UW the same amount for making the return trip in 2025, according to the series contract obtained by The Salt Lake Tribune.

“That’s what I have to spend,” Burman said. “And if I can get someone to come play us for around that amount of money, we’d be happy to do it. If I can’t, we probably won’t.”

As an example, Colorado State is already scheduled to host UW on Oct. 31. If the teams also agreed to play in Laramie, that game would be a non-conference game. The schools are separated by just 65 miles — easily the shortest trip within the league for both teams — and CSU has already lost a pair of non-conference games with Colorado and Oregon State as a result of the Pac-12’s decision, so it’s not out of the realm of possibility that UW plays its most bitter rival twice if there’s a season this fall.

Not in Burman’s mind, at least.

“I don’t have heartburn about it,” Burman said. “I don’t know how the other ADs feel about it, but you could play a Mountain West school as a non-conference opponent if you wanted. If we’re going to play eight conference games, and if we wanted to play a bus trip against CSU, that’s a really good idea in today’s environment.”

UW’s non-conference games against Weber State, Louisiana (Sept. 12) and Ball State (Sept. 26) are still on for now, but there isn’t much that isn’t fluid. While UW has yet to have a COVID-19 case pop up within its athletic department since student-athletes began returning to campus for voluntary workouts last month, Weber State and Louisiana have both had student-athletes test positive, though the schools didn’t specify whether any of them were football players.

And even if the MW ultimately follows the lead of other conferences and only plays conference games, there may be some league teams on UW’s schedule that need to move a game or opt not to play at all in response to the pandemic, which continues to produce spikes in the number of COVID-19 cases nationwide.

Wyoming had fewer than 900 confirmed cases a month ago but is up to 1,713 as of Saturday. California, which is home to conference members San Diego State, Fresno State and San Jose State, has reported more than 375,000 confirmed cases, the most of any state. Colorado (CSU, Air Force), Nevada (Nevada, UNLV) and Utah (Utah State) have each surpassed 30,000 confirmed cases while New Mexico (New Mexico) and Idaho (Boise State) have each seen their case counts grow to more than 14,000, according to the states’ respective public health officials.

So far, Boise State and New Mexico are the only MW schools that have had any student-athletes, coaches or staffers test positive for COVID-19. If UW isn’t able to find another non-conference opponent, Burman said he’d be content with UW staying at an 11-game schedule since it would give UW some flexibility that he believes will be necessary given all of the unknowns.

With roughly 270 test results back, Wyoming athletics still with no COVID-19 cases

Football isn’t the only sport trying to navigate the difficulties of scheduling amid a pandemic.

In an effort to get back some of the revenue UW’s athletic department is losing as a result of sports being shut down, Burman has asked first-year men’s basketball coach Jeff Linder to try to schedule two buy games, where teams, usually from mid-major conferences, are guaranteed compensation for traveling to play high-major opponents.

UW has landed one against Pac-12 foe Arizona, which will pay $90,000 assuming the game is played on Nov. 20 as scheduled. But with seemingly every program looking for a payday and not much money to go around given the current financial climate, Burman said the prospects of getting a second buy game are grim.

“We’re still looking, but we have not found one and we’re becoming pretty pessimistic,” Burman said.

Burman said he’s gotten word that more conferences out west are likely to do away with non-conference games in the fall, which would mean fewer soccer and volleyball competitions. UW women’s soccer is slated to open its season with an exhibition at Kansas State on Aug. 9 while the volleyball team, which normally begins the season in late August, has yet to release its schedule.

“We’ve got fewer games in both of those sports already,” Burman said. “So there will come a time probably in mid-to-late August where we just announce new schedules. Our schedules will be relatively similar, but in volleyball, we might be down seven or eight games. I mean, who knows?”

A REPLACEMENT?: Wyoming will try to add another non-conference football game to its 2020 schedule after its game against Utah was canceled earlier this month.

NO EASY SELL: UW men's basketball is still looking for a second buy game after adding Arizona to its 2020-21 schedule earlier this year, but that may not happen given the current financial climate in college athletics.

HE SAID IT: "I don’t know how the other ADs feel about it, but you could play a Mountain West school as a non-conference opponent if you wanted." -- UW athletic director Tom Burman.

Wyoming still has no plans to cut sports amid revenue loss

Travel expenses are among the budget cuts UW's athletic department is making in response to the coronavirus pandemic.

Rivals have non-conference football games that could be replaced.

Weekly COVID-19 testing could be required during football season, which 'does not bother' Wyoming

Fans greet Wyoming's football players as they take the field for their game against Wofford at War Memorial Stadium on Sept. 15, 2018, in Laramie. UW is looking for a replacement for Utah on its 2020 schedule, though the Cowboys' other three non-conference games are still on for now.