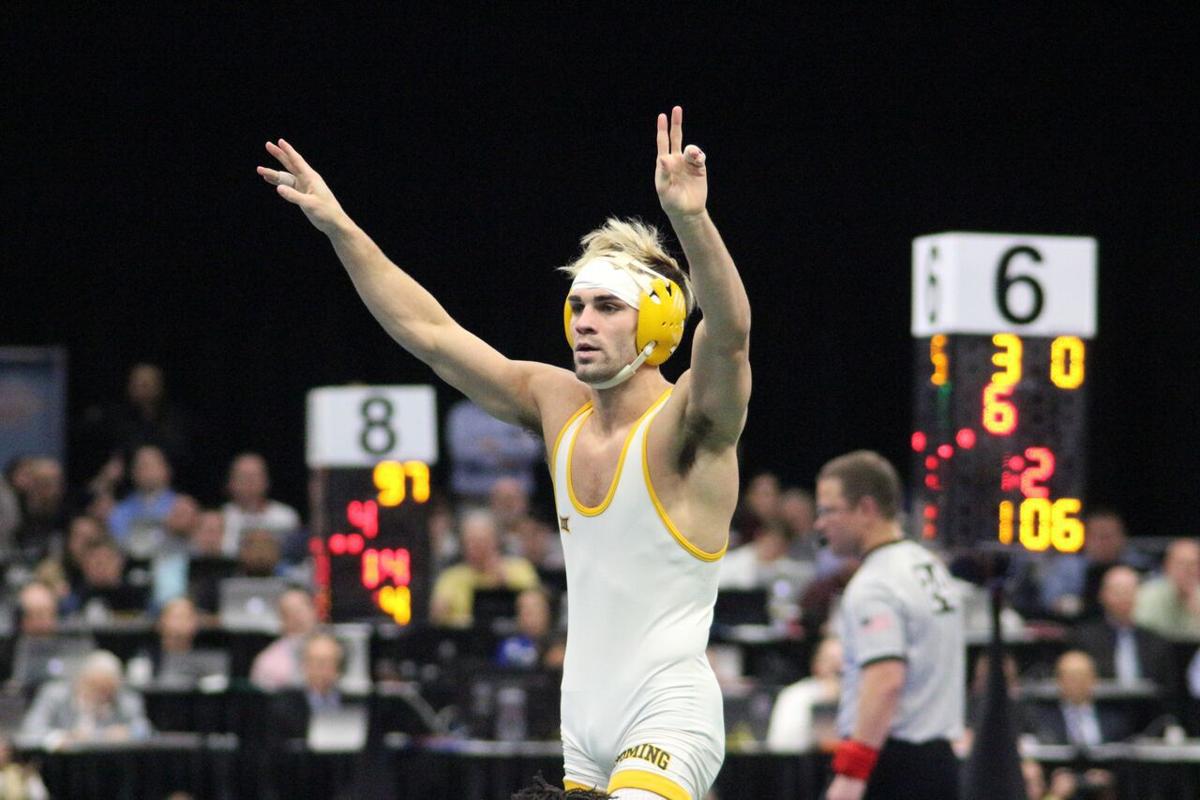 Wyoming wrestler Bryce Meredith celebrates after winning his semifinal match at the 2018 NCAA Championships in Cleveland. 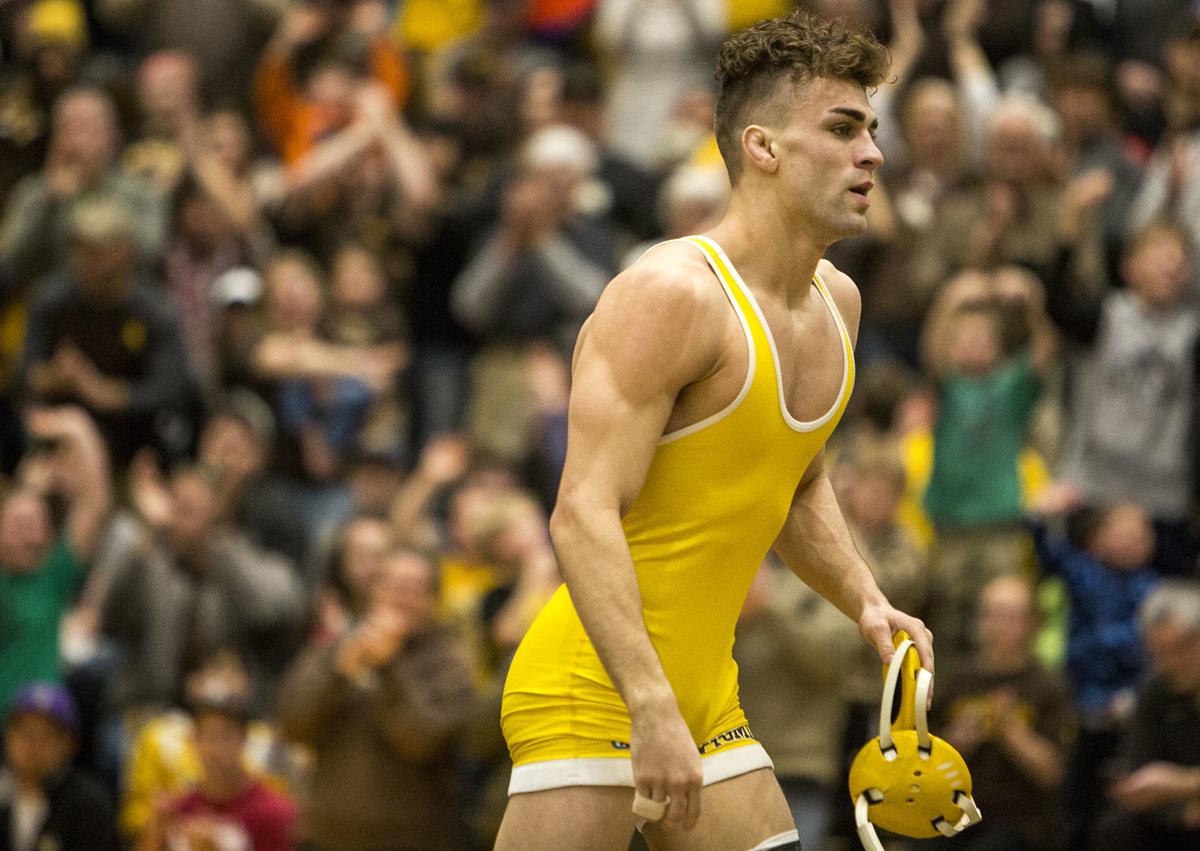 Former Wyoming Cowboy Bryce Meredith takes off his headgear after finishing his match against Oklahoma’s Mike Longo on Feb. 4, 2018 at the UniWyo Sports Complex in Laramie. 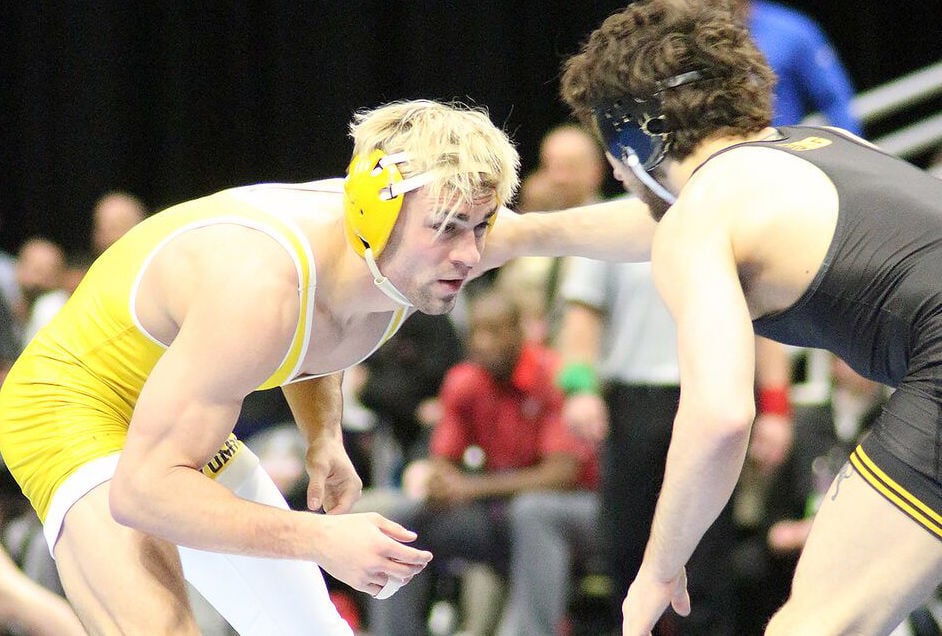 Wyoming's Bryce Meredith competes against Iowa's Vincent Turk in the second round of the NCAA Division I Championships on Thursday in Cleveland.

CLEVELAND — Two years later, Bryce Meredith was back where he wanted to be. For the second time in three years, he was on college wrestling's biggest stage, and this time he held a lead.

The Wyoming senior wrestler had ridden a No. 1 seed, unanimous No. 1 ranking and 29-match winning streak to the 141-pound final against Cornell's Yianni Diakomihalis at the NCAA Championships. A third-period escape and takedown gave Meredith the lead that Diakomihalis had defended for nearly 2 minutes.

But with Meredith's right arm wrapping the freshman phenom's right leg, Diakomihalis spun and flipped the senior, earning four points with the move. Meredith would not break free until his collegiate wrestling career had come to an end.

Diakomihalis, the only blemish on Meredith's 33-1 pre-match record, denied Wyoming what would have been its first NCAA championship in any sport in more than a decade, 7-4.

Meredith, a Cheyenne native, ends his career as a three-time all-American, twice a runner-up.

In the first minute of action, both Meredith and Diakomihalis drew noise from the Quicken Loans Arena crowd by putting the other in danger of a takedown, but both spun away. Meredith, wrestling with a bandage around his head because of a cut dating back to the second round, sustained a new cut on his eye that paused the match 1:55 into the first period.

That period ended without a point, and Diakomihalis (34-1) chose to begin the second in a neutral position. He scored immediately on a takedown to go ahead 2-0. Meredith quickly escaped, then tied the score with another escape point after starting the third period on the mat.

Meredith managed a takedown with 1:21 to go, giving him a lead that became 4-3 once Diakomihalis escaped. But after Meredith grabbed Diakomihalis' leg on a shot, trying to keep his lead for good, Diakomihalis flipped Meredith for a takedown at the 17-second mark and a two-point near fall at the 12.

"I can't believe I hit that on him," Diakomihalis said afterward.

Said Wyoming head coach Mark Branch: "He set the corner, and Bryce came up to get himself in a better position. It was pretty much the same thing that Bryce did in the semifinals, but he didn't get the cradle locked out. That was the difference."

Meredith never broke free after that.

"I mean, honestly, he is a Greek freak," Meredith said. "His joints are unbelievable. You're in a position, and the way he rolls his hips and knees out of stuff, it's just unbelievable. It's going to take him very far in life. It already has. He's a freshman national champ."

Meredith had said before leaving for Cleveland, that it would "break (his) heart" if he returned home without a national title. The devastating nature of Saturday's conclusion isn't likely to change that.

Meredith had said the same thing about his Dec. 2 loss to Diakomihalis, a sudden victory defeat.

"It really did break my heart a lot more than losses have in the past," he said Friday.

After his match Saturday night, Meredith said, "I mean, I'm a two-time finalist. I'm a three-time top-four guy. My freshman year, I didn't qualify. So, the success is in the pudding there.

"Honestly, I have a great life. I have a lot of family and friends. I'm just thankful."

Dick Ballinger remains the only Wyoming wrestler to win an individual national championship, having won in 1960. Like Meredith, Ballinger finished second and fourth in his sophomore and junior seasons, respectively.

Meredith ends his Wyoming career tied for second in program history with 12 wins at the NCAA Championships. He shares that mark with Reese Andy, the last Cowboy to wrestle for a national championship before Meredith did so in 2016, falling 3-2 to Oklahoma State's Dean Heil. Saturday night was the ninth time that a Wyoming wrestler had competed in an NCAA championship.

"An exciting match for the fans, but heartbreaking, obviously," Branch said. "But Bryce has obviously left a legacy on our program, and he's done so much for our program. He has nothing to be ashamed of, because win or lose, he goes out there and he throws everything out there. He didn't hold anything back.

"So, he's not a conservative guy, to go out there and play it safe. I'm proud of him and all that he's done for himself and his family and our program."

Meredith was a four-time state champion at Cheyenne Central. He competed for North Carolina State at 133 pounds his freshman season before returning to the his home state.

Meredith began his tournament with a string of wins against unseeded opponents, 4-1 over Cal Poly's Colton Schilling, 5-2 over Iowa's Vincent Turk and a pin in 1:39 against Eastern Michigan's Sa'Derian Perry. Perry wound up earning all-American honors with an eighth-place finish.

In the semifinals, Meredith defeated Ohio State's Joey McKenna with a 1-0 standoff. A win over McKenna, then a Stanford wrestler, also sent Meredith to the championship match in 2016, where he fell to Oklahoma State's Dean Heil, 3-2, at Madison Square Garden.

Meredith was one of two Cowboys to earn all-American status in Cleveland, along with freshman 133-pounder Montorie Bridges.

Bryce Meredith was an All-American at Wyoming. Now he hopes to eventually be an Olympian.

The Cheyenne native has Tokyo — and a future MMA career — in his sights.

Wyoming wrestler Bryce Meredith celebrates after winning his semifinal match at the 2018 NCAA Championships in Cleveland.

Former Wyoming Cowboy Bryce Meredith takes off his headgear after finishing his match against Oklahoma’s Mike Longo on Feb. 4, 2018 at the UniWyo Sports Complex in Laramie.

Wyoming's Bryce Meredith competes against Iowa's Vincent Turk in the second round of the NCAA Division I Championships on Thursday in Cleveland.