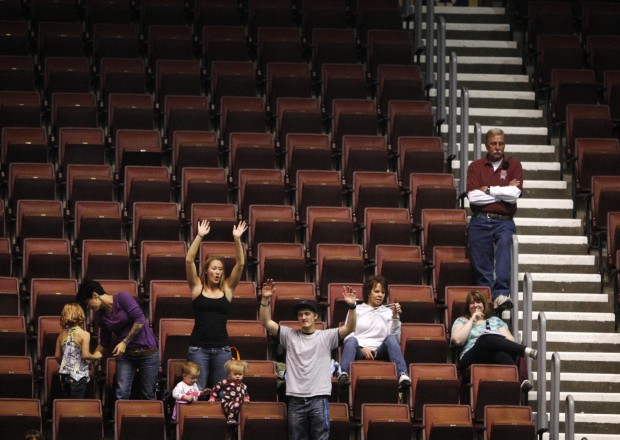 Fans wave for free shirts near the end zone during the Wyoming Cavalry home finale against Cedar Rapids Titans May 31, 2013 at the Casper Events Center. 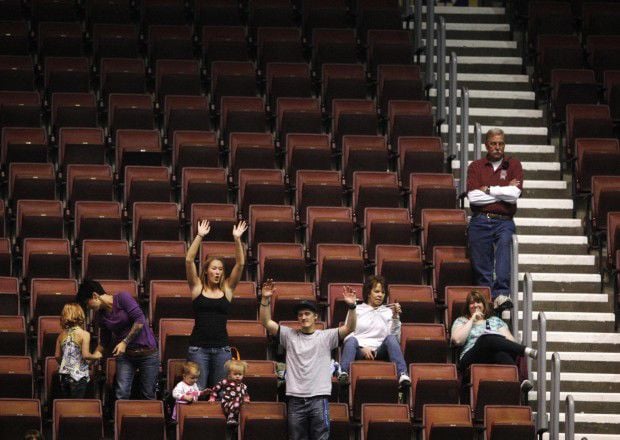 Fans wave from the end zone seating during a Wyoming Cavalry game with the Cedar Rapids Titans on May 31, 2013 at the Casper Events Center. The Cavalry have ceased operations after 15 years in the face of declining attendance.

There was cake. And there were dozens of fans that stuck around after the game for the chance to bid on players’ jerseys, which the players removed from their sweaty bodies to autograph for the lucky (?) winner.

The only things missing Friday at the Casper Events Center were a boisterous crowd – there couldn’t have been more than 1,200 people in attendance – and a victory for the home team as the Cedar Rapids Titans overcame a first-half deficit to earn a 67-55 victory against the Wyoming Cavalry.

The loss dropped the Cavalry to 1-11 on the season, their third as a member of the Indoor Football League. With just two road games remaining, the Cavs will finish with a losing record for the second consecutive season and just the fifth time in 14 years.

Make no mistake, though, despite rumors to the contrary, the Cavs expect to be back for a 15th season.

“Absolutely,” Cavs general manager Mike Layton said after the game. “This was the most drama-free season we’ve ever been a part of.”

Unfortunately, it’s also the most victory-free season the Cavs have been a part of.

Part of that is attributable to a complete overhaul of the coaching staff and roster after last year. Longtime coach Dan Maciejczak and veteran players Matt Strand, Dante Dudley, Robbie Klinetobe, Jasonus Tillery, Domata Peko, BJ Charlton and James Everage – names and faces Cavs fans had come to know – either retired or decided to continue their playing careers elsewhere in recent years. They were part of a core group that led the Cavs to four consecutive indoor football championship game appearances from 2007-10.

In their place are first-year head coach Ryan Lingenfelder and 18 players that were new to the indoor game.

Obviously, growing pains were to be expected.

The Cavs struggled early, losing their first four games by an average score of 59.3 to 22.5, before upending the Tri-Cities Fever 36-34 on April 5 for their only victory to date.

“I don’t think our record really indicates the type of team we are,” Lingenfelder said. “Our main goal was at the end of the game to make sure we had a chance to win.”

The Cavs did that. Even though the losses continued to mount as the season progressed, the Cavs at least were competitive. In its last seven games, Wyoming either had the lead or was within one score in the second half.

That was the case again Friday as the Cavs and Titans traded touchdowns throughout the second half, with Wyoming pulling to within 60-55 with 1 minute, 41 seconds remaining on Brendan Crawford’s 1-yard touchdown run. But Josiah Powell’s subsequent onside kick traveled just two yards and the Titans scored two plays later to put the game away.

So what does the future hold for the Cavs?

Layton insists that the team is perfectly content in the nine-team IFL, which has hopes of expanding before next season. It should be noted, however, that the Cheyenne Warriors, who pulled out of the IFL prior to the start of the season and were being mentioned as a possible addition for next season, ceased operations this week.

While the team should be better next season, what remains to be seen is whether the fans return. After five years of covering the team, I’ve noticed a significant drop in attendance the past couple of seasons.

While the win-loss record no doubt plays a part in that, I couldn’t help get the feeling that, outside of the new names on the backs of the jerseys, I had seen all of this before. From the extended halftime show to the same old games involving fans during timeouts to the same audio clips (“They killed Kenny!”) played over the loudspeakers, there’s a sense that the Cavs are playing to the same crowd they’ve been playing to for years.

The problem is the crowd’s getting smaller with each passing year.

And I didn’t even get any cake.

Bills quarterback Josh Allen further clarified the “football stuff” that was happening at the bottom of the pile between he and Dolphins defensive tackle Christian Wilkins during Sunday’s game.

Dolphins' Christian Wilkins on scrap with Josh Allen: 'With alpha males, that’s how it goes'

Buffalo Bills quarterback Josh Allen got a 15-yard penalty for unsportsmanlike conduct when he pulled off the helmet of Dolphins defensive tackle Christian Wilkins in the fourth quarter of Buffalo's 21-19 loss.

Joe Burrow tossed a late 2-yard touchdown pass to Hayden Hurst to seal a 27-15 win for the Cincinnati Bengals over Miami. The game was marred by the horrific sight of Dolphins quarterback Tua Tagovailoa being taken off on a stretcher. Tagovailoa was chased down and slammed to the turf by Cincinnati’s Josh Tupou with about six minutes left in the first half. He was taken to a hospital with reported head and neck injuries. Vonn Bell’s interception of backup quarterback Teddy Bridgewater with three minutes left in the game set up the Bengals’ final drive.

Inside 'ManningCast': How Peyton and Eli Manning are changing the way we watch sports

DENVER — The nondescript one-story warehouse sits just off a busy street south of downtown. Motorists pass by the thousands and seemingly no one gives the place a second glance. If only they knew what happens on the other side of those corrugated metal walls. Not only is the 10,000-square-foot building home to a private collection of 18 lacquered muscle cars, but it's also where another No. 18 ...

John Romano: Nothing wrong with the Bucs that Rob Gronkowski can’t fix

TAMPA, Fla. — Make the call. Bend the knee. Open the vault. Do whatever it takes, but for goodness’ sake, find a way to get these crazy kids together again. Promise midweek vacations. Tease with more endorsements. Make it clear that he, alone, can rescue the Bucs. Just find a way to get Rob Gronkowski back in Tom Brady’s huddle. You can see it, right? There is nothing wrong with Tampa Bay’s ...

This is Amazon’s first year broadcasting NFL games, so you’d expect a couple of bumps along the way. But the tech giant’s Thursday Night Football broadcast received a healthy dose of criticism over its coverage of Tua Tagovailoa’s injury. During the second quarter of the Cincinnati Bengals’ 27-15 win over the Miami Dolphins, Tagovailoa was taken off the field on a stretcher and hospitalized ...

Sam McDowell: How this late-game error, which we glossed over, was costly in KC Chiefs loss to Colts

In the southwest end zone at Lucas Oil Stadium, a football stuck in the hands of rookie tight end Jelani Woods, a touchdown that supplied the Indianapolis Colts a three-point lead. Some 50 yards away, as Chiefs quarterback Patrick Mahomes glanced at the clock from the visiting sideline, the news grew worse. Twenty-four seconds. That’s it. All he had. It was hardly enough time to change the ...

Several college football games and one NFL game could be affected by Hurricane Ian this weekend as the storm bears down on Florida.

Fans wave for free shirts near the end zone during the Wyoming Cavalry home finale against Cedar Rapids Titans May 31, 2013 at the Casper Events Center.

Fans wave from the end zone seating during a Wyoming Cavalry game with the Cedar Rapids Titans on May 31, 2013 at the Casper Events Center. The Cavalry have ceased operations after 15 years in the face of declining attendance.