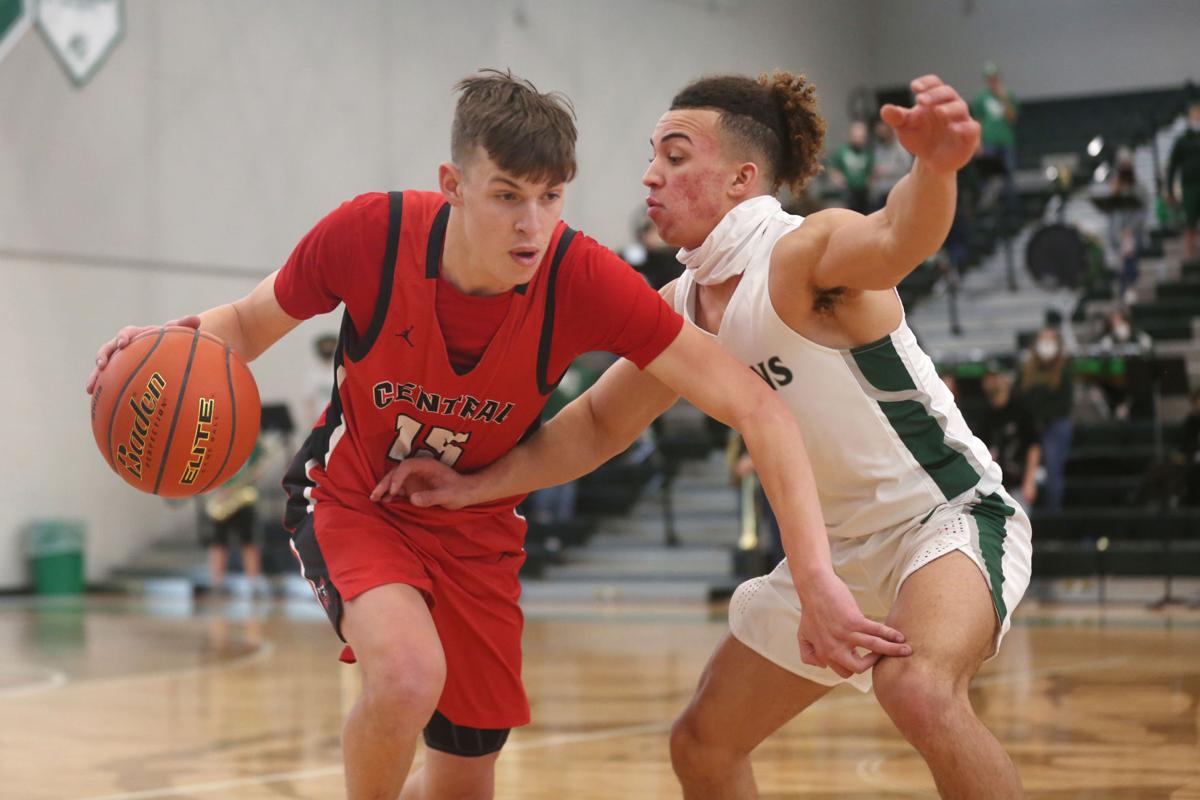 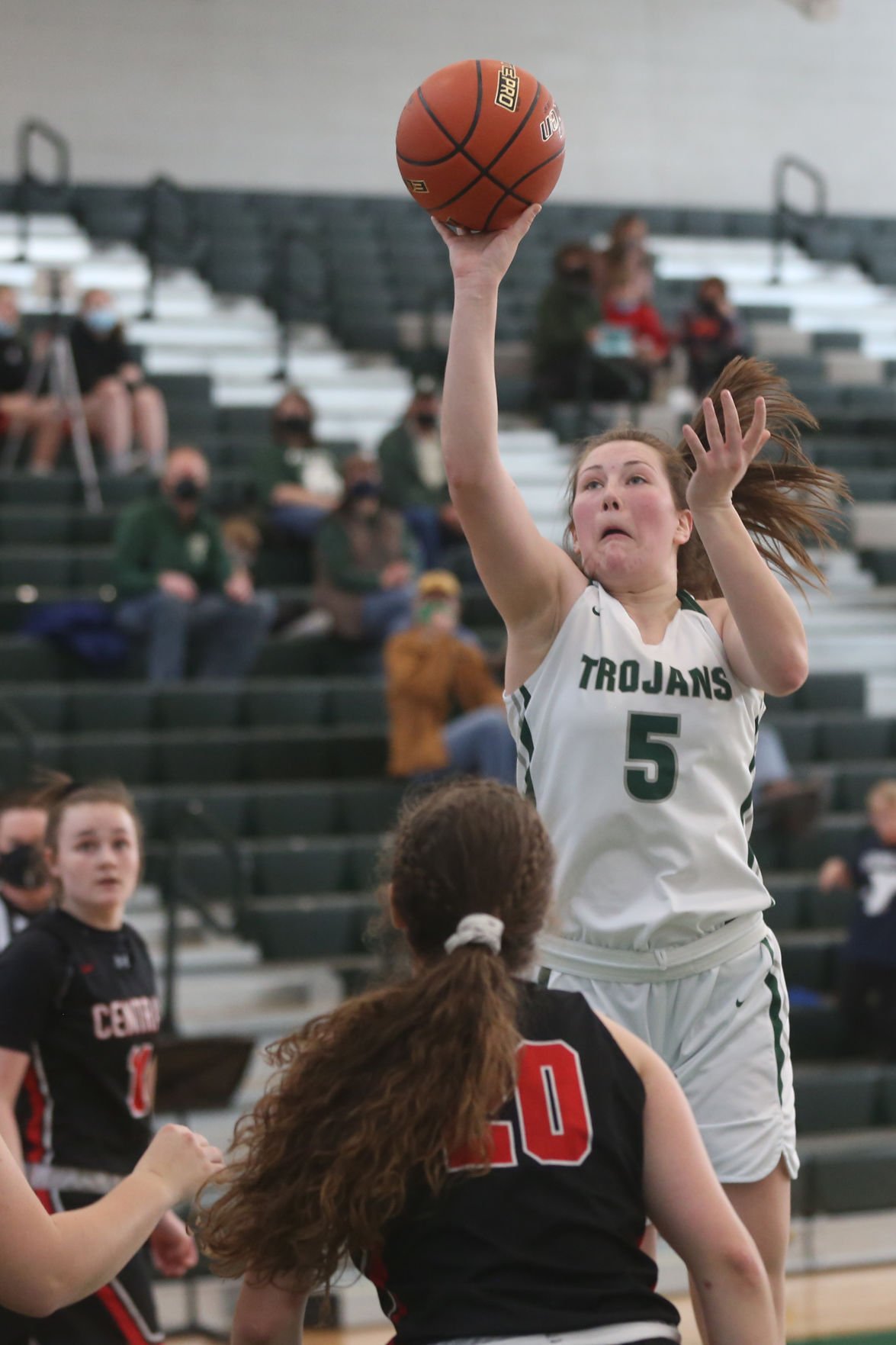 Kelly Walsh's Logann Alvar shoots a jumper in the Trojans' game against Cheyenne Central on Saturday at Kelly Walsh High School in Casper.

After struggling in the second half of its 55-46 loss at Sheridan on Friday, the Cheyenne Central boys basketball team needed to regroup. The Indians did just that Saturday afternoon, pulling away in the third quarter for an eventual 64-49 victory at Kelly Walsh.

"This was a tough road trip," Central head coach Tagg Lain said. "We were going to come down here (Friday) night, but with the roads being bad we ended up staying in Sheridan and leaving in the morning.

"Thankfully we were able to come out today and make some shots."

Central (10-2) has struggled from behind the arc this season -- it entered the weekend shooting just 18.7 percent on 3-pointers -- but senior twins Brady Storebo and Brock Storebo each made two 3s and Nathaniel Talich added another.

"We have struggled shooting 3s this year," Lain admitted. "But we were able to knock some down and that kind of loosened things up for us in the middle."

With Kelly Walsh (2-10) forced to guard the perimeter, the Central guards were able to find 7-foot senior center Lawson Lovering for easy shots at the rim. The University of Colorado signee, who finished with 17 points, also did some damage at the free-throw line where he finished 5 of 6.

Brady Storebo not only hit from distance, but powered his way to the rim as he scored a game-high 23 points. Talich added 12 points and Brock Storebo had eight.

The Tribe took an early 14-6 advantage on a 3-pointer and a mid-range jumper from Brady Storebo before the Trojans' Caleb Cockrum hit a 3-pointer at the first-quarter buzzer to make it 14-9. Two more triples from Gunnar Browning and Caden Allaire to begin the second quarter allowed Kelly Walsh to take a 15-14 lead.

It didn't last, though, as Brock Storebo knocked down a 3 and Brady Storebo followed with an old-fashioned three-point play. Brady added two more points on a driving layup and Lovering closed the half with four points for a 27-22 lead.

"If we can be threats on the outside, it really opens the inside for Law," Brady Storebo said. "And if there's just one guy guarding him insidee, Law is one guy that is going to beat them every time."

Central opened the second half with a 10-2 run to take control before KW's Siope Paleplae stopped the bleeding with a 3-pointer. But the Storebos scored eight points during another 10-2 Central run to leave little doubt but the final score.

Despite the loss, Kelly Walsh head coach Randy Roden remained upbeat. The Trojans, who won state championships in both 2017 and '19, are in serious danger of having just their second losing season in 10 years.

"I don't know if I've ever had this much fun coaching," Roden said. "The kids continue to show great effort but we just don't have the size we need to compete with some teams, especially a team like Central.

"We played well in stretches today, but we just couldn't string much together," he added. "That's kind of been our deal all year. But I do think we're getting closer and closer."

Browning led the Trojans with 15 points, with Allaire pitching in eight and Palepale seven.

The Trojans host Laramie on Friday before playing at Cheyenne South on Saturday. Central, meanwhile, host Gillette and Thunder Basin next weekend.

The Kelly Walsh girls made a couple of runs at Cheyenne Central, but ended up on the short end of the 60-44 decision.

The Trojans (2-10) tied the game at 27-all late in the first half before the Indians (8-3) scored to take a 29-27 advantage into the locker room. Central threatened to take control numerous times in the second half, but the Trojans refused to go away.

Kelly Walsh made one final run, pulling within 45-41 midway through the fourth. Central then went on a 15-0 run to push its advantage to 60-41 with 1 minute remaining.

The Indians, who were playing without leading scorer Baylee Delbridge, were led in scoring by Kelsey Basart with 21 while Madisyn Baillie added 13. Claire Fraley, Roree Cowley and Brogan Allen had six points each.

For the Trojans, Cydney Eskew and Makena Clemens paced Kelly Walsh with 11 points apiece, with Logann Alvar scoring all nine of her points in the first half.

PULLING AWAY: The Central boys outscored KW 37-27 in the second half while the Central girls outscored the Trojans 31-17.

HE SAID IT: "We have struggled shooting 3s this year. But we were able to knock some down and that kind of loosened things up for us in the middle." -- Central boys head coach Tagg Lain.

Luca Brooks scored a game-high 30 points lo lift the Bobcats (21-1) to the victory.

Dubois, Southeast, Saratoga and Upton advance to 1A boys semifinals

Rams are in semis for first time since 2005, while the other three teams all made it to the semifinals last year.

Kelly Walsh's Logann Alvar shoots a jumper in the Trojans' game against Cheyenne Central on Saturday at Kelly Walsh High School in Casper.