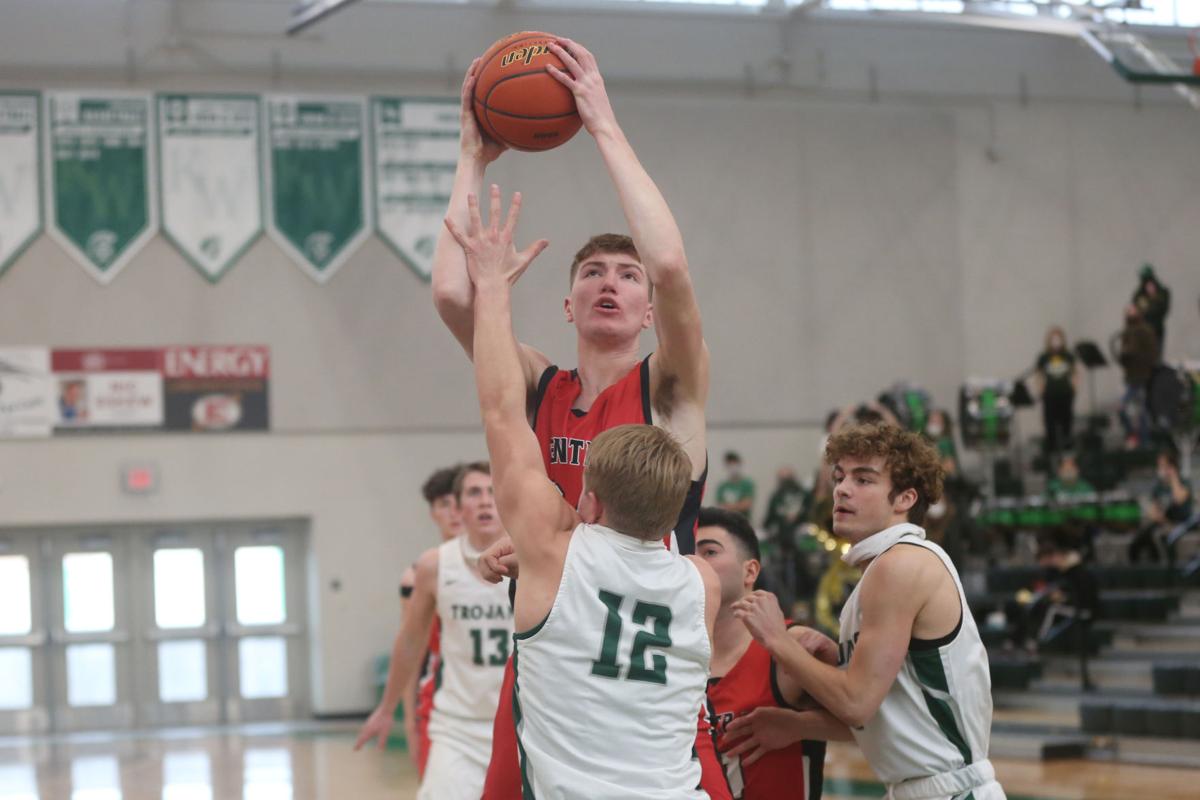 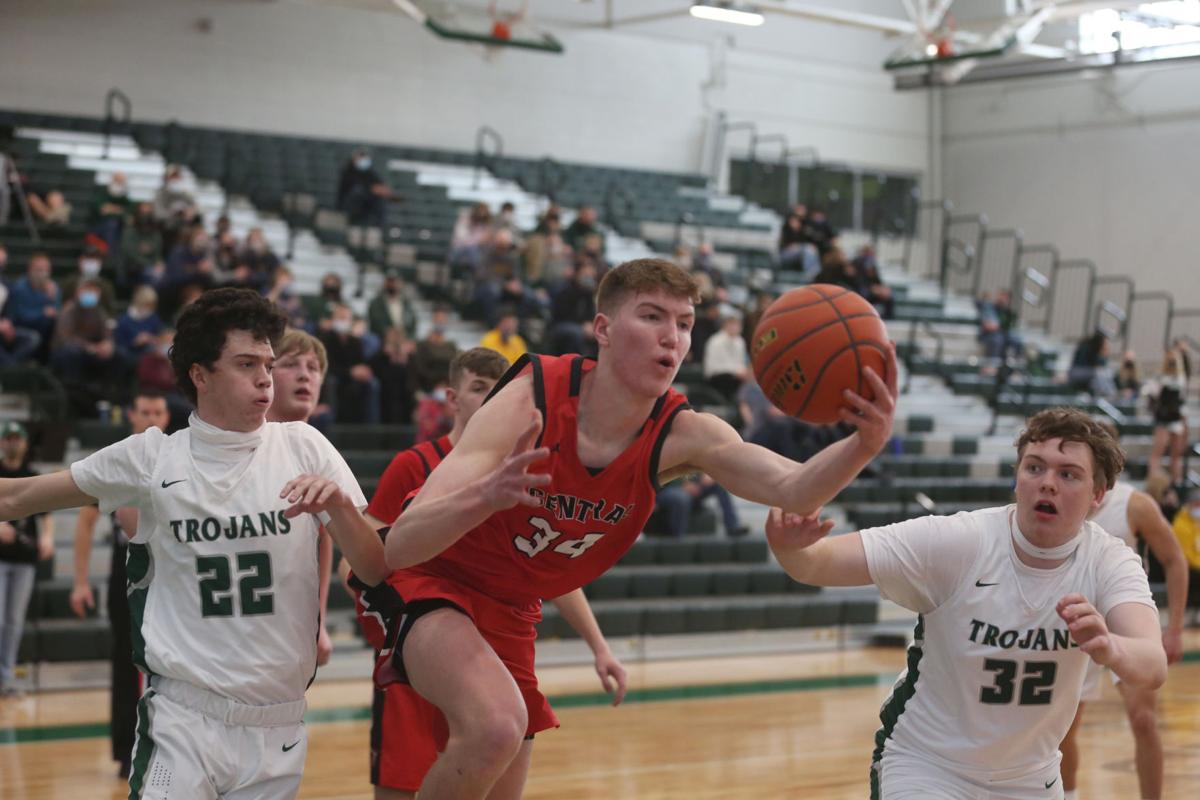 Cheyenne Central's Lawson Lovering chases down a rebound against Kelly Walsh on Saturday at the Kelly Walsh Gym in Casper. 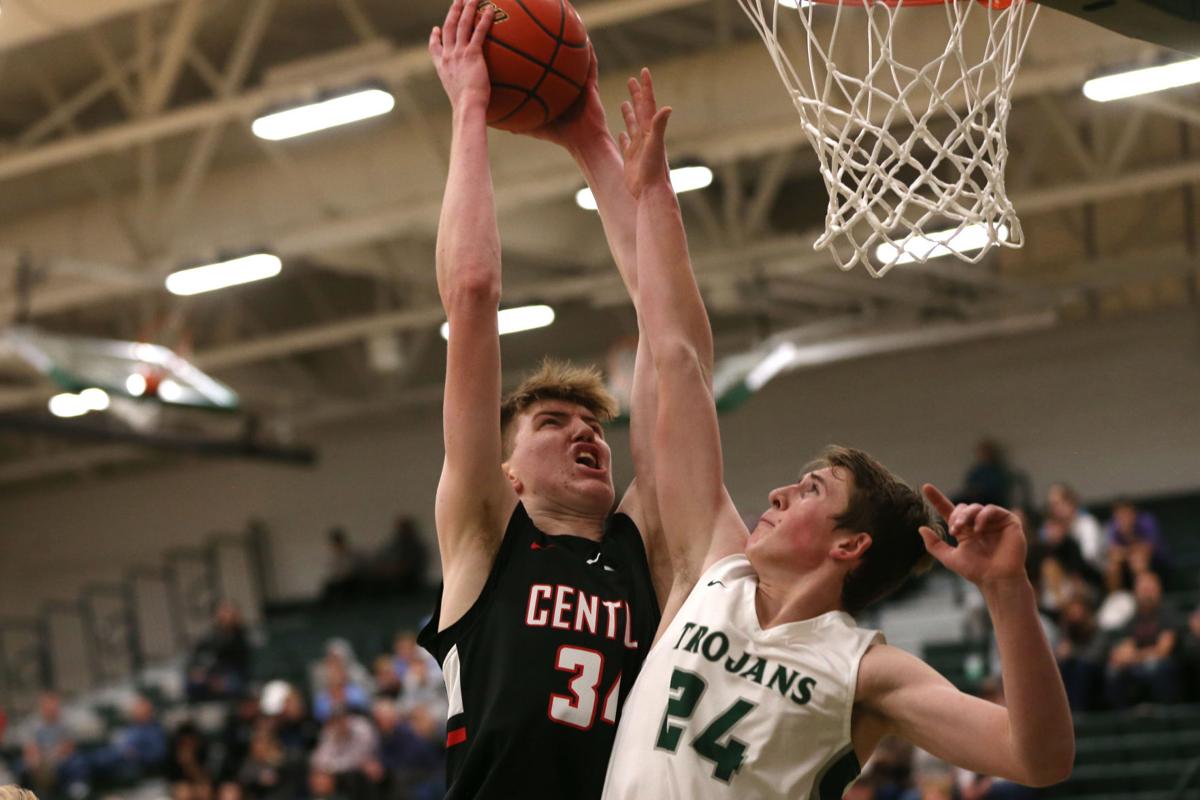 Cheyenne Central's Lawson Lovering goes up for a dunk against Kelly Walsh during the Casper Invitational on Dec. 12, 2019 in Casper.

Lawson Lovering caught the ball 15 feet from the basket and was immediately trapped by two Kelly Walsh defenders. The Cheyenne Central senior calmly held the ball above his head and waited. Moments later, senior teammate Brady Storebo cut to the basket and Lovering delivered a perfect pass for an easy assist.

Granted, the 7-foot Lovering had little trouble seeing over the Kelly Walsh defenders, neither of which was taller than 6 feet, 3 inches, but it was a play the Indians are growing more accustomed to seeing from their big man this season. In addition to averaging 13.6 points and 1.6 blocks and leading Class 4A with 11.0 rebounds per game, Lovering averages a team-high 3.7 assists.

“He’s grown in a lot of ways,” Cheyenne Central head coach Tagg Lain said, “but I think he’s shown the most improvement with his ball skills. We have a five-man that sees the floor and handles the ball, and we also use him to break pressure.

“His assist-to-turnover ratio is really, really good. And he’s always been a good shooter.”

Saturday against Kelly Walsh, Lovering finished with 17 points, two blocked shots and a handful of assists in the Tribe’s 64-49 victory. When the Trojans went to a full-court press, Lovering broke to midcourt where he could serve as the press breaker with his ability to see over defenders.

None of this is new for Lovering, a four-year starter and two-time all-state selection, who is currently ranked the No. 9 center and No. 58 overall in the Class of 2021 by Rivals.com. That he’s doing all of these things on a more consistent basis, though, is a sign of his continued growth. Having already signed to play Division I basketball at the University of Colorado — he committed to the Pac-12 Buffaloes prior to his junior season — Lovering entered his final high school season focused on improving the overlooked aspects of his game.

“I wanted to improve my ball-handling and my 3-point shooting and cut down on turnovers,” Lovering said of his offseason focus. “Right now my numbers don’t show it, but I do think I’m shooting better from the outside than I was last year. I just have to keep shooting with the same form and have confidence in my shot.”

Central is 10-2 overall (2-0 in Southeast play) heading into weekend home games against Gillette and Thunder Basin, which defeated the Tribe 54-46 back on Jan. 15. Central’s other loss this season was last Friday at Sheridan in a game it led after the first quarter but was outscored by 10 points in the second.

The Tribe played a more complete game against Kelly Walsh. Trailing 16-14 early in the second quarter they closed the half on 13-6 run. And by the time the fourth quarter rolled around Central had increased its advantage to 15 points (47-32).

“We’ve had real good games and we’ve had a couple games where we struggled in a couple quarters,” Lain admitted. “I think the two losses have been motivators for us and good learning experiences. We just have to continue to grow together.

“We just have to be at our best at the end of the year because that’s when it counts. We got that message sent to us in about a 12-hour span last year and these guys haven’t forgotten about that.”

It would be difficult for Central to forget.

The Tribe entered last year’s East Regional tournament with the No. 1 seed and as the state’s top-ranked team. They opened with a rout of Natrona County before Thunder Basin upset them in the semifinals. Rival Cheyenne East ended Central’s season the next morning in a loser-out game.

Even though the state tournament was canceled the following week because of the coronavirus pandemic, Central’s players, coaches and fans are all looking for redemption this year.

“Last year was definitely a disappointment,” Lovering acknowledged, “because I really thought we were going to win it. That motivates us for this year. We just have to hold each more accountable. We realize the mistakes we made last year that led us to that point and we‘re trying to correct those as we go along so we can win a state championship.”

One of seven seniors on this year’s team, Lovering is doing what he can to help the Indians erase the memories of last year’s finish. Even though his basketball career will continue at the next level, he’s not quite ready to fully embrace playing at Colorado yet, not with so much at stake in the next month.

“Of course I think about (playing at Colorado),” he said, “but I have one last year with my guys so I’m trying to live in the moment and enjoy one last year of high school basketball.”

ON THE RISE: The 7-foot Lovering, who has already signed with the University of Colorado, averages 13.6 points and leads the Indians with 11.0 rebounds and 3.7 assists per game.

HE SAID IT: “Of course I think about (playing at Colorado), but I have one last year with my guys so I’m trying to live in the moment and enjoy one last year of high school basketball.” -- Lovering.

Winter sports seasons are down to the final weeks, beginning with state swimming and diving this weekend.

Cheyenne Central's Lawson Lovering chases down a rebound against Kelly Walsh on Saturday at the Kelly Walsh Gym in Casper.

Cheyenne Central's Lawson Lovering goes up for a dunk against Kelly Walsh during the Casper Invitational on Dec. 12, 2019 in Casper.