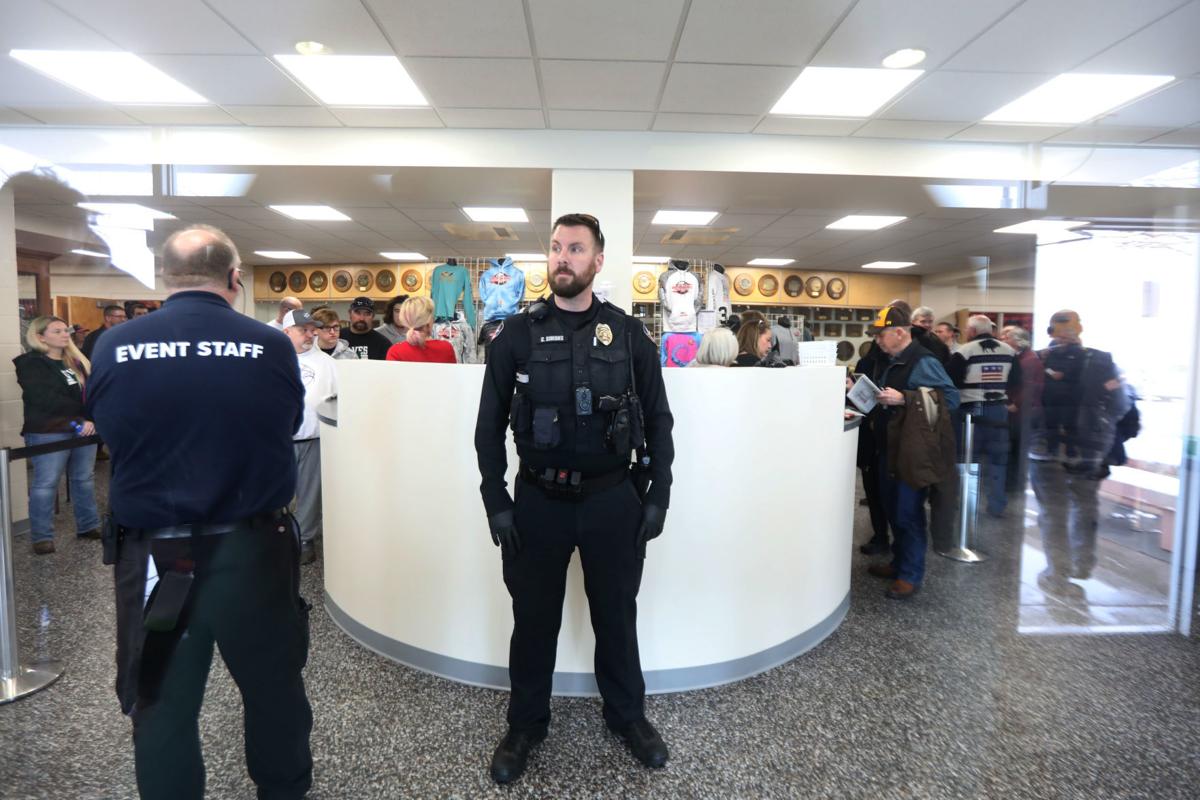 Police officers arrive at Casper College to provide backup for security as members of the public are escorted from the gym during the Wyoming State High School Basketball Championships March 12 in Casper. 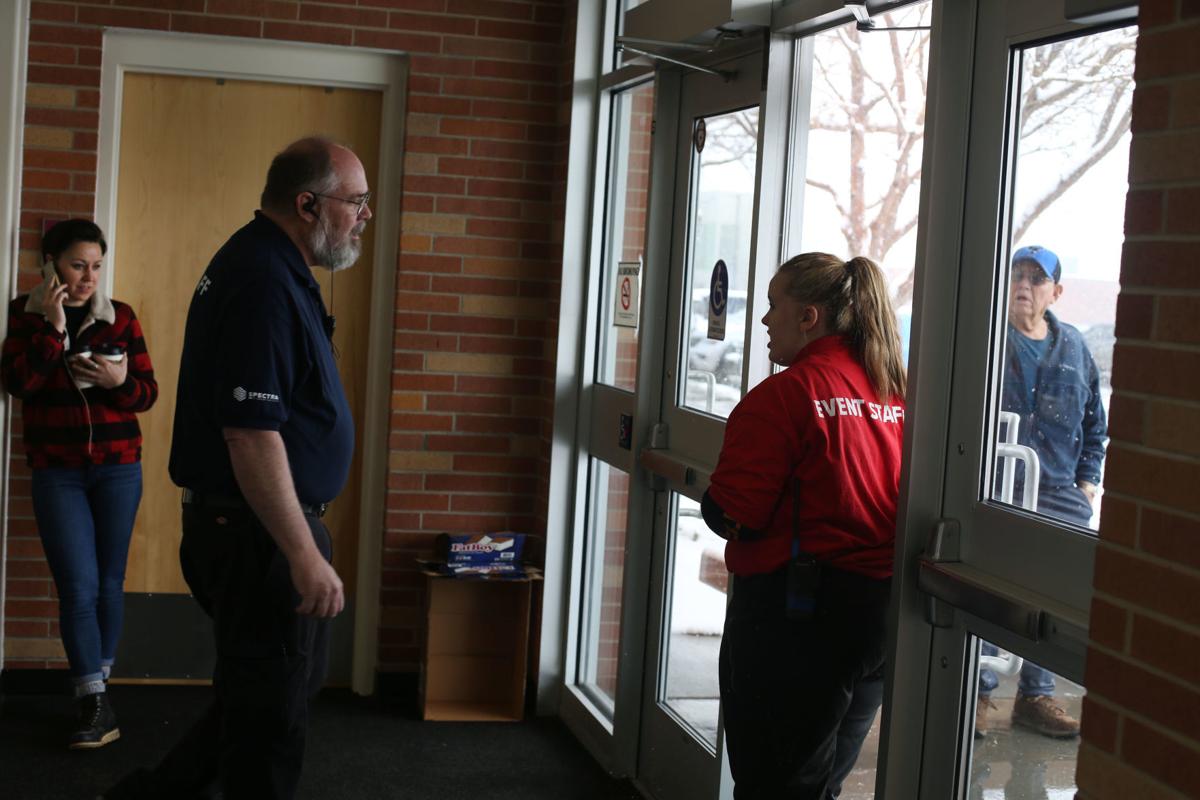 Security keeps members of the public out of the Casper College gym Thursday.

The annual event, which draws students from across the state, was set to run through Saturday.

Anna Kinder, executive director of the Casper-Natrona County Health Department, said county health officer Dr. Mark Dowell ordered the closure of the event. She described the ongoing coronavirus pandemic as “very contagious” and said it “will spread like wildfire.”

“Canceling this tournament is in the best interest to minimize (the spread) and protect all of you,” she said.

Dowell said Thursday afternoon that he stood by his decision and that it was a “no-brainer.”

An an infectious disease expert, Dowell said that holding the tournament could’ve potentially exposed hundreds or thousands of Wyomingites. He said he wouldn’t have been able to sleep at night had he allowed it to continue.

Wyoming confirmed its first positive case of COVID-19, the disease caused by the new coronavirus, on Wednesday evening. A woman in Sheridan County was affected. The Sheridan High School boys team was scheduled to play Thursday night in Casper.

Teams did begin competing Thursday morning. However, personnel cleared the Casper Events Center and the Casper College gymnasium of players and fans around 10:30 a.m., not long after the county health department announced that the tournament would continue but spectators and media would not be allowed into the events. Within half an hour, buses had pulled away from the center and the venue was largely empty, with stragglers clearing out equipment.

Asked why he decided to change from closing the games to spectators to canceling them fully, Dowell said he did some self-reflection and that the decision to suspend other sporting events made him change his mind.

He said he had received some backlash for the decision. But he said those in the health care world agreed. Kim Deti, a spokeswoman for the state Health Department, said the agency wasn’t recommending the cancellation of any events but said that those decisions are often in the hands of local officials.

In a Thursday evening press conference, Gov. Mark Gordon said he was recommending that state groups and entities reconsider holding large events with 250 or more people.

Kinder said she was aware that canceling the tournament was a hardship but that the decision was influenced by the fact that people would be converging on one spot in Wyoming before returning to cities and towns throughout the state. She said the situation is “constantly moving, constantly changing” but that it was important to be proactive in calling off the tournament so that COVID-19 “doesn’t wipe out our entire community.”

Wyoming officials have said the risk of infection to residents of the state is relatively low, in part because of the state’s rural nature and few large population centers. But that feature — how spread out Wyomingites are — would be moot if a concentration of fans from various communities across the state converged and then returned to their communities.

“Most of us in this room will have some form of it and will recover,” she said.

Kinder said there are no suspected cases of the disease in Natrona County and that the county health department currently does not have any test kits. LabCorp may have some, she said.

Wyoming High School Activities Association commissioner Ron Laird said he spent most of the morning meeting with Events Center director Brad Murphy. They were also working with the county health department before issuing the announcement.

“Out of an abundance of caution to contain the possible spread of COVID-19 within Natrona County and the state, this difficult decision was made,” the announcement stated. “The Casper-Natrona County Health Department and the Natrona County Health Officer recognizes and admires that many people traveled to Natrona County, students and coaches have worked very hard and are very disappointed in this result. However, the health and safety of our community, citizens and visitors is of upmost priority.”

News of the situation began to filter through social media as the Lyman and Newcastle girls played the second half of their Class 3A quarterfinal game at the Events Center and Cheyenne Central and Green River played a 4A girls quarterfinal game at Swede Erickson T-Bird Gym at Casper College.

What Wyoming needs to know about coronavirus

The coronavirus and Wyoming's preparation, explained

What is the coronavirus and how can you protect yourself? Our explainer has the answers.

University of Wyoming extends spring break by a week, will make decision later about moving online

UW's spring break begins next week and will now continue through the week of March 23. The semester will not be extended.

The tournament will be difficult to reschedule, an official said.

The colleges made the move to limit the spread of coronavirus.

"Although we have only one confirmed case of COVID-19 in Wyoming, I have taken this action to ensure we are prepared in the event additional steps need to be taken,” Gordon said.

Officials are examining whether at least one student was exposed to coronavirus at an extracurricular event in Wyoming, though experts say it's most likely that the unidentified illness is not the contagious virus.

Overall, more than 2,900 people have been diagnosed in the U.S. as of Saturday morning, a sharp increase in just the past five days. Health officials in Wyoming say they're up to the task.

Governor: Feds have diverted away shipments of protective gear meant for Wyoming

State's top seniors were scheduled to compete next month in Casper in volleyball and boys and girls basketball.

Wyoming fall prep sports season gets the go-ahead, with some major changes

The WHSAA released a statement Tuesday that the seasons for all six sports will begin as scheduled next month.

Police officers arrive at Casper College to provide backup for security as members of the public are escorted from the gym during the Wyoming State High School Basketball Championships March 12 in Casper.

Security keeps members of the public out of the Casper College gym Thursday.