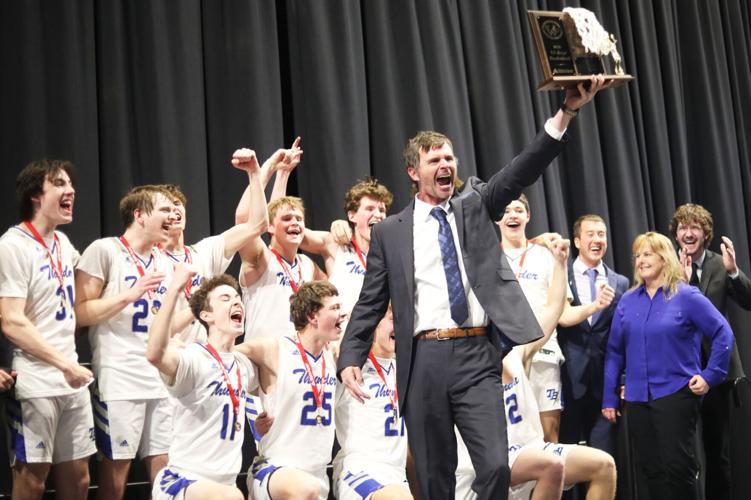 Thunder Basin head coach Rory Williams hoists the championship trophy as his players celebrate behind him after the Bolts defeated Cheyenne East to win the Wyoming State High School Class 4A Basketball Championship on March 12 at the Ford Wyoming Center in Casper. 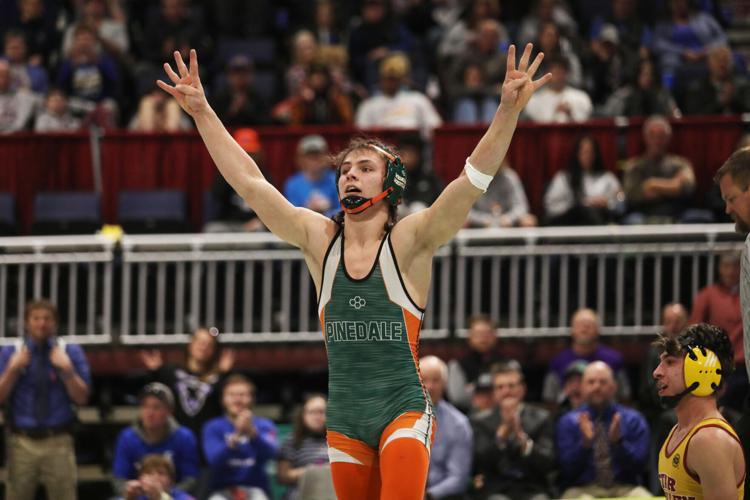 Pinedale's Cody Phelps holds up four fingers to the crowd after winning the 138-pound title match at the Wyoming State High School Class 3A Wrestling Championships on Feb. 27 at the Ford Wyoming Center. Phelps completed an undefeated season with his fourth consecutive state championship. 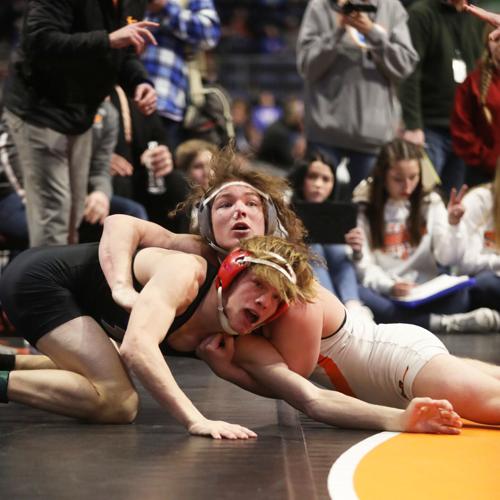 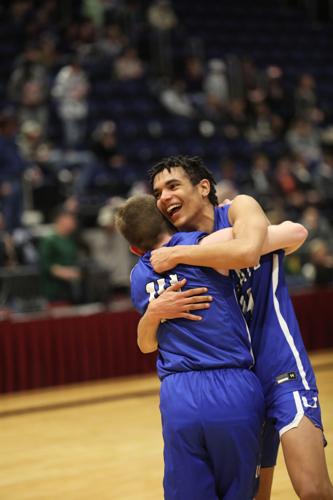 Yesterday the Star-Tribune took a look back at the 2021-22 fall prep season, followed by a closer look at the winter sports today. The three-part series will conclude Friday with the spring sports season.

Thunder Basin survived a tough semifinal game against Kelly Walsh and then defeated Cheyenne East to win the Class 4A championship behind Gatorade Player of the Year Deegan Williams. The title was the first for any Bolts boys team.

In 3A, Rawlins held on for a 40-39 victory over Douglas. The Outlaws got 17 points from Ashton Barto. Jarron Mascarenas tipped the ball away as Douglas was setting up for a potential game-winning shot to preserve Rawlins’ first state title in 25 years.

Pine Bluffs claimed its third 2A championship in seven years with a 52-41 victory over Big Horn. Juniors Stu Lerwick (20) and Ryan Fornstrom (17) combined for 37 points and the Hornets outscored the Rams 33-24 in the second half.

Upton made it back-to-back titles in 1A with Dawson Smith, Luca Brooks and Nathan Baker all scoring in double figures in the Bobcats’ 58-51 victory over Dubois. Cody Wright had a game-high 26 points for the Rams.

Douglas had its 48-game winning streak snapped during the regular season, but won its fourth consecutive 3A championship with a 45-37 victory over Lyman. Sisters Allison Olsen (17) and Lauren Olsen (12) combined for 29 points in the Bearcats, who won their fourth consecutive state title (2018-19, 2021-22).

In a battle of undefeated teams in the 4A championship game, Cheyenne East defeated Cody 51-41 behind 17 points from Boden Liljedahl and 16 from Gatorade Player of the Year Jordan Jones to win their second title in a row.

In the 2A title game, Rocky Mountain’s Victoria Arnold had a game-high 24 points to lead the Grizzlies to a 46-35 victory against Moorcroft. It was Rocky Mountain’s first state title since 1993.

Southeast won the 1A championship, defeating Upton 58-53 in overtime. Brenna Herring (17), Kealy Carson (11) and Sidney Anderson (10) all scored in double figures for the Cyclones.

Jonny Kulow set state records in both the 50 free (20.07 seconds in the prelims) and in the 100 free (44.15 in the finals) and teamed with McFadden, Huelskamp and Blackburn to set the new state standard in the 400 freestyle relay (3:05.88). Kulow, who will swim at Arizona State, leaves Lander with five individual state records in addition to swimming on all three state-record holding relay teams.

The 500 free title was the third in a row for Brown, while Powell’s Nate Johnston won his third consecutive title in the 100 breast.

In 4A, Laramie finished atop the podium for the fifth year in a row, with Dylan Bressler defending his diving crown, Mace Spiker-Miller winning his third consecutive title in the 100 fly and Collin Fontana winning the 500 free.

The 3A title went to Star Valley for the seventh year in a row, but didn’t secure its latest championship until Harrison Hoopes won the title at 195. The Braves, who are moving up to 4A for the 2022-23 season, finished just 2.5 points ahead of Douglas (216-213.5) in the team race.

Also in 3A, Lyman’s Sefton Douglass and Pinedale’s Cody Phelps became the newest members of the Four-Timers Club and the first wrestlers from their respective schools to join the exclusive club. Douglass, who went 50-0 at 126, was undefeated the past three seasons and finished his prep career with a record of 166-3. Phelps was unbeaten his junior and senior seasons and went 194-5 in his prep career.

The Sheridan boys won their fourth consecutive team title and the Cheyenne Central girls held off Gillette to win for the second time in three years.

For the Broncs, Carter McComb won the 55- and 200-meter dashes, Austin Akers won the 1600, Ryan Karajanis won the pole vault for the third year in a row and Texas Tanner won the shot put. Sheridan also won three relays, with the 1600 sprint medley team of McComb, Dominick Berrettini, Patrick Aasby and Reece Charest setting a state record with a time of 3 minutes, 39.57 seconds. McComb also set a new state standard in the 55, running 6.47 seconds in the prelims.

For Central, Sydney Morrell won the 800 for the second year in a row, Kaya Pillivant raced to the 3200 title, Brinkley Lewis was the pole vault champ and Katie Thomson took gold in the triple jump. The Indians also won the 1600 sprint medley.

The Gillette team of Aubry Dewine, Aja Roberts, Nyomi Moore and Sydalee Brown won the 4x200 with a state-record time of 1:45.38.

Jackson swept the team titles, with the boys winning for the fourth year in a row and the girls for the 11th.

Individually, the Broncs’ Kate Brigham took gold in both the freestyle/skate and classic races for the second year in a row. Jackson’s Mason Wheeler won both races for the boys.

Jackson once again swept the team championships as well as the individual titles. The girls team won its 13th consecutive state championship and the boys team its 11th in a row.

Taylor and Wheatland's Kade Preuit were also selected to participate in the Wyoming-Montana All-Star Basketball Series next weekend.

Thunder Basin head coach Rory Williams hoists the championship trophy as his players celebrate behind him after the Bolts defeated Cheyenne East to win the Wyoming State High School Class 4A Basketball Championship on March 12 at the Ford Wyoming Center in Casper.

Pinedale's Cody Phelps holds up four fingers to the crowd after winning the 138-pound title match at the Wyoming State High School Class 3A Wrestling Championships on Feb. 27 at the Ford Wyoming Center. Phelps completed an undefeated season with his fourth consecutive state championship.