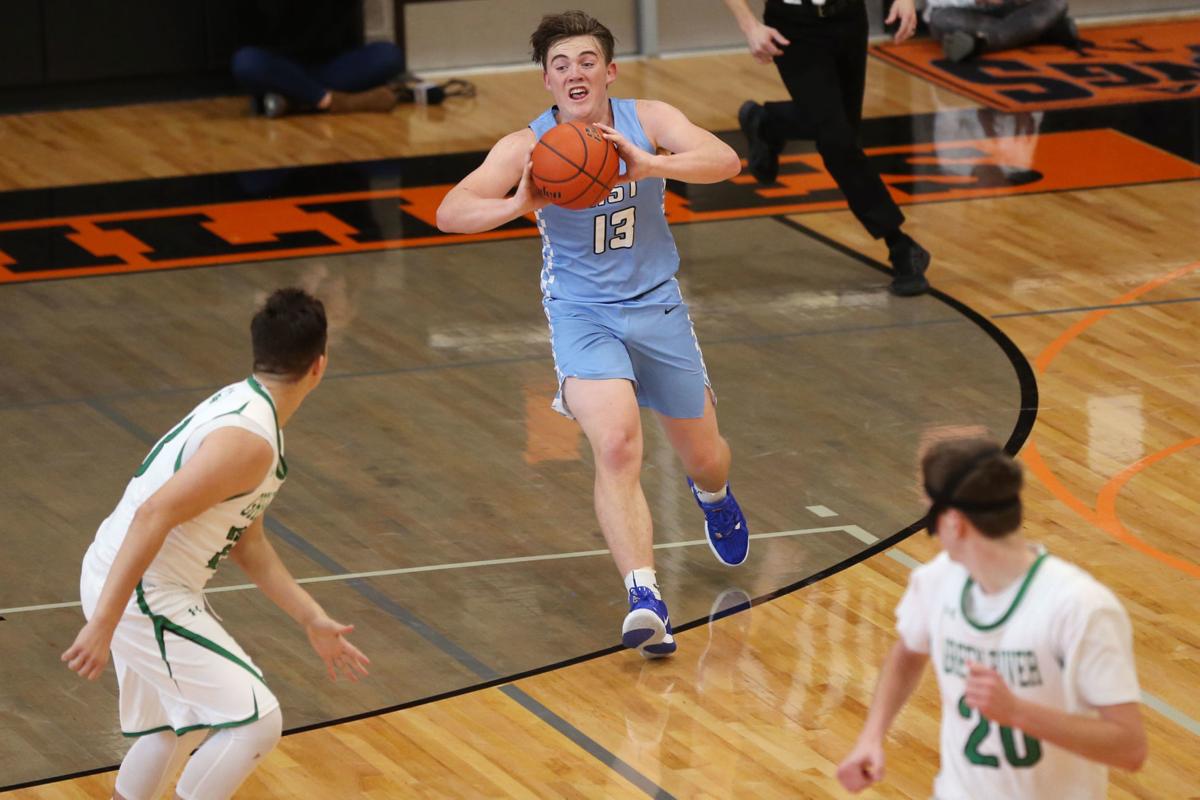 Cheyenne East Graedyn Buell passes the ball ahead in the T-Birds' game against Green River during the Casper Invitational on Dec. 12, 2019 at Jerry Dalton Gym in Casper. 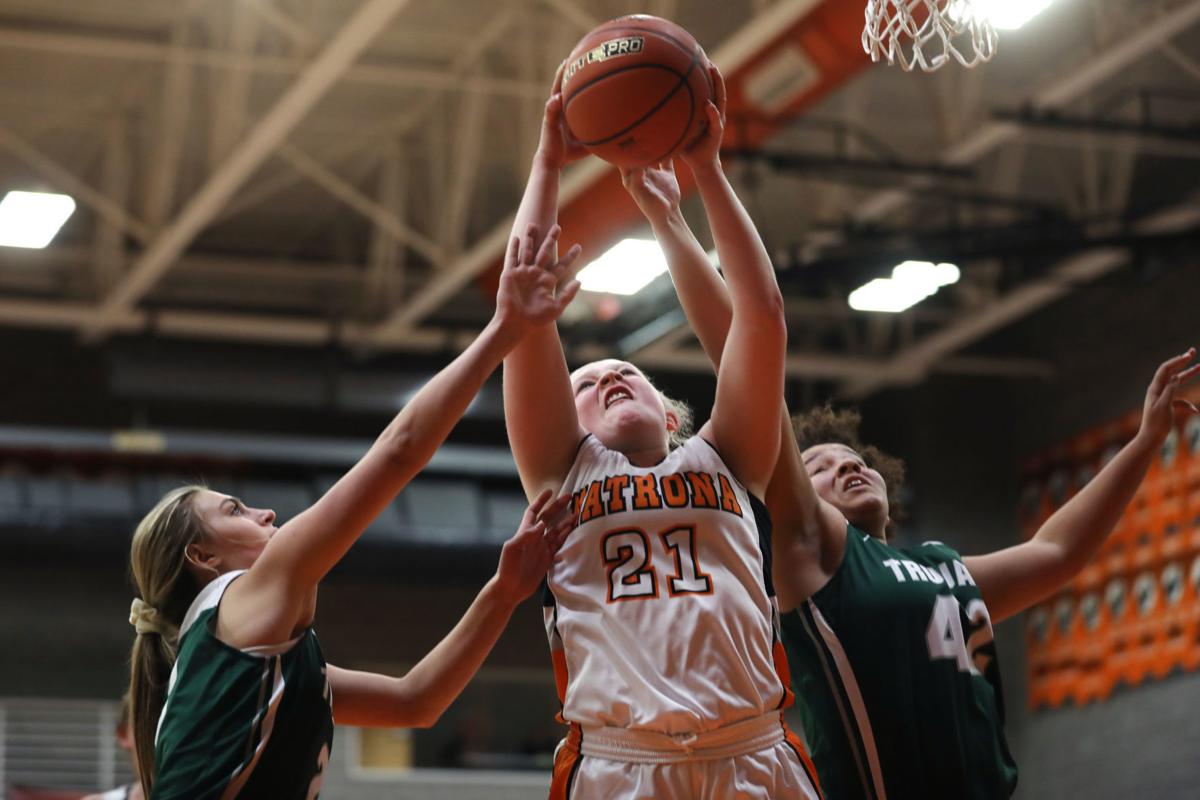 Natrona County's Tamryn Blom grabs a rebound in the Fillies' game against Kelly Walsh on Dec. 19, 2019 at Jerry Dalton Gym in Casper.

This week’s large-scale return of basketball across Wyoming’s courts means that, for a number of teams, their first competitive weekend of 2020 will be in Cheyenne for the annual Taco John’s Invitational. This marks the last significant in-state tournament before most teams proceed with their conference schedules.

While smaller schools will spend their weekends in Kemmerer, Pinedale, Dayton and Kaycee, some of the largest schools head to the Capital City (as well as Laramie and Pine Bluffs) for a primer against non-conference competition.

The action is spread across three days, so here’s a glance at some of the games to keep an eye on each day.

Wheatland vs. Lander: Surprise, this is a battle of unbeatens. The defending state champion Tigers (7-0) start the weekend’s action against the Bulldogs (6-0) in a rematch of last year’s state semifinal.

Green River at Laramie: Scrappy and undersized Green River faces another mismatch against undefeated Laramie (6-0). Both teams enter 2020 looking at arms races in their respective quadrants.

Lusk at Pine Bluffs: It’s a quadrant clash to start 2020 for both sides. Lusk (5-1) takes confidence into enemy territory, where senior Michael Shain (26.5 points, 8.3 rebounds) and the Hornets await.

Natrona County at Cheyenne Central: The Mustangs have suffered two fourth-quarter, gut-check losses after starting 3-0. Meanwhile, the Tribe may be the team to beat within state lines this season.

Sheridan at Cheyenne East: This one doesn’t have the same allure as it did in the pre-season after initial struggles for both teams. So the Broncs (4-1) and T-Birds (4-3) will aim for better starts in 2020.

Kelly Walsh at Cheyenne South: The Trojans’ first win came against South, back before Kelly Walsh’s re-tooling. Meanwhile, the Bison have gained confidence with the defending champions coming to town.

Kelly Walsh at Laramie: This will be Laramie’s biggest test to date. It’ll also help evaluate Kelly Walsh. So this is a considerable measuring-stick game.

Lander vs. Natrona County: A textbook case of a mutually beneficial game. The defending 3A champions have their points to tune-up, as do the aggressive Mustangs. This should be a lot of fun.

Lusk at Pine Bluffs: No one in 2A rebounds or forces steals better than the Hornets. The Tigers have simply found a way to win. They are a combined 7-2 so far so this is a fun quadrant preview.

Kelly Walsh at Cheyenne Central: The Tribe are riding a four-game winning streak after going undefeated in Colorado while the Trojans haven’t won since the season-opening weekend. Both have high hopes for 2020.

Rock Springs at Cheyenne South: Watch out for this one. The Bison lead 4A by shooting 46.9 percent from the floor while the Tigers hold teams to a 4A-low 40.1 points and 30.5 percent.

Green River vs. Natrona County: These teams are almost mirror images of each other. They both have dual inside presences with deep guard play. The Fillies (4-1) have impressed as have the Wolves (6-2).

Riverton vs. Pine Bluffs: This inter-class game could pose mismatches, but the Hornets have historically held their own. And the Wolverines (6-2) can prove they are for real this weekend.

Wheatland vs. Lusk: One of the state’s best players in Wheatland’s Danielle Brow (16.3 points, 10.7 rebounds) poses a trying matchup for the scrappy Tigers. The Bulldogs aim to carry their momentum forward.

Kelly Walsh at Laramie: The Trojans start the weekend tough and after a quick meeting with Wheatland, they close the weekend with eyes on the confidence boost of a 4A win.

Complete schedule for this weekend's games. Page B2

Offense escapes Natrona County as Mustangs let another win get away

For the second game in a row, the Mustangs let a lead slip away in the fourth quarter.

Cheyenne East Graedyn Buell passes the ball ahead in the T-Birds' game against Green River during the Casper Invitational on Dec. 12, 2019 at Jerry Dalton Gym in Casper.

Natrona County's Tamryn Blom grabs a rebound in the Fillies' game against Kelly Walsh on Dec. 19, 2019 at Jerry Dalton Gym in Casper.