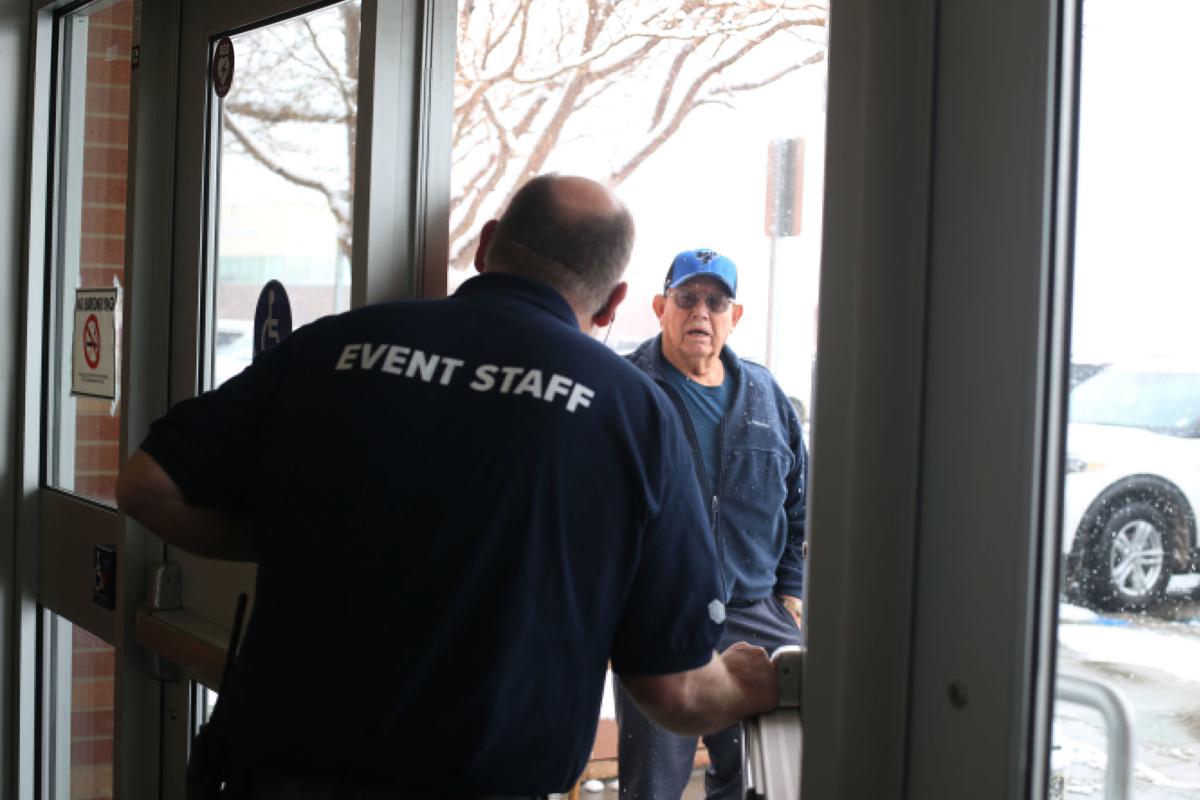 A security guard turns away fans at the doors to Casper College's Swede Erickson Thunderbird Gym for the Wyoming State High School Basketball Championships on Thursday in Casper. 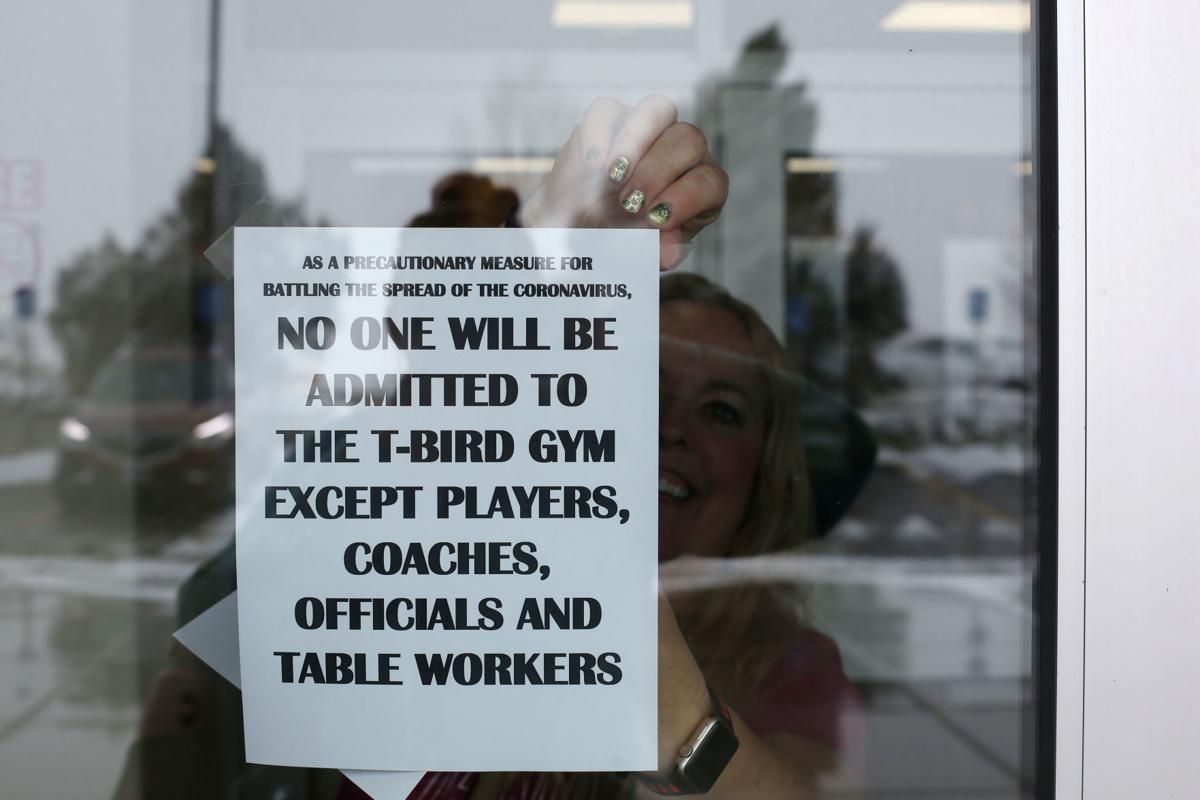 A Casper College official tapes a sign to the entrance of Swede Erickson Thunderbird Gym keeping members of the media and public from attending the Wyoming State High School Basketball Championships on Thursday in Casper.

The Lander girls basketball team was on the way to Casper for its 4:30 p.m. quarterfinal game against Rawlins when it received notice that this weekend’s Wyoming State High School Class 3A/4A Basketball Championships were canceled due to precautionary measures taken to combat the COVID-19 (coronavirus) pandemic.

Tigers head coach, and Lander activities director, Serol Stauffenberg said it was the oddest trip he’s ever taken to Hell’s Half Acre. Initially they were scheduled to play, then they were scheduled to play without fans, then their championship tournament was canceled altogether within a matter of minutes. So the Tigers turned around and headed home, stopping at Taco Bell in Riverton as a consolation.

“Our girls were saying that it almost feels like your team didn’t make it regional weekend,” Stauffenberg told the Star-Tribune. “I feel like I was put out of a tournament we were never in.”

Dr. Mark Dowell, Natrona County’s health officer and an infectious disease physician, explained at a Thursday afternoon press conference in Casper that the snap decision was made to cancel the tournaments after initially playing without crowds. He added that the decision came through “self-realization,” as well as an acknowledgement of the NBA, NHL and MLS to postpone their season and the NCAA’s decision to cancel their men’s and women’s tournaments.

The Lander girls were one of just 32 teams scheduled to play throughout Casper over the next three days at the state tournament. All of them left with a similar feeling after the tournaments were canceled for the first time since 1936, according to wyoming-basketball.com. At that time, scarlet fever swept through the state and some communities protested the Wyoming Board of Health’s decision to cancel that tournament. Thursday, fans expressed their dissatisfaction with the decision with Dr. Dowell or whichever officials were closest.

Fans from Green River and Cheyenne Central vented their frustrations toward Wyoming High School Activities Association associate commissioner Trevor Wilson as he informed the crows at Casper College’s Swede Erickson Thunderbird Gym of both decisions: to play without fans and to ultimately cancel the tournament.

Natrona County and Kelly Walsh girls were prepared to take the court for warm-ups when Wilson informed the crowd. Afterward, Fillies sophomore Alesha Lane waited for her father outside The Swede feeling understandably letdown.

“I definitely understand the health risk, I don’t want anybody getting sick and I get why they did it,” she said. “But it still sucks.”’

She was one of hundreds of high school basketball players faced with the reality that their seasons had likely came to an end. And for the seniors, their entire basketball careers ended in a silent swan song — without accolade and unknown.

“It’s an unfortunate turn of events for student-athletes to not be able to participate in a culminating event, but I won’t find fault with individuals who made a decision based on the well-being of our students and community,” Kelly Walsh activities director AJ Nathan told the Star-Tribune. “Hopefully the players throughout the state can reflect positively on a season full of accomplishments from giving their best efforts instead of feeling negative about this unforeseen ending.”

It’s left schools and programs looking for answers without closure. Rawlins girls’ head coach Katie Cline shared her team’s resiliency through repeated rescheduling throughout the season due to Interstate-80 closures only for their end goal, the constant reminder in the corner of the chalkboard, to get wiped away before they stepped foot on the court. Defending Class 3A boys champion Lander remained “cautiously optimistic,” as head coach Stu Mullins said, that they could find closure someway. The Green River boys, back in consecutive state tournaments for the first time since 2008-09, never got to play in the state tournament they scrapped for. Wolves head coach Laurie Ivie said her team was still in shock after the decision.

Among those distraught and searching for answers were the defending champion Thunder Basin girls. They’d gone undefeated in the Northeast Quadrant with a 20-6 overall record and were optimistic about the weekend. Head coach Braidi Lutgen acknowledged lack of closure while her team packed to return to Gillette. Bolts junior Gabby Drube summarized how most felt on Thursday afternoon.

During the Star-Tribune’s live-stream made available on its Facebook page of Dr. Dowell’s press conference, Drube pleaded in the comments.

“We just want to play please try and figure out some way we can,” she wrote. “We will play without a crowd.”

Instead of crowned champions and curtain calls, players returned home with broken hearts and no end in sight. Wilson stated that there’s a chance of rescheduling the state basketball tournament but that couldn’t be promised. Dr. Dowell stated during the press conference that there’s no rescheduled or contingency plans. Three months of a season, four years of careers, wiped away at a moment’s notice.

THURSDAY: The high school basketball season came to an unceremonious close with the first canceled state tournament since 1936.

DISAPPOINTED: Players and coaches tried to find closure in the decision to cancel the state tournament.

SHE SAID IT: "I definitely understand the health risk, I don't want anybody getting sick and I get why they did it. But it still sucks." -- Natrona County sophomore Alesha Lane.

The change is not anticipated to interfere with any of the traditional functions of the caucus itself.

A security guard turns away fans at the doors to Casper College's Swede Erickson Thunderbird Gym for the Wyoming State High School Basketball Championships on Thursday in Casper.

A Casper College official tapes a sign to the entrance of Swede Erickson Thunderbird Gym keeping members of the media and public from attending the Wyoming State High School Basketball Championships on Thursday in Casper.