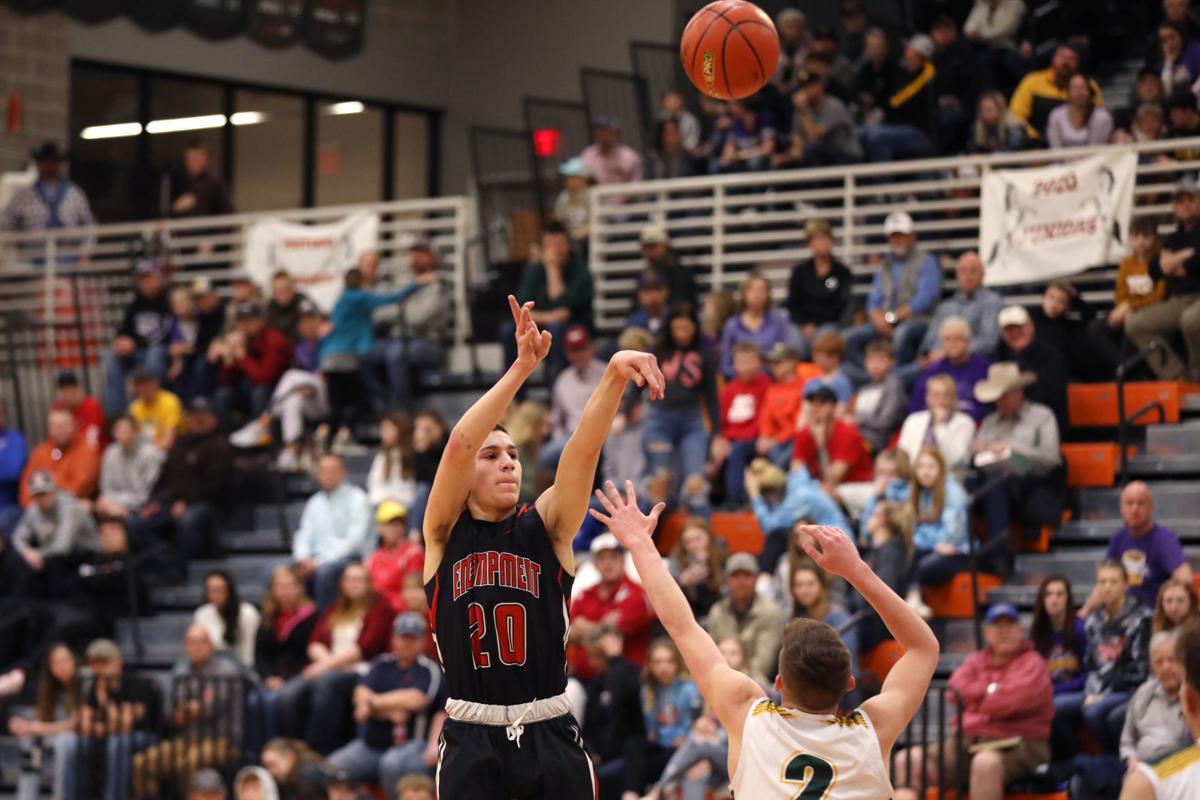 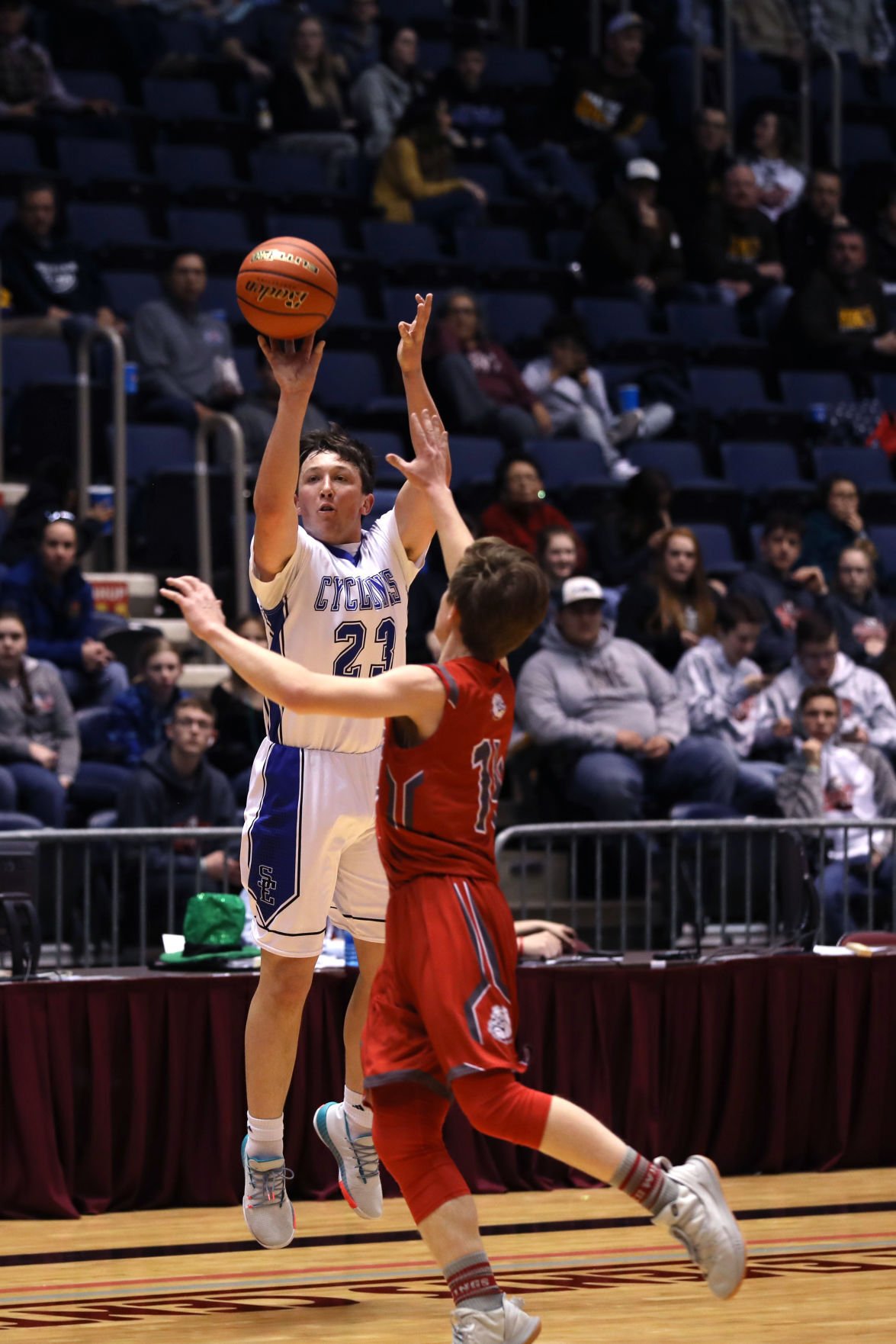 Southeast's Cord Herring shoots a 3-pointer in the Cyclones' game against Sundance in the semifinals of the Wyoming State High School Class 2A Boys Basketball Championships last year at the Casper Events Center.

As the high school winter sports seasons head into their final weeks — boys state swimming and diving championships get things started this weekend in Laramie — a number of basketball fans have raised issue with how teams qualify for the upcoming state tournaments.

In previous years, teams from the East and West conferences in all four classifications would play in double-elimination regional tournaments, with the top four teams from each tournament advancing to the state tournament the following week.

However, because of the coronavirus pandemic, the Wyoming High School Activities Association board of directors made some changes before the start of the school year designed to insure each sport would have a state-culminating event. After all, last year’s Class 3A/4A state basketball tournament was first postponed and then eventually canceled due to COVID-19 concerns. One month later, the spring sports seasons for track and field and soccer were canceled before they even began.

“I still remember, very vividly, when I had to walk out and make the announcement that the 3A/4A state basketball tournament was done,” WHSAA commissioner Ron Laird said in a phone interview Tuesday. “We don’t want that to happen again.”

As a result, the WHSAA board of directors made the decision this past fall that volleyball teams would qualify for state by winning a game in quadrant play.

(Basically, the No. 4 team from a quadrant would play the No. 1 team from the same quadrant and the No. 2 and No. 3 teams would also face off. The two winners would automatically qualify for state and would then advance to the regional tournament for seeding purposes.)

“We know there are people that don’t like the format of the basketball brackets,” Laird said. “It’s the same set-up that we had in volleyball and they didn’t like it then either.”

The concern for some is that the format might result in some deserving teams failing to qualify for state if they have one bad game. But with Class 1A and Class 2A basketball set to begin quadrant play Feb. 25, the WHSAA isn’t about to change this year’s format.

“First of all, our goal is to complete the season,” Laird acknowledged. “So anything we can do to split large gatherings we’re going to do. At this point, all the work that has gone in by the people that are going to host, whether it’s figuring out ticketing or how they’re going to handle crowds, and we already have officials assigned … everything has been completed so we’re not changing them and we’re moving forward

“We know that there is a lot of emotion in high school sports,” he added. “We said from the very start of the school year that there are going to be situations where it’s not going to seem fair. Our main goal is to get through the year and I think some of the things we’ve done has helped us to get where we’re at.”

Granted, there will be some quality teams that don’t qualify for state under this year’s format. In the boys 3A Northwest Quadrant, either Worland (13-3), Powell (12-2) or Lander (11-3), or possibly two of them, won’t qualify. And in the boys 1A Southwest Quadrant, the same holds true for Saratoga (11-2), Encampment (11-2) and Farson (11-3). But the teams knew this going into the season.

And there’s even the possibility the Douglas girls, who are currently 16-0 and have outscored their opponents by an average of 73.3 to 33.2, would fail to qualify for state if they lose their Northeast Quadrant opener. Then again, the Cheyenne Central boys entered Class 4A East Regional action last year with a 20-1 record, but lost to Thunder Basin in the semifinals and Cheyenne East the following morning in the consolation semifinals, and didn’t qualify for state.

The format isn’t perfect. But given the current circumstances, it’s the one the teams have to work with. Besides, at this point they know what they need to do.

QUADRA(N)TIC FORMULA: Teams have to win the first game of their respective quadrant play tournaments to qualify for the state tournament.

HE SAID IT: "You better win." -- WHSAA commissioner Ron Laird.

The 7-foot senior averages 13.6 points, leads Class 4A in rebounding (11.0 per game) and also paces the Indians with 3.7 assists per game.

Southeast's Cord Herring shoots a 3-pointer in the Cyclones' game against Sundance in the semifinals of the Wyoming State High School Class 2A Boys Basketball Championships last year at the Casper Events Center.