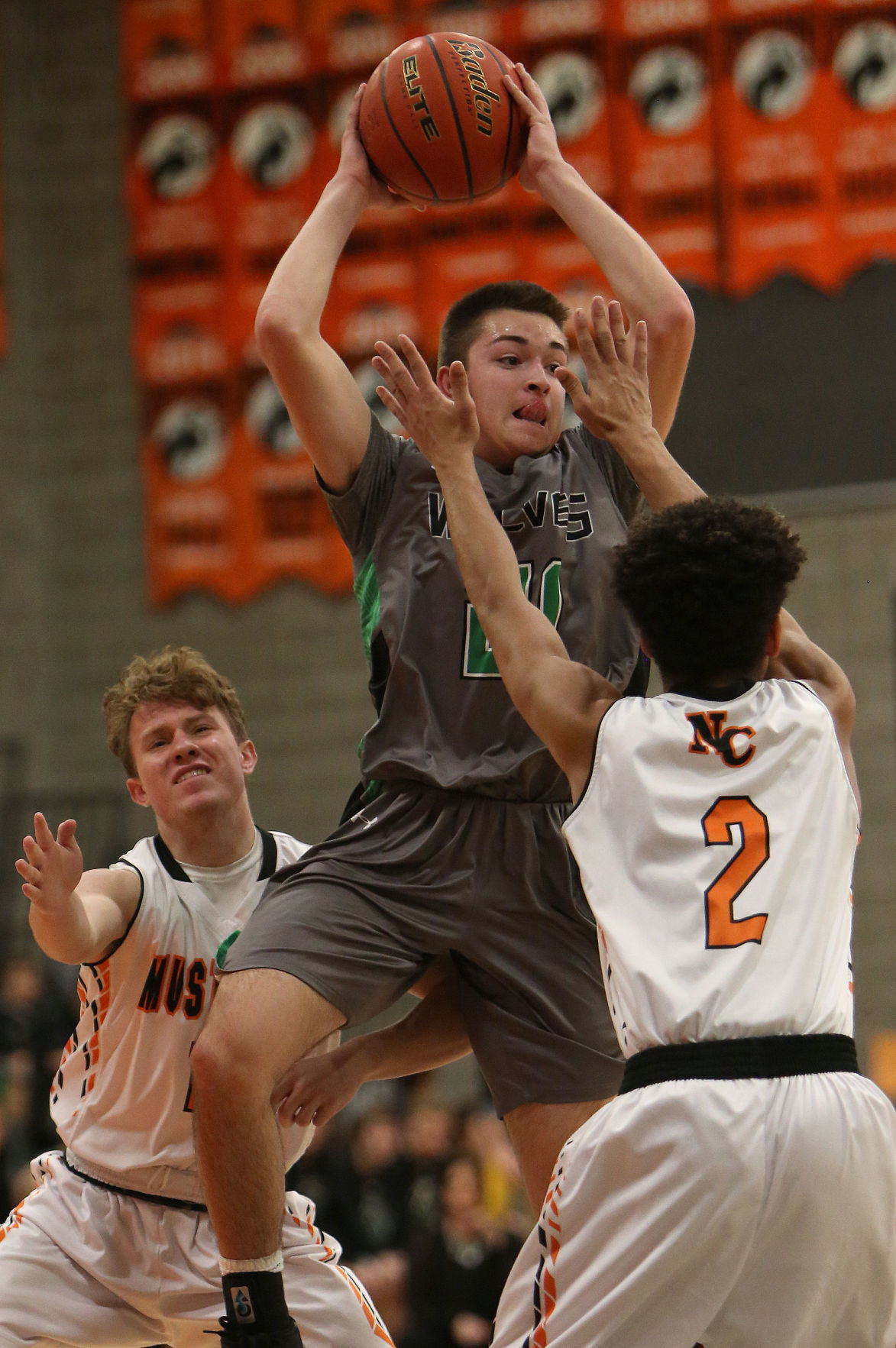 Green River’s Cameron Morris look to make a pass while jumping between Natrona County's Tehl Campbell and Phavian Gordy during a Feb. 2 game in Casper. The Wolves defeated Natrona County and Kelly Walsh on the road for the first time in the same season since 1982. 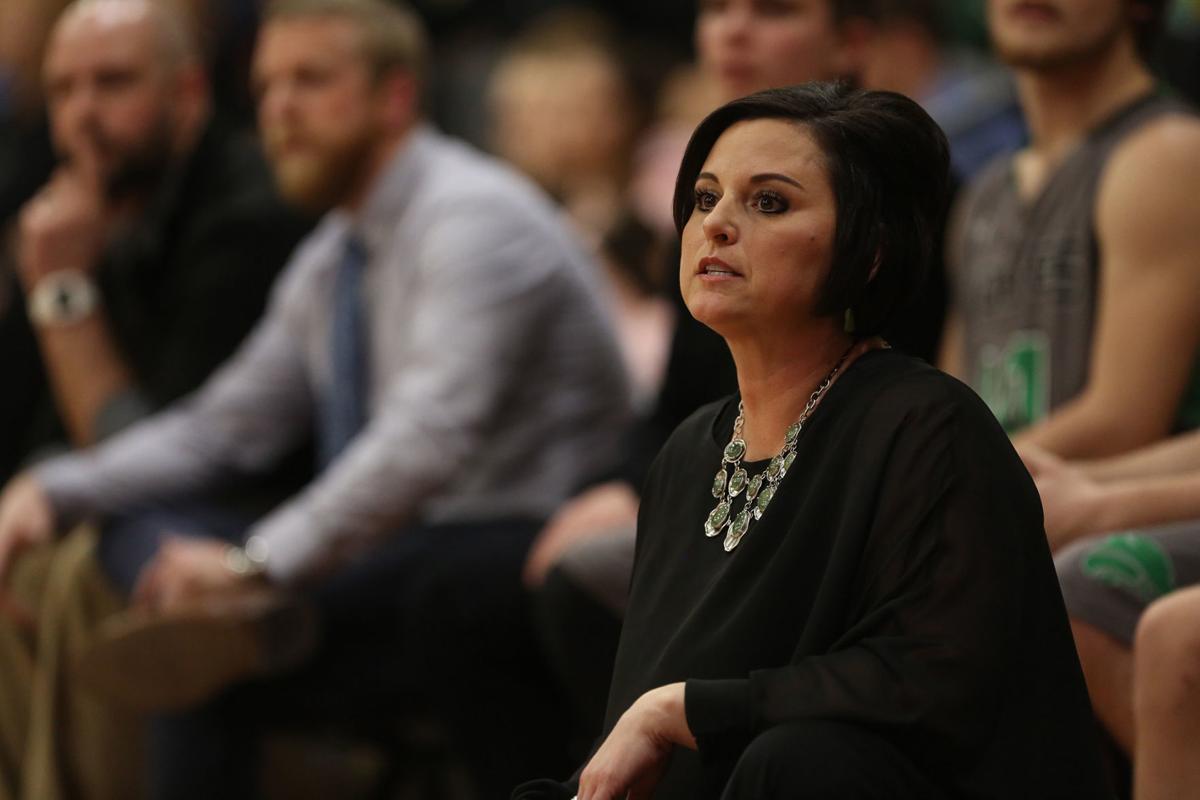 Green River’s head basketball coach Laurie Ivie watches her team take on Natrona County on Feb. 2 in Casper. Since Ivie took over, the Wolves have begun winning more consistently. They defeated their fierce rivals, Rock Springs, for the first time since 2012. 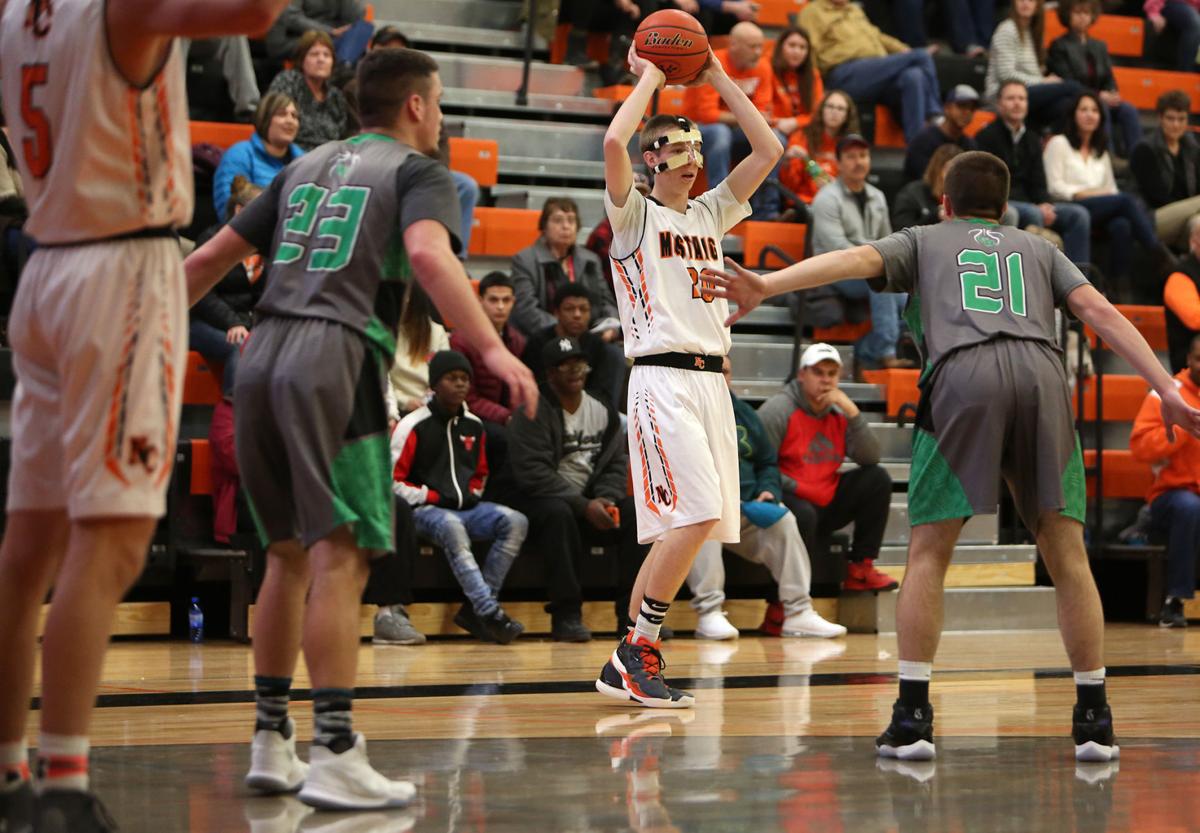 Natrona County's Brett Norvelle looks for an open player to make a pass during their Feb. 2 game against Green River.

It was only three minutes into the first quarter, but the Wolves trailed rival Rock Springs 10-2 in the Feb. 15 game.

Rock Springs had implemented a different defense than Green River expected — and it showed. The Wolves were apprehensive with ball movement and shot selection.

Green River head coach Laurie Ivie could see her team was jittery. The traveling Tigers fans hollered with the confidence of a team that had defeated its rival 12 straight times. Ivie called a timeout.

“We need to settle in,” she told her team. “We still look like deer in the headlights.”

She told the Wolves their energy needed to be all out. They needed to scrap, like they had so many times before.

Ivie’s speech worked. The Wolves forced a turnover on the first possession after the timeout. The Wolves converted on the other end. Then again. Suddenly, Green River had a 14-10 lead.

With 28 seconds left in the game, Ivie looked up at the scoreboard. Green River held a 10-point lead.

Ivie paced along the bench. It felt like the clock wasn’t moving at all.

Green River had just two upperclassmen and a record losing streak during Ivie’s first game as Wolves head coach. Now, in her third year at the helm, the Wolves were contending for an automatic bid into the state tournament.

The community embraced a team that just a few years earlier no one wanted to watch. The despondent days of a seemingly endless losing streak faded into distant memory.

The Wolves began the 2017-2018 season 7-0, their best starting record since the turn of the millennium. The perfect start to the season ended in a one-point loss to eventual state runner-up Sheridan. Following a 28-point victory over Laramie to end non-conference play, the Wolves were ranked for the first time in nine years.

The conference season, however, did not bring the same good fortune. Green River went 1-2 in its first three West Conference games, including two 16-point losses to Evanston and Rock Springs. Inconsistent play, the same issue that plagued the promising young team a year earlier, returned.

Ivie challenged her players to aim for the top of the conference ladder. No losses were acceptable, especially ones so lopsided. If this team wanted to achieve the dream of a state tournament bid, they needed to return to their scrappy roots, she reminded them.

Green River limped its way to Casper. Wearing warm-up shirts with the team motto — “It’s not about me. It’s about us.” — the Wolves prepared for a 32-minute battle with Natrona County.

Late points from junior Chase Stoeger and senior Chance Hofer — two of the young players Ivie had been focusing on since starting the job — secured a grueling victory.

Ivie’s concern then turned to the following game against defending state champion Kelly Walsh. The Trojans had run away from Green River by 21 points the year before.

Ivie paced the sidelines as she watched her team. During the game’s calmer moments, she crouched on the balls of her feet. She leaped up repeatedly to encourage her players or give them tips.

“Get there,” she repeated to senior Cameron Morris. “Good Cam!”

The final horn sounded. The Wolves won 57-39. It was the first time the team beat both Casper high schools since 1982.

“I feel like if we show up like we did tonight, we can play against anybody,” Ivie said. “We’re top contenders.”

The Wolves confidently boarded their bus and returned to Green River with a firm grasp on second place in the West Conference. All five remaining conference games were to be played at Wolves Gym. Hope for a state championship bid was tangible.

Ivie’s father, Ernie Dunn, watched from the stands at Jackson High School Gym as the Wolves prepared to play last month in a regional tournament. He had missed only one Wolves game during Ivie’s coaching stint.

After beating the Casper teams, the Wolves had gone on to lose four of their remaining five conference games. An automatic bid to the program’s first state tournament in nine years washed away. They needed to win one game at the regional tournament. A single victory separated Green River from ending a nine-year state tournament drought.

Core, the radio broadcaster, took to the airwaves in a plea to the community.

“These kids have earned Green River’s support,” he said.

Natrona County jumped out to an early lead. The Wolves did not score for the game’s first 4 minutes and missed routine layups. As Natrona County continually forced turnovers and started the second half on a 8-3 run to extend the lead to 42-25. Then bad turned to worse for the Wolves.

Senior Chance Hofer fell to the floor while attempting a rebound. The game halted while he clutched at his shoulder. The team’s leading scorer screamed in pain as he was helped to the bench.

When the game resumed, junior Chase Stoeger carried Green River at point guard. A starter since his freshman year under Ivie, Stoeger was not phased. He attacked the defense, Green River moved the ball and the baskets started to fall. Ivie alternated celebrating and pleading for more ball pressure.

The third-quarter buzzer sounded. Green River had cut the lead to 44-34. Hofer, still favoring his shoulder, checked into the scorer’s table and returned to the game for what could have been the final quarter of the season. An MRI would later reveal Hofer played the final quarter with a torn labrum.

The final buzzer sounded. Green River had come tantalizingly close but had fallen short. The chance to compete for the state championship evaporated.

“At that point we were in a good position,” Ivie said. “Got a turnover, big moment, one possession. Just couldn’t pull it out.”

Crushed and dejected, the Wolves returned to the locker room. The hours of film study, the grueling practices and trying bus rides ended in heartache.

“These kids have worked for this since the start of their sophomore year and it’s a powerful ending,” Ivie said. “It feels good after three years there to say we can compete with anyone in the state. But it’s still disappointing.”

Despite falling short of the tournament, the Wolves finished their season 14-8 — their first winning record since 2009. It’s an ending Ivie is proud of. She’s watched her players grow from inexperienced freshman to scrappy contenders. She watched as they learned that they could win. That if they worked hard, they could force a change.

“When I came in these were my babies and they started as sophomores,” Ivie said. “They didn’t want to own the 0-58 record because they weren’t part of it. And it was unacceptable. So they went to work.”

Ivie and her team also reinvigorated a love for basketball in Green River. Fans attend games. Younger students are practicing in hopes of someday joining the varsity squad.

“I do not have a gym in this town from elementary up where there’s not someone with younger kids playing basketball now,” Green River activities director Anthony Beardsley said. “There’s a lot going on and it’s extremely exciting. There’s more little kids’ basketball being played in Green River than has been played in a long time.”

Ten days after the season ended, the team regrouped one last time for the annual banquet. Seniors set to graduate in two months recapped their time playing basketball at Green River. They celebrated the program they had built. Ivie thanked her players for their dedication, for their work, for their trust.

The next day, she prepared workouts, camps and tournaments for the off-season. She thought of the promise in the upcoming freshman class, how she hoped to include them as much as possible. How perhaps they could be part of Green River’s eventual state tournament team.

“I hope that’s exactly where we’re headed,” she said.

This is a three-part series on the Green River Wolves and their coach, Laurie Ivie, who took over during a historic losing streak and attempted to rebuild the team.

The Rebound Part 2: After a historic losing streak, a new coach finally gets her shot

The Green River boys basketball team gathered inside their school on a bitterly cold day in January 2016. They had planned to travel across th…

The Rebound Part 1: A small town basketball team went years without winning. Would the streak ever end?

The Green River boys basketball team stood in the corner of their hometown gymnasium, waiting for the girls’ game to end. The crowd was small …

Green River’s Cameron Morris look to make a pass while jumping between Natrona County's Tehl Campbell and Phavian Gordy during a Feb. 2 game in Casper. The Wolves defeated Natrona County and Kelly Walsh on the road for the first time in the same season since 1982.

Green River’s head basketball coach Laurie Ivie watches her team take on Natrona County on Feb. 2 in Casper. Since Ivie took over, the Wolves have begun winning more consistently. They defeated their fierce rivals, Rock Springs, for the first time since 2012.

Natrona County's Brett Norvelle looks for an open player to make a pass during their Feb. 2 game against Green River.