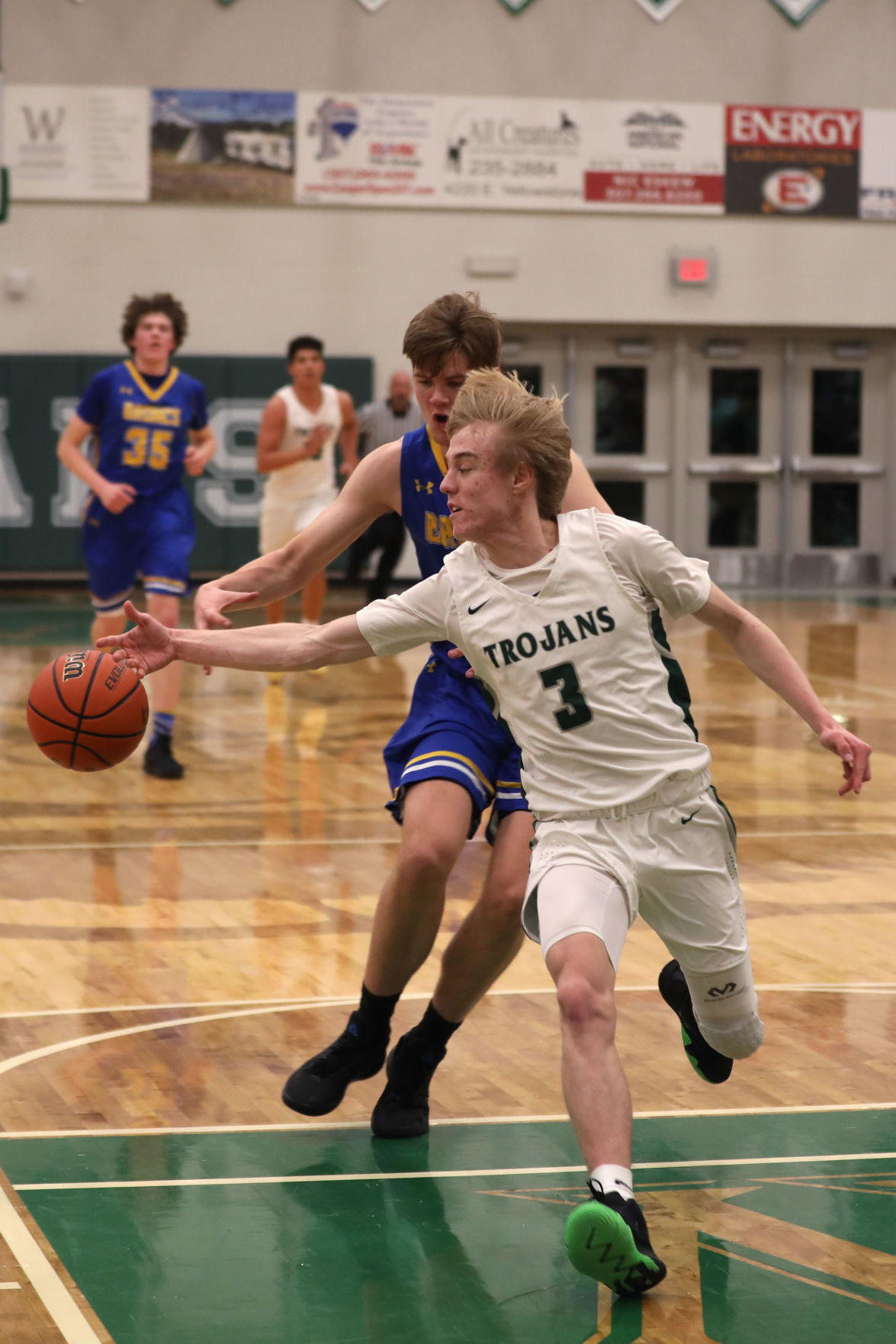 Kelly Walsh's Michael Bradley gets to a loose ball ahead of a Sheridan player during their game on Jan. 17 at Kelly Walsh High School in Casper.

Kelly Walsh senior Michael Bradley summarized Thursday night’s game against Sheridan with one drive to the basket and 2 minutes remaining on the clock. He took the pass at the elbow and weaved through two defenders before elevating for a layup at an angle. He couldn’t go up straight because a much taller Sheridan defender, 6-foot-7 senior Gus Wright, hovered over him ready to swat the 5-foot-10 guard’s effort into a nearby wall.

Bradley saw Wright step ever so slightly to the left and went up to the right. As long as he put it up fast enough, he thought, the big man couldn’t get there. He was right. Wright couldn’t believe it and the Kelly Walsh High School faithful in attendance roared. Somehow, despite nearly every statistical outlier, Kelly Walsh did it.

Bradley’s layup increased Kelly Walsh’s lead and a decisive corner 3 from junior Tyler Pacheco effectively put the game out of reach with just a minute left. The homestanding Trojans held on to beat Sheridan from there, 65-57.

“I thought we played really well for the challenge that was put up against us,” Bradley said. “Really big win for us.”

Kelly Walsh neutralized Sheridan’s size, both in Wright and with fellow big Sam Lecholat. Both averaged at least 17 points coming into Thursday. Wright finished with 16, just under his 18.4-point average, and Lecholat scored 11 — shy of his 17.5 average. The Trojans’ defensive game plan worked.

“Tonight we had some kids that expanded their roles defensively and rebounding-wise,” Kelly Walsh head coach Randy Roden said. “Our bigs aren’t bad size, we’re just skinny and young. I thought the kids battled with what they had, used their quickness and just were tenacious. We’ll have to do that because we’re going to be smaller than some of the teams we play and I thought our guys battled really hard.”

At too many points, Thursday night’s game resembled the previous meeting between the two. That 75-63 Sheridan win in the Casper Invitational was one of the outcomes that prompted a 2-hour renovation the following week of practice for the Trojans. With every open 3 allowed and sloppy turnover committed, the home team was brought back to those humbling beginnings last month.

But along with those pitfalls came an encouragingly active offense and attentive defense. The Trojans erased every single-possession or double-digit deficit all the same.

Even with a significant size disadvantage the Trojans created space and opportunity. They attacked the rim when needed, which put Sheridan senior standout Lecholat in foul trouble early. That evened the height differential enough for the home side to stay within striking distance. Also, the return of senior Kade Marsh from an ankle injury that had kept him out of the first month of the season helped.

“We haven’t had a lot of time together,” Roden explained. “We’ve had four-and-a-half practices where we’ve had everyone together out of 29.”

Sheridan led for most of the game until the scoreboard turned over to the final quarter. Kelly Walsh trimmed the lead to just two points going into the final 8 minutes and a Keaton Crilly jumper officially erased the deficit by tying the game at 49-all with 5:30 to play. Bastian Hansen followed that with a bucket of his own to force a Sheridan timeout with just under 5 minutes remaining. The momentum had shifted and Kelly Walsh didn’t let go from there.

Bradley followed his timely layup with two free throws to bring his effort to a game-high 20 points. He scored 15 against Sheridan in the first meeting. Isaiah Wiggins added 18 for the Trojans and Pachecho scored 12.

COMEBACK: Kelly Walsh trailed for most of the game but outscored Sheridan 18-8 in the fourth quarter to pull out the win.

HE SAID IT: "I thought we played really well for the challenge that was put up against us. Really big win for us." -- KW senior Michael Bradley.

Pretty wins don’t count extra. Style points have no impact on the standings. Luckily for Kelly Walsh, simply surviving counts all the same.

Remembering the 'Most Outrageous Play' in Casper basketball history

Behold, dear friends, the most creative sporting decision to ever occur on a Casper basketball court.

Kelly Walsh's Michael Bradley gets to a loose ball ahead of a Sheridan player during their game on Jan. 17 at Kelly Walsh High School in Casper.