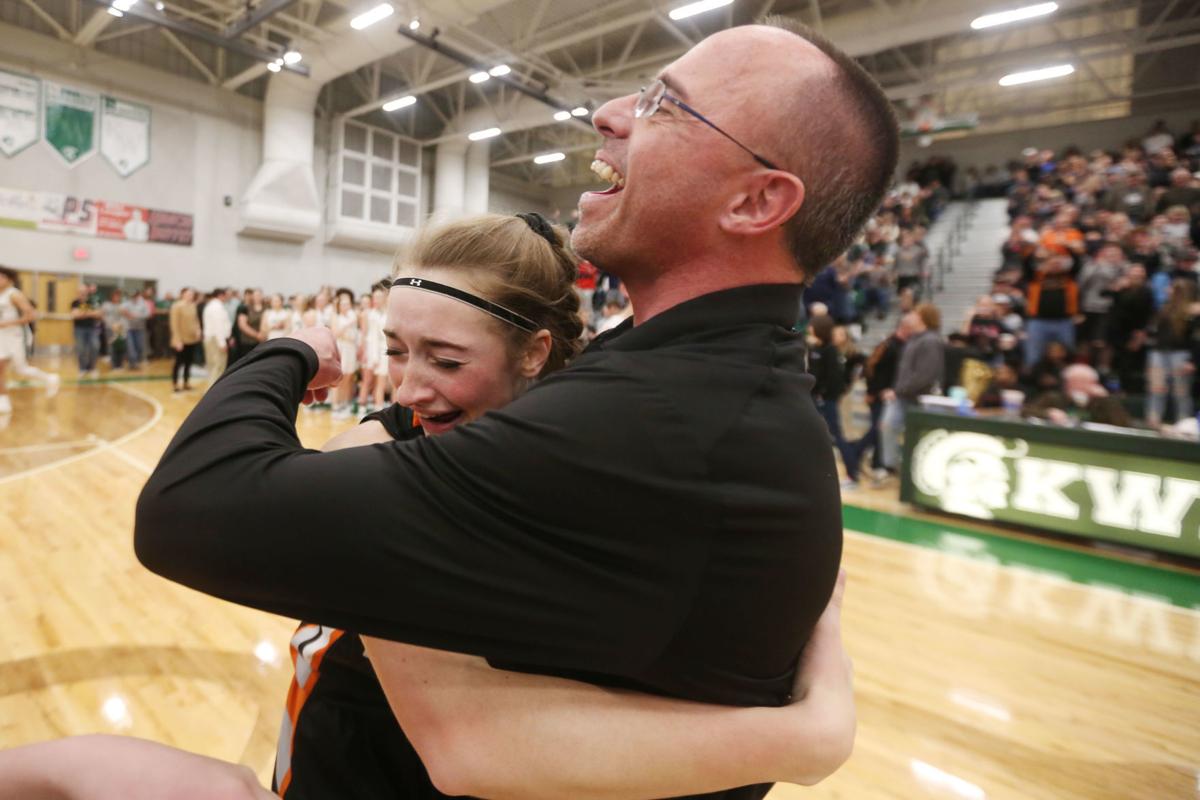 Natrona County's Katelynn Campbell hugs NC head coach Brian Costello after her 3-pointer at the buzzer lifted the Fillies to a 45-44 victory over Kelly Walsh in the Peach Basket on Feb.27 in Casper. 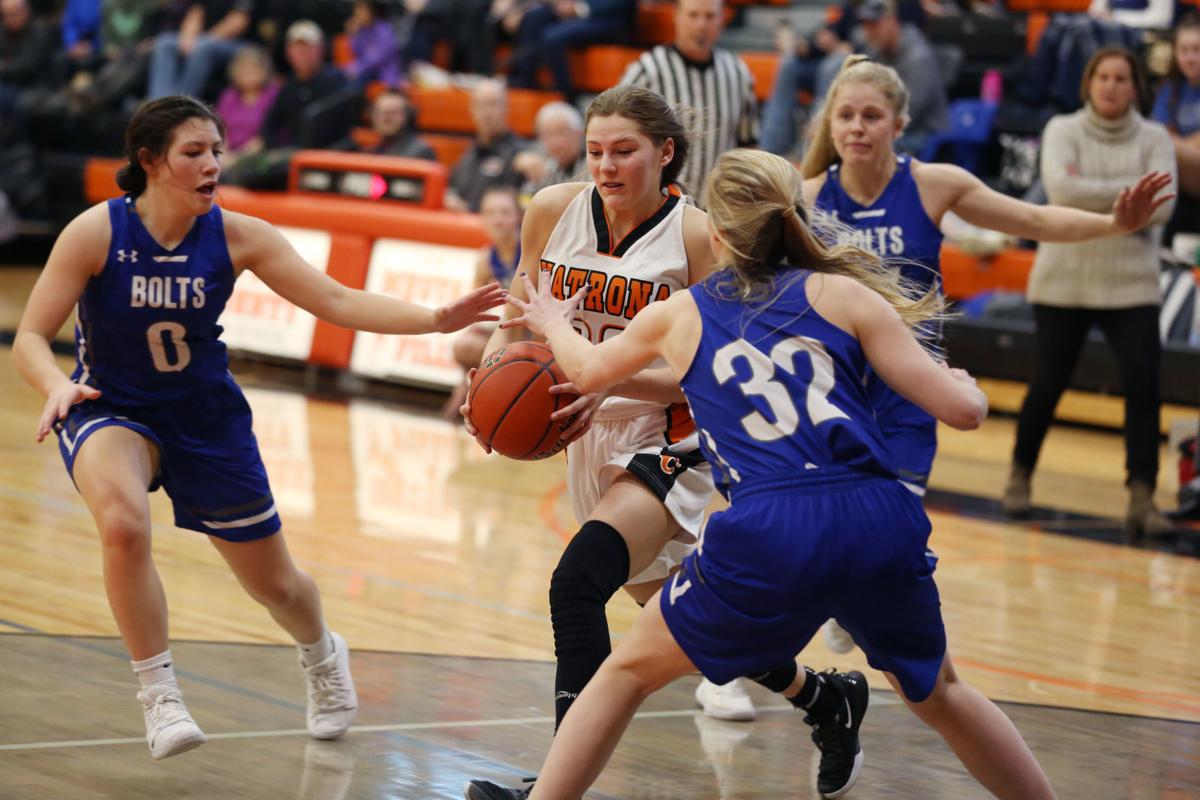 Natrona County's Emma Patik dribbles through the Thunder Basin defense during their game Feb. 20 at Jerry Dalton Gym in Casper. 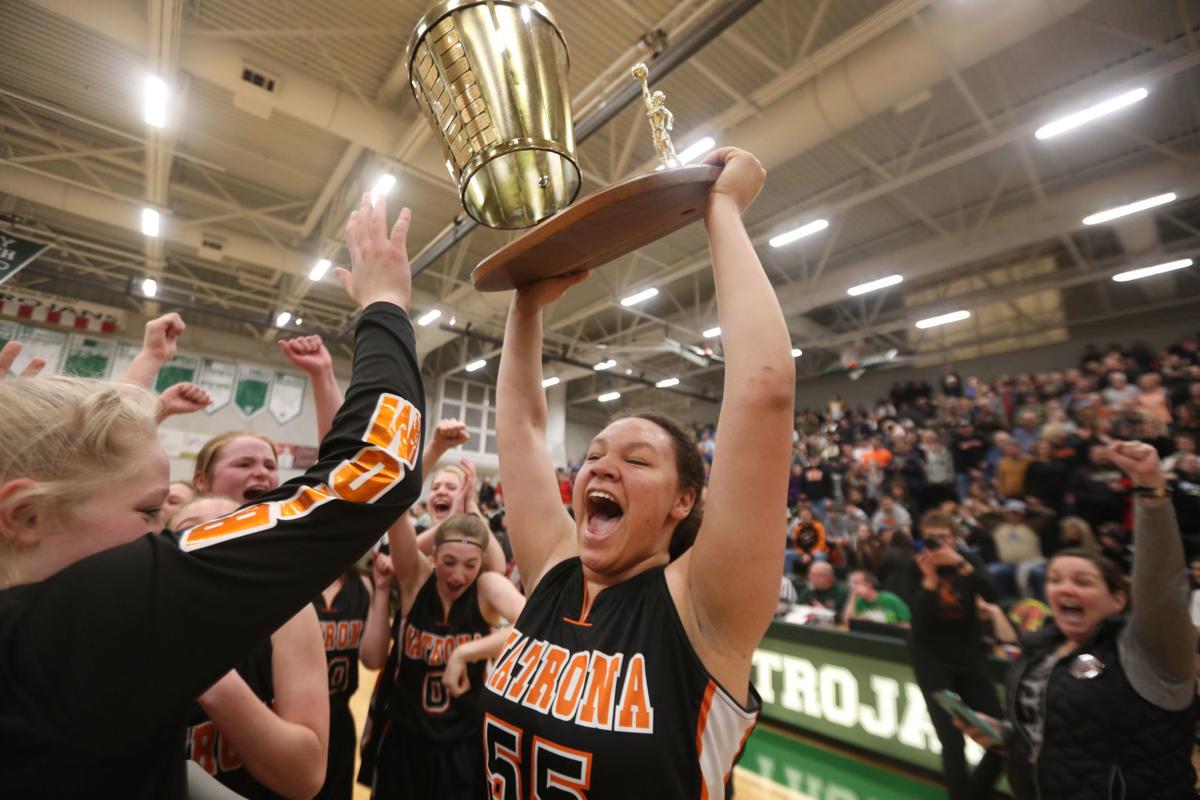 Natrona County's Alesha Lane holds up the Peach Basket trophy after the Fillies defeated rival Kelly Walsh on Katelynn Campbell's 3-pointer at the buzzer on Feb. 27 in Casper. 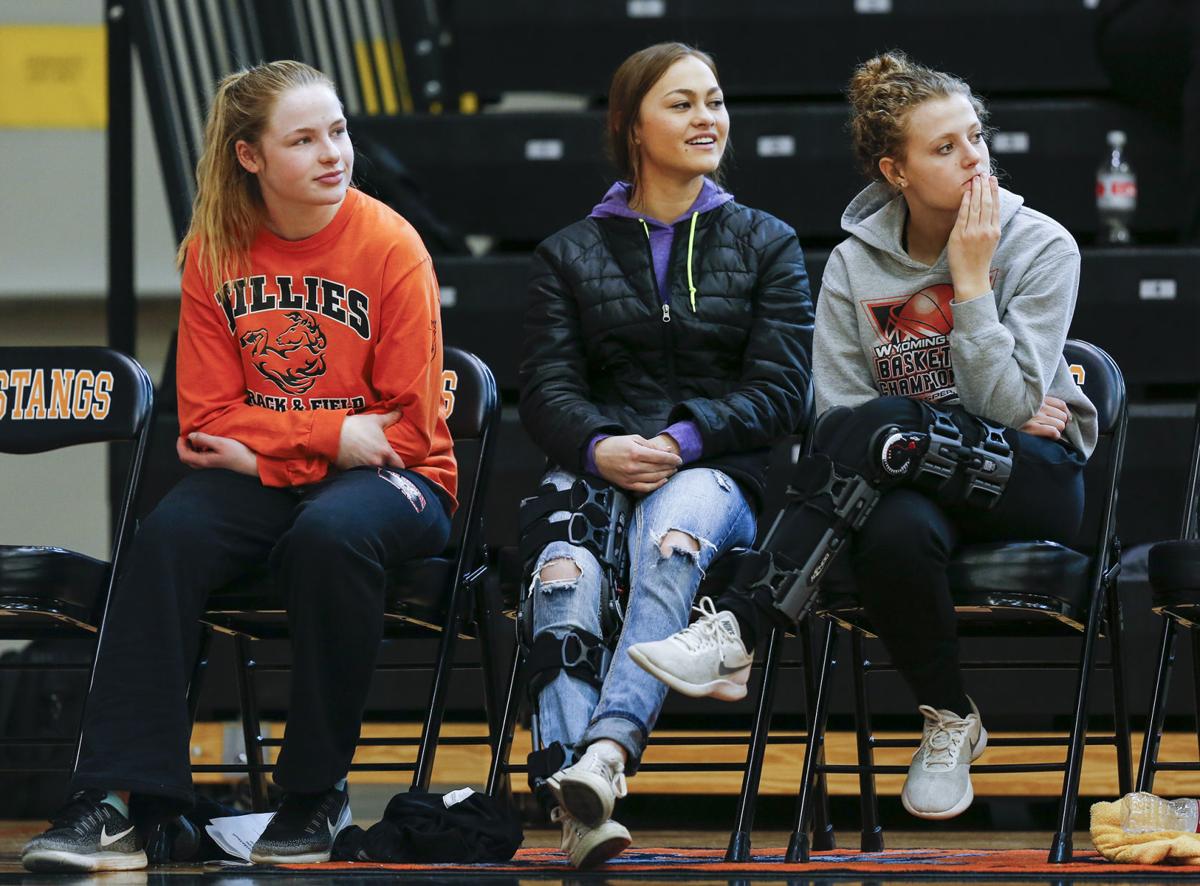 The Natrona County Fillies found themselves disadvantaged, struggling and with the cards stacked firmly against them. Trailing by two in the rowdy green-and-white Kelly Walsh High School Gym and in the midst of a Peach Basket drought with mere seconds remaining, the Fillies never panicked. They’d faced worse before.

Natrona County’s intended play was denied so they improvised. Sophomore Katelynn Campbell, a typical junior varsity sharpshooter, didn’t flinch as she delivered a game-winning shot from beyond 30 feet. That Feb. 27 game started the Fillies’ final weekend of the regular season and provided them an undercurrent of confidence going into last weekend’s regional tournament.

Through winning two games at regionals the Fillies successfully qualified for this weekend’s Wyoming State High School Class 4A Girls Basketball Championship. Their quarterfinal opponent — Kelly Walsh. History will happen regardless; either the Trojans win their first quarterfinal game in over a decade or the Fillies will have rebounded from historic struggles to state semifinalist in a calendar year.

Head coach Brian Costello thought about Campbell’s shot and how, if it didn’t go in, the Fillies would still be in the position they find themselves in going into the weekend. They’re back in the state tournament and not by luck.

“It’s not surreal to be playing at state because our kids have put the work in,” he said. “We expected to be better and we are.”

That all-time blip of a season needed to go in the rear view mirror, they thought. So during the summer the Fillies turned their open gyms into a competitive kiln for a successful team. They wanted to return Fillies Basketball back to the glory days of even just a few years prior.

“That season was rough and we came back during the summer and we were here every day,” senior Tessa Coughenour said. “We were putting it all out there.”

Costello knew last year’s team was better than they showed on the stat sheet. He saw the returning Fillies work throughout the summer and never doubted the turnaround.

“I could see it,” he proudly stated. “I was comfortable with where we were and we’re still going to get better.”

The summer forged the unfamiliar. Sophomore Emma Patik was at Buffalo last year and moved to Casper in time to catch those summer open gyms.

“At our open practices we were there to beat each other,” she said. “We’re best friends off the court but when we’re on the court at practice or in games you probably wouldn’t be able to tell.”

Natrona County started the season with eight wins in its first nine games. Three of those wins came over teams that made this weekend’s state tournament, including Kelly Walsh. The only loss in that stretch came to Green River, which the Fillies beat at the Taco John’s Invite later in that same stretch.

An 8-1 start to the season was a world away from where the Fillies were at that point a year prior. Not only did they know they put the work in to improve, they also saw tangible results and felt the confidence that their efforts made the difference between outcomes.

“That was reassuring because if we had put all that work in and still have been losing games then it would have been very disheartening,” Coughenour explained. “So it was nice just knowing it was paying off and we could do it.”

One of the team’s goals was restoring Filly basketball to the program’s previous glory. They’d do that or go down fighting.

And, off course, the season didn’t come without obstacles. The Fillies went 1-4 through a five-game stretch with a frustrating overtime loss to Thunder Basin and brutal losses to Cheyenne East and Cheyenne Central on consecutive nights. As bad as that was, it was nothing compared to last year. They’d get through it.

“When we lost a few and started losing we were able to come back and still continue to win those games after we had bad losses,” Patik said. “Like our Cheyenne games.”

The Fillies won three of their next four going into the Peach Basket.

Kelly Walsh led for most of it, rarely by more than 8 points. Natrona County cut that lead to 2 with possession and 5 seconds remaining. The ball was supposed to go to Lane in the post, who was supposed to score and send the game to overtime. Instead, the ball went out to the perimeter and found Campbell near the volleyball line. Her unwavering effort sailed through the net as time expired. She stood in disbelief, repeating a familiar phrase most adults instinctively blurted, while her Fillies teammates mobbed her at midcourt.

“I think we were all super pumped that we won and that leading us into regionals was really exciting,” senior Kylie Hilderbrand said.

Weeks afterwards, Costello calmly attested to his team’s character and resilience because he’s consistently seen it for months. That’s why the same head coach who’s giddy disbelief and unhinged jaw could shake that shot as a byproduct of his team’s effort instead of a determining factor toward it.

“Don’t get me wrong, I’m glad it went in,” he smiled. “They have worked hard enough that they are now truly confident and they’re not hoping to play good, they’re expecting to play good.”

That’s why they were slightly stung by the regional loss to Cheyenne East. They felt like they’d played well enough to win, except for offense. They went to dinner, rallied overnight and returned to beat Gillette to clinch a spot in the state tournament. It was the first time since the 2011-12 season that the Fillies had defeated Gillette twice in the same season.

Following a 10-point third-place game loss to Thunder Basin the Fillies are back in the state tournament. Coaches shared their bracket with the Fillies all week, a plain one-game bracket that shows only Thursday’s 10:30 a.m. quarterfinal at Casper College’s Swede Erickson Thunderbird Gym against rival Kelly Walsh.

Coughenour said it’s just another game for the Fillies. Patik still isn’t up to date with the Casper rivalry due to her Buffalo roots (“We’re gonna win, sorry guys” was her thoughts). They’re key parts of the Fillies’ guard-heavy force helping post stars Alesha Lane and Kate Robertson. Together, they’ve turned the page back toward success this season.

“I think getting to state feels pretty good,” Hilderbrand said. “We played pretty good at regionals so we feel confident.”

Added Costello, with a glint: “Last year is old news.”

BACK: The Natrona County Fillies return to the state tournament following a one-year absence.

HISTORY: Either Kelly Walsh will win its first quarterfinal game since 2009 or the Fillies will go from a one-win season to state semifinalist when the two play in Thursday morning's first-round game.

SHE SAID IT: "We’re best friends off the court but when we’re on the court at practice or in games you probably wouldn’t be able to tell." -- NC sophomore Emma Patik.

With the game up in the air and teeming with nervous energy, Wyoming Indian still had time. Head coach Aleta Moss called a timeout having seen…

Natrona County's Katelynn Campbell hugs NC head coach Brian Costello after her 3-pointer at the buzzer lifted the Fillies to a 45-44 victory over Kelly Walsh in the Peach Basket on Feb.27 in Casper.

Natrona County's Emma Patik dribbles through the Thunder Basin defense during their game Feb. 20 at Jerry Dalton Gym in Casper.

Natrona County's Alesha Lane holds up the Peach Basket trophy after the Fillies defeated rival Kelly Walsh on Katelynn Campbell's 3-pointer at the buzzer on Feb. 27 in Casper.