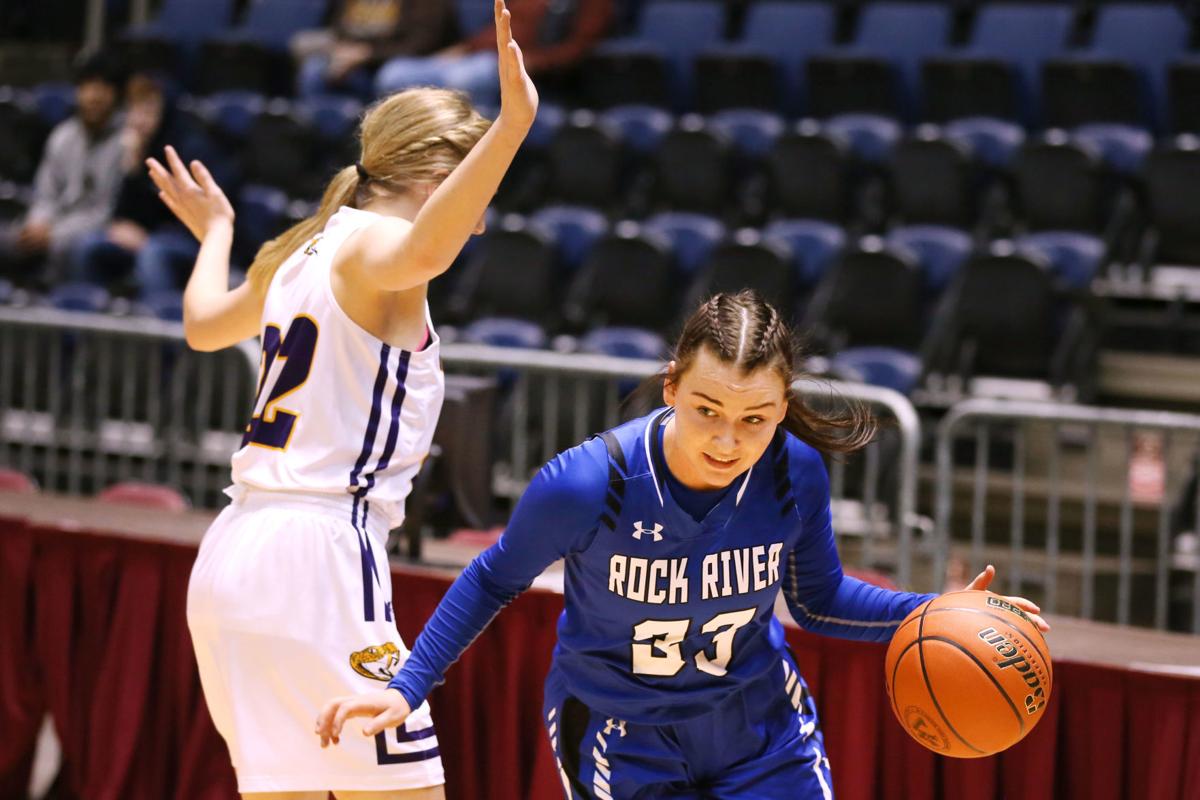 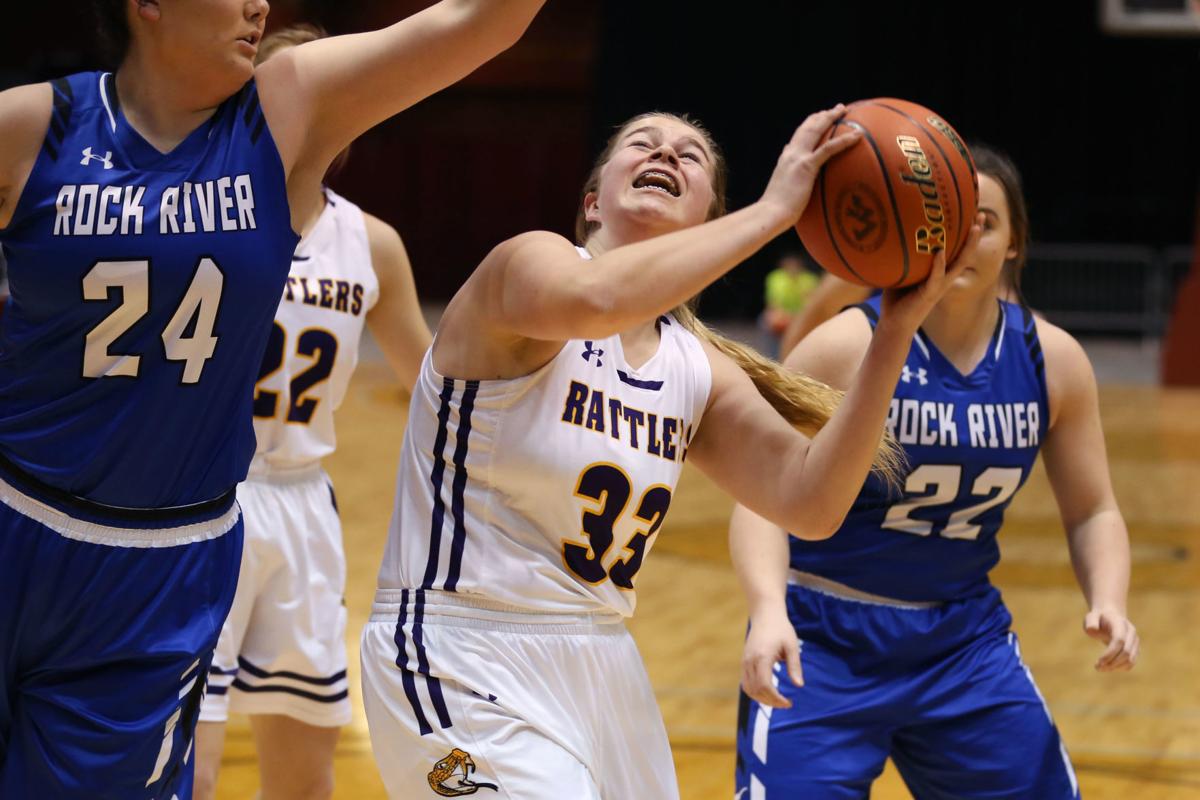 Snake River's Hannah Sixkiller tries to shoot against Rock River's Lydia Moore in the quarterfinals of the Wyoming State High School Class 1A Girls Basketball Championship on March 5 at the Casper Events Center.

After years of frustration, the Rock River girls basketball team has established itself as a perennial state tournament qualifier. The Longhorns qualified for state in 1987 but didn’t make it there again until 2016 – a span of 28 years that included two seasons when Rock River didn’t field a team and six seasons when it failed to win a game.

In the past five years, however, the Longhorns have advanced to state four times. In 2017, they won their first state tournament game, defeating Arvada-Clearmont in the consolation semifinals. And on March 5 of this year, the Longhorns took another step forward with a 52-48 victory over Snake River in the quarterfinals to advance to the semifinals for the first time in program history.

Even though Rock River lost to Kaycee in the semifinals and Upton in the third-place game, the groundwork laid down by seniors Lydia Moore, Delaney Qualls and Annetta Broyles should keep the program moving in the right direction.

“They helped us promote a culture,” head coach Ty Vallier said in a phone interview. “They worked hard in practice and that kind of had a trickle-down effect with the rest of the team.

“They’ve built this program to a point to where we’ll have success even after they’re gone because they instilled that mentality in our younger girls.”

That mentality was apparent shortly after last year’s promising season came to a crushing end. Rock River entered regionals with a 19-2 record, but with numerous players dealing with bronchitis, it went 1-2 and failed to qualify for state.

“Losing at regionals was tough,” Qualls said, “but I can definitely say that for us three seniors there were no tears shed. We knew we had another season.”

For Qualls, her senior season came with added urgency. The 5-foot-4 guard played at Pinedale her freshman season and at Laramie the following year before she and her family moved to Rock River. Neither the Wranglers nor the Plainsmen qualified for state those seasons.

Qualls earned all-state honors each of the past two seasons. She averaged 17.4 points per game this year and made 12 of 19 3-pointers and scored a state-best 44 points in a victory over Guernsey on Feb. 22. In the quarterfinal victory over Snake River, she had a game-high 24 points, including a late 3-pointer to seal the win.

“Delaney brought passion to every game and every practice and it really was infectious throughout the whole program,” Vallier said. “Getting Delaney really opened up our offense. With the way she can shoot it opened up things in the middle for Lydia because it made us more balanced.”

Unlike Qualls, the 6-0 Moore played all four years for the Longhorns. Despite not playing basketball until junior high school, she was an all-conference selection all four years and earned all-state honors as a freshman and sophomore.

“I came in as a freshman having only played two years,” Moore laughed, “but the team seemed pretty experienced so I figured I better start learning. It’s just crazy to think about how far I came as an individual and how far we came as a team.”

Moore’s senior basketball season almost never got off the ground, however. She broke her foot on Nov. 2 at volleyball regionals and waited impatiently for her doctor to say it was OK to play.

She sat on the bench, offering encouragement to her teammates and learning the finer aspects of the game from Vallier and assistant coach Jeremy Qualls.

“I saw tremendous growth in Lydia because she put in a lot of time and work,” Vallier offered. “And when she had to sit out because of the injury I saw a lot of growth with the mental aspect of the game.”

“Mr. Qualls told me I was going to learn more by sitting and watching just because I was able to see things differently,” she said “And that’s going to help me in the long run.”

But with her senior season slipping away, Moore felt she needed to finish it on the court.

“Eventually I just told my doctor that it was my senior season and I couldn’t be sitting out any more games,” she said. “I got him to sign the release and I started practicing that day. I came back about two weeks out from regionals.

“The doctor wasn’t going to clear me, I had to convince him. He said, ‘It’s not a good idea to play on it because it’s still broke.’ I told him, ‘You don’t understand. This is my senior season and we’ve got to do some things.’”

They did. With Qualls providing the scoring punch, Moore adding an inside presence late in the season and Broyles serving as the lock-down defender, the Longhorns made history.

Qualls will continue her basketball career at Rocky Mountain College in Billings, Montana, while Moore signed with Northwest College in Powell. But they’ll always be Longhorns at heart.

“It was definitely a strange season,” Moore admitted, “but looking back on it makes me happy to know that I was on a team that made history. As cheesy as it sounds, we had a family bond on our team and our coaches were amazing.”

Added Qualls: “It feels like I’ve been playing there for a very long time just because of the sense of community and the family atmosphere in Rock River.”

HISTORY MAKERS: Moore helped lead the Longhorns to their first state tournament win as a sophomore and combined with Qualls to lift Rock River to its first state semifinal appearance in March.

HE SAID IT: “They helped us promote a culture. They worked hard in practice and that kind of had a trickle-down effect with the rest of the team." -- Rock River head coach Ty Vallier.

Snake River's Hannah Sixkiller tries to shoot against Rock River's Lydia Moore in the quarterfinals of the Wyoming State High School Class 1A Girls Basketball Championship on March 5 at the Casper Events Center.