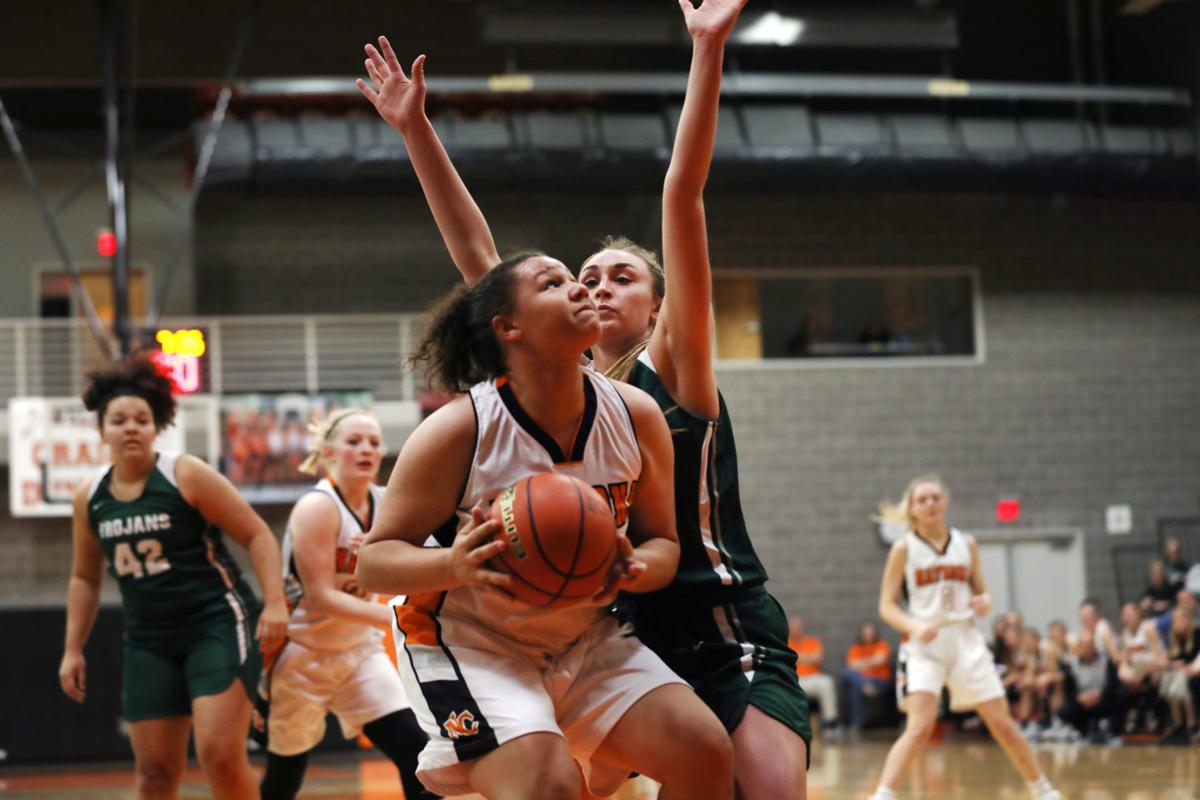 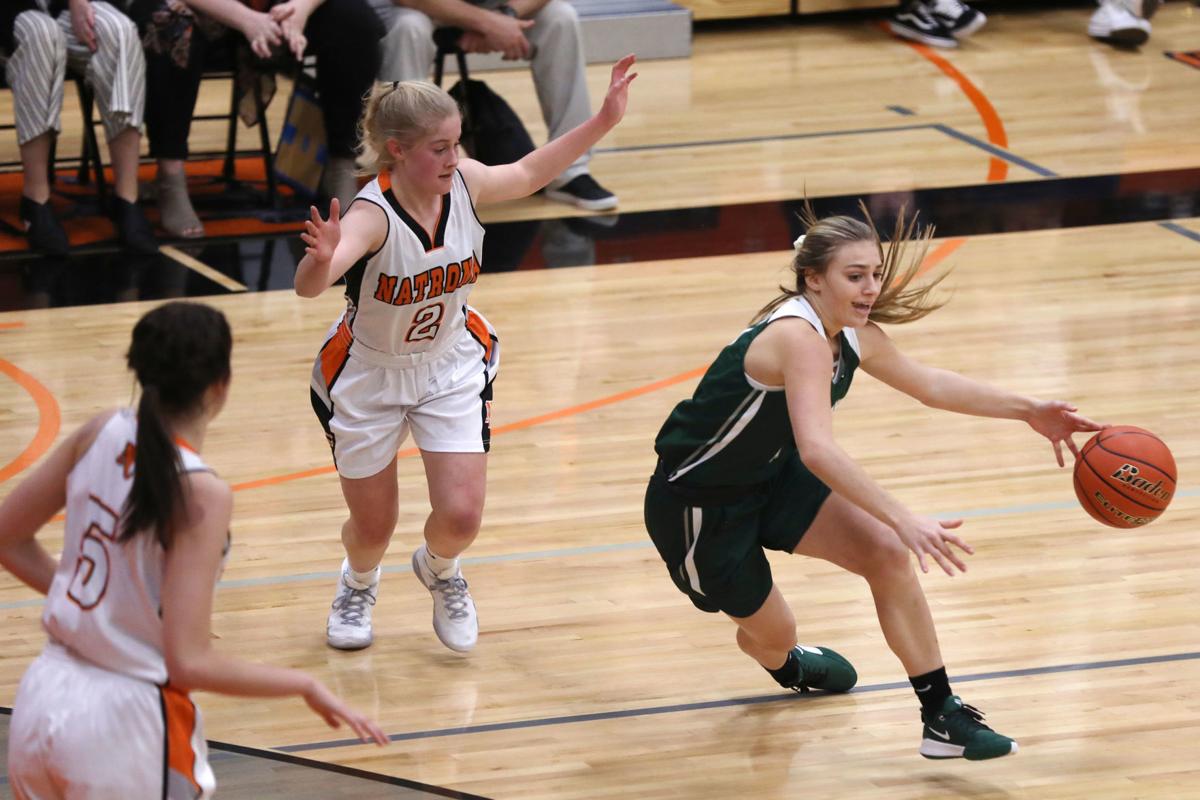 Kelly Walsh's Barrett Lloyd dribbles through the Natrona County defense during their game Thursday at Jerry Dalton Gym in Casper.

Four games into the 2019-20 campaign, Natrona County doesn’t look anything like the team that went 1-20 last season. That was apparent Thursday as the Fillies outscored rival Kelly Walsh 9-2 over the final 6 minutes, 45 seconds to improve to 3-1 with a 47-42 victory at Jerry Dalton Gym.

Kelly Walsh senior Jayla Johnson hit a transition 3, her third of the game, to give the Trojans a 40-38 advantage. But Kelly Walsh managed just a short baseline jumper from Logann Alvar in the final minute as the Fillies snapped a four-game losing streak to their crosstown rivals.

“We didn’t waver when they took the lead,” Natrona County head coach Brian Costello said. “We did a lot of good things as a team tonight and we definitely earned this win.”

Following Johnson’s 3-pointer, Natrona County sophomore Alesha Lane scored off an assist from Brooke Hytrek to tie the game at 40-all with 2:04 remaining. On the other end of the floor, the Fillies locked down on the Trojans’ interior game and sophomore Emma Patik created havoc with her ball-hawking on the perimeter.

And the Fillies capitalized on the offensive end by making their free throws down the stretch. Lane and senior Kate Robertson combined to go 7 of 8 from the charity stripe.

“We always focus on free-throw shooting,” said Robertson, who signed with Casper College last week, “but we really focus on them at the end of the game.”

The Trojans (3-2) jumped out to a quick 5-0 lead behind a 3-pointer and a fast-break layup from Johnson. Natrona County fought back to tie the game at 11-all on a baseline turnaround from Robertson and again at 13-all on a steal and layup from Kylie Hildebrand just before the first-quarter buzzer.

The teams remained in lock-step through the first 5 minutes of the second quarter before Lane put together a personal 6-0 run to give the Fillies a 27-21 advantage. Lane got things started with a put-back after Natrona County had already grabbed two offensive rebounds. She then got free inside for an easy basket before capping the burst with a layup off a pick-and-roll.

“When Alesha gets going no one can stop her down there,” Robertson said of Lane, who finished with a career-high 20 points.

Lane scored the opening basket of the second half to help the Fillies match their biggest lead of the game at 29-23. But a 3 from Johnson, who had a team-high 15 points, and a runner from Barrett Lloyd cut the Natrona County lead to 29-28. With the Kelly Walsh defense turning its focus to Lane, senior Haley Gibson made them pay with a 3-pointer.

“Everyone contributed tonight,” said Robertson, who added 12 points. “On certain night we’re going to have certain people who step up.”

That was Lane on Thursday. In addition to doing it on the offensive end, she was largely responsible for helping limit Kelly Walsh senior Corin Carruth to six points.

“This just feels so good,” said Lane. “We had a great crowd and we played good defense as a team. And to help our seniors finally beat KW makes it even better.

“Right now we’re just playing with a lot of confidence and we’re executing on both ends of the floor. As a team I think we’re starting to figure out what we’re capable of.”

According to Costello, the second-year coach who is in his second stint leading the Fillies, his team has undergone almost a complete turnaround from last season.

“This group of girls came together back in June,” he said. “And right now there’s no reason to believe that we can’t win every game we play.

“This team is as confident as I’ve ever seen them. And you can’t fake confidence.”

DOWN THE STRETCH: Natrona County outscored Kelly Walsh 9-2 in the final 6:45 to snap a four-game losing streak to the Trojans.

HE SAID IT: "We did a lot of good things as a team tonight and we definitely earned this win." -- Natrona County head coach Brian Costello.

Kelly Walsh shows promise for exciting 2020 with win over Sheridan

Kelly Walsh trailed early before pulling away for the victory.

Now a senior on the Arizona State basketball team, former Sheridan standout Robbi Ryan reflects on her time growing up in Wyoming.

Kelly Walsh's Barrett Lloyd dribbles through the Natrona County defense during their game Thursday at Jerry Dalton Gym in Casper.