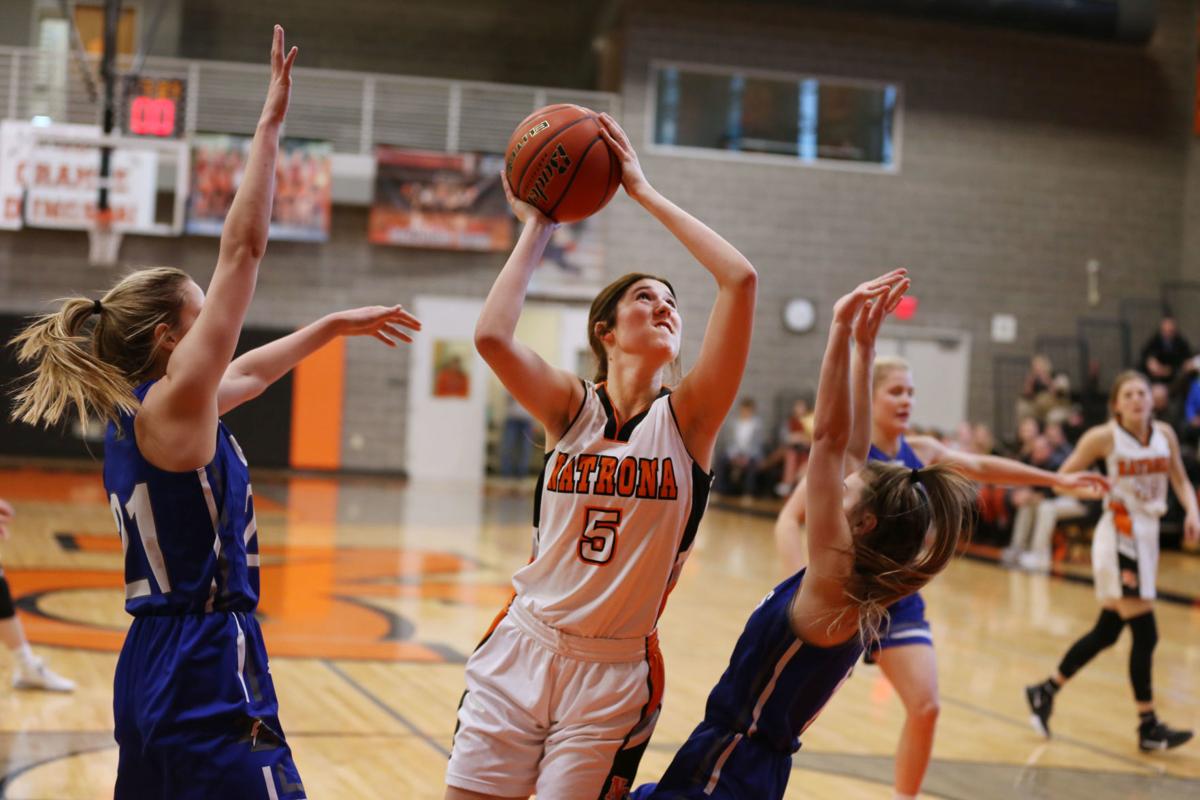 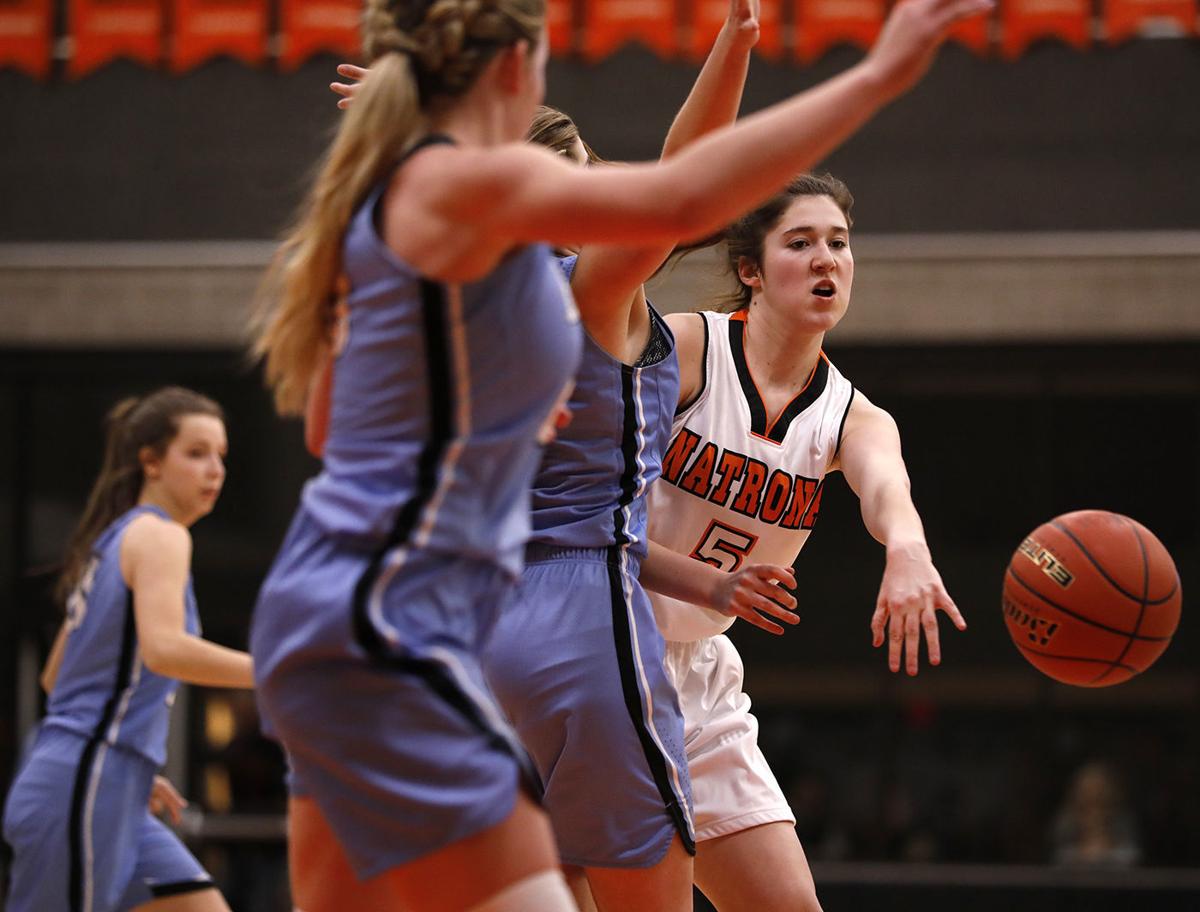 Natrona County's Kate Robertson passes the ball around a group of Cheyenne East players during their game on Feb. 1, 2019 in Casper.

Leading rival Kelly Walsh by two points late in their game on Dec. 19 last season at Jerry Dalton Gym, the Natrona County Fillies gathered around head basketball coach Brian Costello during a timeout. The Fillies had won two of their first three games to start the season – after going 1-20 the year before – but had lost four in a row to the Trojans.

Costello grabbed the whiteboard and was ready to draw up an inbounds play for the Fillies, who had possession underneath their own basket. Instead, Costello turned to his team and asked what play it wanted to run. Senior Kate Robertson wasted no time in speaking up.

The Fillies broke the huddle and lined up as the Trojans got ready to defend. Robertson slipped to the basket and took a pass from sophomore Tamryn Blom. Robertson scored and was fouled. She completed the old-fashioned three-point play and Natrona County held on for a 47-40 victory.

“That play basically won the game for us,” Costello said. “That just shows the ownership Kate has and how important it was to her.”

The victory helped propel the Fillies to an 8-1 start. A loss to defending state champion Thunder Basin on Feb. 20 dropped them to 11-6, but they came back two days later to defeat longtime nemesis Gillette for the first time since 2015. Five days after that sophomore Katelynn Campbell hit a buzzer-beating 30-footer to lift Natrona County to a 45-44 victory over Kelly Walsh.

The Fillies and Trojans were scheduled to meet for a third time in the first round of the Wyoming State High School Basketball Championships before the tournament was canceled on March 12 because of the coronavirus pandemic. Just like that, NC’s turnaround season was over.

“It wasn’t an overnight thing by any means, it took months,” Costello said. “We got Brooklyn (Hytrek) and Haley (Gibson) back (from ACL injuries), and our sophomores got better and understood what it took. It was a combination of the seniors becoming good leaders and setting the tone that it was ‘We Before Me.’ It was a total team effort.”

And it started not long after the one-win campaign of the previous season. The 6-foot-1 Robertson, who entered her varsity campaign as a two-year starter and three-year varsity contributor, played a significant role in getting the Fillies’ program back on track.

“She was a big part of that turnaround beginning on May 1 when we started with some open gyms,” Costello stated. “She was the first one in the door and she never missed an open gym. Kate and the rest of the seniors helped bring our kids a long way. They just put their heads down and went to work.

“I’m sure they had some doubt in their minds,” he added, “but when we started 8-1 their attitude changed and from then on they believed in each other and they believed in themselves. And then they were able to commit to playing winning basketball.”

Robertson averaged 11.0 points, 8.0 rebounds and a team-leading 2.5 assists per game. She and sophomore Alesha Lane were all-state selections. More impressively, Robertson and fellow seniors Tessa Coughenour, Kylie Hilderbrand and Gibson reestablished Natrona County as one of the top programs in 4A after a disappointing junior campaign.

“We’ve been playing together since fourth-grade travel ball,” Robertson said. “And not just playing together, but being close friends in school and on the court. Those are definitely friendships and memories that I’ll remember forever.

“I think last year motivated us even more to work hard and get back to competing with the top teams in the state,” she added. “I grew up watching my sisters Megan and Emily play on really good teams and having a lot of success, so last year was hard because Natrona has a reputation for having a really good basketball program.”

That also holds true for Casper College, which is where Robertson will play next year. The Thunderbirds are coming off their second Region IX championship in three years under head coach Dwight Gunnare.

“Kate grew so much over the last two years,” Costello said, “from being a player who played off others and mainly looked to rebound and play defense to being able to step out and shoot 3s and drive to the basket.

“I think she’s taken a path that has set her up to have success at Casper College. And she’s the type of player that when she is surrounded by really good players I think her basketball skills will show through even more.”

While Robertson is obviously disappointed her senior season didn’t come with closure on the hardwood, she’s ready to continue her basketball career at Casper College.

“To be around girls that have the same love for the game as me, and that are ready to play at the next level has me really excited,” she admitted. “I just want to be the best I can be and hopefully I can move up to the next level after my two years at Casper.”

THE TURNAROUND: After finishing 1-20 last year the Fillies went 16-8 this season and qualified for the state tournament.

HE SAID IT: "Kate and the rest of the seniors helped bring our kids a long way. They just put their heads down and went to work." -- NC head coach Brian Costello.

Longhorns advanced to state semifinals for first time this season.

Natrona County's Kate Robertson passes the ball around a group of Cheyenne East players during their game on Feb. 1, 2019 in Casper.