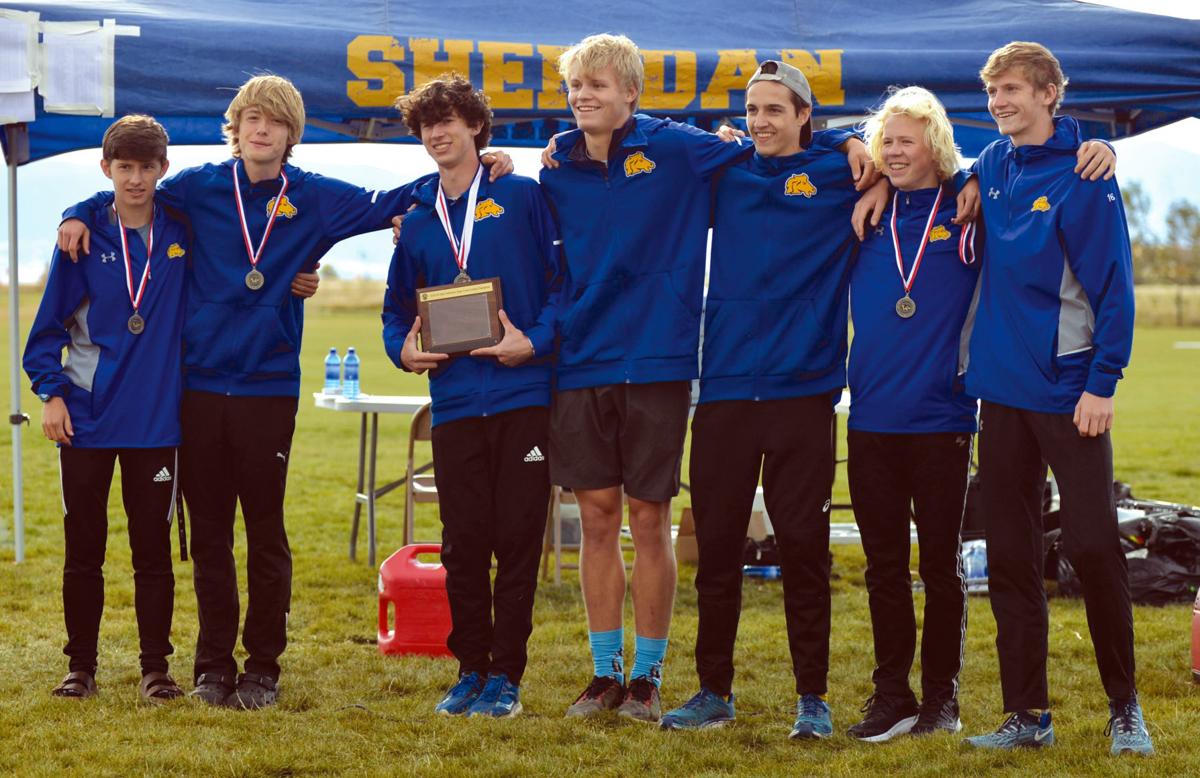 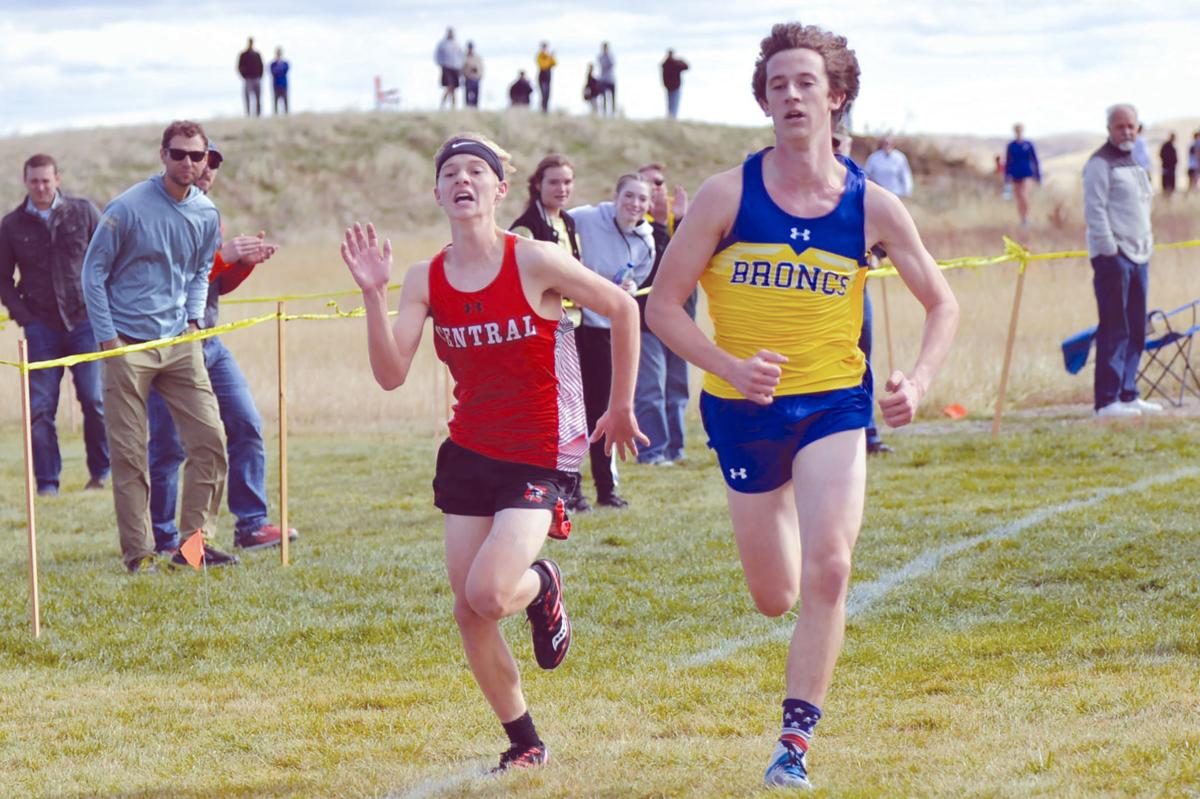 Sheridan's Alex Garber moves into second place in the final stretch before the finish line during the Class 4A East Regional meet on Oct. 18, 2019 at the Veterans Administration Hospital grounds in Sheridan.

Forged by practices running up the mountain and late-night drives back down, the Sheridan boys cross country team arrived in Afton last fall for the state meet feeling confident. Head coach Art Bauers had conditioned his team for months. He talked about the new state venue’s hills being the toughest he’d ever seen. Timothy Brown’s first impression was that it wasn’t as bad as his coach said.

The Broncs warmed up, stretched and walked to the starting line, hoping to bring their hard work to fruition. They had a strong senior class and a promising freshman to guide them. They performed well, maintaining a steady pace up until the final 100 meters when Reese Charest, the typical No. 5 on the team, burst through the middle pack.

“We only focused on what we’d do,” Bauers remembered. “I asked the boys what that did and they said when they saw Reese they knew they were having a good race.”

Charest finished fifth on the team and 14th overall. Placing five in the top 14 spots gave Sheridan a 17-point lead at the top of the standings. With that clearance came the program’s first cross country state championship.

Brown, a senior, finished 11th overall and third on the team. He was one of the Broncs’ top seniors, alongside Alex Garber, all season. Brown first got the inkling they’d accomplished their goal when a Cheyenne East coach congratulated them. Brown still walked away in an attempt to temper his expectations. Garber finished just ahead and brought freshman Austin Akers in for a group hug at the finish line. Together they waited. The announcement came minutes later.

“Sophomore and junior year felt like we were leading up to something,” Brown described. “It was always like we’ll get them next year. Then this year came and we thought we’ve actually got to get the work done here.”

Sheridan won the East Conference last year but fell flat at the state meet on the familiar ground of the Veterans Affairs Hospital. Bauers said they ran well but not well enough to secure a trophy. They internalized that and went to work in the summer.

Some members of the team ran distance during indoor and outdoor track seasons. Some went to the Simplot Games. Bauers remembered a friend, a coach in Idaho, commenting that the Broncs he saw were ready for a state championship. Those same Broncs came motivated in the summer and bonded together. Garber, Brown and junior David Standish had ran together for years. The addition of sophomore Charest and freshman Akers didn’t hinder their bond at all. They improved it. By the time they returned to Wyoming from a summer camp in Spearfish, South Dakota, they’d become contenders.

“Our kids were just committed to each other and it’s the ‘next man up’ philosophy,” Bauers said. “It didn’t matter who was feeling great, someone was going to take charge. We were going to go get it. They pushed themselves with everyone on the team making sacrifices.”

Over the course of the season the Broncs won every in-state race. That primed them for the season finale and a final opportunity for gold.

For years the state meet had been held on the campus of the VA Hospital in Sheridan. That course was susceptible to high winds with one challenging hill and an impressive view. This past fall the meet moved to Star Valley View Golf Course in Afton, home of Class 3A power Star Valley and a 130-feet incline throughout. That posed an issue for the Broncs because they live at 4,000 feet above sea level. Afton sits at 6,300.

“From a coaching standpoint, and I’ve done it 30 years, it’s the toughest course I’ve been on,” Bauers testified. “We just prepared for it. We knew we’d have to travel and we did. We’d have go up to run at altitude. We needed to get to the mountain.”

So for months the Broncs got on the bus and rode to run until dark. They didn’t get home until nearly 8 p.m. The bus trips alone took 3 hours round-trip. Coaches started bringing food on board because waiting longer than 90 minutes after a workout to replenish wouldn’t have been good for their bodies. They were tough practices. But the runners knew why.

“It felt like the second half of the season, after we’d been doing it, that it would pay off,” Brown said.

The Broncs arrived in Afton calm. They treated it like any other race. Bauers noted that was either an encouraging sign or a deeply troubling one. When the starting gun sounded he knew the answer. When the final scores were tabulated they all knew. Their hard work finally paid off.

As an encore the team ran at Nike Cross Regionals in Boise, Idaho. Bauers has typically taken his teams to a regional race in Sioux Falls, South Dakota, that kept them from scoring. This time he felt his team was capable of making a run at the scoring title.

Garber, Brown, Akers, Standish and Charest all helped Sheridan win the state indoor team title by 50 points. They could have gone for the treble had it not been for the coronavirus that forced the spring season’s cancellation. That came as a disappointing finale for the seniors, although some expected it. Luckily, Garber and Brown have futures in running. Brown has signed to run at Black Hills State while Garber will go to North Dakota and run at the University of Mary. The rest get another chance.

The departing seniors have found comfort in their new homes and excitement on the horizon. The coaches they leave behind admitted their impact won’t soon wear off.

“The coaches will remember this group because the seniors on this team were so inclusive of everybody,” Bauers said. “Not just varsity. They wanted every single runner to come along. We’ll remember that.”

WELCOMING: Garber and Brown welcomed freshman Austin Akers and everyone in between to push each other in order to secure the title.

HE SAID IT: "It felt like the second half of the season, after we'd been doing it, that it would pay off." -- Brown.

Sheridan's Alex Garber moves into second place in the final stretch before the finish line during the Class 4A East Regional meet on Oct. 18, 2019 at the Veterans Administration Hospital grounds in Sheridan.