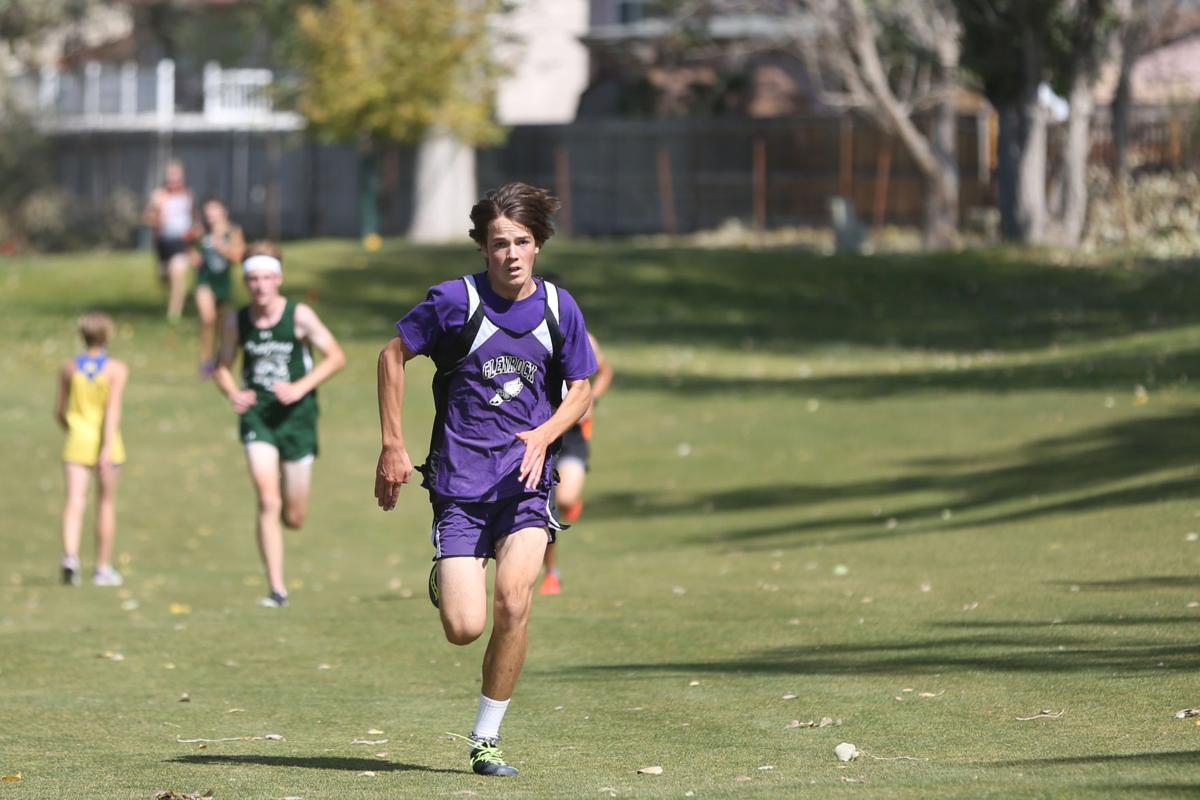 Glenrock's John Halvorsen pushes through the last leg of a race toward the finish line during the Glen Legler Memorial Invite on Sept. 24 at Paradise Valley Country Club in Casper. 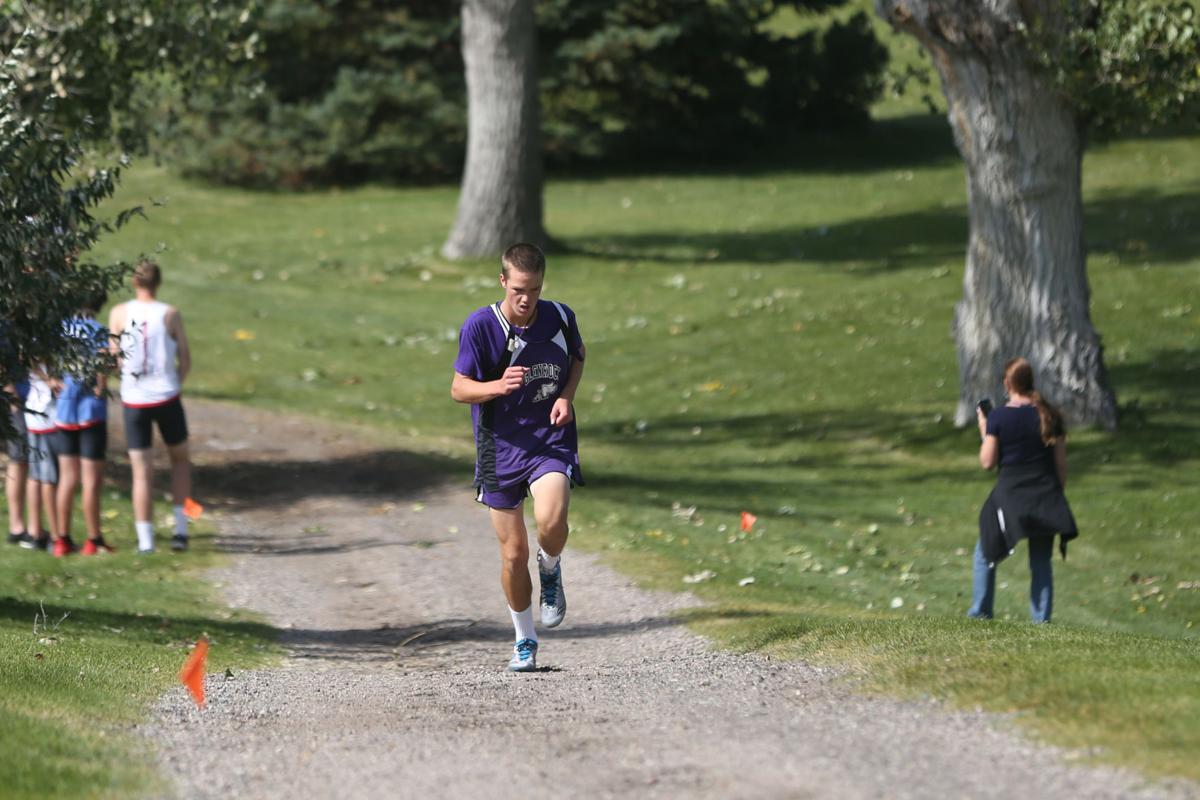 Glenrock's James Halvorsen runs up a hill during the Glen Legler Memorial Invite on Sept. 24 at Paradise Valley Country Club in Casper. 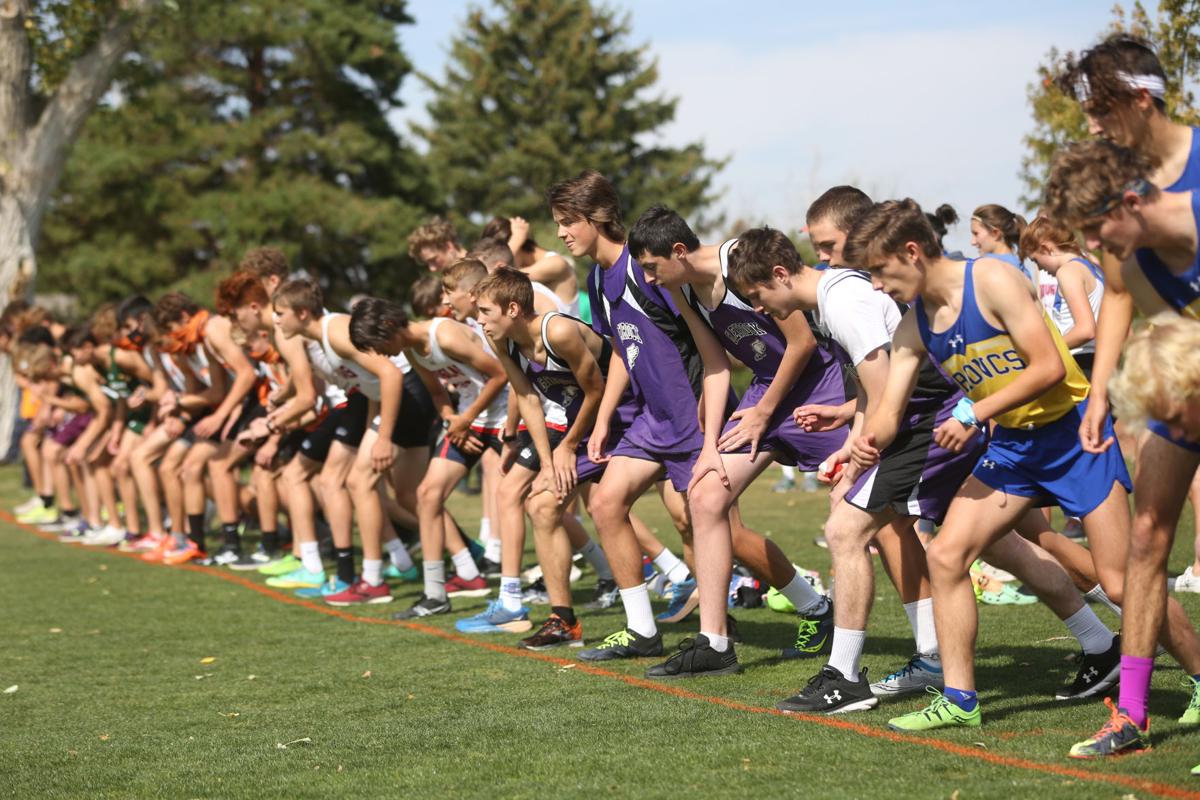 The Glenrock varsity cross country team (in purple) and the rest of the competing teams get ready for the start of the Glen Legler Memorial Invite on Sept. 24 at Paradise Valley Country Club in Casper. 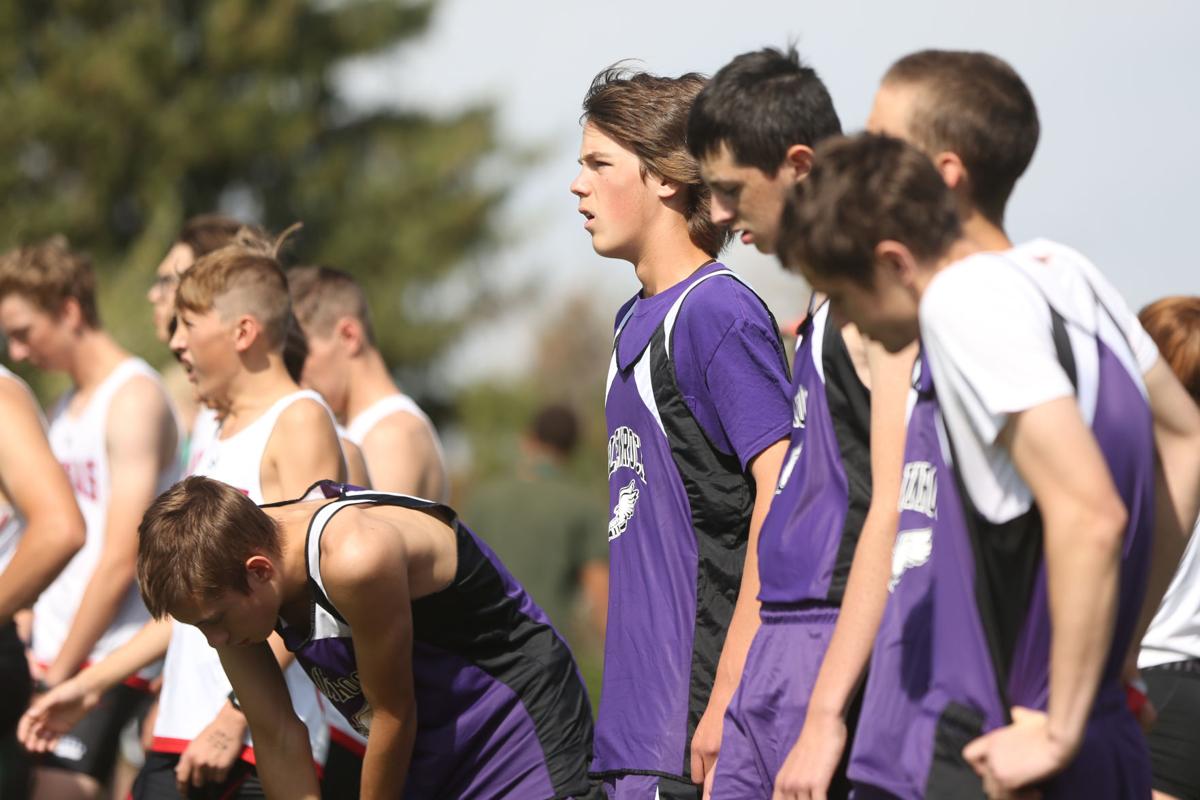 John Halvorsen stands with his fellow Glenrock runners at the starting line before the Glen Legler Memorial Invite on Sept. 24 at Paradise Valley Country Club in Casper.

John and James Halvorsen come from a football family. The twins, who are juniors at Glenrock High School, have four older brothers and two older sisters. Their brothers all played football for the Herders and their dad, Kevin Halvorsen, was an assistant football coach at Glenrock.

John and James chose a different path, however. Both run cross country for the Herders.

Neither John nor James were long-distance runners while growing up outside of Glenrock, but when given the opportunity to run cross country three years ago, they seized it.

“In eighth grade, we had a choice of either going to Casper and doing a class with some other kids or running cross country,” James explained. “We chose to run cross country and we rather liked it.

“I ran track in seventh grade so I figured I would run cross country because it’s not as boring.”

“We had them in middle school, too, and they were really good runners then,” said Glenrock cross country coach Chris Gray. “They are self-made runners. They got interested in running and took it upon themselves to get better.

“The biggest difference I’ve seen this year is they’ve gotten bigger and stronger and more dedicated. This summer they went above and beyond with the things we asked them to do.”

John and James spent the past two years running together, both in practice and at meets.

“We push each other quite a bit in practice,” James admitted. “Sometimes he’ll slow down so we can run together. And then there are days where I decide to run fast, and of course then he’ll take off. But that just makes him go a whole lot harder.”

“He’s the only one who can push me in practice,” John said. “Sometimes he scares me.”

Gray knows the competition between the two benefits not only John and James, but the rest of the team as well.

After last year’s state meet, John wasn’t satisfied. His 14th-place finish might have been the best showing for a Herder in years, but he wanted more. He was expecting a top-10 finish.

“I really was betting on the fact that I could be all-state,” he said. “But then I realized that I wasn’t ready and I needed to push myself.

John’s desire to push himself has paid off through the first month of the season.

He won the Newcastle Invite back on Aug. 28. One week later he finished sixth – behind five Class 4A runners – at the Douglas River Run. At last week’s Glen Legler Memorial Invite he had another top-10 finish.

“I basically started running right after state,” John said. “And after track got canceled (in the spring) me and James looked up some training routines on the Internet and started doing those. And at home I would do squats and other exercises.”

While John continues to push himself to be faster and stronger, James has a different mindset when he runs.

“It would be nice to take top 10 in state, but that’s not my mentality,” he admitted. “I run for the glory of God and run as fast as I am able to.

“I used to be ahead of him,” James added, motioning to John, “but he started doing some home exercises and that’s created some distance between us.”

When John began his new training regimen, James was often in the same room. But that didn’t last long.

“He gets mad at me if I stand there and watch him,” James said, “so I just go and take my shower first.”

Glenrock is a sports town.

The majority of the Herders’ success, however, has either been on the football field or the wrestling mat. Glenrock has won eight state championships in football, with the most recent coming in 2008. The wrestling team had back-to-back runner-up finishes at state in 2017-18 and placed third in 2019. Even the boys’ basketball team was the state runner-up in 2014.

Meanwhile, the cross country program has been running behind. Since winning the Class 3A state title in 2005, the Herders didn’t finish higher than seventh before the 2018 squad, led by John and James, placed sixth. Last year Glenrock climbed one spot to fifth.

It’s been a slow process, but Gray continues to see progress in his young team. In addition to John and James, the top five runners for the boys’ team at last week’s meet were junior Paxton Piasecki and sophomores Cody Piasecki and Hunter McCullough.

“It’s been a blast to watch all of these kids progress,” said Gray, who previously was an assistant football coach and also coached the girls’ basketball team in Glenrock. “This is a great sport and our fans are starting to figure it out. They see the kids running around town all the time and I think they’re starting to catch on.

“People who had no idea what cross country was about say this this looks like a lot of fun.”

Fun and cross country aren’t usually mentioned in the same sentence. Yet Gray admitted that he and assistant coach Misty Allen, whom Gray said “is full of energy,” are indeed enjoying their time training with the Herders.

Having runners like John and James obviously helps, even though it took them awhile to reach that stage.

“I thought James was crazy because he was running a mile (in middle school),” John laughed. “Now I’m running three miles. And I didn’t have any idea that I would be good at distance running.”

John and James might not have followed in their brothers’ footsteps and played football for Glenrock, instead choosing to carve out their own path on the cross country course. And that’s just fine with their dad.

“I’m very impressed and very proud of how they’ve taken this on,” Kevin said. “They’ve taken the bull by the horns, so to speak, and have trained to be the best that they can be.”

BREAKING TRADITION: Glenrock junior twins John and James Halvorsen come from a football family, but chose to run cross country for the Herders.

SETTING THE PACE: Both have finished in the top 15 at the Class 2A state meet the past two years. It's the highest finish for a Glenrock boys runner since 2011.

HE SAID IT: “A lot of people think we’re crazy.” -- John Halvorsen.

Glenrock's John Halvorsen pushes through the last leg of a race toward the finish line during the Glen Legler Memorial Invite on Sept. 24 at Paradise Valley Country Club in Casper.

Glenrock's James Halvorsen runs up a hill during the Glen Legler Memorial Invite on Sept. 24 at Paradise Valley Country Club in Casper.

The Glenrock varsity cross country team (in purple) and the rest of the competing teams get ready for the start of the Glen Legler Memorial Invite on Sept. 24 at Paradise Valley Country Club in Casper.

John Halvorsen stands with his fellow Glenrock runners at the starting line before the Glen Legler Memorial Invite on Sept. 24 at Paradise Valley Country Club in Casper.