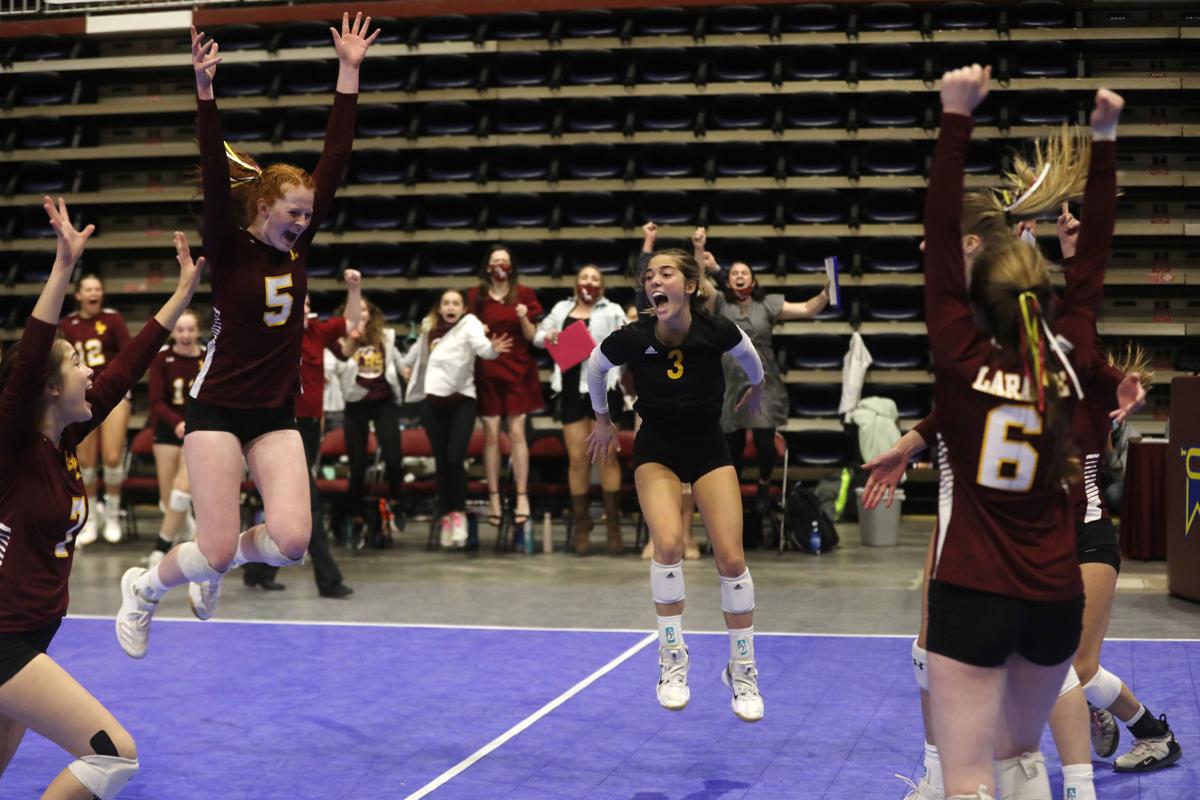 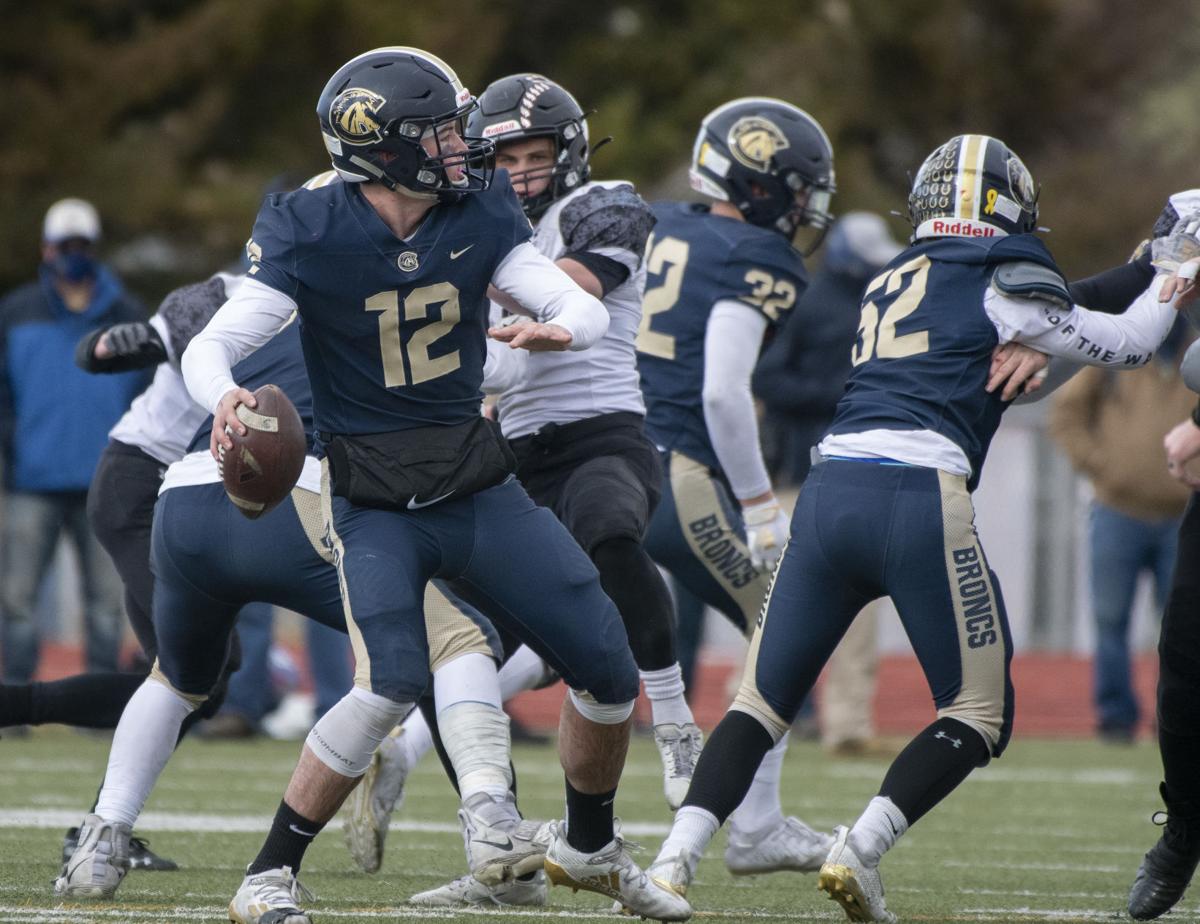 Cody quarterback Caleb Pryor looks to throw downfield in the Broncs' victory over Jackson in the 2020 Wyoming State High School Class 3A Championship game on Nov. 14 in Cody. Pryor was one of nine Cody players named to the Class 3A all-state team on Sunday. 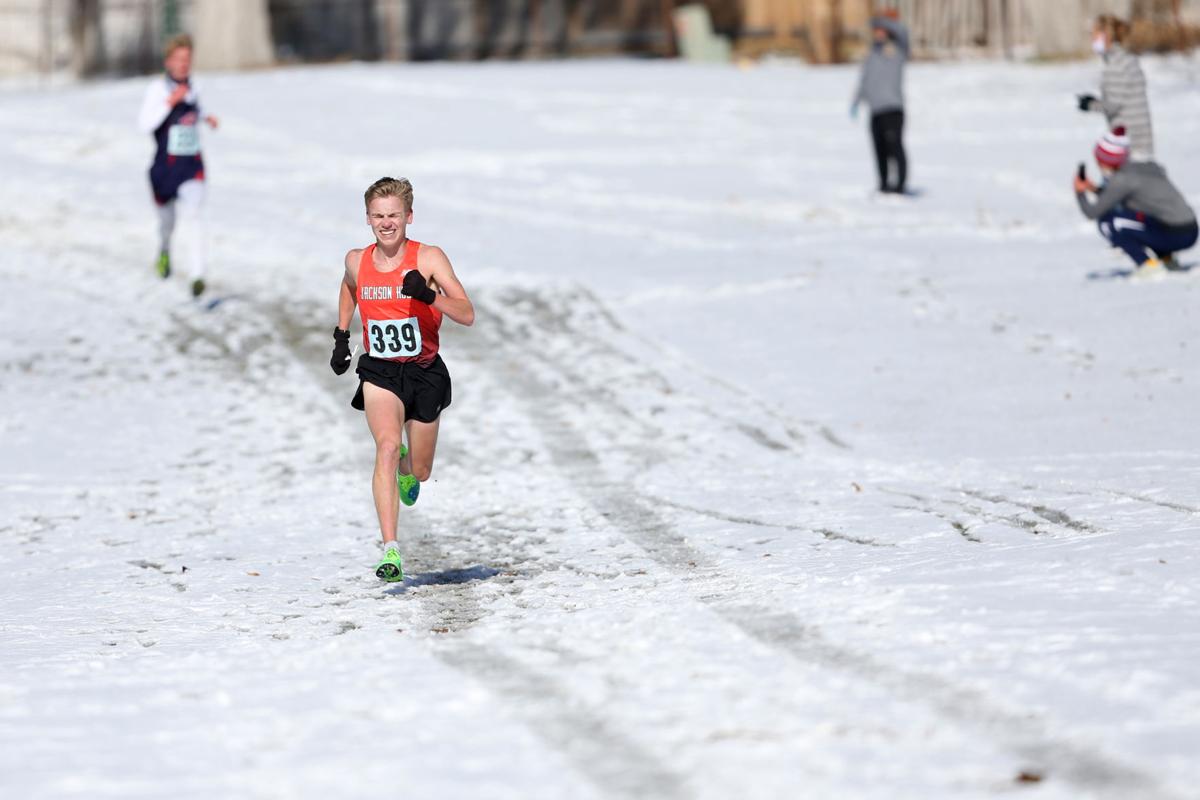 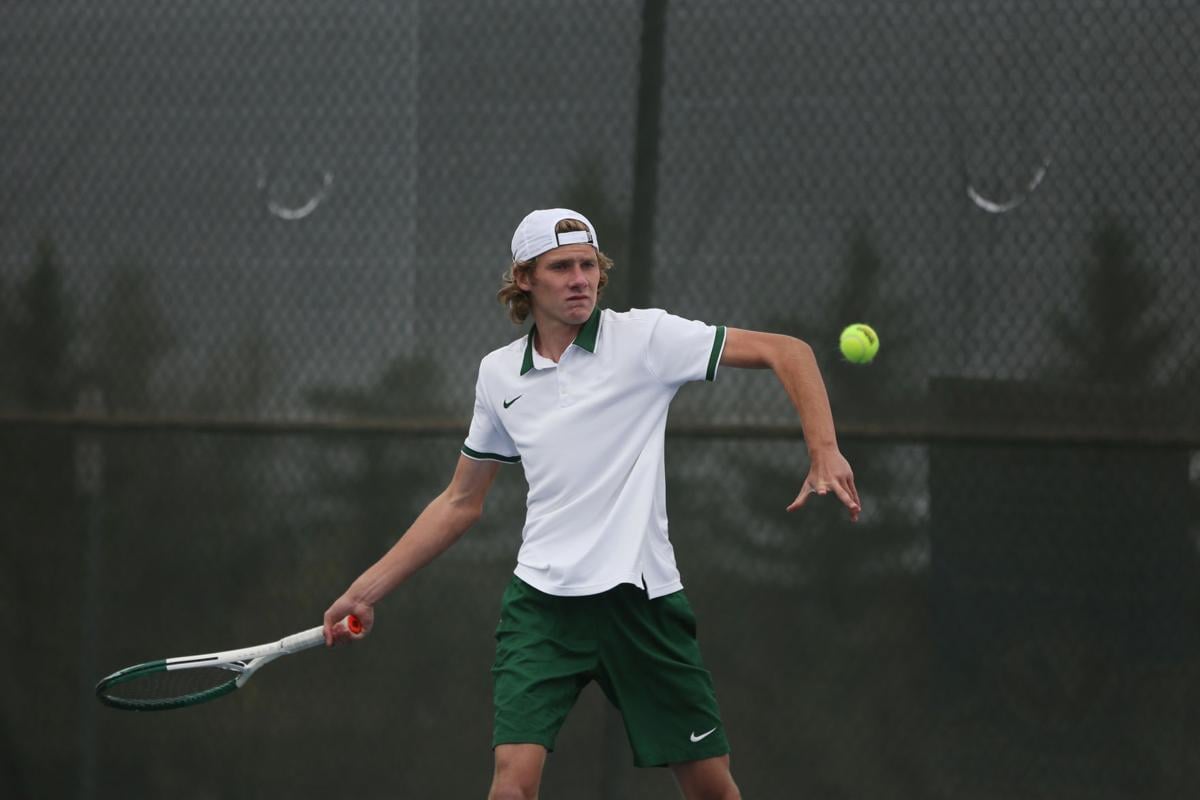 Kelly Walh's Austin Putnam prepares to return a shot to Gillette's Tanner Lemm during their singles match Sept. 10 at the Casper Country Club.

Football players spent 40 minutes every Friday or Saturday throwing themselves at opponents, their bodies used like battering rams as they attempted to block or tackle opposing players. When the final horn sounded, the teams usually faced each other and raised their helmets in a show of sportsmanship.

Volleyball players dove for digs, jumped for kills and blocks, never changing courts throughout a match, which ended with waves rather than the typical hand-shake line.

When they weren’t competing, athletes stood or sat on the sidelines often wearing face coverings. Golfers, cross country runners, tennis players and girls swimmers and divers didn’t wear masks when competing for obvious reasons, but the new fashion statements for the 2020 fall prep sports season was always present. Monday the Wyoming High School Activities Association issued a mask mandate — for student-athletes, coaches, officials and fans — for the upcoming winter sports season amid the ongoing surge of the coronavirus pandemic.

WHSAA institutes mask mandate for all winter sports in Wyoming

Consider it part of the “new normal” as the WHSAA and schools attempt to do what they can to hold more state-culminating events after the new year. Whether or not that happens remains to be seen, but what can’t be ignored is that there were six state-culminating events held this fall. And, given the way COVID-19 cases and deaths are continuing in an upward trend, now seems like as good a time as any to look back at the 2020 fall prep sports season.

The season began back in mid-August and culminated with the state meets Sept. 19-20.

The Thunder Basin (4A) and Sundance (2A) girls won back-to-back titles while on the boys side Sheridan (4A) grabbed team gold for the first time since 2011 and Worland (3A) ended an 18-year title-less streak.

The Kelly Walsh boys won the team title for the first time in 26 years with juniors Austin Putnam and Jackson Catchpole both went 20-0 in singles play. Putnam swept his way to the No. 1 title while Catchpole did the same in the No. 2 division.

The girls’ team race came down to the final match, and for the fourth year in a row Cheyenne Central stood atop the podium after senior Emily Needham defeated Kelly Walsh junior Finley Klinger in three sets to win No. 1 singles. It was the third consecutive state title for Needham, who won No. 1 singles last year and No. 2 singles in 2018.

Rawlins senior Sydney Thorvaldson captured her fourth consecutive Class 3A title, breaking her own state record at the Afton Valley View Golf Course with a time of 16 minutes, 59.6 seconds. The Arkansas commit never lost an in-state race during her four-year career.

While Thorvaldson grabbed the majority of the headlines, Star Valley senior Peter Visser raced to his third 3A title and Saratoga sophomore Grant Bartlett won his second in a row.

The Cody girls in 3A and the Saratoga boys, who tied Tongue River for the 2A team title, were the only repeat champs. Lander, which placed four runners in the top 8, ran away with the 3A boys title for the first time in 13 years. And the Tongue River boys and girls each won their first team titles.

Laramie won the 4A team title for the fourth year in a row while Green River won the 3A crown to end Lander’s four-year reign atop the classification.

The usual three-day event was expanded to four days with each classification having the Casper Events Center to itself for one day.

Playing three matches in one day didn’t prove to be a problem for state champs Cokeville (1A), Sundance (2A), Mountain View (3A) or Laramie (4A). The 1A Panthers claimed their fourth consecutive state championship and 25th overall while the 2A Bulldogs repeated as champs and won for the third time in four years.

For the first time since 2009, teams didn’t have their sights set on ending the season at the University of Wyoming’s War Memorial Stadium. Instead, each of the state’s five classifications state championship games were held at host sites, and four of the host teams emerged as champs.

Cheyenne East ended a seven-year drought with a come-from-behind 29-15 victory over Thunder Basin to win the 4A crown. Cody routed Jackson 34-13 for the 3A title. Visiting Lyman scored two fourth-quarter touchdowns to win 14-3 at Torrington in 2A. Southeast completed a perfect season with a 47-28 victory over Lusk to win the 1A/9-man title. And Farson defeated Meeteetse 42-30 in 1A/6-man to finish unbeaten for the second time in three years.

Cody quarterback Caleb Pryor looks to throw downfield in the Broncs' victory over Jackson in the 2020 Wyoming State High School Class 3A Championship game on Nov. 14 in Cody. Pryor was one of nine Cody players named to the Class 3A all-state team on Sunday.

Kelly Walh's Austin Putnam prepares to return a shot to Gillette's Tanner Lemm during their singles match Sept. 10 at the Casper Country Club.