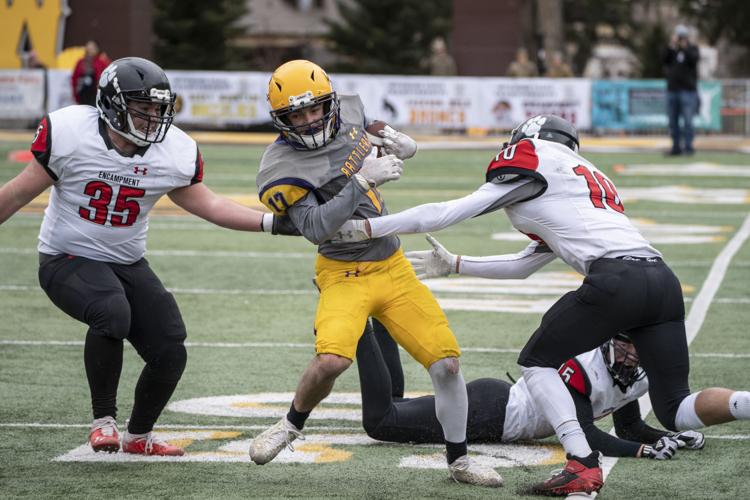 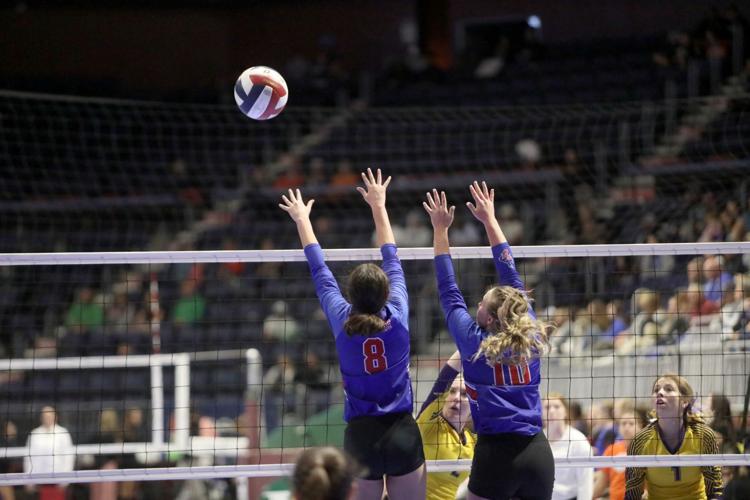 Kaycee's Arlette Ortega-Chavez, left, and Sierra Kilts block a Snake River shot during their quarterfinal match of the Wyoming State High School Class 1A Volleyball Championships on Nov. 4, 2021 at the Ford Wyoming Center in Casper. 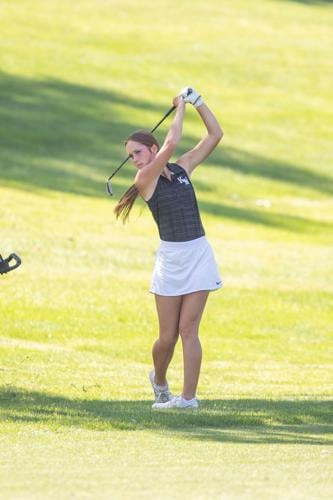 Kelly Walsh junior Haily Kalus hits from the fairway during the Casper Invite on Aug. 23, 2021 at the Paradise Valley Golf Course. 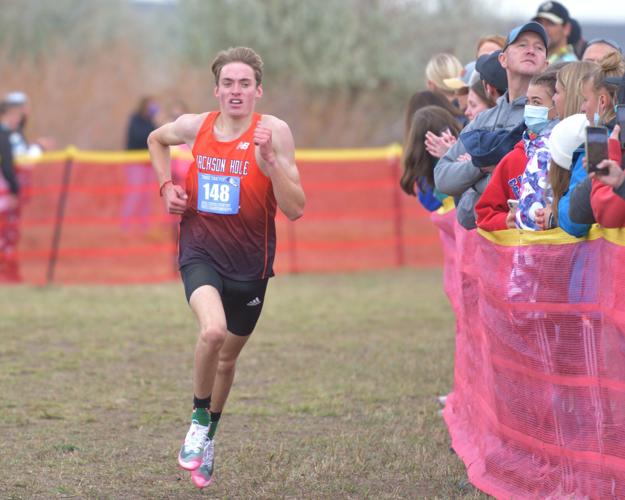 Jackson's Mason Wheeler heads toward the finish line on his way to winning the Wyoming State High School Class 4A Boys Cross Country Championship on Oct. 23, 2021 at Ethete. 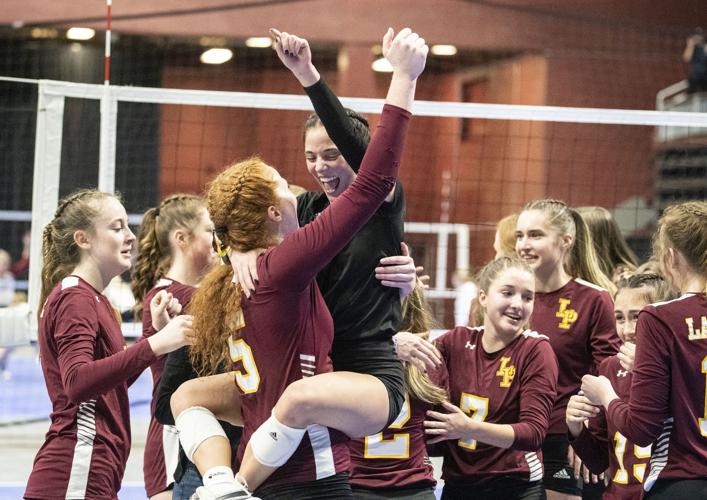 A high school sports season that began last August came to an end May 21 with state championships in track & field, soccer and softball. Over the next three days, the Star-Tribune will look back at the 2021-22 prep season, beginning with the six fall sports.

After the 2020 state championship games were played at host sites because of the coronavirus pandemic, the games returned to the University of Wyoming’s War Memorial Stadium in November.

Sheridan (11-1) outscored Rock Springs 17-0 in the second quarter and rolled to a 45-27 victory in the Class 4A title game. Senior Carter McComb returned the opening kickoff 86 yards for a touchdown and junior Colson Coon rushed for 230 yards and four TDs to lead the Broncs to their fifth tile in seven years and 28th overall.

Cody (11-0) won its second consecutive 3A title and capped the first undefeated season in program history with a 41-24 victory against Jackson. Cody trailed 10-7 late in the first half, but scored 34 consecutive points to put the game out of reach. Matt Nelson returned two interceptions for touchdowns and Remy Broussard also had a pick-six for the Broncs.

In 2A, Lyman (12-0) held on for an 8-6 defensive victory over Lovell. The Eagles held the Bulldogs to six first downs and 121 total yards to defend their crown and win their 19th consecutive game.

Shoshoni (10-1) won its first state championship since 1985 with a 19-6 victory against Rocky Mountain in the 1A/9-man title game. Junior quarterback Max Mills threw three TD passes to junior receiver Trey Fike to give the Wranglers their first title in 36 years.

The 1A/6-man title went to Snake River (10-0), which defeated Encampment 65-24 in the championship game to cap its second undefeated season in three years. Hadley Myers (159) and Kanna Peroulis (115) combined for 274 rushing yards and rushed for three touchdowns apiece to lead the Rattlers.

Thermopolis won its fourth consecutive Class 2A team title, with Hardy Johnson winning individual medalist honors for the fourth year in a row.

In 3A, Riverton claimed its first title since 2016 behind individual medalist Parker Paxton. It was the second title in a row for the sophomore.

In 4A, Jackson grabbed its first team title since 2012, with Sheridan’s Brock Owings winning medalist honors.

Sheridan (4A), Wheatland (3A) and Upton (2A) won team titles. It was the first for the Broncs since 2015 while the Bulldogs and Bobcats won for the first time.

Individual winners were Kelly Walsh’s Haily Kalus (4A), Lovell’s Erika Cook (3A) and Upton’s Brooklyn Materi (2A). Both Cook and Materi defended their 2020 titles.

Kelly Walsh doubled its pleasure, with the boys team netting its second consecutive title and the girls team winning for the first time in 14 years. Both Trojans teams were undefeated during the season, with that dominance carrying over to the state meet in Gillette.

Finley Klinger (No. 1) and Gabriella Blumberg (No. 2) both won singles titles for the KW girls, who also won all three doubles championship matches.

Individual champs for the boys were Jackson’s Campbell Gervais (No. 1 singles) and KW’s Jackson Catchpole (No. 2 singles).

Team titles went to Cheyenne Central (4A), Mountain View (3A) and Rocky Mountain (2A). The championship was Central’s first since 2007, with the Buffalos and the Grizzlies winning for the first time.

The Plainsmen had three individual winners — Anna Roesler in the 200 free, Mallorie Hamel in diving and Ashlyn Mathes in the 500 free — and won the 400 free relay to win the 4A title for the fifth year in a row.

Gillette senior Berkeley Christensen put the finishing touches on her outstanding prep career by capturing gold in the 100 fly for the third time and in the 200 IM.

Cheyenne Central senior Kira Brownell also won two events as she touched the wall first in both the 50 free and 100 back. Gillette junior Skye Rehard defended her title in the 100 breast.

In 3A, defending champ Green River and Lander tied for team honors. The Wolves got individual gold from Tanith Smith (50 free, 100 back), Lilly Munoz (100 breast) and Courtney Clark (500 free) and won the 200 medley and 400 free relays. Lander countered with an individual title from Ashlon Koch in the 100 fly, the 200 free relay championship and outstanding depth.

Cody junior Tara Joyce defended her title in the 200 free and also set a state record in the 100 free with a time of 51.49 seconds. Buffalo senior Makenna Lambert captured her third consecutive title in the 200 IM.

Laramie defended its 4A title behind senior Alexis Stucky, the state’s two-time Gatorade Player of the Year. Stucky finished with 22 kills in the Plainsmen’s state championship match victory against Kelly Walsh.

Kaycee's Arlette Ortega-Chavez, left, and Sierra Kilts block a Snake River shot during their quarterfinal match of the Wyoming State High School Class 1A Volleyball Championships on Nov. 4, 2021 at the Ford Wyoming Center in Casper.

Kelly Walsh junior Haily Kalus hits from the fairway during the Casper Invite on Aug. 23, 2021 at the Paradise Valley Golf Course.

Jackson's Mason Wheeler heads toward the finish line on his way to winning the Wyoming State High School Class 4A Boys Cross Country Championship on Oct. 23, 2021 at Ethete.