Officials are working to bring back high school sports. But obstacles and uncertainty remain.
View Comments
Share this
Return to homepage × 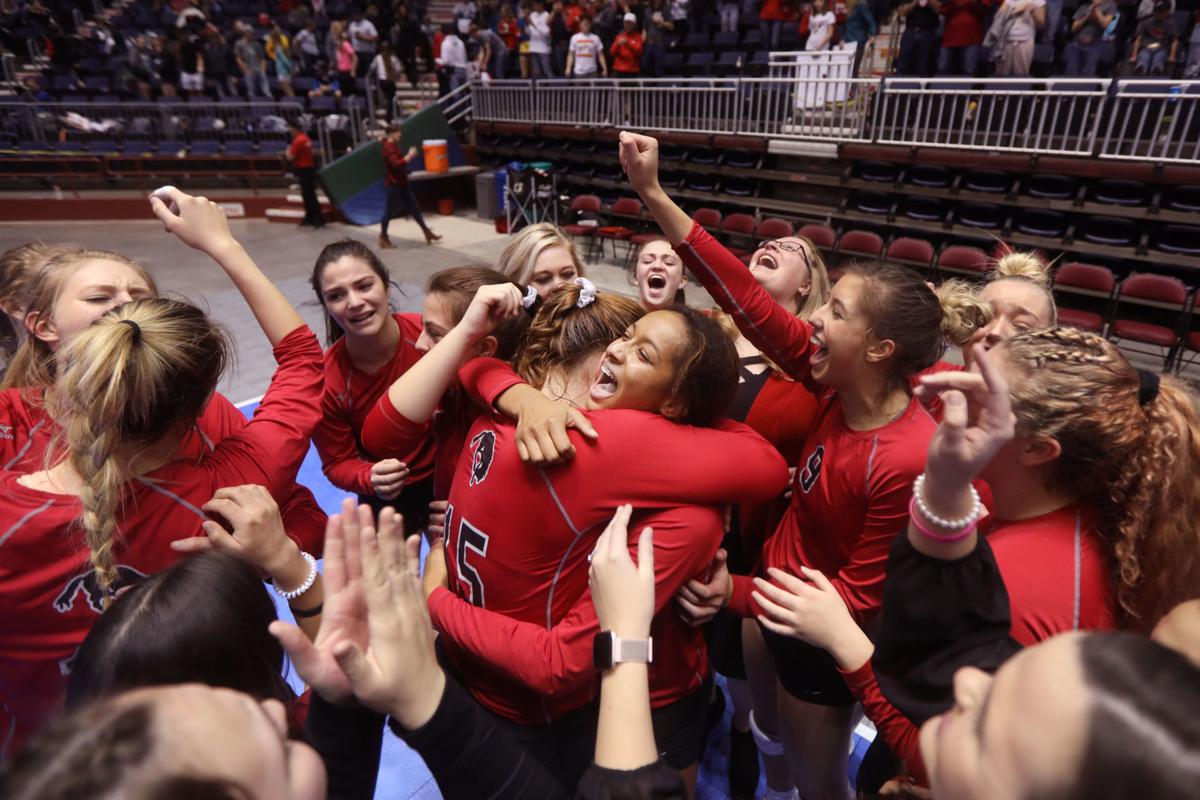 Rawlins players and coaches cheer after the Outlaws defeated Worland to win the Wyoming State High School Class 3A State Volleyball Championship on Nov. 9, 2019 at the Casper Events Center. 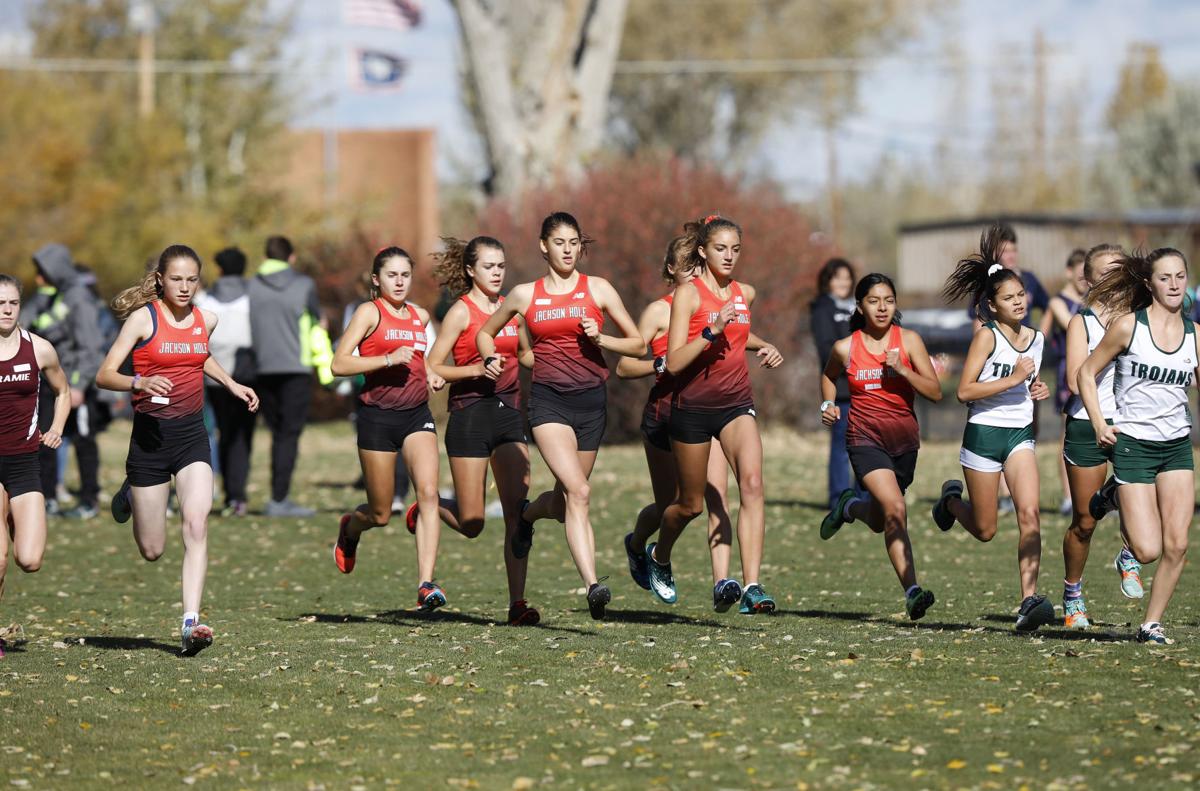 The Jackson girls team takes off from the starting line during the Class 4A West Regional Cross Country meet on Oct. 18, 2019 at Paradise Valley Country Club in Casper.

The 2020 Wyoming high school fall sports season is scheduled to begin next month with golf tournaments and tennis matches set for mid-August. Before August is over, the rest of the fall sports – football, volleyball, girls swimming and cross country – will all have held their first contests.

At least that’s the plan.

Whether or not those games or events will take place, though, remains in question as the coronavirus pandemic continues to wreak havoc on the sports landscape. The Big Ten and the Pac-12, two Power Five conferences, announced this week that their football teams would only play conference games. And the Ivy League has decided to cancel all fall sports. While it remains to be seen if other conferences implement similar plans, COVID-19 and its effects are being closely monitored by the Wyoming High School Activities Association.

“Right now the hardest part of all this is the unknown,” WHSAA commissioner Ron Laird said in a recent interview. “Everybody is still learning as we’re going. We’re trying to be as optimistic as we can and as prepared as we can as we approach the fall.”

The WHSAA and its board of directors are trying to be as proactive as possible in preparing for the upcoming fall seasons. They have been in constant contact with state and county health officials as well as school administrators as they put together a plan to ensure that all six sports take place this fall.

The state’s last sanctioned high school sports contest was back on March 11, the opening day of the Class 3A/4A state basketball championships. After just two games the tournament was first postponed and then canceled because of the pandemic. Then, on April 7, the decision was made to cancel all spring sports.

Looking back, Laird has no doubt officials made the right call to cancel the state basketball tournament, although he does have one regret.

“I wish we could have known before we started playing because it would have been so much easier on everybody involved,” he offered.

Calling off the spring sports seasons for track and soccer wasn’t an easy decision, but again it proved to be the right one.

“The decision to cancel spring sports was tough because we looked at so many options,” Laird said. “We might have been able to have state track, but it would have had to be at four different sites. And we still may have to do that for cross country or even volleyball.”

That’s what makes trying to figure things out for the fall sports seasons so difficult. Each sport is unique so there are different factors to consider for each one. And, as Laird continually pointed out, “this is uncharted territory for all of us.”

But while each sport has its own variables to consider when implementing schedules and multi-team invitationals, there will be protocols in place to help ensure the safety of all participants.

“The health department is still going to require at least temperature testing for all sports that the schools will have to have in place,” Laird said. “Coaches are going to test those kids before they practice every night. They’re not running actual COVID tests, but they’re going to be monitoring students’ health and they’re going to have a guideline they have to follow, and kids are going to have to answer questions each day about their health.

“That’s going to be a challenge because that’s where we’re going to have to rely on the kids and their parents to be honest with us,” he added. “I know it’s going to be tough, but this isn’t the time to be selfish. If you’re sick, you’re sick. We’re also going to strongly recommend that officials wear face masks during contests, especially in football and volleyball.”

“People have to understand that we don’t have the resources to do all of the testing. So all of our schools are going to have protocols in place.

“One of the main concerns is if someone does test positive health officials want to be able to track it. They haven’t finalized it yet, but there would definitely be a quarantine period for that kid. What we don’t know is if it would be just for the kid or for the whole team. The team wouldn’t forfeit anything, those would just be games that wouldn’t count. Any game the team was supposed to play in that two-week period would just go down as a no-contest.”

Put simply, Laird wants people to know the WHSAA is going to do whatever it can to ensure student-athletes have a fall sports season.

“We have to keep the big picture in mind,” he stated. “We want the kids and the parents to know that we’re doing these things so that kids are getting to participate. We have to keep that perspective.”

As important as it is to start the fall season, Laird also wants to make sure each sport finishes with a state tournament.

In order for that to happen, the WHSAA has implemented certain protocols and has considered various options for each sport. During the interview, Laird discussed some of those issues regarding each sport.

While acknowledging that kids will likely be “chomping at the bit” to play organized sports again, Laird also knows concerns over COVID-19 could lead to a decrease in participation.

“I think that sub-varsity football is going to be scaled back a little bit,” he admitted. “I don’t know how many kids might not come out for sports because of this.

“And if you’re seeing NFL players saying that they’re not going to play there’s a good chance we’re going to see some parents telling their kids they aren’t going to play, especially if it’s a contact sport. We’ll see how that plays out.”

At this point, one of the main concerns with volleyball involves invitationals that bring together a number of teams as well as their accompanying fans.

“We’ll be looking at those large invites and trying to split them up so we can get the numbers down to help with social distancing,” Laird offered. “I think we’ll be able to play volleyball, I just don’t know how many fans we’re going to be able to let in.”

One option being discussed is to have multi-team invitationals be held at multiple sites, although there is a concern about which teams would then play at which site.

Other changes would likely have to be implemented for the state tournament, which is scheduled for Nov. 5-7 at the Casper Events Center.

According to Laird, the tourney’s recent format of having all four classifications play at the same time on adjoining courts might have to be adjusted. There is also talk of having each class playing its state tournament at a different site.

The three outdoor sports are expected to present the fewest problems.

“I think those are set up for social distancing for the most part and we’ll be easier to monitor,” Laird said. “So I can see those going off fairly easily, even though they won’t look the same as they have in the past.

“In cross country we’re hoping to have wider starting areas and longer finish areas. When the race is over we want coaches to gather their team and take them away from the crowd.”

With swimming being an individual sport, Laird believes the WHSAA has “more flexibility” on how it can pull it off. Obviously, though, multi-team meets raise the same concerns as those for volleyball. He also knows that because it’s an inside sport, “spectators might be a challenge.”

With just one month until the fall season is supposed to begin competing, Laird remains optimistic there will be high school sports across the state.

“I appreciate the way that everybody is approaching it and trying to stay positive,” he said. “We just need to keep that focus so that these kids can play.”

Previously an assistant girls basketball coach at Green River, Cantrell steps into his new position at a trying time.

Wyoming fall prep sports season gets the go-ahead, with some major changes

The WHSAA released a statement Tuesday that the seasons for all six sports will begin as scheduled next month.

Rawlins players and coaches cheer after the Outlaws defeated Worland to win the Wyoming State High School Class 3A State Volleyball Championship on Nov. 9, 2019 at the Casper Events Center.

The Jackson girls team takes off from the starting line during the Class 4A West Regional Cross Country meet on Oct. 18, 2019 at Paradise Valley Country Club in Casper.