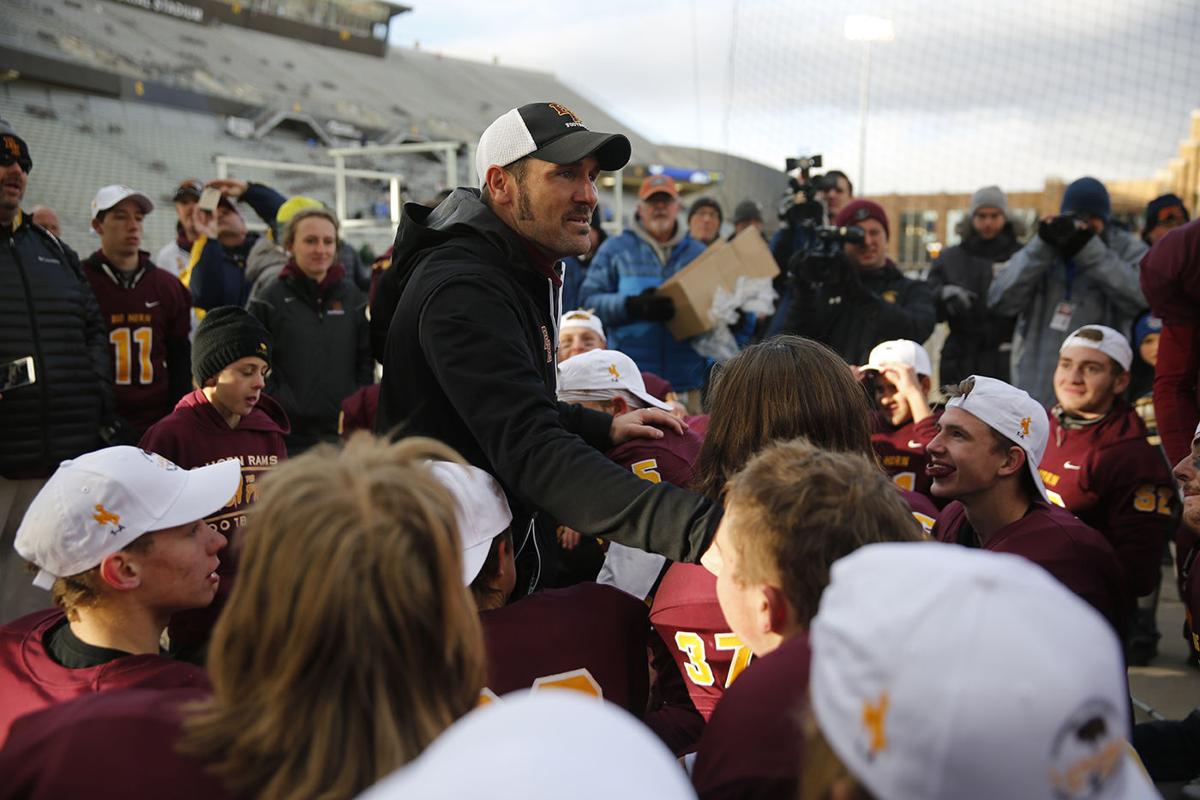 Big Horn head coach Kirk McLaughlin talks to his team after the Rams' win over Cokeville in the Wyoming State High School Class 1A/11-man Championship game in 2018 at War Memorial Stadium in Laramie. 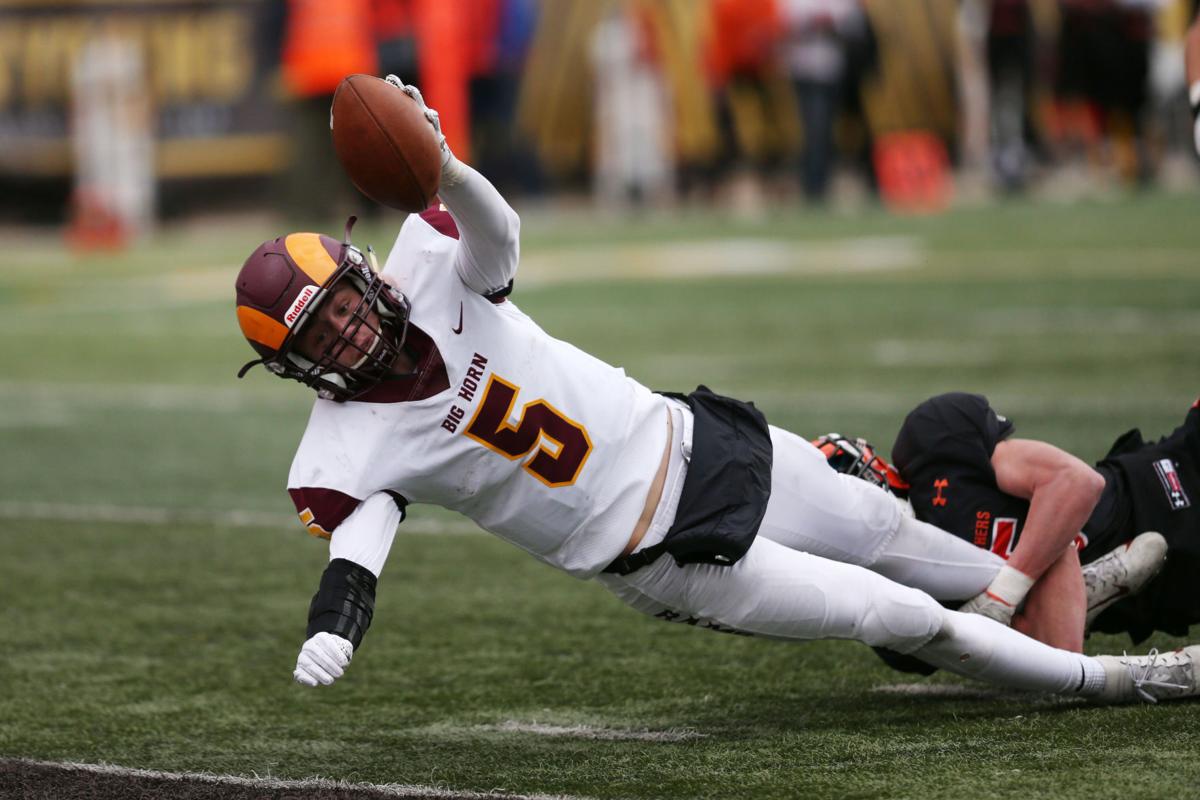 Big Horn's Will Pelissier stretches across the goal line for a touchdown as he is tackled by Cokeville's Treyson Dayton during the Wyoming State High School Class 1A/11-man Championship game on Nov. 16, 2019 at War Memorial Stadium in Laramie. 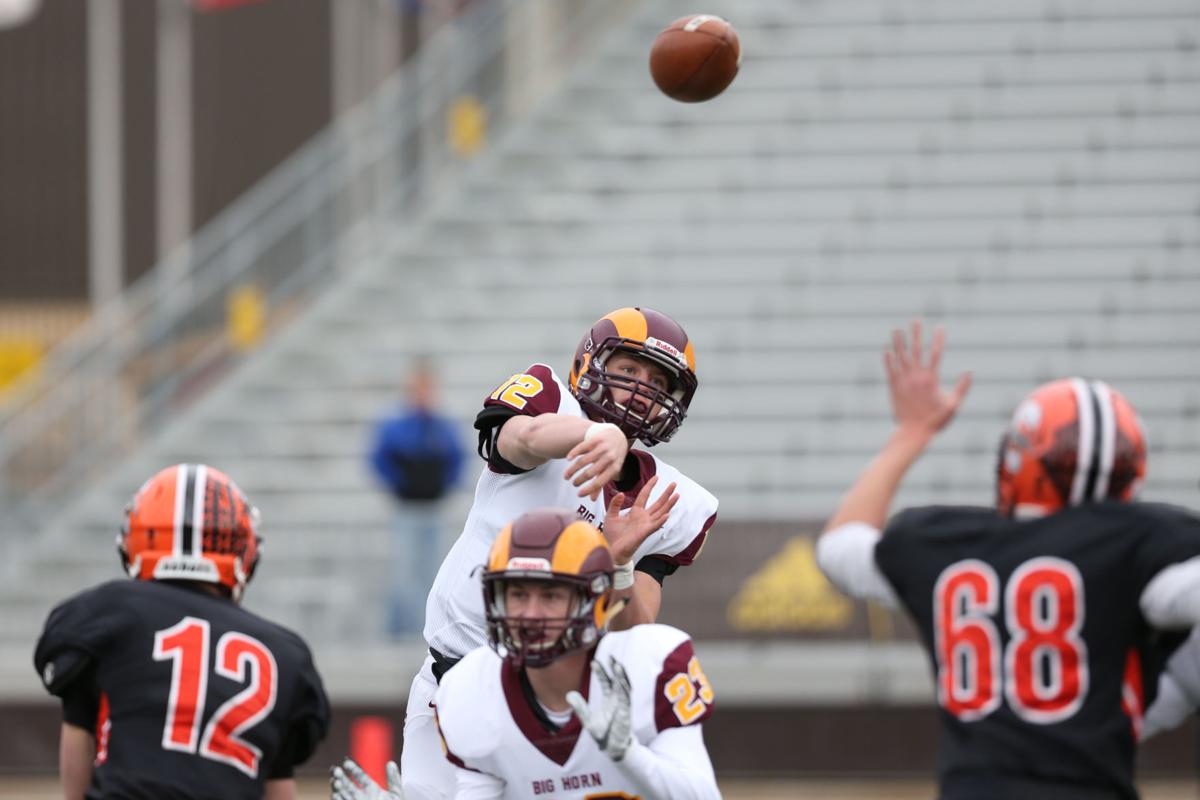 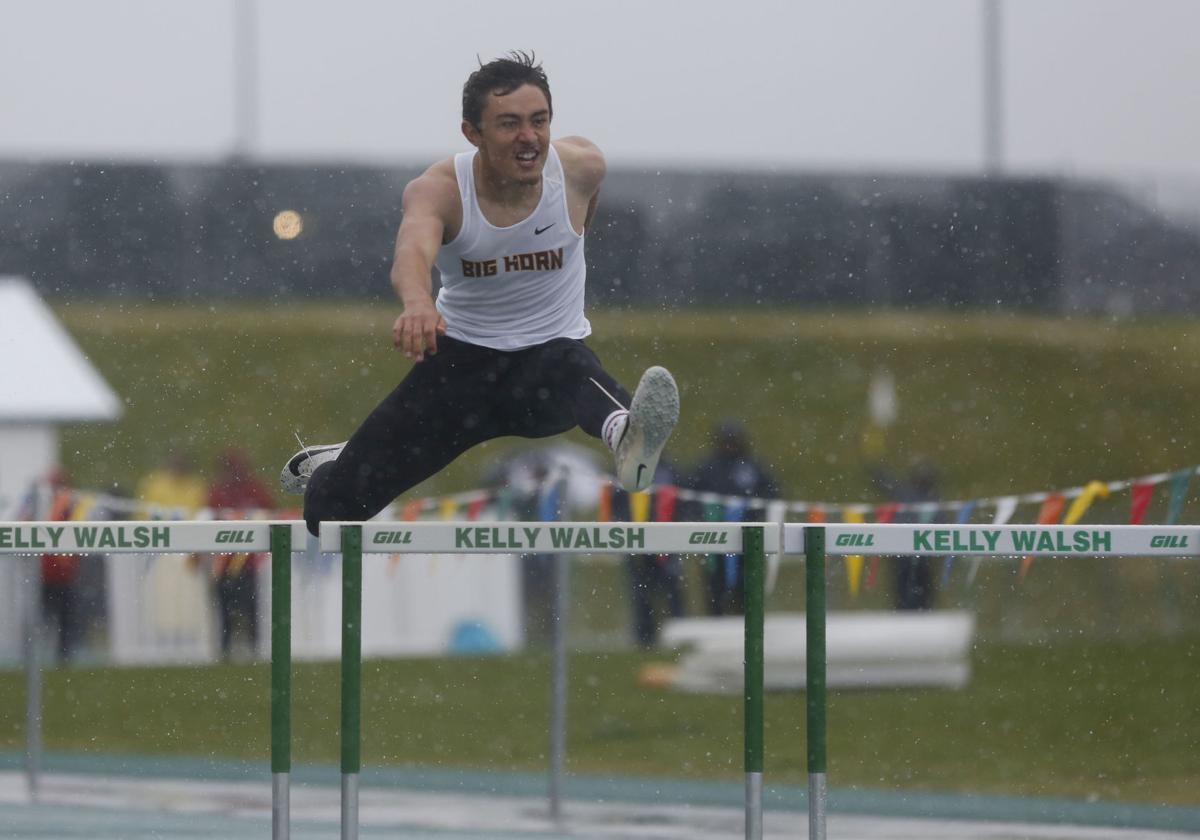 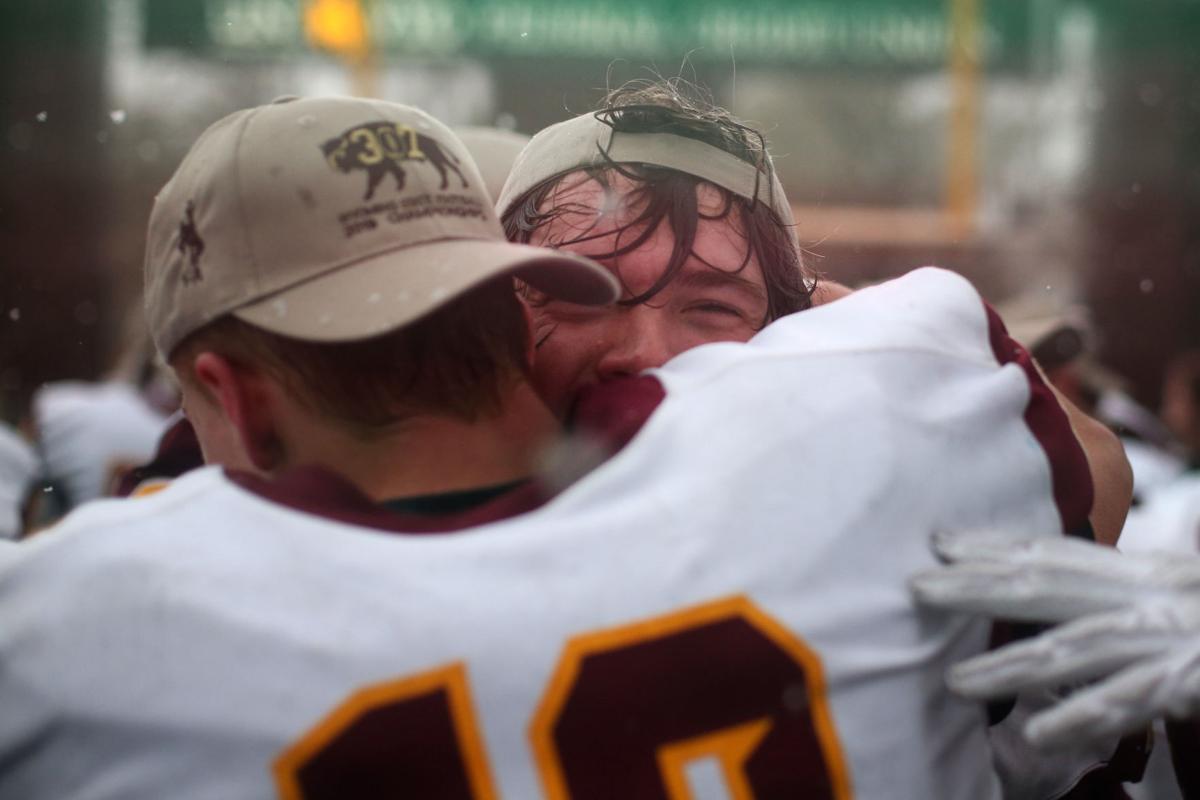 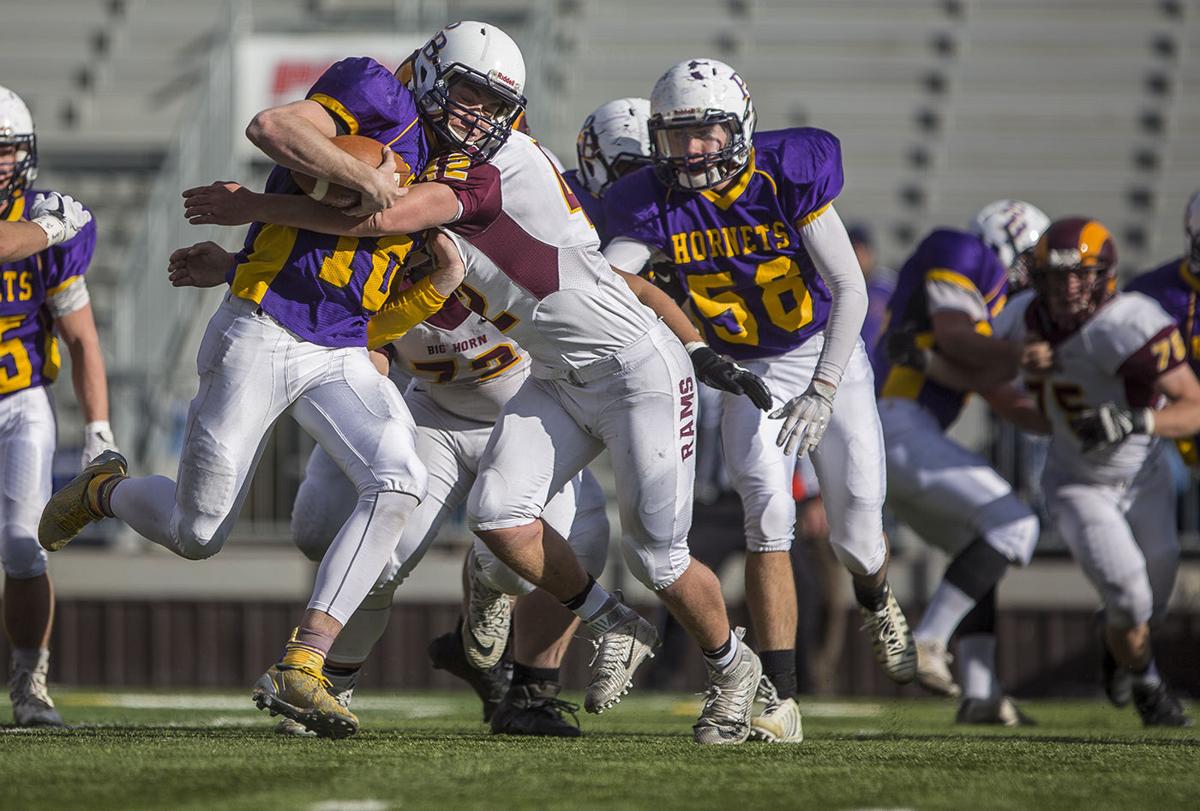 Monday at 12:01 a.m. the Big Horn football team will take the field for their first official practice of the 2020 season.

Less than 48 hours before they would play their final high school football game together, the Big Horn seniors gathered at the middle of Big Horn Field. Their final practice as Rams was over. Coaches and the non-seniors had picked up the footballs and equipment and gone to the locker room.

The six seniors – Quinn McCafferty, Kyler Ostler, Cutler Bradshaw, Nolan Rader, Will Pelissier and William Watson – shared stories. They reflected on games and certain plays. Mostly, they just enjoyed each other’s company for one last time away from the coaches and the rest of the team.

“It was getting dark,” Ostler recalled, “but we all sat down and leaned against our helmets and just reflected about games we had played and our memories.”

At that point — Nov. 14, 2019 — Big Horn had won 21 consecutive games. Their final game as Rams would be against a familiar foe in Cokeville, which they had defeated the year before to win the Wyoming State High School Class 1A/11-man championship. The 2019 title game was scheduled for Nov. 16 at the University of Wyoming’s War Memorial Stadium. But the coaches had been preparing the Rams for the Panthers all week and would go over the game plan with them again before the 1 p.m. kickoff.

So that night, basking in the stadium lights with a mid-November chill in the air, belonged to the seniors.

“That was a really awesome experience and one I’ll never forget,” Pelissier said. “We just sat out there in a circle in the middle of the field and talked about our experiences throughout the years and how much fun we had had.

“It was great because usually during state championship week you’re nervous and all you can think about is the game, but that night we were just able to live in the moment with no nerves whatsoever.”

The first quarter of the 2019 championship game ended in a scoreless tie. Big Horn then scored three touchdowns in a little more than 8 minutes to take a 21-0 lead into halftime. The Rams extended the margin to 34-7 after three quarters and added three more scores in the fourth quarter to win 55-7.

It was the Rams’ second consecutive state title – they defeated Cokeville 56-3 in the 2018 championship game – and their 22nd win in a row. Pelissier scored three touchdowns and finished with 289 all-purpose yards; Ostler caught three passes for 84 yards, including a 15-yard scoring toss from McCafferty, who completed 9 of 10 passes for 180 yards and two TDs; Bradshaw and Rader combined for 18 tackles and anchored an offensive line that piled up 549 yards of total offense.

It was a dominating performance by a dominating team. Big Horn outscored its opponents by an average margin of 41.6 points over the last two years. In six playoff games, the Rams totaled 376 points while allowing just 49. Their closest margin of victory during that time was a 40-26 victory over Class 2A Thermopolis in the 2019 season opener.

“This senior class had a little bit more motivation, I think, than some of the other classes,” head coach Kirk McLaughlin said. “Every class is unique in its own way, but not many senior classes have had a shadow ahead of them like this group did. They appreciated being on those teams, for sure, but when it was their time to get something done, they did it.”

Bradshaw, Pelissier and McCafferty have been together since kindergarten in Big Horn. Ostler arrived the following year and Rader in third grade. (Watson has been a classmate for years, but didn’t join the football team until his senior season.)

As freshman, they watched a Big Horn team led by an outstanding group of upperclassmen – five seniors earned all-state honors – win the Class 2A state title in 2016.

“Those guys had no tolerance for anything other than winning and that was great for us young guys to see,” McCafferty recalled.

Winning wasn’t new to the Rams, who were a combined 37-5 from 2012-15 and won a state title in 2013 under former head coach Michael McGuire. But the 2017 senior class did more than bring home the program’s fifth state championship, it laid the groundwork for future classes.

“It started when we were freshmen with that senior class,” Bradshaw admitted. “It’s something we’ve developed at Big Horn … it’s kind of a legacy. It runs through every class. It’s something that we’re fortunate to have that a lot of teams don’t.”

This year’s seniors are quick to credit McGuire for establishing that legacy and McLaughlin for keeping it rolling.

“My first year at Big Horn they were fifth graders so I got to teach them P.E.,” he said. “They were the first class I taught that I got to coach at the high school. I just remember even as fifth-graders they were a really competitive group in a nice way. They were great competitors but they really cared about their classmates.

“They had a big impact on the program even as sophomores.”

The year after winning the 2016 2A state title, Big Horn moved down to 1A/11-man in the reclassification cycle. The Rams were undefeated heading into a Week 3 showdown against defending 1A/11-man champ Pine Bluffs, but the Hornets ended the Rams’ eight-game winning streak with a 22-21 overtime victory. Two months later, Pine Bluffs prevailed 20-16 in the state championship game thanks to a last-minute touchdown.

The Big Horn seniors wouldn’t lose again. They credit those two defeats for the 22 consecutive victories that followed.

“What sticks with me is my sophomore season when we lost to Pine Bluffs twice,” McCafferty recalled. “We knew we were a really good team, but I don’t think we were ready to take that next step and become champions.

“Those two losses propelled us to where we are now and let us know that we couldn’t take winning for granted. We never wanted that feeling again.”

They made sure it didn’t happen.

“I consider both those games against Pine Bluffs as one game,” said Ostler, who paused and then proceeded to go over specific plays from both contests. “We came out the next year determined to finish the fight because we didn’t finish it the year before. We had a chip on our shoulders.

“We played Pine Bluffs for their homecoming the next year, and I can say we had some hate in our hearts for them, even the freshmen who had never played them before had some hate. We scored early and took off from there. I would say that was the start of our season.”

McGuire was no longer on the sideline, but he credits the Hornets for pushing the Rams to greatness.

“That last loss to Pine Bluffs was a learning moment for everyone in the program,” McGuire said. “I think they saw how good they could be.”

“Even though I would have liked to have won four state titles,” he said, “without losing that one we wouldn’t be the team that we were.”

When the Rams walk onto Big Horn Field in the early morning hours Monday for their first practice of the season, there will be less than two weeks to go before their season opener at Class 3A Buffalo. A 22-game winning streak will be on the line. More importantly, the Rams have a legacy to uphold and a standard to live up to.

“The thing I saw with this senior class that stood out wasn’t just what I saw on the football field,” McLaughlin offered. “It was what I saw in school – they’re great students – and what I saw from them on the basketball court and on the track.

“I just hope that the juniors and sophomores and freshmen that saw it can copy it the best they can while adding their own unique wrinkles,” he added. “If it’s anything close to the leadership I saw from this class we’ll be in good shape.”

The Big Horn football seniors walked off the field together one last time as state champions on Nov. 16, 2019 after celebrating with their families and fans in the south end zone of War Memorial Stadium in Laramie. They returned to Big Horn to continue the celebration before competing in basketball, where McCafferty, Bradshaw and Watson helped lead the Rams to a third-place finish at state; and indoor track, where Ostler and Pelissier combined for seven top-four finishes at the state meet.

Unfortunately, the coronavirus pandemic took away their spring track season and denied Pelissier, Bradshaw and Rader one more game together as Shrine Bowl teammates.

“They’re a great group of guys,” Rader said. “I wish I could have played with them again.”

Nine months after that state championship game, the players on the most successful senior class in program history have all gone their separate ways. McCafferty signed to play baseball at Western Nebraska Community College. Pelissier is a preferred walk-on for the University of Wyoming football team. Rader and Ostler will attend Sheridan College and Bradshaw will go to UW, just as students.

The bonds they developed over the years at Big Horn, especially on the football field, won’t allow them to ever truly be apart, though.

“We wanted to win more than anything,” Bradshaw said. “When you’re willing to come together and be a part of something great, then something great is going to happen.”

That was definitely the case with the Rams.

“What stands out to me throughout the whole four years is the dedication every one of us showed,” he said. “And how hard we worked and how badly we wanted to hold that state championship trophy.

“We were so dedicated to the program and, honestly, we just loved the game of football. And I think that’s what brought us our success at the end of the day.”

Terry, who has Down Syndrome, considers being a manager for the Mustangs "his job."

The Mustangs have now won four games in a row in the annual trophy game.

For the second time in three weeks, a high school football game in Wyoming has been canceled because of the ongoing coronavirus pandemic.

The Mustangs rushed for 396 yards in Friday night's victory.

Big Horn head coach Kirk McLaughlin talks to his team after the Rams' win over Cokeville in the Wyoming State High School Class 1A/11-man Championship game in 2018 at War Memorial Stadium in Laramie.

Big Horn's Will Pelissier stretches across the goal line for a touchdown as he is tackled by Cokeville's Treyson Dayton during the Wyoming State High School Class 1A/11-man Championship game on Nov. 16, 2019 at War Memorial Stadium in Laramie.