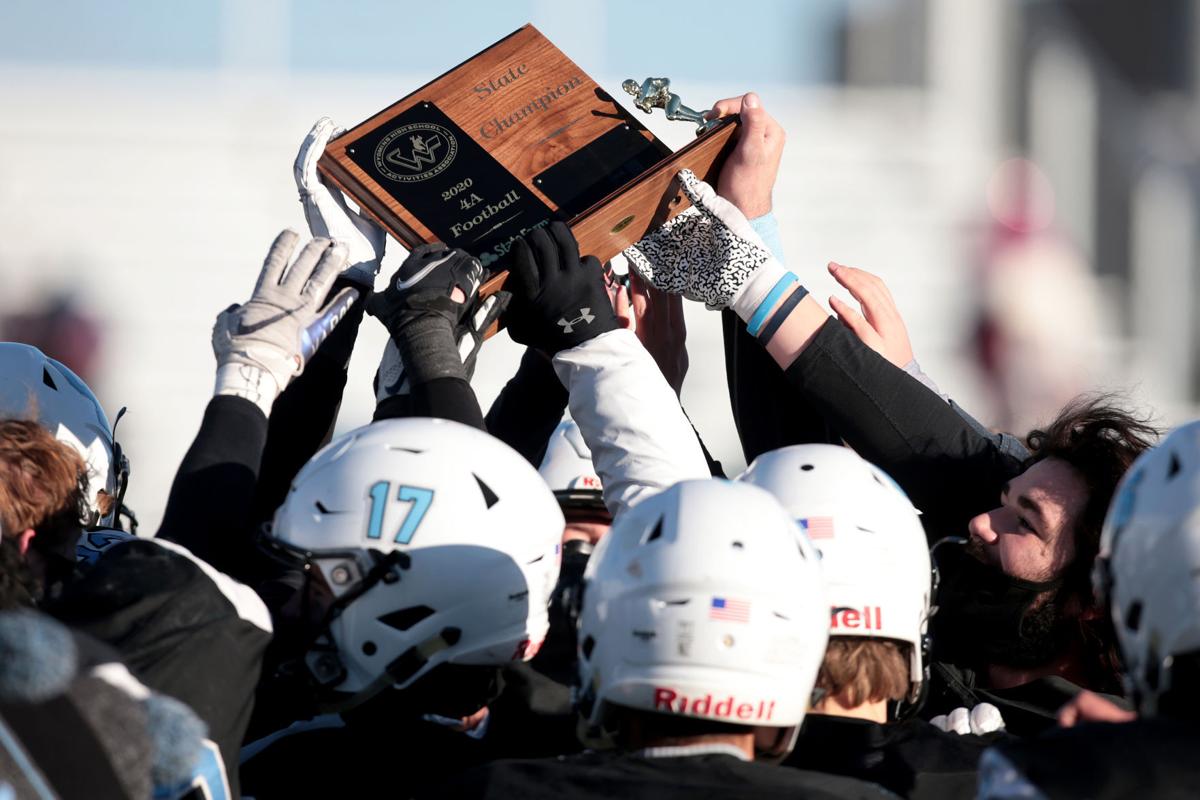 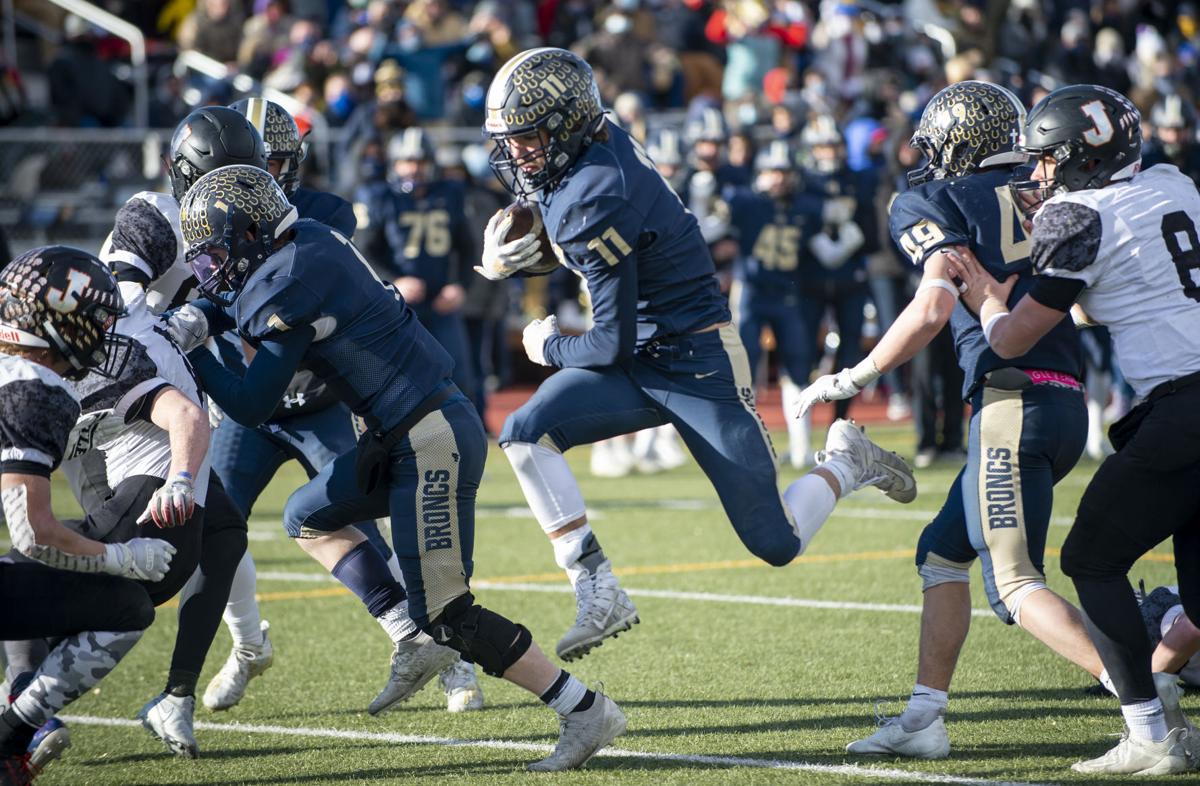 Cody's Drew Trotter runs for a first down in the fourth quarter in the Broncs' 34-13 victory over Jackson in the Class 3A championship game Nov. 14 at Spike Vannoy Field in Cody. 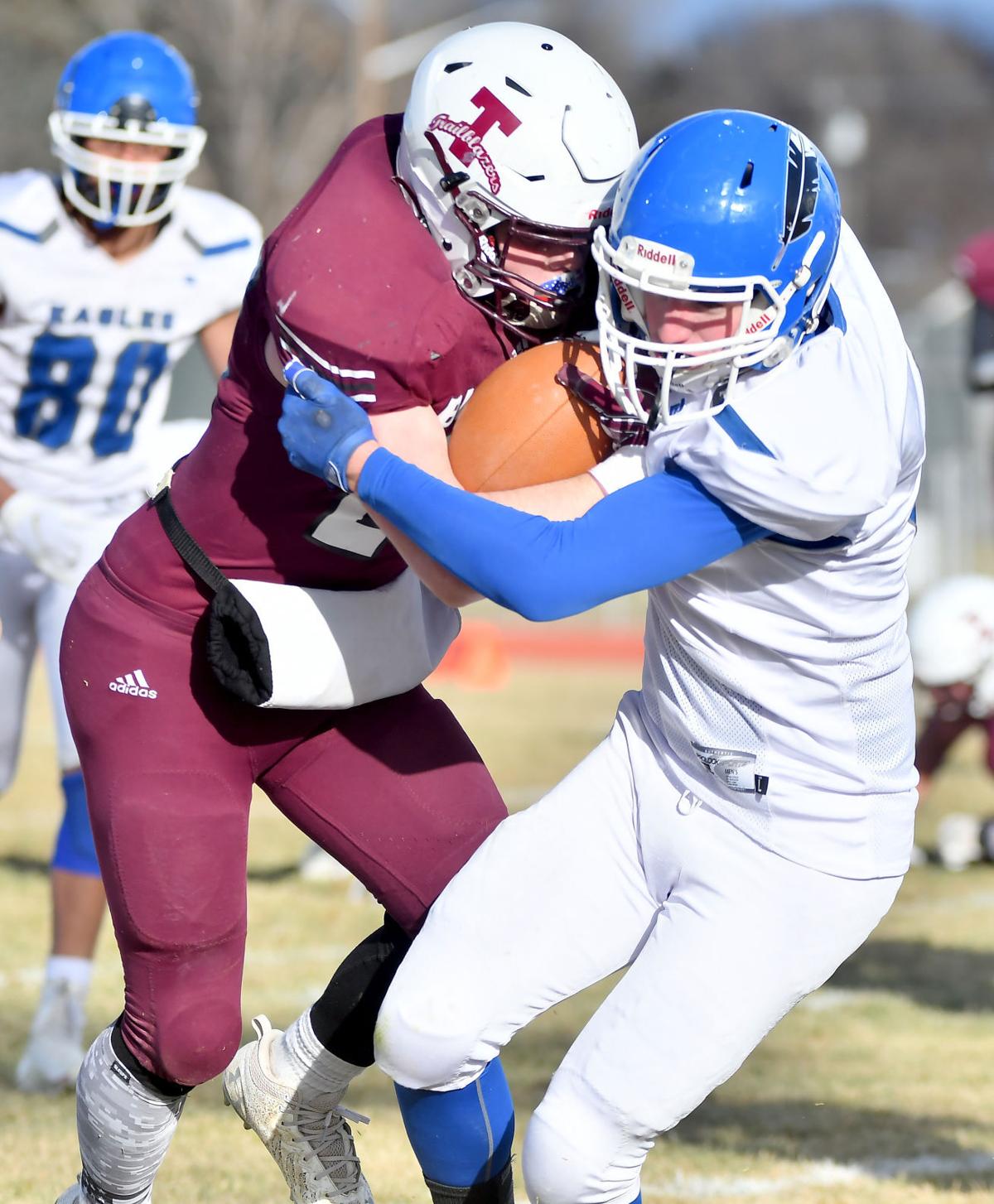 Lyman's Jett Dickerson wraps up Torrington's Carson Schultz during the Class 2A state championship game Nov. 14 at Wiseman Field in Torrington. Dickerson and Schultz were both named to the 2020 Wyoming Coaches Association 2A all-state teams.

For the first time since 2008, all championship games were played at host sites rather than at the University of Wyoming’s War Memorial Stadium as a result of the ongoing coronavirus pandemic.

The 2020 season had relatively few hiccups, with just three games being canceled because of COVID-19 concerns. Saturday’s games brought an end to the fall prep sports seasons, with state-culminating events having been held in golf, tennis, cross country, girls swimming, volleyball and football.

At Cheyenne, senior quarterback Graedyn Buell rushed for 235 yards and four touchdowns, including three in the fourth quarter, to rally the Thunderbirds to the victory.

Buell, who had thrown for 2,989 yards and 38 touchdowns entering the game, attempted only 12 passes — completing 7 for 76 yards to go with an interception — on a windy day at Okie Blanchard Stadium. The T-Birds (11-1) had the ball fourth-and-goal late in the first quarter, but Buell’s pass over the middle was tipped and intercepted by Thunder Basin’s Brody Richardson.

Buell came back with a 1-yard scoring run on East’s next possession for a 7-0 advantage with 9 minutes, 38 seconds remaining in the first half. The Bolts (9-3) answered just before the half when senior running back Jaxon Pikula found the end zone from 18 yards out to tie the game at 7-all heading into the half.

Thunder Basin got a safety early in the third and Pikula struck again in the final minute, this time from 57 yards, to give the Bolts a 15-7 advantage heading into the final quarter. Pikula finished with 238 yards and the two scores on 41 carries.

The fourth quarter belonged to Buell and the T-Birds. His 52-yard scoring run pulled East within 15-13 with 11:45 remaining. On the T-Birds’ next possession, he scored on a 12-yard run and then connected with Garet Schlabs for the 2-point conversion to give East the lead at 21-15.

After the East defense stopped the Bolts on fourth-and-short inside the red zone, the T-Birds faced a third-and-9 at their own 21 with just over 2 minutes remaining. Under pressure, Buell threw to a wide-open Jackson Hesford for a 15-yard gain. Buell then delivered the back-breaker as he got to the outside and outraced the Thunder Basin secondary for a 64-yard touchdown run with 90 seconds to play.

With the victory, East avenged its only loss of the season — 34-28 to the Bolts back on Aug. 28 — and extended its winning streak to 11 games. The T-Birds won their fifth state championship overall and first since 2013. Thunder Basin has lost in the title game each of the past two years.

At Cody, the host Broncs took advantage of four first-half turnovers by the visiting Broncs to build a 26-0 halftime lead and claim their first state tittle in three years.

Cody (10-1) fumbled the kickoff but Jackson returned the favor a few plays later and the Broncs capitalized when Caleb Pryor connected with Cody Phillips for a 60-yard catch-and-run to give the hosts a 7-0 lead with 8:15 to play in the first quarter.

After Jackson fumbled on its next possession, Phillips made it 14-0 with a 5-yard run.

Pryor scored on a 1-yard keeper in the second quarter and Cody went into halftime with all the momentum when Drew Trotter walked into the end zone for a 12-yard score after hauling in a pass from Pryor on the final play of the first half.

Jackson (9-3), which was seeking its first state championship since 2007, pulled within 26-13 on two touchdown passes from Sadler Smith to Colter Dawson. But Cody put the game out of reach with a long drive capped by Trotter’s 5-yard touchdown run with 1:47 remaining.

Jackson entered the game averaging a class-best 274.9 rushing yards per game, but Cody held them to just 73 yards on 36 carries. Junior running back Brody Hasenack, who had rushed for more than 2,00 yards this season, managed just 35 yards on 19 attempts.

Cody’s Nic Talich capped an impressive season by totaling 29 defensive points. The senior linebacker had 16 tackles, 5 unassisted, a sack and a fumble recovery.

At Torrington, shut out for the first three-plus quarters, the Eagles scored two touchdowns in the final 9:28 to win their first state title since 2012.

The Trailblazers were playing without starting quarterback Beau Bivens, who was injured in last week’s semifinal victory over Mountain View.

The teams were locked in a defensive battle for most of the game, with Chase Miller finally putting Torrington (8-3) on the scoreboard with a 29-yard field goal on the final play of the first half.

Lyman (11-1) stopped the ‘Blazers on a fourth-down attempt in Eagles’ territory early in the fourth quarter and senior Preston Brewer capped the scoring drive with a 28-yard touchdown run.

Torrington fumbled the ball back to Lyman on its ensuing possession and quarterback Carter Smith pushed the advantage to 14-3 with a 5-yard scoring run with 6:41 remaining.

Ashton Houskeeper then picked off a long Torrington pass — the ‘Blazers’ fourth interception of the game — to seal the victory.

At Farson, the Pronghorns led 26-8 at the half and held off a fourth-quarter surge by the Longhorns to win their second state title in three years.

Farson (11-0) went undefeated to match the 2017 championship team while handing Meeteetse (8-2) its only losses of the season.

Cody's Drew Trotter runs for a first down in the fourth quarter in the Broncs' 34-13 victory over Jackson in the Class 3A championship game Nov. 14 at Spike Vannoy Field in Cody.

Lyman's Jett Dickerson wraps up Torrington's Carson Schultz during the Class 2A state championship game Nov. 14 at Wiseman Field in Torrington. Dickerson and Schultz were both named to the 2020 Wyoming Coaches Association 2A all-state teams.