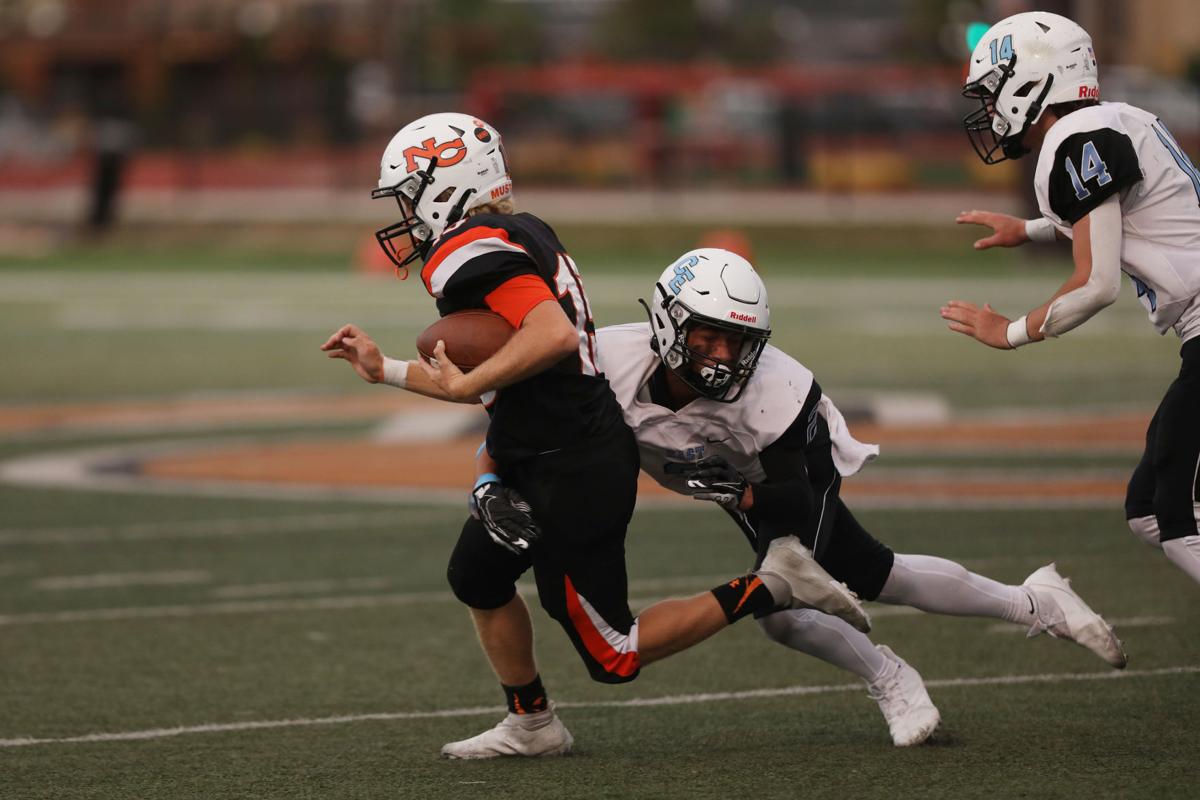 Natrona County quarterback Tyler Hill runs for yardage in the Mustangs' game against Cheyenne East on Sept. 3 at Cheney Alumni Field in Casper. 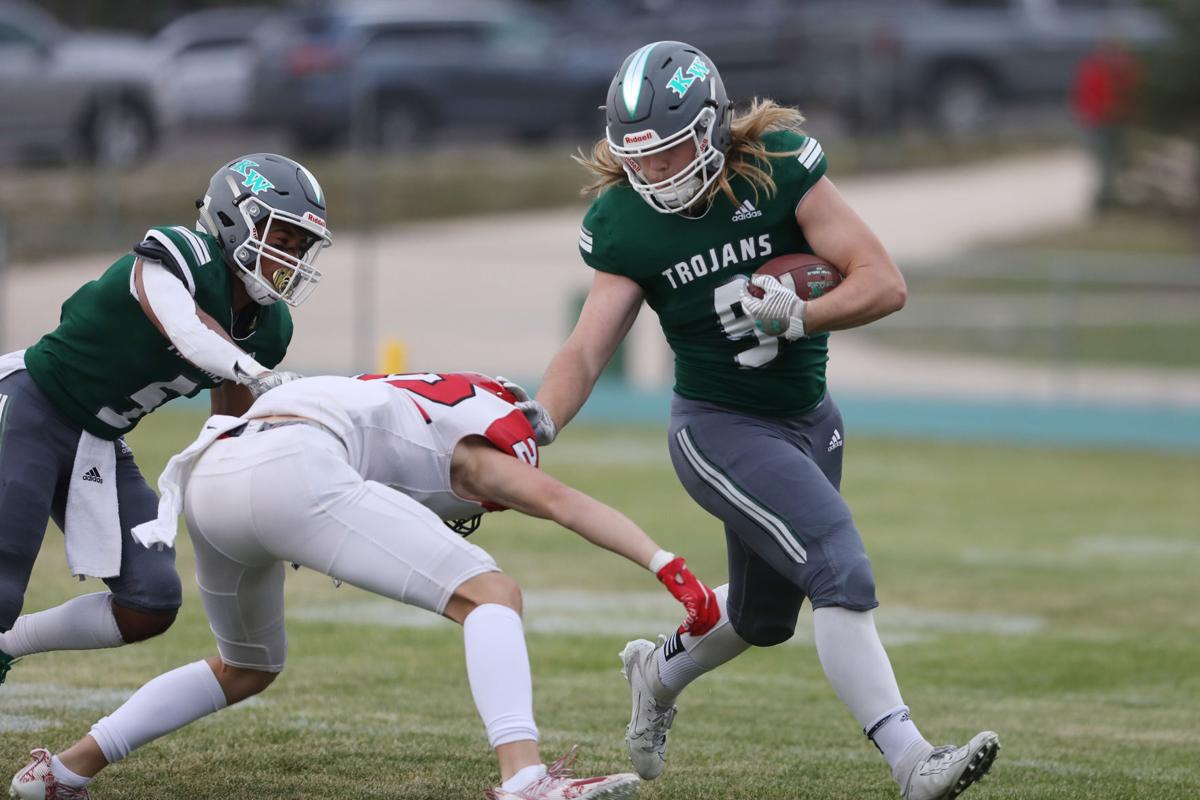 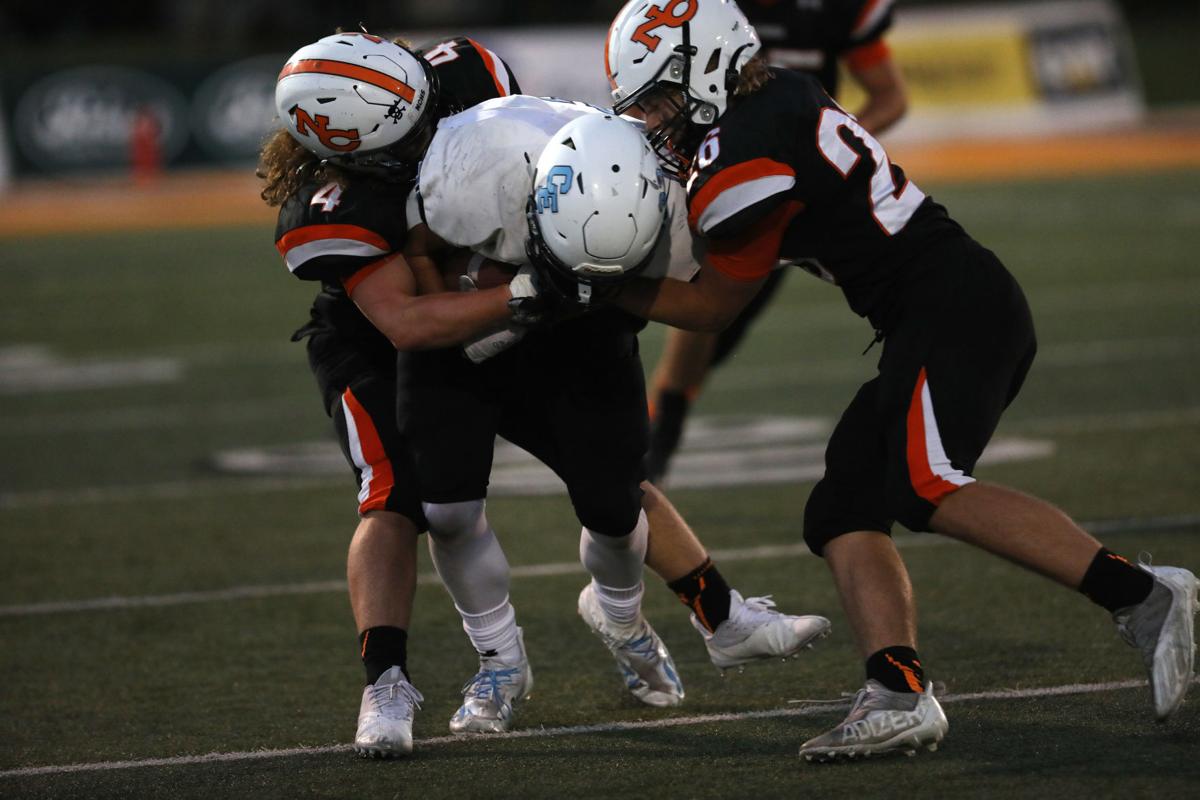 Kelly Walsh and Natrona County both head into Friday night’s Oil Bowl with 2-1 records. But the two teams appear to be on different trajectories entering the annual crosstown rivalry game at NC’s Cheney Alumni Field.

The Mustangs have shutout victories over Cheyenne Central (22-0) and Laramie (45-0) sandwiched around a 14-13 loss to defending state champion Cheyenne East in which the T-Birds stopped NC’s potential game-winning two-point conversion in the final 30 seconds.

The Trojans, on the other hand, saw their bid for the program’s first 3-0 start in 15 years end with a 52-0 shutout loss at top-ranked Rock Springs. The Tigers had nearly 400 yards of total offense while holding KW to 90 (75 rushing, 15 passing).

“Last week was a very big wake-up call,” Kelly Walsh senior linebacker/running back Jesse Thornton said. “This week we’ve been focused and hyped and had a great week of practice.”

Kelly Walsh opened the season with a 70-14 blowout of Cheyenne South and a 21-13 victory over Cheyenne Central. The Trojans clinched the win over Central with a last-minute touchdown pass from senior Hunter Mogen to classmate Devin Muir, but standout senior Cam Burkett was injured on the play and didn’t suit up against Rock Springs. Burkett rushed for 176 yards and two touchdowns against Central and opened the season with two receptions for 129 yards and two scores against South.

Burkett is expected to be on the field for the Oil Bowl, however.

“We’re healthier than we were at this time last week,” KW head coach Aaron Makelky said. “And we expect everybody that should be playing to be there and be ready to go.”

Obviously, health isn’t the only thing the Trojans have to be concerned with Friday.

Natrona County is second in Class 4A in total offense (380.0 yards per game) and third in total defense (234.0 yards per game). The Mustangs also lead 4A with six interceptions and have allowed just one score in the red zone.

“I don’t think I’ve ever seen a team with a better red-zone defense,” Makelky said. “That’s going to be a big challenge. When we get there do we get points, because so far this season they don’t give up many.”

Offensively, the Mustangs have gotten solid play from the two-quarterback system of senior starter Tyler Hill and junior backup Wyatt Powell. Hill has completed 22 of 38 passes for 398 yards and three TDs without throwing an interception; Powell has rushed for 195 yards and three scores.

Junior running back Luke Spencer had a breakout game in the win over Laramie as he rushed for 174 yards on just 10 carries and had touchdown runs of 64 and 54 yards. He also returned an interception for an 81-yard score.

“We did a lot of good things,” NC head coach Steve Harshman said, “but we had a lot of penalties that seemed to interrupt the flow, especially in the second half. But I think we’re getting better and I think we’ve had our best practice of the year this week.”

Natrona County leads the all-time series 43-13 and has won the last four Oil Bowls, including a 35-14 victory last year. The Mustang seniors are looking forward to making it five in a row.

Natrona County vs Kelly Walsh football: Looking back at 56 years of the Oil Bowl

“Half of our season is built around this week,” NC wide receiver/defensive back Billy Brenton said. “And one of our main goals is to win the Oil Bowl.”

Added Roman Overstreet, who missed last year’s game with an injury: “It’s at home my senior year so it’s definitely going to mean a lot. We haven’t lost to Kelly Walsh and we want to keep it that way.”

The Trojans know they have their work cut out if they want to bring the Oil Bowl trophy to the east side of town for the first time since 2016.

“I think we have all the talent in the world,” Thornton stated. “We just need the confidence and the knowingness that we can go out there and make something happen.”

Senior Lane Johnson knows the Trojans won’t back down from the challenge.

“If we work together we can get the job done,” he said.

It might be a tall order, but rivalry games often bring out the best in the team coming in as the underdog. Makelky is hoping that proves to be the case Friday.

“I’m usually the first guy that’s going to say you’ve got to play down the rivalry,” he said, “but I think that’s exactly what we need this week. If we can’t get fired up to play against these guys I don’t what would.”

DEFENSE NEVER RESTS: NC has shut out two opponents and has allowed just 14 points on the season.

HE SAID IT: "I don’t think I’ve ever seen a team with a better red-zone defense.” -- KW head coach Aaron Makelky.

HISTORY: NC has won four in a row and leads the all-time series 43-13.

HE SAID IT: "We haven’t lost to Kelly Walsh and we want to keep it that way.” -- NC senior Roman Overstreet.

The storylines for Friday night’s game between Natrona County and Thunder Basin in Gillette are numerous.

Even without starting quarterback Gavin Goff, Cheyenne East was too much for Kelly Walsh on Friday night.

Trojans have lost four of five since a 2-0 start to the season.

Kelly Walsh football continues to come up empty on offense

The Kelly Walsh Trojans struggled offensively Friday night and fell to 3-4 on the season with a 42-0 shutout loss at Sheridan.

Natrona County quarterback Tyler Hill runs for yardage in the Mustangs' game against Cheyenne East on Sept. 3 at Cheney Alumni Field in Casper.