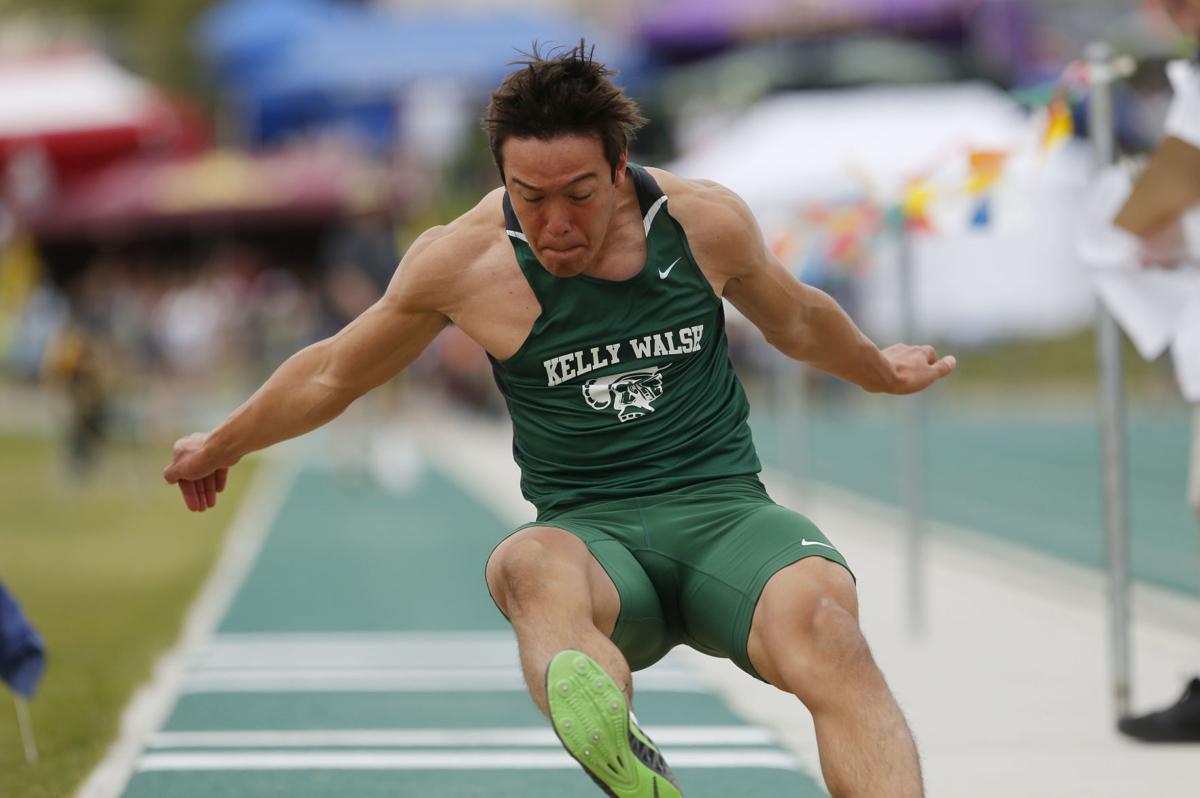 Kelly Walsh's Emory Yoosook competes in the Class 4A boys long jump on May 16, 2019 during the Wyoming State High School Track and Field Championships at Harry Geldien Stadium in Casper. 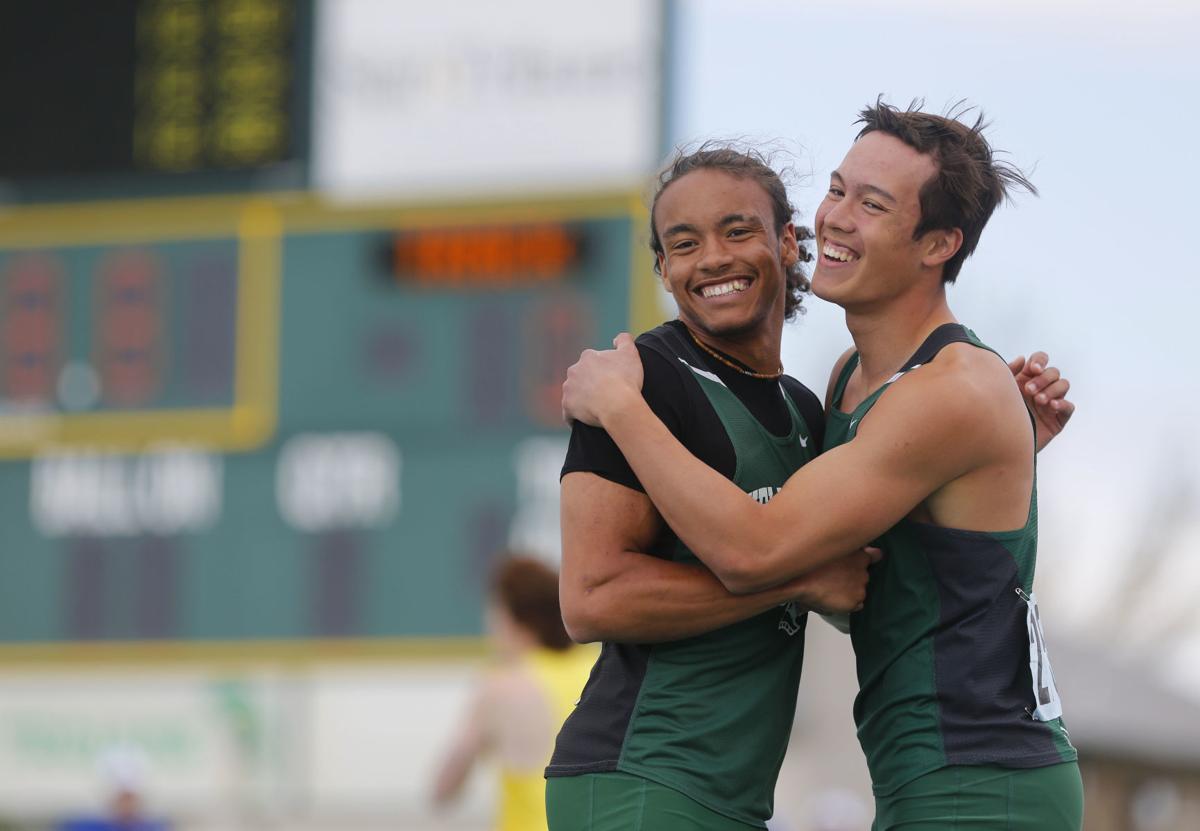 Kelly Walsh's Donte Wilson, left, and Emory Yoosook embrace after their preliminary heat of the Class 4A boys 100-meter dash during the Wyoming State High School Track and Field Championships on May 17, 2019, at Harry Geldien Stadium in Casper. 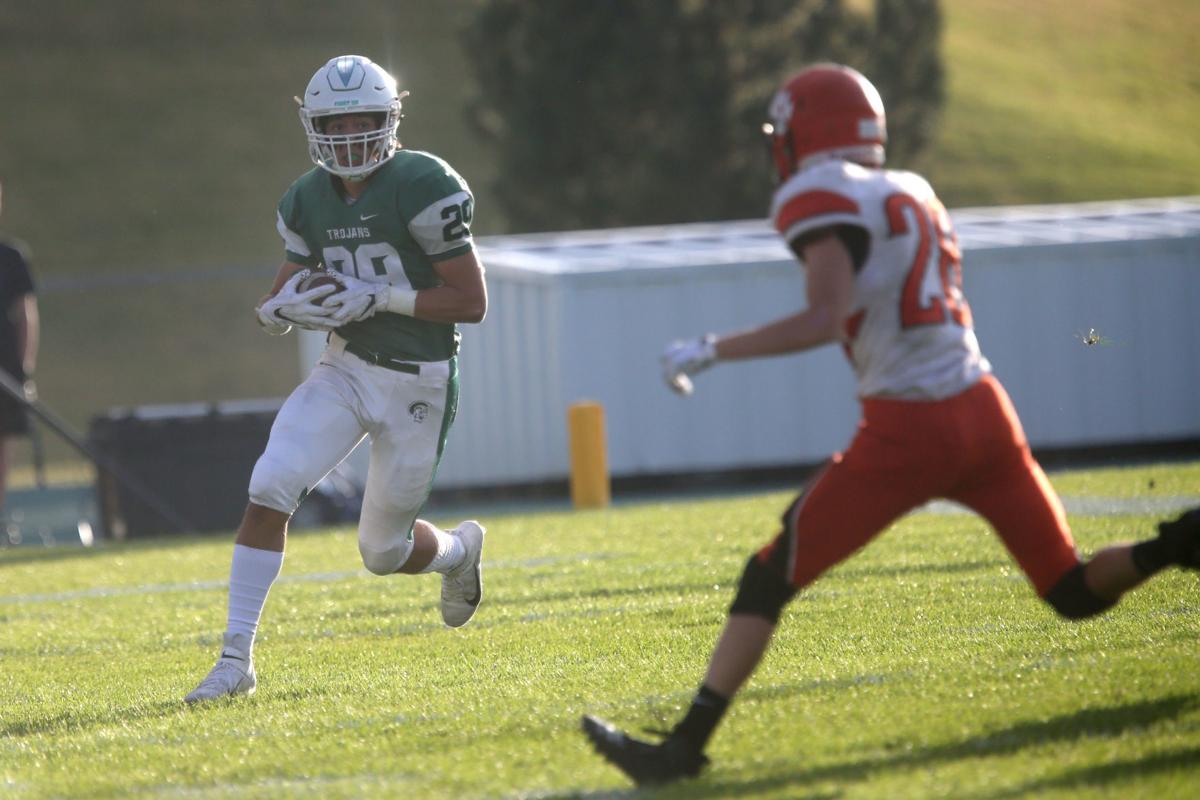 Kelly Walsh's Emory Yoosook runs for yardage in the Trojans' game against Rock Springs during their game on Sept. 20, 2019, in Casper.

Emory Yoosook should be getting ready to defend his state long jump title as well as helping Kelly Walsh try to win back-to-back team championships. Unfortunately, because of the coronavirus pandemic that forced the cancellation of the spring sports season, Yoosook is left to think about what could have been.

“It’s definitely hit me now,” Yoosook said in a phone interview Saturday. “I didn’t think too much about it at first, but now that I think about it, I would be getting ready for state next week.

“Not being able to defend the team title is tough,” he added. “Long jump is a big passion for me, but anything I can do to help the team succeed is more important to me.”

Yoosook is one of 24 athletes who would have been trying to repeat as an individual gold medalist at the 2020 Wyoming State High School Track and Field Championships scheduled for May 21-23 at KW’s Harry Geldien Stadium.

His home stadium was where Yoosook had his coming-out party last year. Although he entered the state meet with the No. 2 mark in Class 4A, Natrona County senior Hunter Brown came in as the two-time defending state champ and had 4A’s top mark at 22 feet, 8.25 inches, which was nearly 1 foot farther than Yoosook’s best jump.

Yoosook still trailed Brown heading into his final jump. But Yoosook saved the best for last, leaping a personal best 23-0.25 to get the win.

“Going into that last jump I just thought it was all-or-nothing,” Yoosook remembered. “I was the underdog in the state meet so I just gave it all I had and the outcome was great.”

He also finished fourth in the 200-meter dash and ran a leg on the Trojans’ winning 4x100 relay team. Those points not only helped Kelly Walsh score a six-point victory over Sheridan in the team race, but served as a precursor for Yoosook’s senior season.

While Kelly Walsh struggled to a 2-8 season in football, Yoosook finished second on the team in rushing yards and led the Trojans with three rushing touchdowns. Not surprisingly, he found his stride during the indoor track season. At the state meet, Yoosook was part of KW’s winning 4x200 relay team, finished third in both the 55-meter dash and the long jump and fourth in the 200.

But it was at the Simplot Games on Feb. 14 in Pocatello, Idaho, where Yoosook rose to the challenge. Competing against some of the nation’s top high school athletes, Yoosook won the long jump with a leap of 22-04.25.

“That was awesome!” Yoosook exclaimed. “Coming in I wasn’t sure I had the potential to get first place, but I ended up doing that.

“It just proves that kids from Wyoming have potential and we take this serious. I still get people that say, ‘Oh, you guys ride horses to school.’ We just want to take our competition to the next level.”

Yoosook will do just that in the fall. He has signed to continue his track and field career at Chadron State College, where he’ll compete in long jump and run sprints for the Eagles.

“I think we all knew Emory would blossom into what he has become,” Coventry said. “He was a little thinner and a little more wide-eyed when he was a freshman, but by the time he was a sophomore he was a focused and much stronger athlete. And in his junior year he became a clutch performer for Kelly Walsh.

“It’s a combination of maturity, hard work in the weight room and at practice and a will to be the best.”

Even though Coventry didn’t get a chance to coach Yoosook during his final track and field campaign, the memories of what Yoosook did last year at state and at the Simplot Games this year will stay with him.

“One of the great things about Emory is he never shied away from any competition,” Coventry recalled, “whether it be in Wyoming or in the national spotlight. And with his demeanor and his calm and cool attitude he proved that he could compete with anybody at any level.

“And not only is Emory one heckuva great athlete and competitor, but he is a great kid. He is popular with his teammates, his teachers and his coaches. The entire Yoosook family is a class act. I can’t think of one person that dislikes Emory, and he has a million-dollar smile.”

Even though Yoosook has only recently been able to work out at local gyms, he lifted weights and ran on a treadmill at home during March and April in preparation for Chadron State.

MISSING OUT: With the cancellation of all spring sports last month, Kelly Walsh senior Emory Yoosook won't be able to defend his long jump title at the state track and field meet.

HE SAID IT: “That was awesome! Coming in I wasn’t sure I had the potential to get first place, but I ended up doing that." -- Yoosook.

Kelly Walsh's Emory Yoosook competes in the Class 4A boys long jump on May 16, 2019 during the Wyoming State High School Track and Field Championships at Harry Geldien Stadium in Casper.

Kelly Walsh's Donte Wilson, left, and Emory Yoosook embrace after their preliminary heat of the Class 4A boys 100-meter dash during the Wyoming State High School Track and Field Championships on May 17, 2019, at Harry Geldien Stadium in Casper.

Kelly Walsh's Emory Yoosook runs for yardage in the Trojans' game against Rock Springs during their game on Sept. 20, 2019, in Casper.