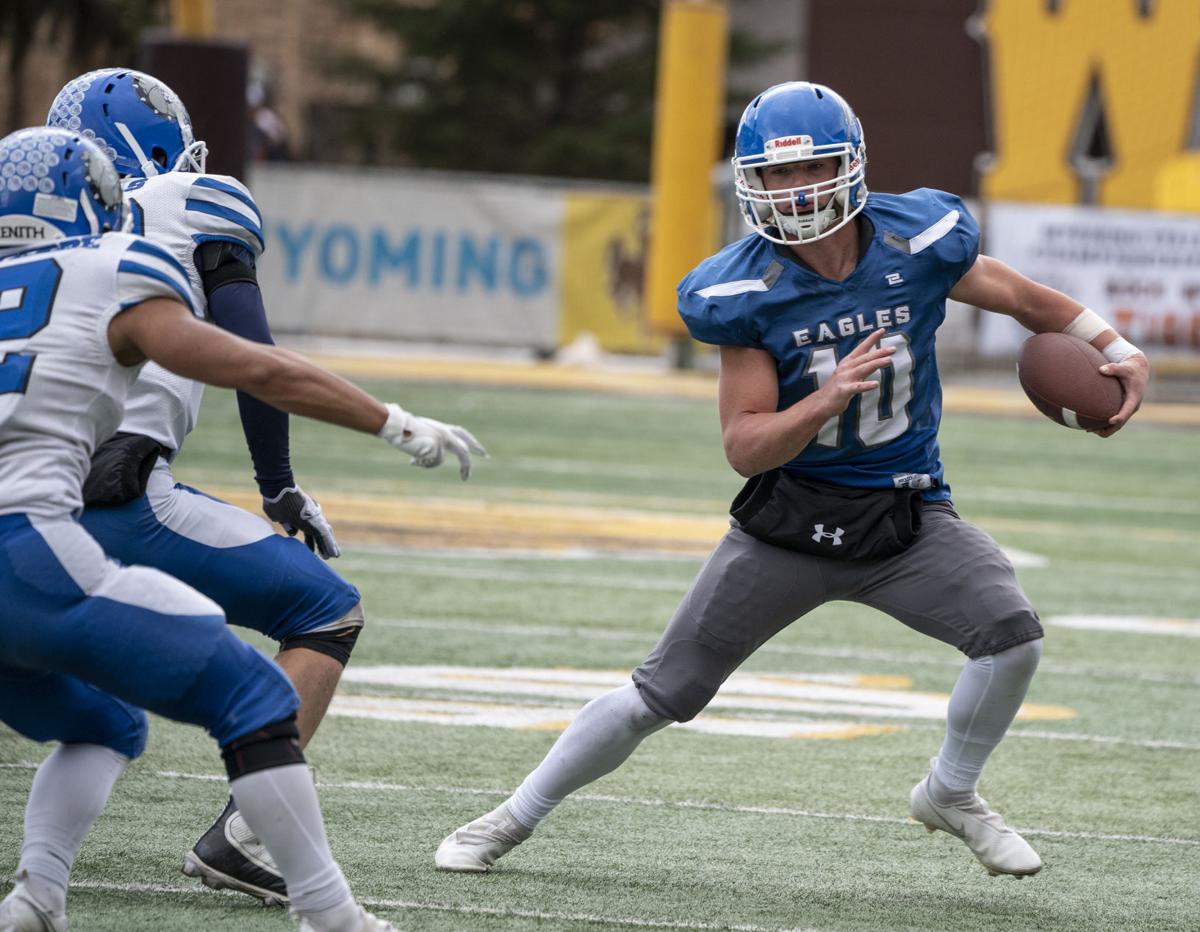 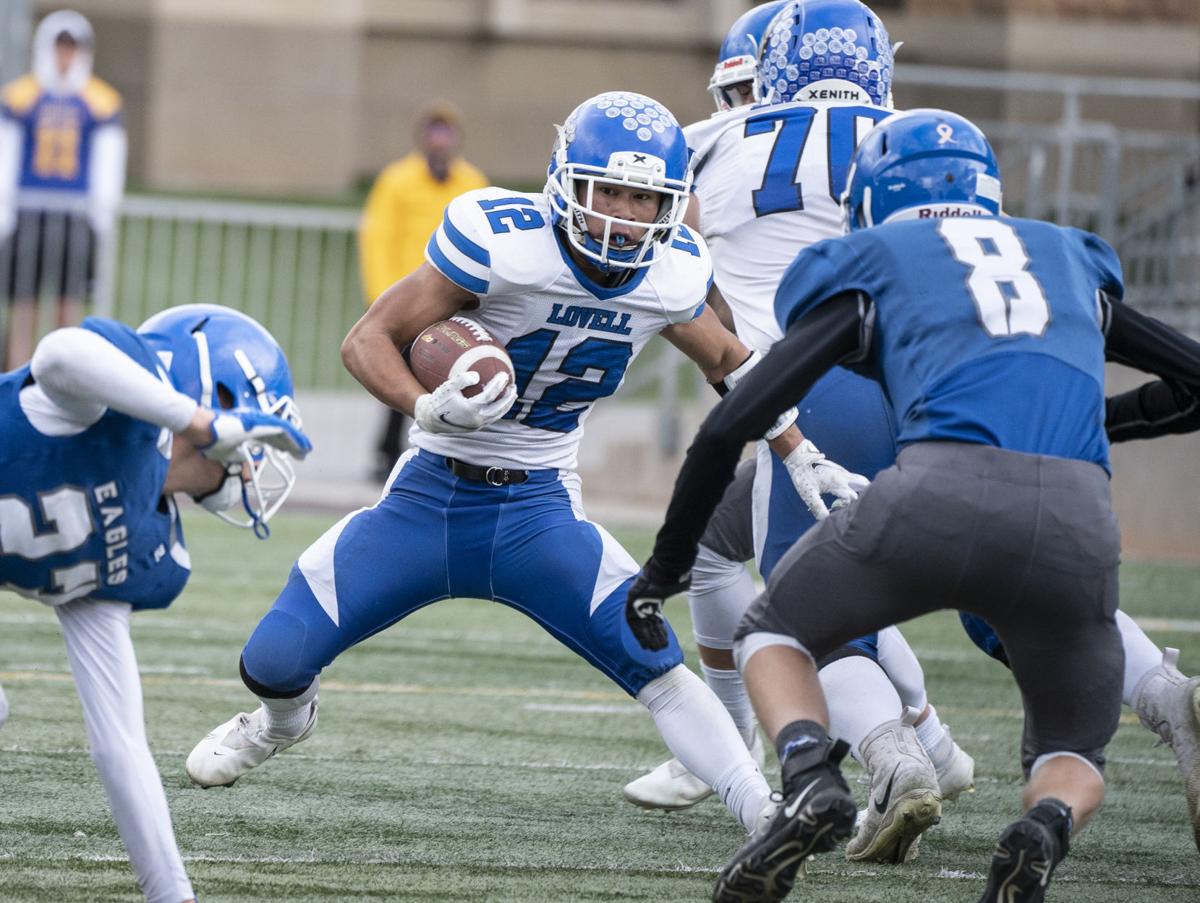 Lovell’s Amos Monterde runs for yardage against Lyman during the Wyoming State High School Class 2A Championship game on Saturday at War Memorial Stadium in Laramie. 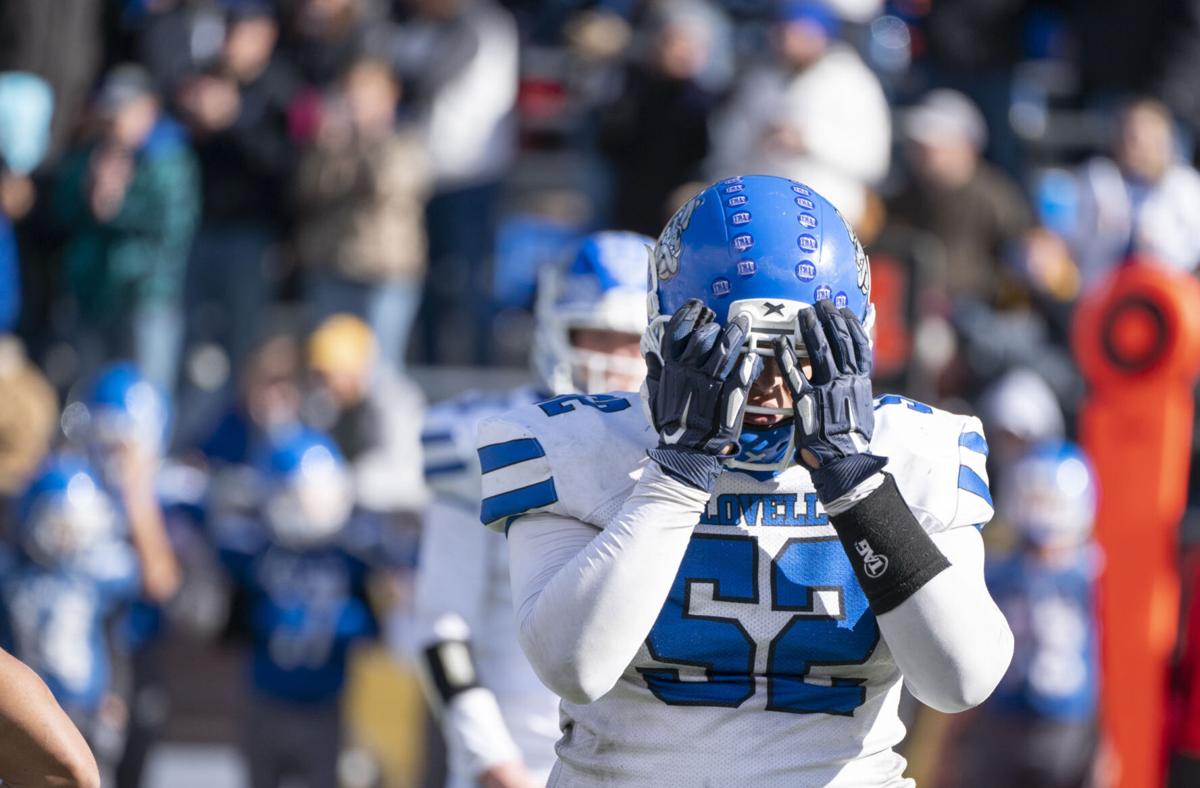 Lovell’s Kobe May reacts as the clock runs out in the Bulldogs' loss to Lyman in the Wyoming State High School Class 2A Championship game on Saturday at War Memorial Stadium in Laramie.

LARAMIE — There were no secrets to what Lovell and Lyman wanted to do Saturday. The Bulldogs and Eagles came into the Wyoming State High School Class 2A Football Championship game with the top two rushing attacks in the classification.

So of course it was a fourth-quarter interception by Lyman senior Alex Bradshaw that proved to be the decisive play in the Eagles’ 8-6 victory at the University of Wyoming’s War Memorial Stadium.

“I just happened to be in the right spot at the right time,” Bradshaw said.

Bradshaw’s pick of Lovell freshman quarterback Davin Crosby at the Lyman 43-yard line with 3 minutes, 18 seconds remaining proved to be the last gasp for the Bulldogs.

“I was out in the flat and I saw my running back block,” Lyman senior McKoy Smith said of the interception. “I saw the ball in the air and looked back and saw that Alex was the only one there. That was the biggest play of the game.”

Lyman junior quarterback Ashton Houskeeper, who finished with 130 yards rushing, carried the ball seven times and picked up a crucial first down as the Eagles ran out the clock to cap an undefeated season and their second consecutive state title.

“Alex gave up that big reception down the sideline so he made up for it,” Lyman head coach Dale Anderson said. “He made a great play and allowed us to finish it. We expect our seniors to make plays in those situations.

“This win is a credit to our kids and our phenomenal coaching staff.”

The Lyman offensive and defensive line deserved a lot of the credit. The Eagles managed to grind out 196 rushing yards on 50 carries against a Lovell defense that came into the game allowing just 80.6 rushing yards per game.

Lyman found the end zone first when senior Chevy Fackrell burst up the middle for a 9-yard touchdown in the first quarter. Fackrell’s TD capped a nine-play, 55-yard drive that consisted of all running plays. Houskeeper stretched the ball across the goal line for the two-point conversion and the 8-0 lead.

“Rho (Mecham) and Morgan (Hatch) just opened a hole and I ran through it,” Fackrell explained.

Fackrell’s second half got off to a tough start before the kickoff. Coming out of the locker room, he ran through a breakaway banner in the end zone.

“I couldn’t see what was in front of me,” he said. “I was going pretty fast and hit the goalpost and screwed up my knee pretty bad.”

Thankfully for Fackrell and the Lyman faithful, the Eagles defense was up to the challenge of slowing down the Bulldogs.

Lovell’s best drive of the first half — a nine-play, 38-yard effort — ended at the Lyman 33 when McKoy Smith corralled Lovell running back Amos Monterde before he was able to get to the outside on a fourth-down play. The drive included all three of the Bulldogs’ first downs of the half.

Lovell nearly got the break it needed early in the third quarter. A 57-yard punt by Meyjl McArthur pinned the Eagles at their 1-yard line. After failing to get a first down, Lyman’s Smith dropped back to punt at the goal line. Lovell got penetration and blocked the punt, but the ball bounced back to Smith, who ran for 13 yards and a first down.

“They slipped a block and they were there,” Smith said. “I thought, ‘Oh, crap! This is scary!’ But I knew what to do.”

Lovell finally got on the board on the second play of the fourth quarter when Monterde followed 6-foot-5, 275-pound senior Quinn Lindsay into the end zone. But Lyman stuffed the Bulldogs on the two-point conversion to preserve the lead.

“That’s where you build character,” Mecham said. “You need the power to dig deeper than them. It’s hard to move those big guys, but we knew if we got low on them we could move them and get the running game going.

“This is the greatest feeling.”

GAME-CHANGER: Lyman senior Alex Bradshaw's fourth-quarter interception allowed the Eagles to run out the clock and repeat as state champion.

HE SAID IT: "I just happened to be in the right spot at the right time." -- Bradshaw.

Lovell’s Amos Monterde runs for yardage against Lyman during the Wyoming State High School Class 2A Championship game on Saturday at War Memorial Stadium in Laramie.

Lovell’s Kobe May reacts as the clock runs out in the Bulldogs' loss to Lyman in the Wyoming State High School Class 2A Championship game on Saturday at War Memorial Stadium in Laramie.