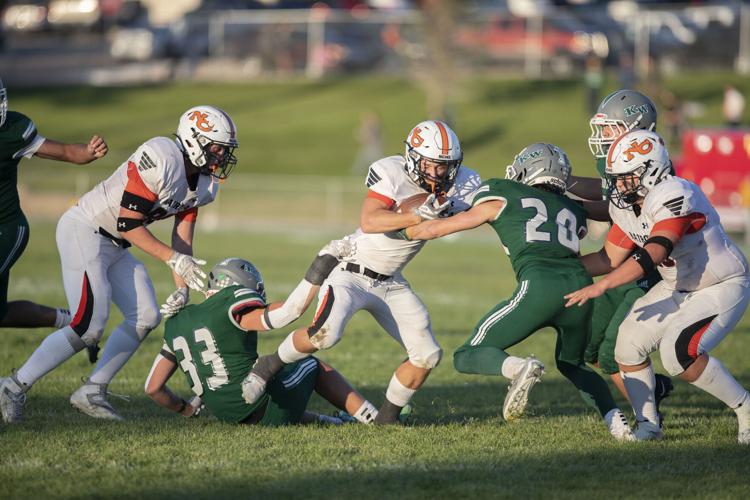 Kelly Walsh's Jonas Bird (33) and Erich Hulshizer try to bring down Natrona County running back Mason Weickum during the Oil Bowl on Friday at Harry Geldien Stadium in Casper. 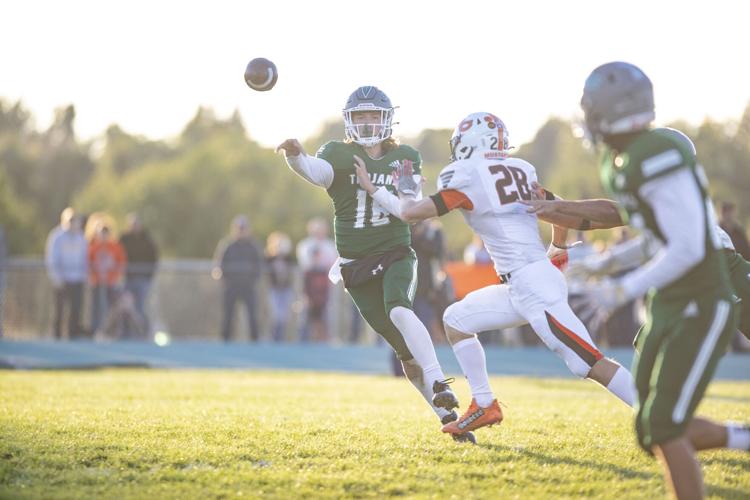 Midway through the third quarter of Friday night’s Oil Bowl, Kelly Walsh had momentum. And then Mason Weickum and Natrona County took it away.

The end result was a 26-6 victory for the Mustangs, who have now won six consecutive trophy games against their crosstown rivals.

The host Trojans had just trimmed the Mustangs’ lead to 13-6 on senior Gibson Sasser’s pass to the flat that classmate Aiden Emanuelson turned into a 39-yard touchdown with 5 minutes, 15 seconds remaining in the quarter. The east side of the Harry Geldien Stadium bleachers were rocking, the Kelly Walsh band was going crazy and the players on the KW sideline were exchanging hugs and high-fives.

Less than 20 seconds later, Weickum was in the end zone. The reigning Class 4A state champ in the 110-meter hurdles took an inside handoff from quarterback Wyatt Powell, got to the edge and outraced the Trojans secondary for a 74-yard momentum-shifting score.

“We knew we couldn’t let them back in the game,” Weickum said of his touchdown. “Once they scored we had to score right back. The blocking from the wide receivers was great.”

On a night when Natrona County’s three leading receivers combined for just two catches for 10 yards, it was once again the Mustangs’ rushing attack that wore the Trojans down. Weickum, who added a 38-yard touchdown run in the fourth quarter, finished with 173 yards on 17 carries. Powell toted the rock 21 times for 106 yards, including a 14-yard scoring run to give Natrona County (3-1) a 13-0 halftime lead.

The Mustangs had opportunities to go into the locker room with an even bigger advantage, but were unable to take advantage of early field position.

Breckin McClintock intercepted Sasser on the second play of the game to give NC the ball at the KW 6, but the Trojans’ defense stiffened and Emanuelson blocked Rogan Potter’s 27-yard field-goal attempt. A 6-yard punt on Kelly Walsh’s next possession gave the Mustangs the ball at the KW 32, but they turned it over on downs.

“The way our defense started the game was phenomenal,” KW head coach Aaron Makelky stated. “We couldn’t have given them any better field position. Defensively we were physical. (The Mustangs) were going backwards every play up front. We did it for a quarter, but we’ve got to be able to do it for a whole game to beat a good team like that.”

Natrona County started five of their six first-half drives in Kelly Walsh territory, but managed only 13 points. Evan Lango got the Mustangs on the board when he caught a pass from Powell near the sideline and took it in for a 40-yard touchdown with 2:20 to play in the opening quarter.

Powell capped NC’s next drive with the 14-yard burst up the middle early in the second quarter. The six-play, 42-yard drive was strictly on the ground, with Powell carrying four times for 31 yards and Weickum rushing twice for 11 yards.

“We just had to perfect our fundamentals,” NC senior offensive guard Colby Harlin said. “Once we got those down we were rockin’ and rollin’.”

Added senior lineman Cody Crawford: “We just had to make some adjustments and get our momentum back.”

Weickum’s long touchdown run gave it back to the Mustangs for good. And the defense made sure they kept it.

NC junior Beau Russell intercepted Sasser on Kelly Walsh’s next possession. The Trojans were forced the next time they had the ball and the Mustangs made it a three-score game on Weickum’s second TD. KW’s final two drives ended with incomplete passes.

Sasser finished 12-of-24 for a season-high 152 yards with the touchdown to Emanuelson and the two picks. The Trojans also rushed for nearly 100 yards against a defense that was allowing just 64.0 rushing yards per game.

“We bent but we didn’t break,” Powell said of the Mustangs’ defensive effort. “On offense, Mason ran like an absolute madman tonight and our offensive linemen were opening holes.”

In the end, that’s what it took for Natrona County to retain the Oil Bowl trophy.

Natrona County now leads the all-time series, which started in 1965, 45-13. The Mustangs are home this week to take on winless Cheyenne South while Kelly Walsh travels to Gillette to take on the 3-1 Camels.

WEICKUM'S BREAKOUT: NC senior running back Mason Weickum scored on a 74-yard run just two plays after KW had cut the lead to 13-6 midway through the third quarter.

HE SAID IT: “We knew we couldn’t let them back in the game. Once they scored we had to score right back." -- Weickum.

Mustangs force six turnovers and win fourth in a row with 51-0 shutout of Bison.

Mustangs are 11-0 all-time against Bison.

After opening the season with three of four games at home, Trojans welcome chance to get better with back-to-back road games.

Natrona County vs Kelly Walsh football: Looking back at 57 years of the Oil Bowl

With the Oil Bowl set for Friday, here's a review of past clashes between Natrona County and Kelly Walsh.

Mustangs (2-1) have won five trophy games in a row against the Trojans and lead the all-time series 44-13.

Big Horn and Evanston in action at the Casper Invite

Who can afford to buy the Phoenix Suns?

Who can afford to buy the Phoenix Suns?

Kelly Walsh's Jonas Bird (33) and Erich Hulshizer try to bring down Natrona County running back Mason Weickum during the Oil Bowl on Friday at Harry Geldien Stadium in Casper.