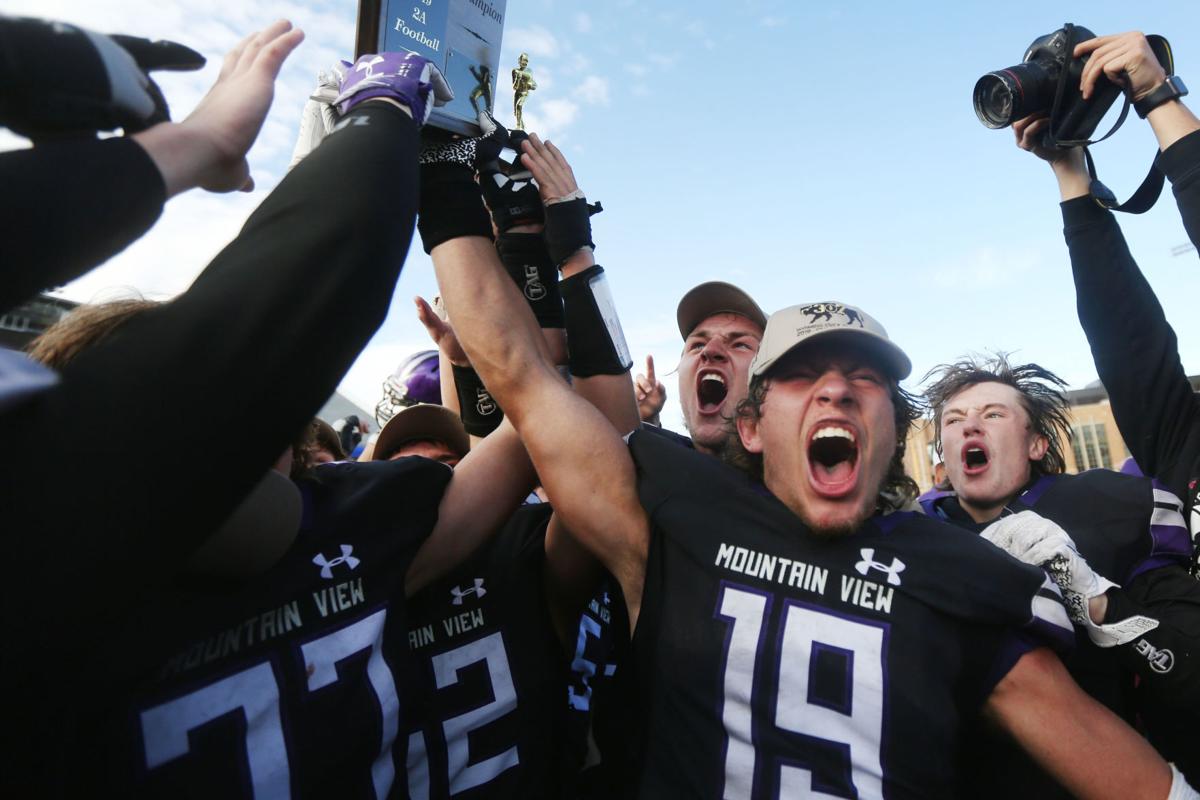 Mountain View's Kimball Madsen and his teammates celebrate after defeating Buffalo to win the Class 2A state football championship on Nov. 15, 2019 at War Memorial Stadium in Laramie. 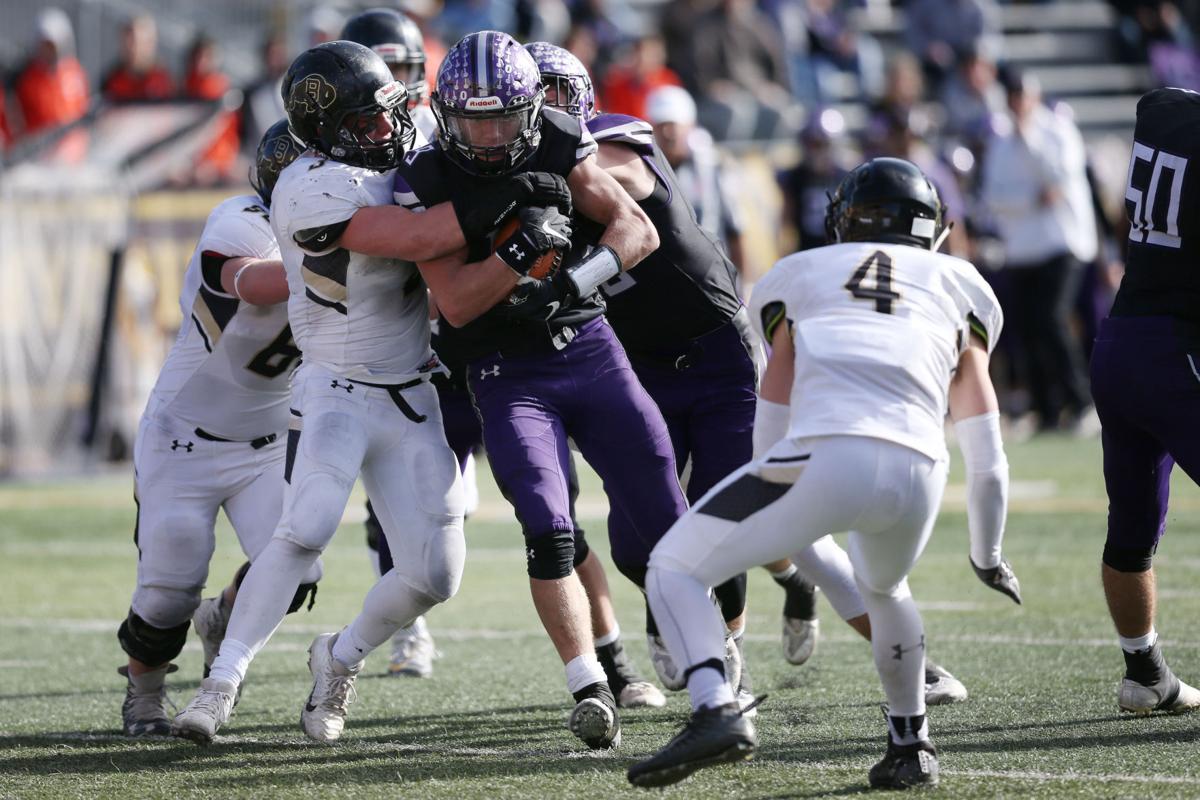 Kimball Madsen finished his prep career at Mountain View High School as one of the state’s most prolific offensive players. The 2020 graduate played quarterback and running back for the Buffalos as a sophomore and junior before shifting almost exclusively to running back as a senior.

The three-year starter accounted for nearly 5,500 all-purpose yards and 52 touchdowns in helping lead Mountain View play to three consecutive Class 2A state championship game appearances and titles in 2017 and ‘19. Madsen was also a standout linebacker for the Buffalos.

Now the 6-foot-1, 210-pound multi-sport athlete — he was all-state in basketball and helped the Buffalos win the 2019 Class 3A track and field championship — is ready for his next challenge on the gridiron.

“I’m going to walk on at Wyoming,” Madsen said in a phone interview last month. “I was going to serve a mission and I went to the (Missionary Training Center), but I felt there was something else I needed to be doing right now.”

After returning from the MTC, Madsen reached out to UW tight ends and fullbacks coach Shannon Moore, who had first contacted Madsen during his senior year.

“I called up Coach Moore and I told him I was going to be attending UW in the fall,” Madsen recalled. “They had recruited me when I was in high school so there was already interest there and I knew the coaches.”

Madsen informed Moore that he was interested in playing for the home-state Cowboys. With no roster spots available, though, the plan was to have Madsen be an equipment manager this season and then join the team next spring.

Everything seemed in place until Madsen received a call from Moore.

“He called me out of nowhere and said they had a spot open because they were thin at fullback,” Madsen said. “And he told the other coaches that he would pick me over everybody else that was on the walk-on board.

“He asked me if I wanted to play and I said, ‘Absolutely!’ There was no hesitation on my part.”

Madsen had received interest from local schools like Rocky Mountain College, Colorado School of Mines and Dickinson State, among others, but none of them had the pull, or the prestige, of playing for the Cowboys.

“I’ve always wanted to go to Wyoming,” he said. “And the coaches have done a great job stressing how important it is for me to get an education and how much they’ll help me. Because I know that whether it’s right after high school or in 20 years, football ends but having an education doesn’t.

“But I also know if there is an opportunity to play I’ll jump all over it.”

Even if it means playing a position he’s never played before.

“I thought I was going to be able to play linebacker because that’s where they were recruiting me when I was in high school,” Madsen stated. “I thought at least it was going to be a defensive position, but when Coach Moore said fullback I jumped all over that.

“I’ve never played fullback before,” he added, “but I’m up for the challenge and I’m ready to go. I’m open to any chance I have to play football and I’ll do whatever I have to do to play at UW. I’ll play on the line if that’s what they need.”

Madsen will join a fullback room that features two other in-state players in Parker Christensen (6-2,229), a redshirt freshman from Sheridan, and Caleb Driskill (6-2, 235), a freshman from Thunder Basin. Christensen, who played tight end last season for UW, enters fall camp atop the depth chart at the position, while Driskill is listed as the backup.

Madsen expects to be in Laramie by the end of the month in order to get acclimated prior to the start of fall camp in August. With the belief that he’s doing what he needs to at a place he loves, Madsen is ready for whatever comes next.

“Looking back there is no way I could have seen this happening,” he said. “But the way that everything has worked out is kind of cool.”

WHO: Kimball Madsen, a 2020 graduate of Mountain View High School.

NEW POSITION: Madsen played quarterback, running back and linebacker at Mountain View, but was asked to walk on as a fullback at Wyoming.

HE SAID IT: “I’ve never played fullback before, but I’m up for the challenge and I’m ready to go." -- Madsen.

What was the craziest story in sports yesterday?

Will we see Max Scherzer traded?

Will we see Max Scherzer traded?

How may players on the Cubs will be traded before the deadline?

How may players on the Cubs will be traded before the deadline?

The in-state product has put himself in position for playing time this fall with his physicality and toughness.

Mountain View's Kimball Madsen and his teammates celebrate after defeating Buffalo to win the Class 2A state football championship on Nov. 15, 2019 at War Memorial Stadium in Laramie.