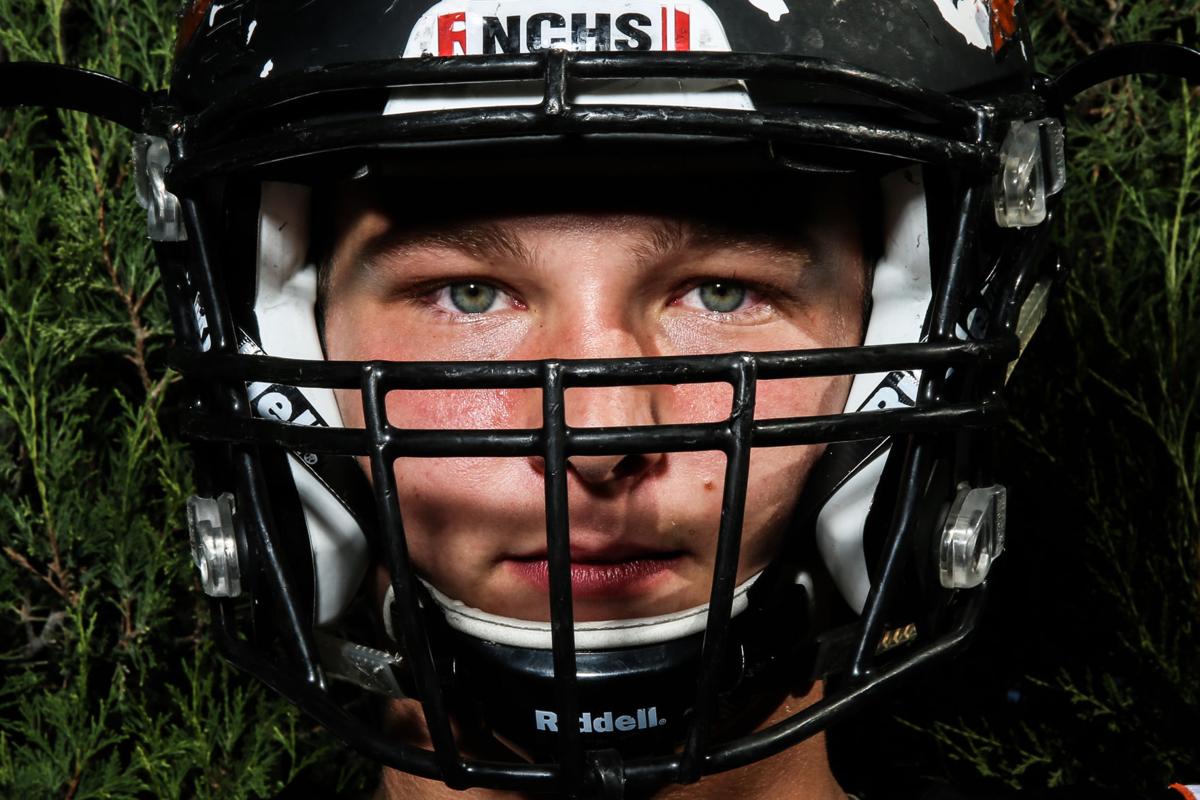 Natrona senior lineman David Schall poses for a portrait before practice on Tuesday at Cheney Alumni Field in Casper. 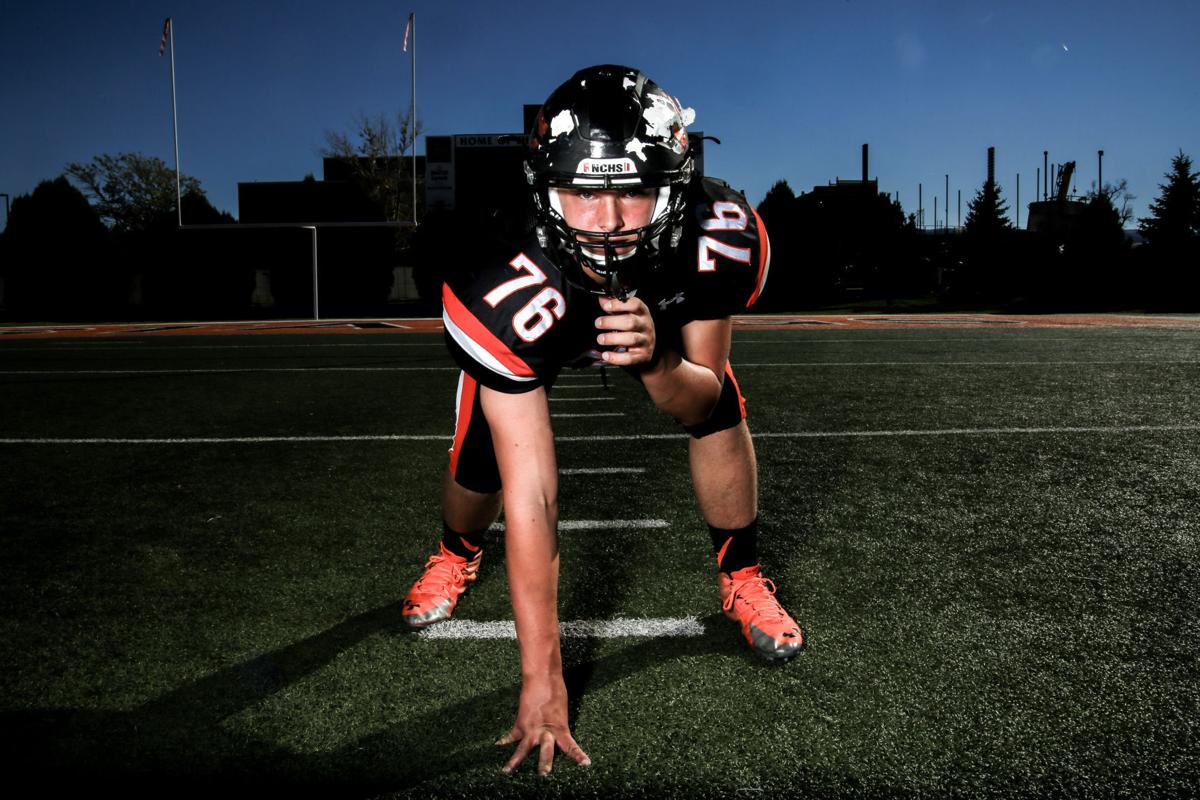 Natrona senior lineman David Schall takes his three-point stance for a portrait before practice on Tuesday at Cheney Alumni Field in Casper. 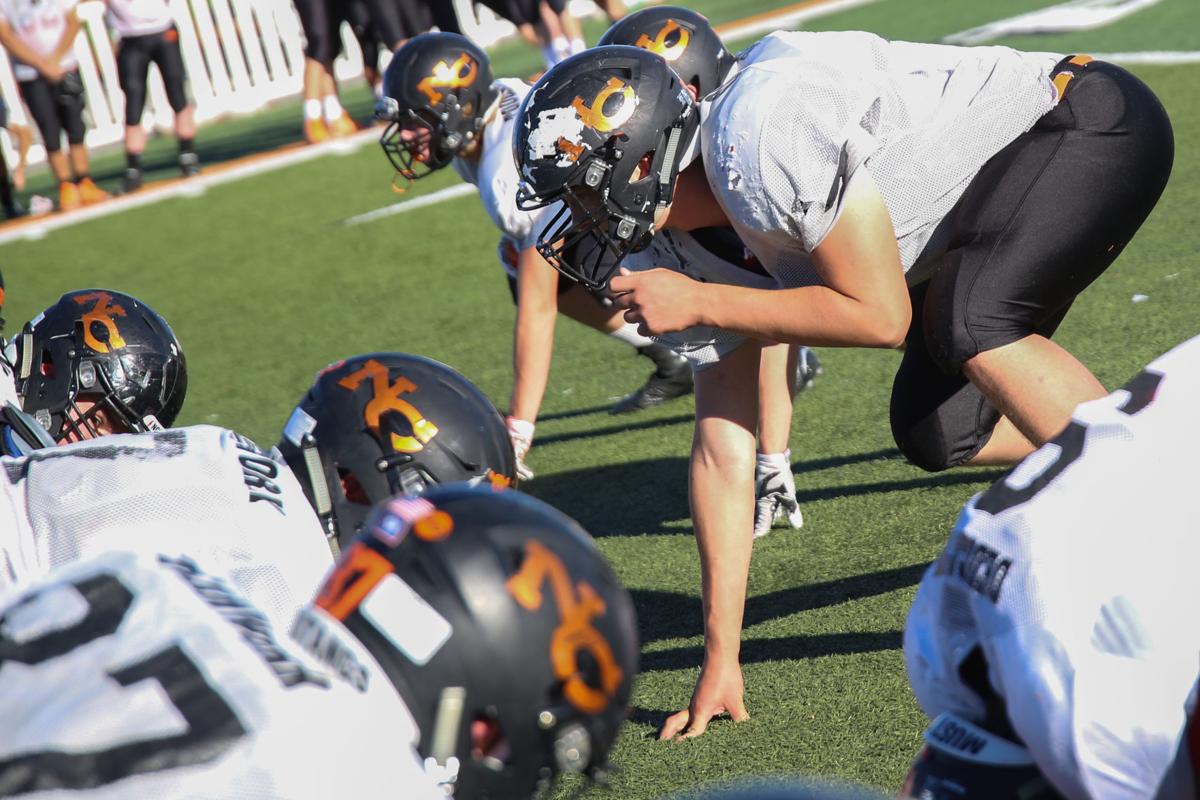 Natrona senior lineman David Schall takes part in a drill during practice on Tuesday at Cheney Alumni Field in Casper.

The words generosity, courage, fairness, integrity, and honor are inscribed into two rocks on the south end of Cheney Alumni Field — the home field for the Natrona football team.

David Schall stood next to one of those rocks Tuesday, his helmet so battered the ‘N’ on the ‘NC’ sticker has almost been completely torn off.

As a lineman, he doesn’t get the credit or praise other players might get, but his continued development is one reason the Mustangs enter Friday’s Oil Bowl against Kelly Walsh riding a three-game winning streak after starting the season 0-2.

The 6-foot-4, 235-pound Schall is the lone senior on the offensive line, playing alongside four sophomores.

Schall was forced to sit out the season opener against Cheyenne Central because he didn’t participate in enough fall practices. He couldn’t, because he wasn’t in Casper. He wasnt even in Wyoming.

While his teammates strapped on their helmets and laced up their cleats, Schall was in Fort Benning, Georgia, wearing combat boots.

In the Army (National Guard) now

“This summer I went to basic (training),” Schall said. “I started my dream.”

Back on Dec. 10th, Schall was sworn into the Wyoming Army National Guard. He became an infantryman in the C Company, 1st Battalion, 297th Infantry Regiment.

It was something he had been waiting most of his life for, and he couldn’t wait any longer.

“Ever since I was 3-years old I’ve always wanted to join the military,” Schall said.

With relatives and friends in the military, Schall could never get the thoughts of entering the armed forces out of his head.

Those who know Schall describe him as a generous and fair young man whose intentions of joining the military were well known to those around him.

“David’s an Oregon Trail (Elementary) kid and his mom and my wife teach out there so we’ve known him and his family for years,” Natrona coach Steve Harshman said. “He’s such a good kid, he’s such a nice kid. His whole family is just good, nice people.”

The soft-spoken Schall completed the 10 weeks of basic training at Fort Benning with flying colors. He had no problems going through inspections, his discipline was never in question and the conditioning from years of playing football prepared him for the fitness training.

Even the classroom portion in the first three weeks didn’t bother him.

Once settled in, he underwent the majority of his combat training. He had to perfect assembling and disassembling his M16 before moving on to marksmanship of targets at various distances and multiple targets simultaneously.

Schall said some of his football background helped in hand-to-hand combat, as he knew how to use his height and leverage to his advantage.

In the later weeks he spent most of his time involved in team training and leadership building. That included convoy operations and engaging targets with other infantrymen.

Even though the physical demands and fitness training grew tougher each week, Schall never backed down. The results were immediately apparent to Harshman when Schall finally rejoined the team.

“He wasn’t able to come to our summer camps but he was doing his own conditioning,” Harshman said. “I think he lost probably about 20 pounds, just lean and mean.”

Schall also had to undergo many more tests to prove he was ready and fit for the military. Again, he passed with flying colors.

By the end of the 10 weeks he had completed everything that was asked of him and came out tougher than he went in.

Back on the field

After the grueling two-and-a-half months in Georgia Schall returned to Casper for two weeks of football practices before school started.

There were some hiccups as a result of having missed summer workouts and multiple practices, but he had no problems asking his teammates for help on blocking schemes.

“He probably missed about 20 practices,” Harshman said. “So he was behind on some of that rep stuff, but he came back in great shape and ready to go.”

Back in familiar territory, Schall focused on school and football. He still carried some of the intensity from basic training, as evidenced by his scratched and scuffed helmet.

Not playing in the season opener didn’t help alleviate his intensity. When asked if having to sit out the first game bothered him, he cracked a big smile and said, “Oh, yeah”.

“When he came back, first day from boot camp, he just made that step from being a high school kid to being in the realm of manhood,” Harshman said. “The way he looked at you, posture, everything. It was totally different, in a good way.”

Just as basic training got tougher over the duration, the season has brought harder work each day.

“We’ve been practicing pretty hard now and conditioning a lot too, so that’s getting us in shape,” Schall said. “We’re also helping all the underclassmen (develop).”

While other senior linemen went down with injury, Schall managed to stay healthy. He combines some of the leadership skills he learned over the summer with the leadership that comes from being the only starting senior on the offensive line.

He’s been one of the key blockers for the improved running game that has allowed junior running back Brett Brenton to run for over 100 yards in three straight games, including 234 yards in last week’s win over Evanston. His pass blocking has given junior quarterback Jesse Harshman more time in the pocket.

“He’s really been catching a new gear,” Steve Harshman said. “I think it’s really starting to come together for him.”

All of his contributions have helped the Mustangs turn the season around.

“We’re doing a lot better now than we were at the beginning,” Schall said. “We’re starting to figure it out and get it together.”

Comfortable on the field once again, Schall is surrounded by supporters.

“Everybody’s supported him, no doubt,” Harshman said. “We’ve got his picture from camp in our program and that’s all-time one of the greatest program pictures ever.”

Schall is not flashy, he quietly goes onto the field and does his job.

Whether in the military or on the field, he falls in line.

Once the school year is over he’ll head back to Georgia to complete additional training.

“After I graduate this year I go back to Fort Benning,” he said. “I just have to finish up my OSUT training. It’s the rest of my infantry training.”

As for what comes after that, time will tell. Schall hasn’t decided what his next step will be in the military.

“Right now I just want to stay infantry, but I’m still seeing where this could take me,” he said. “National Guard covers college for me, too.”

For now, he focuses on football. There are a few more games left to play before he laces up his boots and rejoins C Company, 1st Battalion, 297th Infantry Regiment next summer.

He still has marching orders, but they don’t come from a sergeant — they come from a coach.

“It’s unique, you know,” Harshman said. “We’ve never had a guy do that before going into his senior year, so that’s pretty neat.”

For at least the next month, Schall will continue to play a sport he loves with his friends while the military is on the back burner.

“We’re just playing, having a good time, making sure we know what we’re doing, practicing harder,” he said. “Just having fun and hitting people.”

His camouflaged greens will stay tucked away in favor of his pads and helmet for a few more weeks. The mindset, however, doesn’t change much between his two passions.

Schall will continue to do what is asked of him on the football field because it’s his duty to his teammates.

No matter what uniform he’s wearing, Schall will serve with generosity, courage, fairness, integrity and honor.

ENLISTED: In December Schall was sworn in as a member of the Wyoming Army National Guard.

SLOW START: Schall missed the first weeks of fall practice because he was at basic training in Fort Benning, Georgia.

HE SAID IT: "He probably missed about 20 practices. So he was behind on some of that rep stuff, but he came back in great shape and ready to go." -- Natrona coach Steve Harshman.

The 2020 graduate was set to be an equipment manager this season before UW coaches chose to bring him in as a walk-on fullback.

Dee Harrison will be the new head football coach at St. Stephens. The hiring was first reported by wyoming-football.com earlier this week.

Natrona senior lineman David Schall poses for a portrait before practice on Tuesday at Cheney Alumni Field in Casper.

Natrona senior lineman David Schall takes his three-point stance for a portrait before practice on Tuesday at Cheney Alumni Field in Casper.

Natrona senior lineman David Schall takes part in a drill during practice on Tuesday at Cheney Alumni Field in Casper.