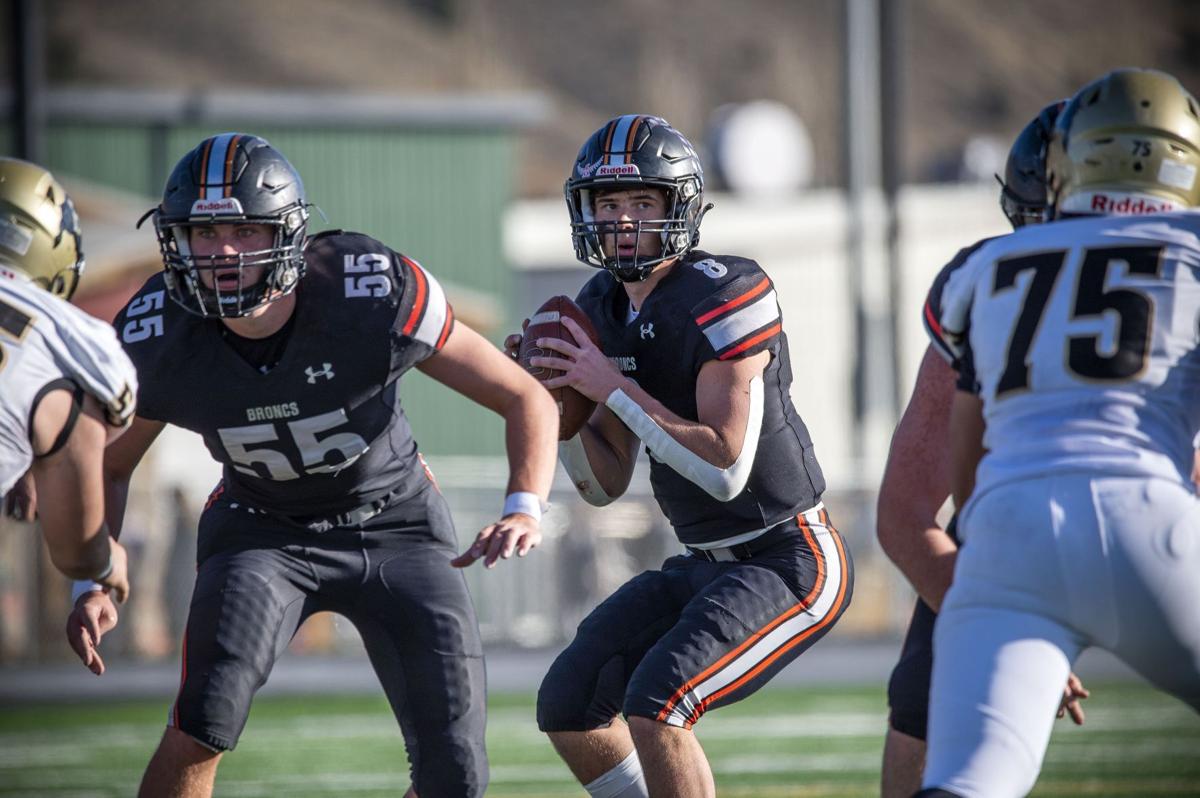 Jackson quarterback Sadler Smith drops back to pass behind the protection of Will Pew during the Broncs' Class 3A quarterfinal victory over Buffalo on Oct. 29 at William T. McIntosh Stadium in Jackson. 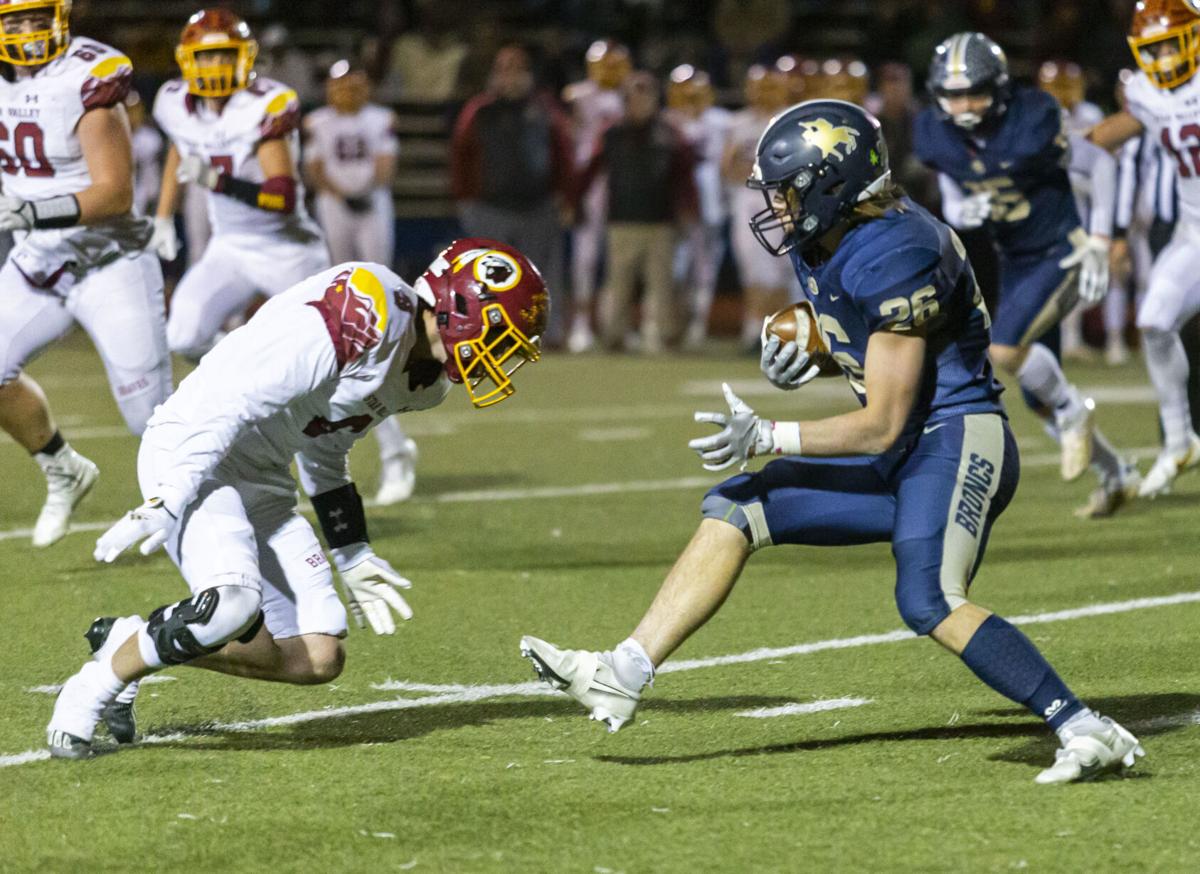 Cody's Jackson Schroeder tries to avoid a Star Valley defender during their Class 3A semifinal game Nov. 5 at Spike Vannoy Field in Cody.

Since losing its first 10 games under head coach David Joyce, Jackson has established itself as one of the best teams in a loaded Class 3A West Conference. Following that 0-10 start that ended in the second game of the 2018 season, the Broncs have gone 34-11, including a 6-3 record in the playoffs.

More impressively, Jackson is 4-0 against Powell and 2-2 against Star Valley, winning the last two games.

Now the Broncs just have to figure out a way to knock off defending state champ Cody, which is 4-1 versus Jackson the last three years. That includes a 34-15 victory in last year’s state title game in Cody. The Broncs (Cody version) have won four in a row in the series, including a 21-15 victory three weeks ago courtesy of a last-minute touchdown pass.

Jackson (9-2) will try to reverse its fortunes against Cody when the two meet Friday for the Wyoming State High School Class 3A Championship.

“We’re going to have to play extremely clean football and execute better on offense,” Joyce said. “I think one team is going to get a big play on special teams, and hopefully that will be us and give us some momentum.”

Jackson isn’t as prolific in the run game as it has been the past three years, but senior Brody Hasenack played through injuries to rush for 1,260 yards and 20 touchdowns. Senior quarterback Sadler Smith has added 523 yards on the ground and thrown for a 3A-best 2,733 yards. His primary targets have been Nate Keipert (55 receptions for 954 yards and 5 TDs), Colter Dawson (44 for 769 yards and 5 TDs) and Clancy Meagher (15 for 149 and 5 TDs).

“They’re a big-play offense so we’ve got to be able to contain them and make them put together 14-play drives,” Cody head coach Matt McFadden said. “Sadler is a great quarterback, but he’s also an amazing running back. We have to contain the bleeding and not give up big plays.”

Cody (10-0) counters with a defense that is allowing just 226.7 yards per game. The Broncs also have 67 tackles for loss and 42 sacks, with Daniel Gorman, Grayson Beaudrie, Jace Grant and Danny Becker doing most of the damage. The four have combined for 35 TFL and 25 sacks.

“We have to stop their run game,” Joyce said. “I don’t think we can stop them completely, just like I don’t think they can stop us completely. So it’s more managing it and controlling it and playing better in certain spots when they get to certain areas of the field.

“We have to force them to beat us in a different phase of the game.”

Dawson, who leads 3A with 21.2 defensive points per game, anchors a defense that allows just 104.0 rushing yards per game.

“Their defense makes you earn it,” McFadden said. “Both teams have a lot of the same type of weapons. So for us it’s going to take all of our guys. We’ve got to win one-on-one matchups and continue to move the ball. We have to be able to stay on track.”

With the teams evenly matched across the board, turnovers and special teams play could be deciding factors. Jackson will be looking to avoid the mistakes it make in last year’s championship game when it turned the ball over four times in the first half.

“We can’t beat ourselves,” Smith said. “Cody plays really sound football and they don’t make a lot of mistakes. We have to win the turnover battle and do what Jackson football does and not let the momentum get too big for us.”

Jackson, which last won a state title in 2007, is making its first appearance at War Memorial Stadium. Cody is 2-1 at The War, winning championships in 2014 and ’17.

INSIDE: Class 2A preview. Page B2

Jackson quarterback Sadler Smith drops back to pass behind the protection of Will Pew during the Broncs' Class 3A quarterfinal victory over Buffalo on Oct. 29 at William T. McIntosh Stadium in Jackson.

Cody's Jackson Schroeder tries to avoid a Star Valley defender during their Class 3A semifinal game Nov. 5 at Spike Vannoy Field in Cody.