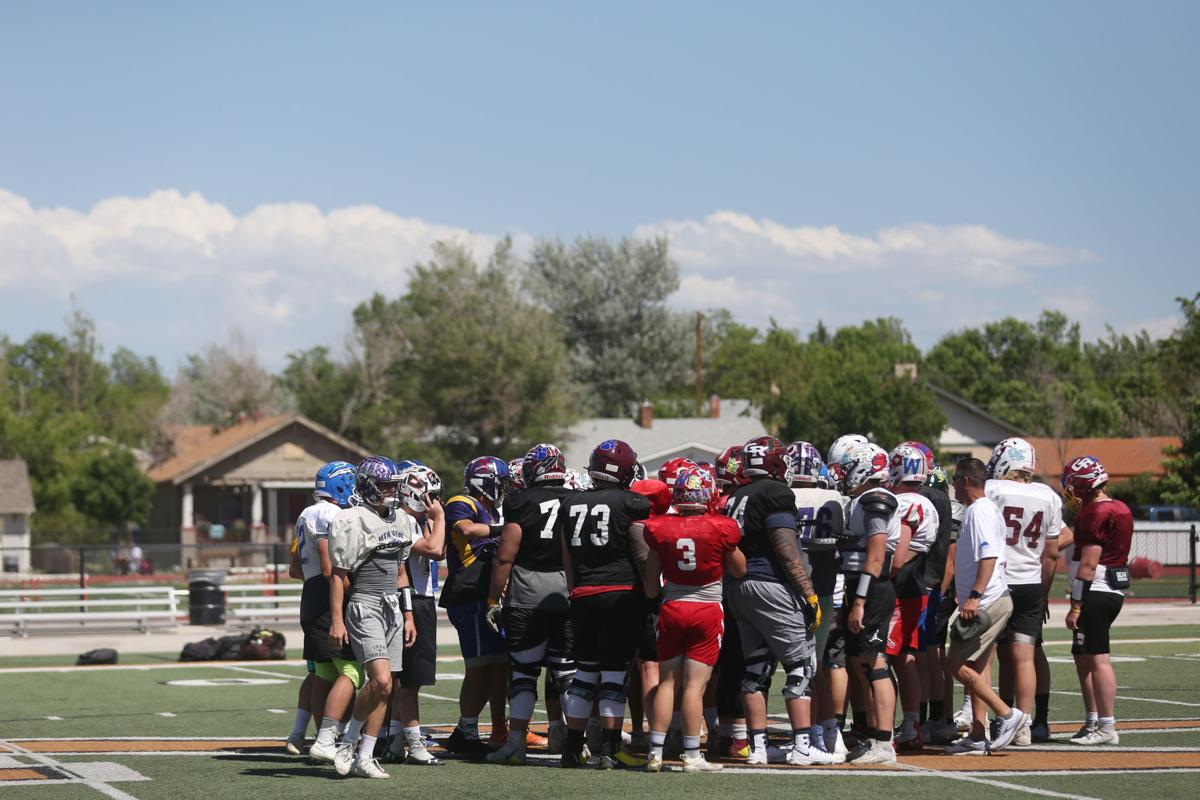 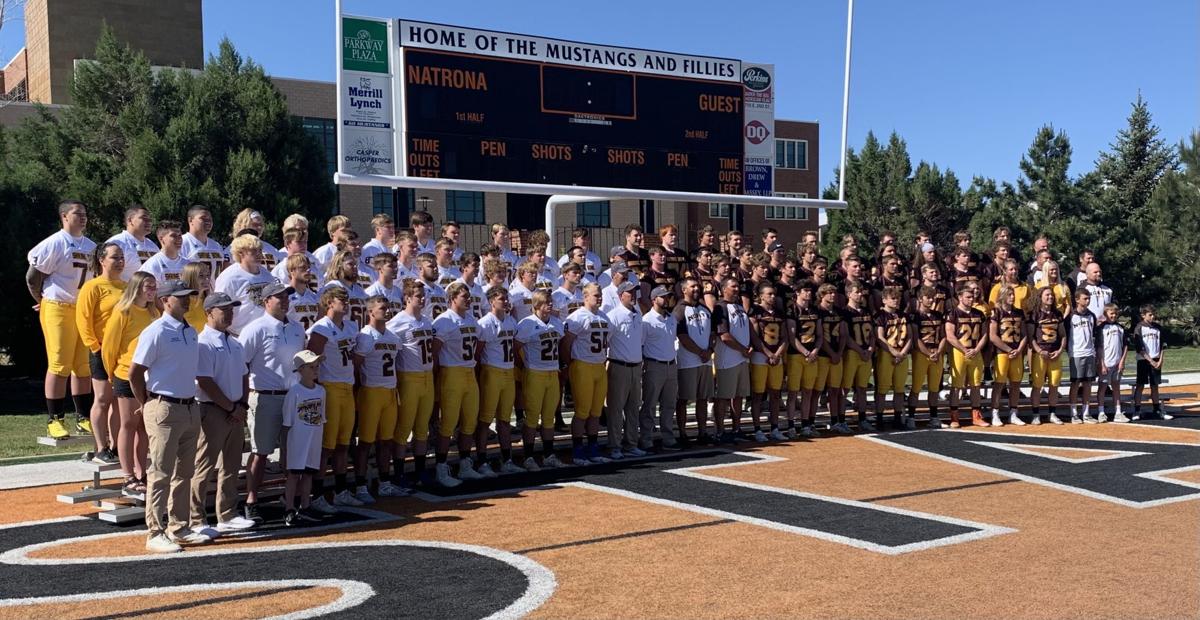 Players and coaches for the 2021 Shrine Bowl pose for a photo during media day Friday at Cheney Alumni Field in Casper.

The annual Shrine Bowl, which brings together 72 of the state’s best senior football players, has always been more than just a game. The game is the culmination of a week’s worth of practices and a series of team-bonding activities, but making sure the players don’t forget the actual reason for playing the game is paramount.

All proceeds from this year’s game, which is scheduled for 2 p.m. Saturday at Natrona County’s Cheney Alumni Field, benefit Shriners Hospital for Children in Salt Lake City.

“We provide orthopedic care up to age 18 for families regardless of their ability to pay,” Nancy Wiscomb, the event coordinator for Shriners Hospital in Salt Lake City, said at Friday’s media day in Casper. “This game has raised $757,000 over the years. Last year, even without a game, we got $3,000, which was amazing.”

Last year’s Shrine Bowl, like most other summer high school events, was canceled because of the coronavirus pandemic. And while this year’s Shrine Bowl is a full-go, there was one noticeable change to the activities leading up to the game — the players and coaches wouldn’t be making the trip to Salt Lake City to visit the Shriners Hospital for Children. The trip to Salt Lake City allows players to see the young patients up close and personal and helps them to develop a better understanding of the hardships the patients are likely to face going forward.

“I heard from my father and from other relatives who played in the Shrine Bowl that the highlight of the whole week was going down to Salt Lake,” said Lovell’s C.J. Lindsay, who will play for the North. “And when we found out that wasn’t happening this year it was a huge disappointment.

“But we got to meet multiple youth that have benefited from the Shriners Hospital, so they’ve still done a really good job of showing us what it’s all for.”

North head coach Matt McFadden (Cody) and South head coach Brent Walk (Mountain View) have both coached in the Shrine Bowl before. So they had firsthand experience of the impact the visit to the Shriners Hospital had on the players. Forced to do without that this year, both have taken time to remind the players throughout the week of why the Shrine Bowl matters.

Based on how the players have responded, the message has gotten through.

Walk, who ends his South practices with messages for the players — “Do the right thing in every situation.” “Always show people you care.” “Good things happen to good people.” — found that out during the annual Casino Night on Thursday. Players collected chips throughout the night and at the end had a chance to bid on donated items during a live auction.

“I’ve been coaching for 29 years and what happened last night was one of the coolest things I’ve ever seen,” Walk said. “All the guys got together and pooled all their chips and donated everything back to the Shriners Hospital.”

Cheyenne East graduate Dakota Heckman wasn’t sure who came up with the initial idea, although he believes the Maiava triplets — Micah, Matthew and Michael from Laramie — might have been responsible.

“It started rolling and it just kept getting bigger and bigger,” Heckman explained. “We just knew that we were getting stuff for those kids. We won the big fluffy bunny and that was awesome because we knew it was going to make some kid happy.

“Obviously we’re here to play a football game, but the cause is much bigger than football. It’s a good opportunity for us to come out here and help kids that can’t play the game because they’re not as fortunate as we are.”

John Bouzis, who played in the Shrine Bowl in 1977 and currently serves as the Director of Football Operations for Shrine Bowl of Wyoming, was at Casino Night and witnessed what the South team did.

“I’m very proud of these kids because they do understand why they’re here,” he said.

Bouzis credits McFadden and Walk and their coaching staffs with instilling that sense of understanding in the players.

“One of the first things the coaches did is they sat down with the players,” he said. “They told them, ‘This is why we play the game. We play this game for the kids.’”

Lindsay, who was an all-state football player and state track champion for the Bulldogs, knows how fortunate he and the rest of the players in Casper this week are. He’s obviously excited for Saturday’s game, but the Shrine Bowl itself takes a backseat to the real reason the game is taking place. And while they didn’t get to make the trip to Salt Lake City, he credits the Shriners for allowing them to meet some local patients who have had to spend time at the Shriners Hospital.

“Yeah, it’s an all-star football game,” he said, “but it’s so much more than that. It’s for these kids who will probably never have the opportunity to do what we get to do every day of our lives. But we got to see them and to know that we have some small role in helping them have as normal a life as possible is very rewarding and very humbling.”

MORE THAN A GAME: Over the years, the Wyoming Shrine Bowl has raised more than $750,000 for Shriners Hospital for Children -- Salt Lake City.

HE SAID IT: “Obviously we’re here to play a football game, but the cause is much bigger than football. It’s a good opportunity for us to come out here and help kids that can’t play the game because they’re not as fortunate as we are.” -- Cheyenne East Dakota Heckman.

NBA Finals: What is the best result for the books?

Should there be concern around the Yankees?

Should there be concern around the Yankees?

Graedyn Buell threw for 310 yards and two TDs and ran for one score to earn Offensive MVP honors.

Notes and numbers for the 2021 Shrine Bowl

Notes and numbers for the 2021 Shrine Bowl

North, South teams working to find a rhythm ahead of Saturday's Shrine Bowl

Some players knew what position they would play when they arrived, while others had to wait until after a few practices to find out.

During the regular season, there’s no love lost between Cody and Powell when the two Class 3A rivals meet on the gridiron. The same could be s…

Farson's Parker Clawson scored both of Wyoming's TDs in 48-14 loss.

Players and coaches for the 2021 Shrine Bowl pose for a photo during media day Friday at Cheney Alumni Field in Casper.