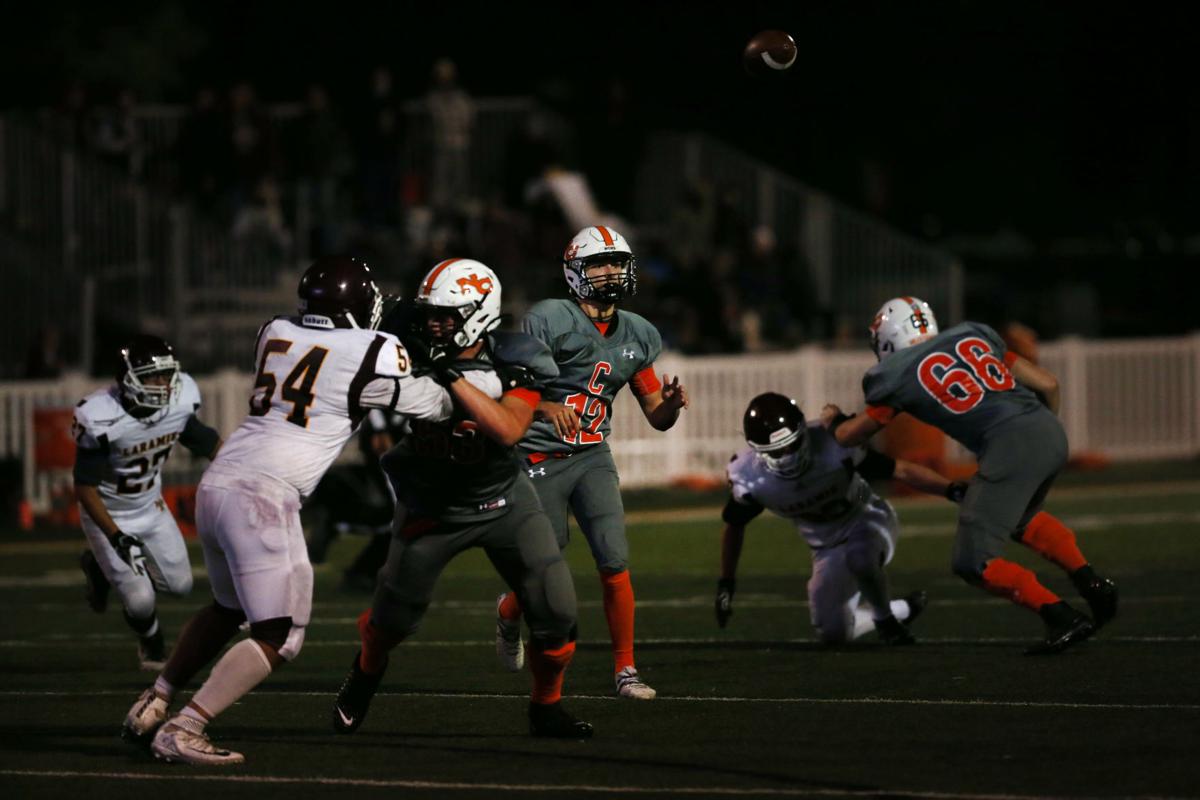 Natrona County quarterback Harrison Taubert throws a pass in the Mustangs' game against Laramie on Friday at Cheney Alumni Field in Casper. 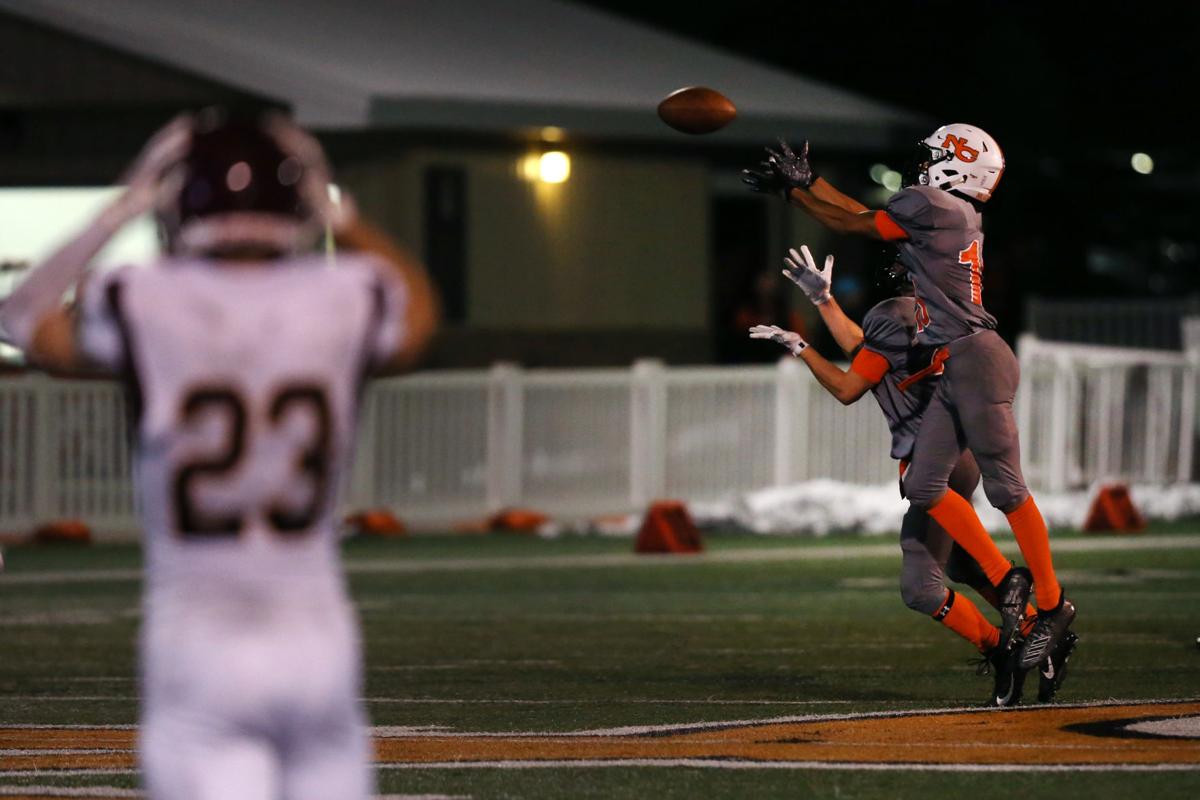 Natrona County's Avery Cox (11) and Koby Kelly go for an interception in the Mustangs' victory against Laramie on Friday at Cheney Alumni Field in Casper.

Steve Harshman was waiting for it.

Natrona County’s coach watched his team fight uphill battles in its first two games of the season — a position the Mustangs played as much a part of putting themselves in as did their opponents. Natrona County was competitive against Cheyenne Central and Cheyenne East, Class 4A semifinalists last year that are off to a combined 5-1 start this fall, but slow starts and too many self-inflicted miscues ultimately doomed the Mustangs.

Natrona County rallied from a 14-0 halftime deficit against Central in its opener to take the lead at one point, but four turnovers, including a pick-six in the final minutes, were too much to overcome in a 35-21 loss. The Mustangs mounted another second-half rally the next week at Cheyenne East, but Harrison Taubert was intercepted in the end zone on the final play of a 34-27 setback.

“We were right there in both of those first two games,” Harshman said. “Had our chances to win them. Played them even.”

The third time proved to be the charm for Natrona County.

Back at Cheney Alumni Field on Friday, the Mustangs put together a nearly flawless performance in a 48-21 win over Laramie. With execution so efficient that Taubert had the luxury of watching the second half from the Mustangs’ sideline, Natrona County led 41-0 at the half and didn’t punt until late in the third quarter.

“It gives us confidence,” Taubert said. “I think we were confident Week 1, but of course winning gives you more confidence.”

The Mustangs were up 21-0 before many of those in attendance had a chance to get settled into their seats. Taubert was in the end zone 11 plays into the game on an 8-yard run. The Mustangs only needed nine plays to score on their second possession, which their senior quarterback capped with a 5-yard run.

Natrona County was gifted prime field position for its next possession when Laramie’s Travis Judd fumbled the ensuing kickoff while trying to catch it, and the Mustangs’ lead was 21-0 late in the first quarter when Taubert connected with Avery Cox from 25 yards out on the next play.

Taubert was 8 of 11 passing for 148 yards and two scores. He rushed 12 times for 98 yards and three more touchdowns before calling it a night with the Mustangs up 41-0 at the half. Senior running back Braxton Bundy also did some heavy first-half lifting with 14 carries for 97 yards, including a 14-yard touchdown.

Meanwhile, Natrona County’s defense forced a punt or a turnover on Laramie’s first four possessions. The Plainsmen didn’t get on the board until Isaac Sell’s 5-yard touchdown run with 8 minutes, 9 seconds left in the third quarter.

And it was easily the cleanest game Natrona County has played so far. The Mustangs were only flagged for a handful of penalties, and they didn’t turn the ball over, at least not their starters. A fumble early in the fourth quarter when many of its backups were in the game was the only time Natrona County coughed it up. The Mustangs finished plus-3 in the turnover battle.

“That’s the key stat in football, right?” Harshman said. “We’ve been on the short end of that deal. It’s tough to win games when you’re turning it over.”

Even with the Mustangs reaching further down the depth chart in the final two quarters, Harshman wasn’t crazy about the way his team finished. Natrona County was outscored 21-7 the final 20 minutes and change of game time.

It was about the only complaint the Mustangs’ veteran coach had about his team’s otherwise dominant showing. Harshman is confident in his team, and he figured it was only a matter of time until the Mustangs naturally progressed as most teams do over the course of a season.

But in Harshman’s opinion, Friday’s performance was also evidence that his players are finally starting to gel on the field following an offseason that interrupted team chemistry not only because of the coronavirus pandemic but also some personnel losses.

“Some teams come together really fast,” Harshman said. “We really had no summer activities, and it affected us I think. And we lost a couple of our key vocal kind of leaders who’ve moved away to other states with jobs with their parents. I think it affected us early, and I think it’s finding that team thing. It takes a little time to build that sometimes, longer than you’d like.”

“I think we’re getting better all the way around,” Harshman said. “It’s a total team thing. Every player, every coach, everybody. We’re just getting better.”

Turnovers played as big a part as anything in deciding a winner between a pair of Class 4A playoff teams from last season.

Natrona County quarterback Harrison Taubert throws a pass in the Mustangs' game against Laramie on Friday at Cheney Alumni Field in Casper.

Natrona County's Avery Cox (11) and Koby Kelly go for an interception in the Mustangs' victory against Laramie on Friday at Cheney Alumni Field in Casper.