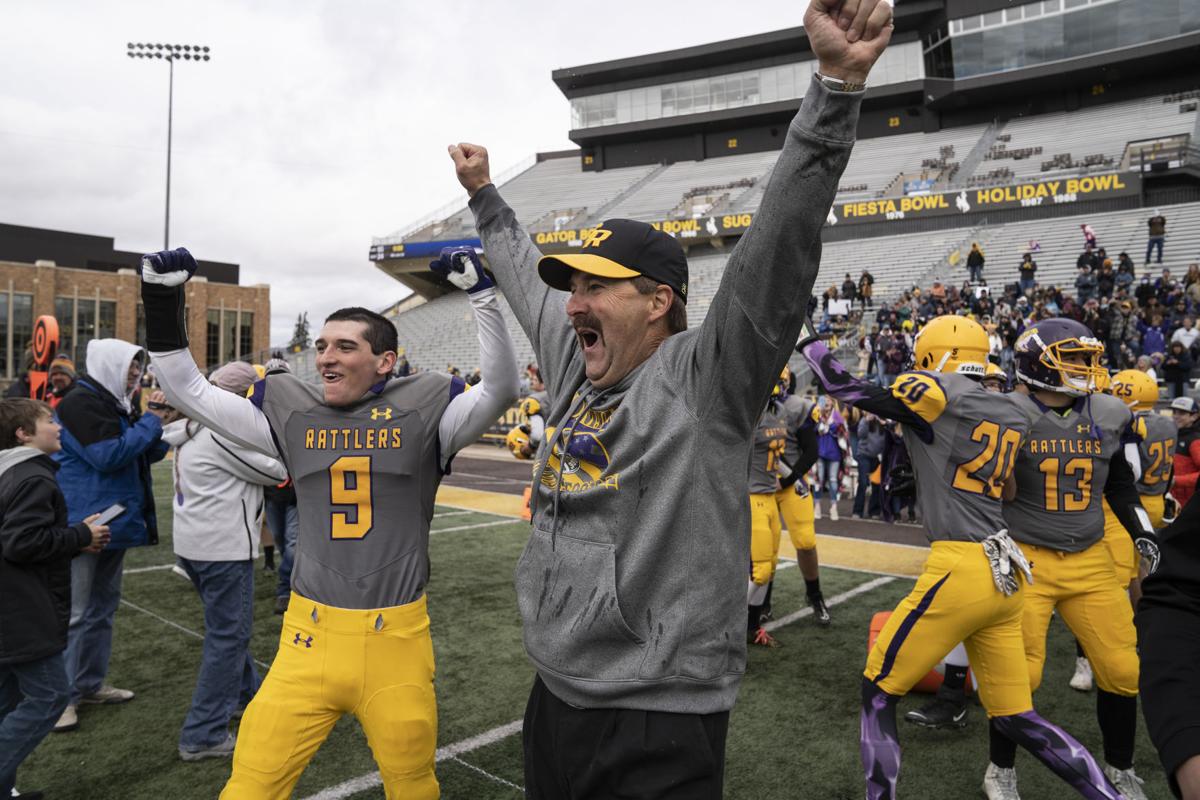 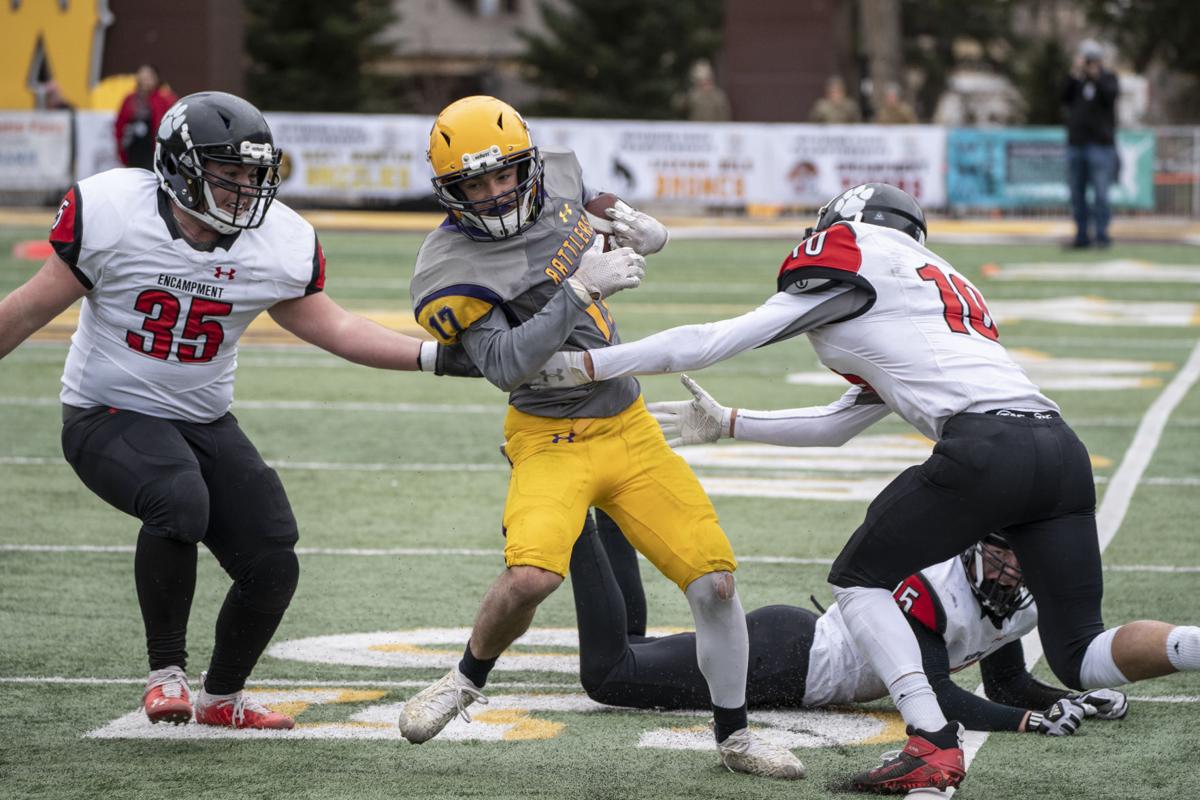 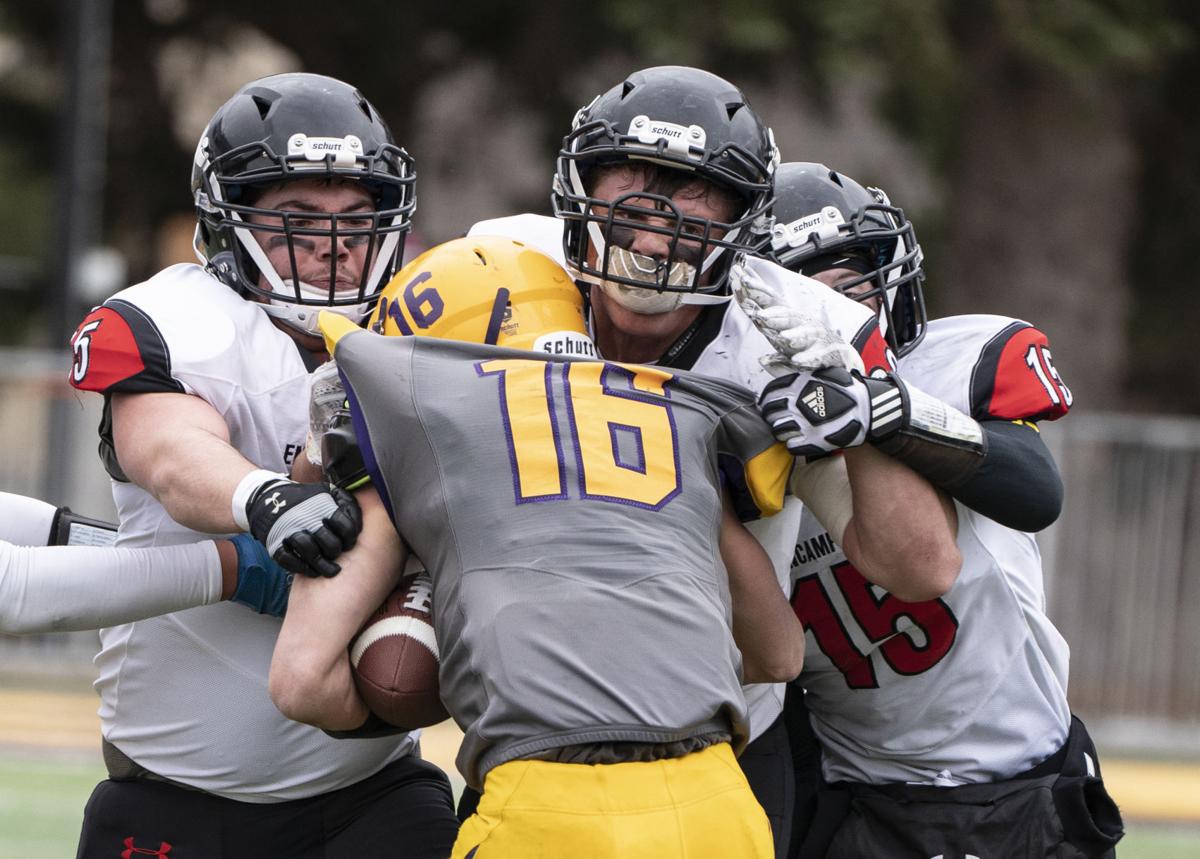 LARAMIE — For the second time in three years, and the fourth time in the past 11, Snake River capped a perfect season with a dominating performance at War Memorial Stadium. The Rattlers (10-0) scored 22 consecutive points to open the second quarter to erase an 8-7 deficit and rolled to a 65-24 victory over Encampment in the Wyoming High School Class 1A/6-man Championship game on Friday.

“This is a dream come true for me,” Snake River head coach Jack Cobb said. “For a kid to grow up in Snake River and never have football and to be able to do it two out of three years? You can’t beat that.”

Peroulis and Myers watched from the sidelines as the Rattlers hoisted the 2019 championship trophy. And both missed time this season because of injuries. All that made Friday’s victory even sweeter.

“When I got hurt I was scared,” admitted Myers, who was injured early in the season, “but I knew our team would work hard and they would prosper. They dominated without me in there so I knew I could take my time and not rush back. When I came back I knew it would be the right time.”

Myers, who finished with 159 yards rushing as well as completing a 36-yard pass to set up a touchdown, returned in time for the Rattlers’ playoff run.

“When we didn’t have Hadley for six weeks it was tough,” Cobb said. “But we played as a team and everybody stepped up their game. To get him back for this stretch run is a happy ending for Rattler football.”

The timing of Myers’ return was was perfect as Peroulis suffered a pinched nerve in his shoulder late in the season and played sparingly in Snake River’s first two playoff games.

He came back in a big way in the championship game. His 8-yard touchdown run gave the Rattlers the lead for good at 13-8 early in the second quarter. He broke free for a 50-yard scoring run on the Rattlers’ next possession and capped Snake River’s first-half scoring with a 15-yard touchdown run.

“I didn’t play much in the first two playoff games because of my shoulder,” Peroulis said, “but this game I just decided to push through it as hard as it hurt.”

Snake River struck first when Zane Matheson’s pass downfield bounced off an Encampment defender and dropped into Jeric Martinez’s hands at the 2-yard line. Martinez fell into the end zone. Myers completed a pass to Wyatt Adams for the one-point conversion and a 7-0 lead with 7 minutes, 2 seconds remaining in the first quarter.

The lead didn’t last long, though, as Caysen Barkhurst returned the ensuing kickoff 55 yards for a touchdown. Michael Anderson’s extra-point kick gave the Tigers the 8-7 lead.

That’s when Peroulis went to work. After not carrying the ball in the opening 10 minutes, the junior scored on back-to-back possessions to give the Rattlers the 21-8 advantage.

Two plays later, Seth Maxson stepped in front of a Pickett pass and returned it 31 yards for the pick-six.

Encampment scored the final points of the first half on a safety to trail 35-16 at the intermission. Pickett and Gilbert made it 35-24 on the Tigers’ second possession of the third quarter when they hooked up for a 53-yard catch-and-run.

Unfortunately for the Tigers, who were playing in the program’s first state championship game, that was all their scoring for the day. Encampment finished with just 244 yards of total offense and just 115 in the second half.

“Yeah, 6-man is a wild game with offense, but honestly defense still wins championships,” Cobb said. “Defense is not about individuals, it’s about a team believing in each other.”

Pickett, who finished 14-of-30 for 219 yards and the two TD passes to Gilbert, also was picked off four times.

With Encampment unable to generate much offensively in the second half, Snake River put the game out of reach by giving the ball to Myers. He had touchdown runs of 9, 17 and 30 yards to help the Rattlers extend the lead to 59-24. Risner put the finishing touches on the victory with a 33-yard scoring run.

“This feels 100 percent better than two years ago,” Peroulis said. “I’ve always wanted to hold that trophy and know that I was a part of a team that won a state championship. It feels so good.”

GETTING DEFENSIVE: Snake River shut out Encampment over the final 16-plus minutes to win their second title in three years.