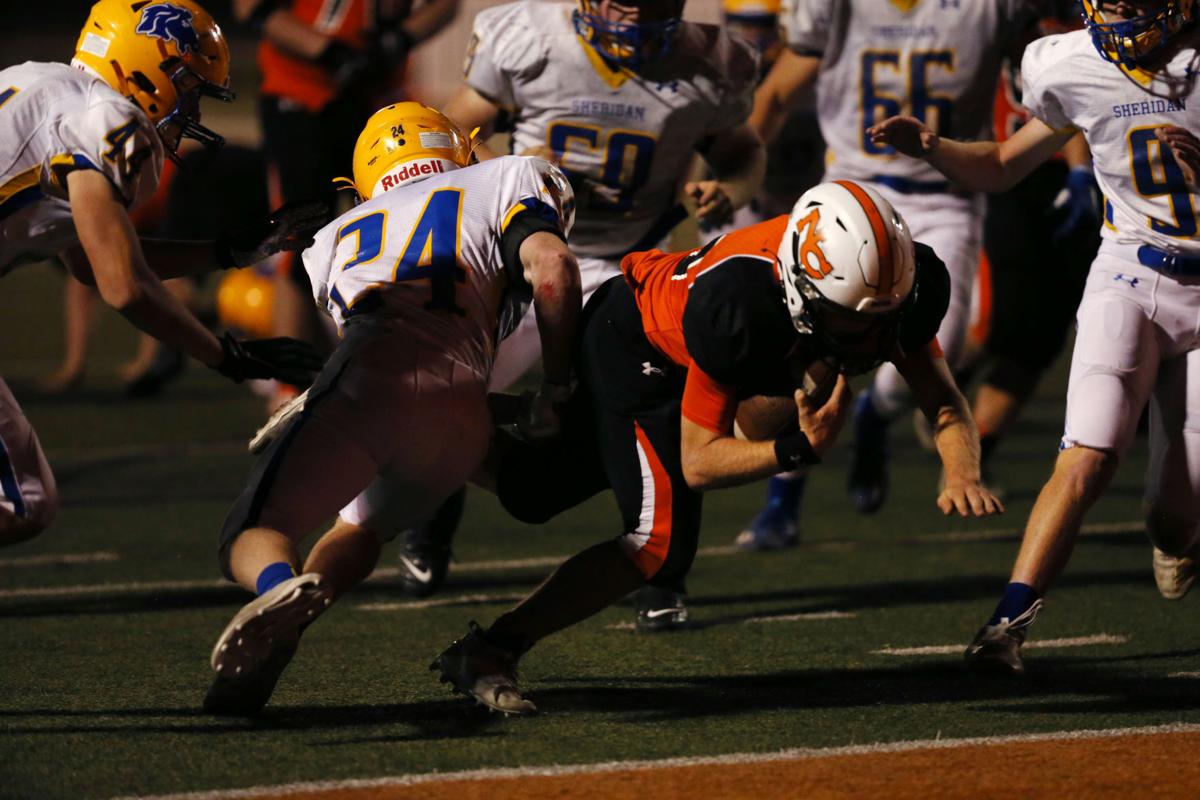 Natrona County quarterback Tyler Hill pushes for a touchdown in overtime against Sheridan on Oct. 2 at Cheney Alumni Field in Casper. 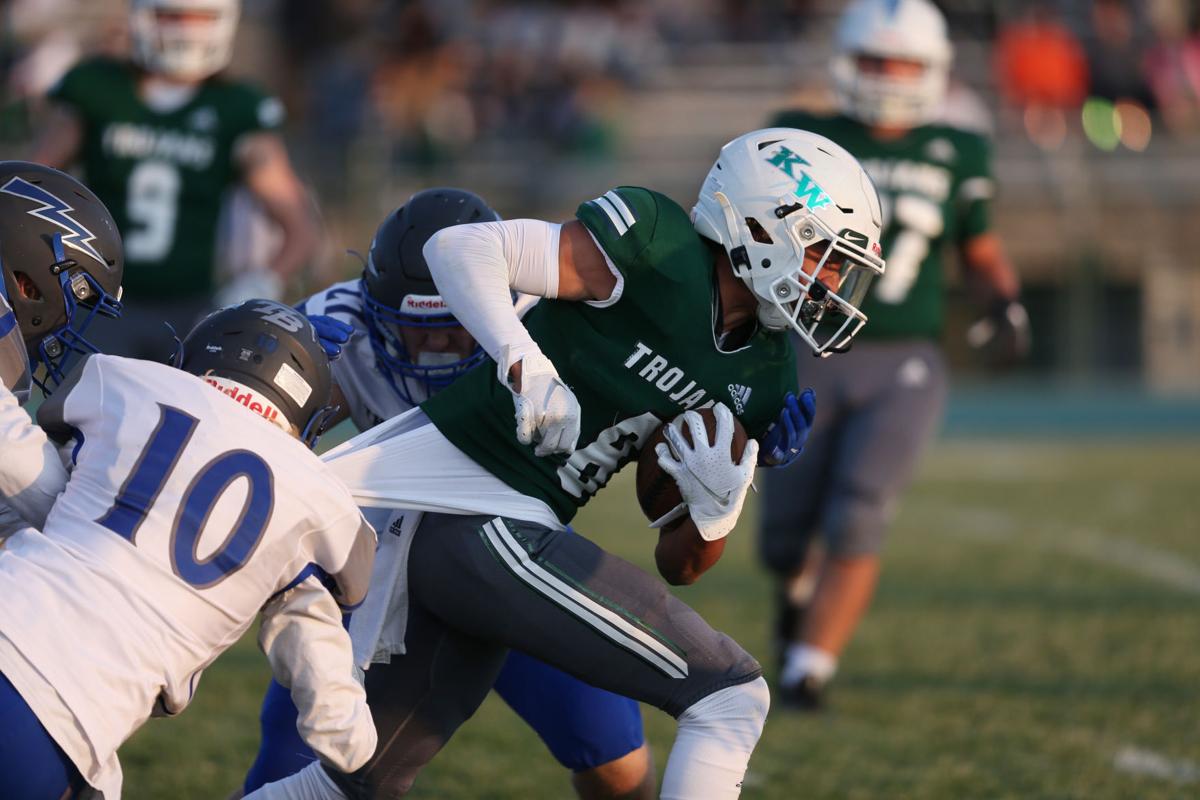 Kelly Walsh's Esaias Spillane is swarmed by the Thunder Basin defense during their game Oct. 2 at Harry Geldien Stadium in Casper. 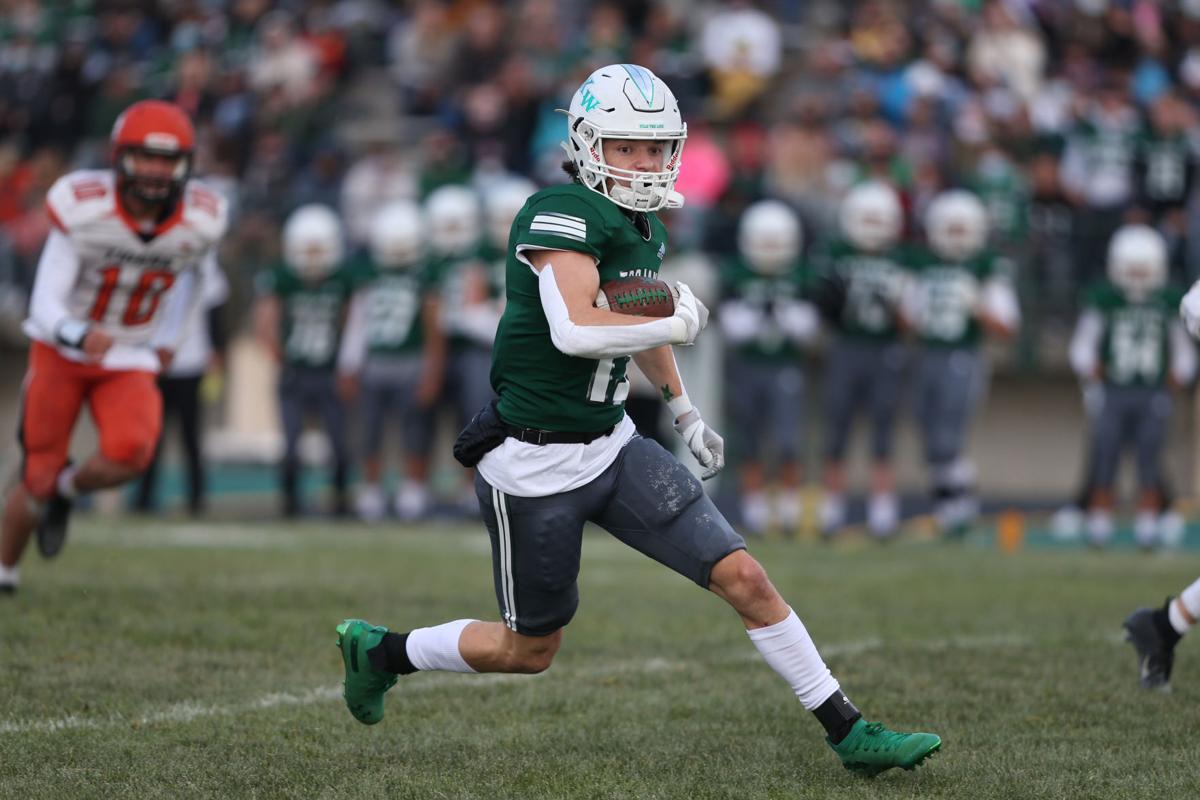 Kelly Walsh receiver Dom Jahr runs for yardage after catching a pass against Rock Springs on Sept. 11 at Harry Geldien Stadium in Casper.

The 2020 high school football season was already destined to be one for the record books.

The addition of 9-man football – for the first time since 1994 – to replace Class 1A/11-man was cause for excitement. The movement of teams into new classifications also figured to be something to keep an eye on. And with teams not allowed to hold spring practices because of the coronavirus pandemic, which also limited the number of teams that could conduct summer camps, there were bound to be some surprises early in the season.

Five weeks later, those games aren’t the outliers they appeared to be at the time.

“All the years I’ve coached I’ve never seen this many good teams,” said Mountain View head coach Brent Walk, who is in his ninth year leading the Buffalos. “It definitely makes things interesting.”

With just three weeks remaining in the regular season, only seven teams have secured a spot in the playoffs. More surprisingly, every team remains alive for the postseason.

Here’s a closer look at each of the classifications heading into Week 6.

Cheyenne Central has established itself as the team to beat, although both Cheyenne East and Thunder Basin are right on Central’s heels.

The Indians could all but clinch the top seed, and home-field advantage throughout the playoffs, with a victory over East on Friday. But a Thunderbirds’ victory, combined with a Bolts’ win over Laramie, would result in a three-way tie at the top of the standings.

An East victory would also leave all three with 1-1 records against each other.

“There is just a ton of parity in 4A this season,” Rock Springs head coach Mark Lenhardt said.

Friday presents a chance for separation as Natrona County plays at 1-5 Gillette and Rock Springs is at 0-6 Cheyenne South. Kelly Walsh hosts defending state champ Sheridan looking to snap a 15-game losing streak to the Broncs.

“It’s a great opportunity for us to say, ‘Hey, we want a seat at the big kids’ table on Thanksgiving, not downstairs with the little kids where we’ve been,’” Kelly Walsh head coach Aaron Makelky stated.

While Central, East and Thunder Basin are in prime position to host playoff games, the No. 4 seed also hosts a quarterfinal game. The schedule favors Natrona County, which hosts Thunder Basin in Week 7 and finishes at Cheyenne South. Sheridan closes with home games against Gillette and Thunder Basin while Rock Springs finishes at Central and with a home game against East. Kelly Walsh finishes with road games at East and Gillette.

“If we take care of business we’re in position to have a home playoff game,” Makelky acknowledged. “We’re not there yet, but this is an opportunity, especially against a team like Sheridan that is the gold standard, which is what they put on their T-shirts.

“There’s always room for improvement,” he added, “but we’re within striking distance and we control our own destiny.”

FIGHTING FOR A SPOT

Laramie (1-5) currently has the upper hand in the race for the eighth and final playoff spot thanks to a victory over Gillette in Week 1. The Plainsmen also host South next week and a win there should be enough to secure their postseason spot.

With each team in both the East and West conferences having played only two games, nothing has been decided yet. Still, Douglas in the East and Cody and Jackson in the West are all unbeaten in conference play and should be playing beyond Week 8.

At this point, the big storyline is that two-time defending state champion Star Valley, which is 1-5 overall and 0-2 in the West, is in danger of missing the postseason for the first time since 2-8. The Braves’ playoff push begins Friday when they host top-ranked Cody.

No classification better illustrates the craziness of the 2020 season than this one.

It started in Week 1 and the roller coaster ride hasn’t stopped. Six different teams have occupied the top spot in the Star-Tribune Power Poll and there could be another change this weekend as No. 1 Mountain View (4-0 in the West) hosts former No. 1 Big Piney (3-1) in a big West Conference showdown.

“Every single game is like a playoff game,” Walk said. “We can’t get ahead of ourselves, but we are in a good spot right now.”

The Buffalos would clinch a playoff berth with a win Friday. It might be the longest they have had to wait to secure a spot in the postseason in years. Last season Mountain View won every conference game by at least 35 points and its starters rarely played in the second half. This year the Buffalos won their first two conference games by three and 10 points, respectively.

“We have had to grind out wins,” Walk admitted. “And I expect that to be the case for the rest of the season.”

Along with Mountain View and Big Piney, Lyman (3-1), Cokeville (2-2) and Lovell (2-2) are the best bets to make the playoffs, although only four of the five will actually do so. Then again, Thermopolis (1-3), Pinedale (1-3) and even Kemmerer (0-4) could still factor into the mix.

The same kind of situation exists in the East Conference, where Wheatland, Upton-Sundance, Torrington and Big Horn are all tied at 3-1.

“Everything is still up for grabs,” Big Horn head coach Kirk McLaughlin said. “We have a chance to win the conference or we might miss the playoffs altogether.”

Not surprisingly, each of the losses by the four teams at the top have all come against each other. Big Horn lost to Wheatland in Week 2 but defeated Torrington last week. In Week 3 Wheatland lost to Upton-Sundance, which lost at Torrington the following week.

The East winner likely won’t be decided until the final two weeks when Torrington hosts Wheatland and Big Horn plays at Upton-Sundance.

“Everything is still up for grabs,” McLaughlin said.

The Grizzlies were the first team to clinch a playoff berth, doing so in Week 3 in the West, which was reduced to five teams after both Wyoming Indian and St. Stephens opted out of the season because of COVID-19 concerns on the Wind River Reservation.

Behind one of the state’s best rushing attacks, the Tigers (4-0) will be making their first playoff appearance since going to three consecutive state championship games (2012-14).

In the West, Shoshoni (1-1), Riverside (1-1) and Wind River (1-2) have the inside track to filling out the playoff field, although Greybull (0-2) would make things interesting if it can knock off either the Wranglers or the Rebels to close the season.

In the East, top-ranked Southeast (3-0) could clinch a playoff berth with a win at Saratoga this weekend. That would leave three 1-2 teams – Saratoga, Pine Bluffs and Wright – along with Linle-Fort Laramie and Moorcroft, both 1-3, fighting for the final two slots.

Meeteetse’s four conference wins have come against teams that are a combined 3-10 in the West, but the Longhorns likely don’t care. Whether or not they finish in the top two so they can host a playoff game will come down to how they fare against defending state champion Snake River (2-2) and Farson to finish the season.

Farson has also built its resume on beating lesser foes (a combined 2-8), but, similar to Meeteetse, the Pronghorns are OK with that.

Snake River and Encampment (1-2) seemingly have the best chance to complete the West playoff field, although no team has been eliminated yet.

In the East, Kaycee (2-0) continues to lead the way. Behind the Buckaroos, however, are four teams at 1-1 – Hulett, Guernsey, Hanna and NSI Academy – so Kaycee isn’t out of the woods yet.

In other words, the playoff picture remains up in the air. When the postseason begins on Oct. 30, 40 teams will still be standing. Seven – Cheyenne Central, Cheyenne East and Thunder Basin in 4A, Lusk and Rocky Mountain in 1A/9-man and Farson and Meeteetse in 1A/6-man – have already punched their tickets. The other 33 spots remain up in the air.

And with the way this season has gone, don’t be surprised to see the final spots, or at least some of the seedings, push the regular season past Oct. 24.

“It could come down to all the crazy tiebreakers and who flips the coin right at Buffalo Wild Wings,” Makelky said.

WEEK 6: Heading into this weekend's games, only seven teams have secured playoff spots and no team has been eliminated.

Here are some preps players to keep an eye on this week.

Prep football playoffs kick off Friday across the state

All five defending state champs are set to defend titles.

While the Trojans are favored to beat Gillette for the fourth year in a row, they need to create some momentum heading into the playoffs.

Although a number of teams are playing for playoff seeding this weekend, only four of the 40 postseason spots are up for grabs across all five classifications.

Natrona County quarterback Tyler Hill pushes for a touchdown in overtime against Sheridan on Oct. 2 at Cheney Alumni Field in Casper.

Kelly Walsh's Esaias Spillane is swarmed by the Thunder Basin defense during their game Oct. 2 at Harry Geldien Stadium in Casper.

Kelly Walsh receiver Dom Jahr runs for yardage after catching a pass against Rock Springs on Sept. 11 at Harry Geldien Stadium in Casper.