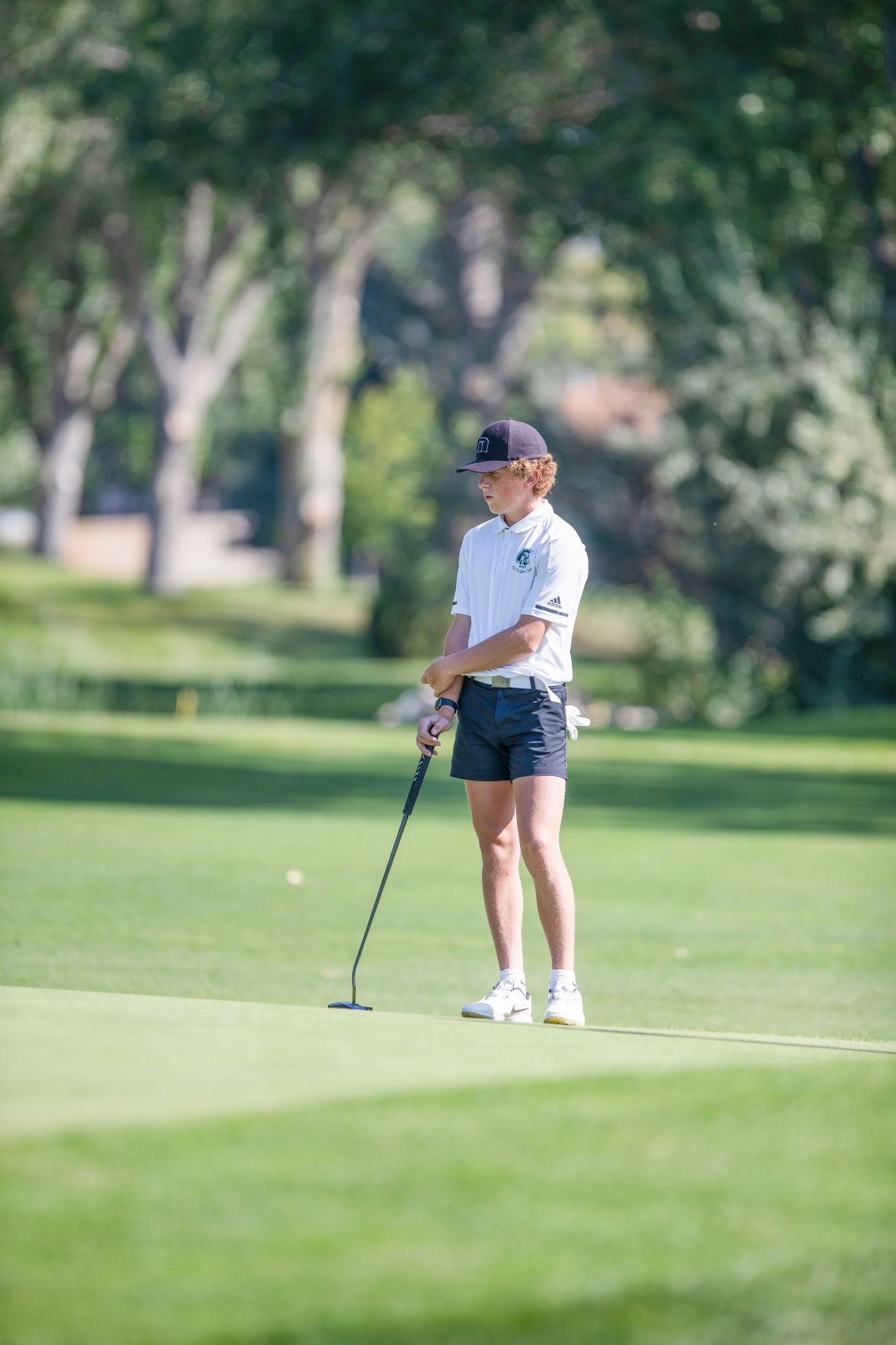 Kelly Walsh junior Brodey Deacon contemplates his next shot during the Casper Invite on Aug. 23 at the Paradise Valley Golf Course. 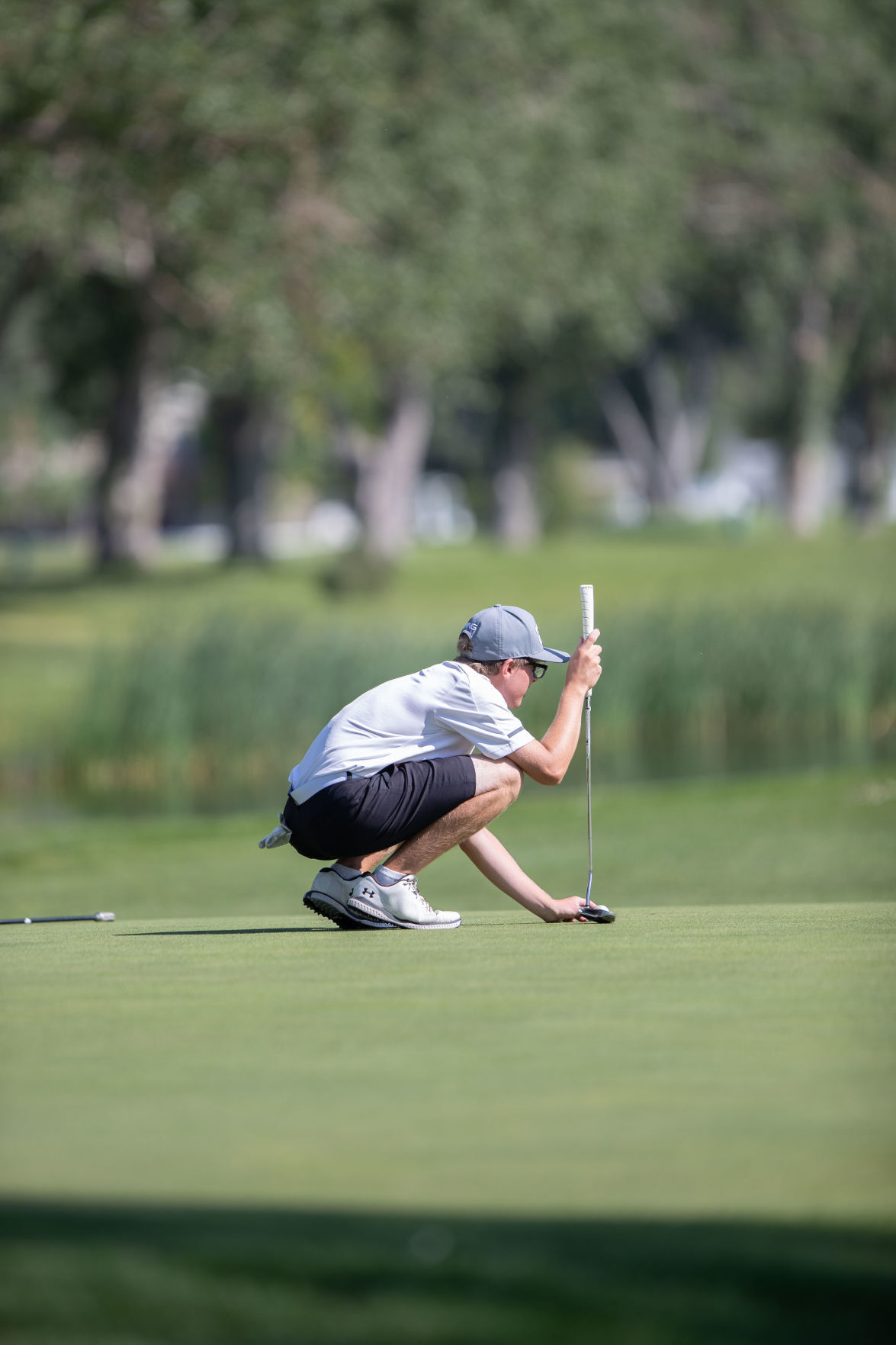 Kelly Walsh senior Noah Oliver lines up his putt during the Casper Invite on Aug. 23 at the Paradise Valley Golf Course.

Not much was expected from the Kelly Walsh boys’ golf team this year. After all, the Trojans were coming off a ninth-place finish at last year’s state meet in which they finished 68 strokes back of Class 4A team champion Sheridan.

“Going into last fall there wasn’t a coach in the state that would have said Kelly Walsh will be competing for a state title this year,” KW head coach Brandon Schaefer said in a recent interview.

The Trojans then went out and proved all those coaches wrong. Kelly Walsh won both the Casper Invite and the 4A West Conference meet in Evanston and had a two-stroke lead over Sheridan and host Jackson after the first day of the state meet last month before finishing four strokes back of Jackson.

Led by a group of experienced golfers, Kelly Walsh won three consecutive team titles from 2017-19. That changed last year after all five of the golfers who played on the 2019 team graduated. That meant juniors Tanner Warren and Noah Oliver and sophomore Brodey Deacon, who were all playing varsity for the first time, had to step up.

“As a team last year we never won a tournament and we were never leading a tournament,” Warren said.

Deacon and Oliver were the top Trojans at last year’s state meet at Three Crowns Golf Club in Casper as they tied for 20th place, with Warren tying for 28th.

Not wanting a repeat of last year’s disappointing finish, all three worked on improving different aspects of their games.

“Last year I would get frustrated easily,” Warren said, “but this year I was able to keep focused, stay in the game and worry about the next shot. All three of us went out and played a ton this summer and we really connected. We all got five to 10 strokes better.”

Added Oliver: “I got a lot more distance and a lot more accurate with my long clubs. Last year I would have a bad hole and it would stay with me throughout my whole round, but now I can come back from a bad hole.”

Deacon kept it simple. “My short game is what saves me,” he said.

“The first tournament at Gillette this year Brodey was leading with a 73, I shot a 78 and Noah had an 81,” Warren said. “Right then I was like, ‘We’re going to be good this year.’”

Warren and Oliver finished 1-2 at the Casper Invite, with Warren adding five other top-four finishes, including tying for fourth at state with a 163. The senior recovered from an opening-round 84 at the Snake River Sporting Club to card a 79, which tied him for the lowest round of the day, at the Shooting Star Golf Club in Teton Village.

Deacon tied for sixth at the state meet with a 165 while Oliver had a 176. In between Deacon and Oliver, freshmen Isaac Schmidt and Brady Wicks had 172s to tie for 20th.

“Everybody embraced the two freshmen and brought them into Kelly Walsh High School golf,” Schaefer said. “Never once did I feel like they felt bad for themselves. Even when they didn’t play great, they felt great for the team.”

Throughout the season the two rookies proved they belonged on the varsity squad. They both had top-10 finishes at the Casper Invite, with Schmidt tying for seventh and Wicks placing 14th at the conference meet.

“Having the confidence that our two freshmen were going to play good really took some pressure off all three of us,” Oliver admitted. “We could have a bad hole and they would be there to pick us up. With that mentality you just get into a different mindset and can shoot a good score.”

Kelly Walsh junior Brodey Deacon contemplates his next shot during the Casper Invite on Aug. 23 at the Paradise Valley Golf Course.

Kelly Walsh senior Noah Oliver lines up his putt during the Casper Invite on Aug. 23 at the Paradise Valley Golf Course.