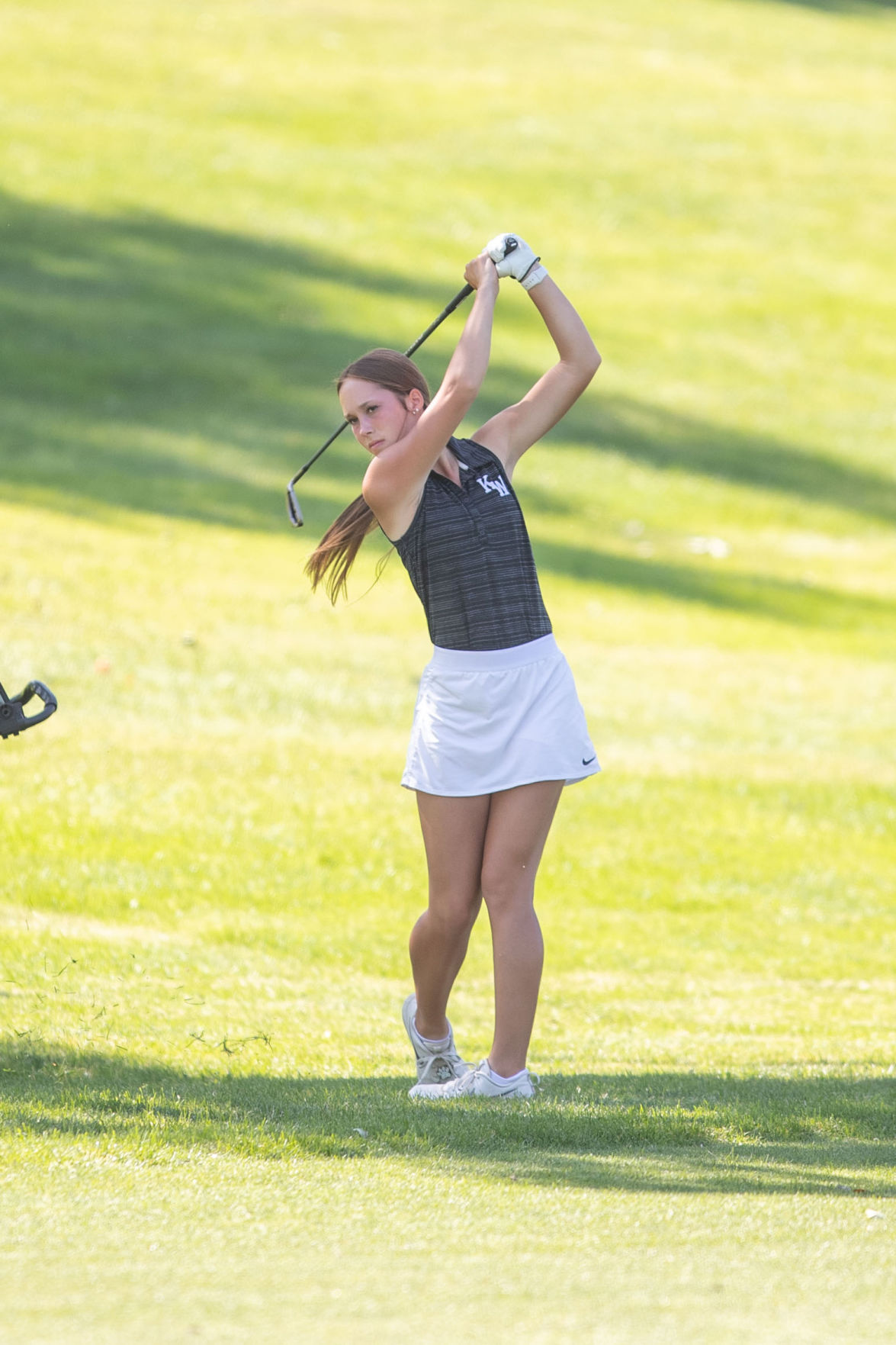 Kelly Walsh junior Haily Kalus hits from the fairway during the Casper Invite on Aug. 23 at the Paradise Valley Golf Course. Kalus won the Class 4A state championship last month in Jackson. 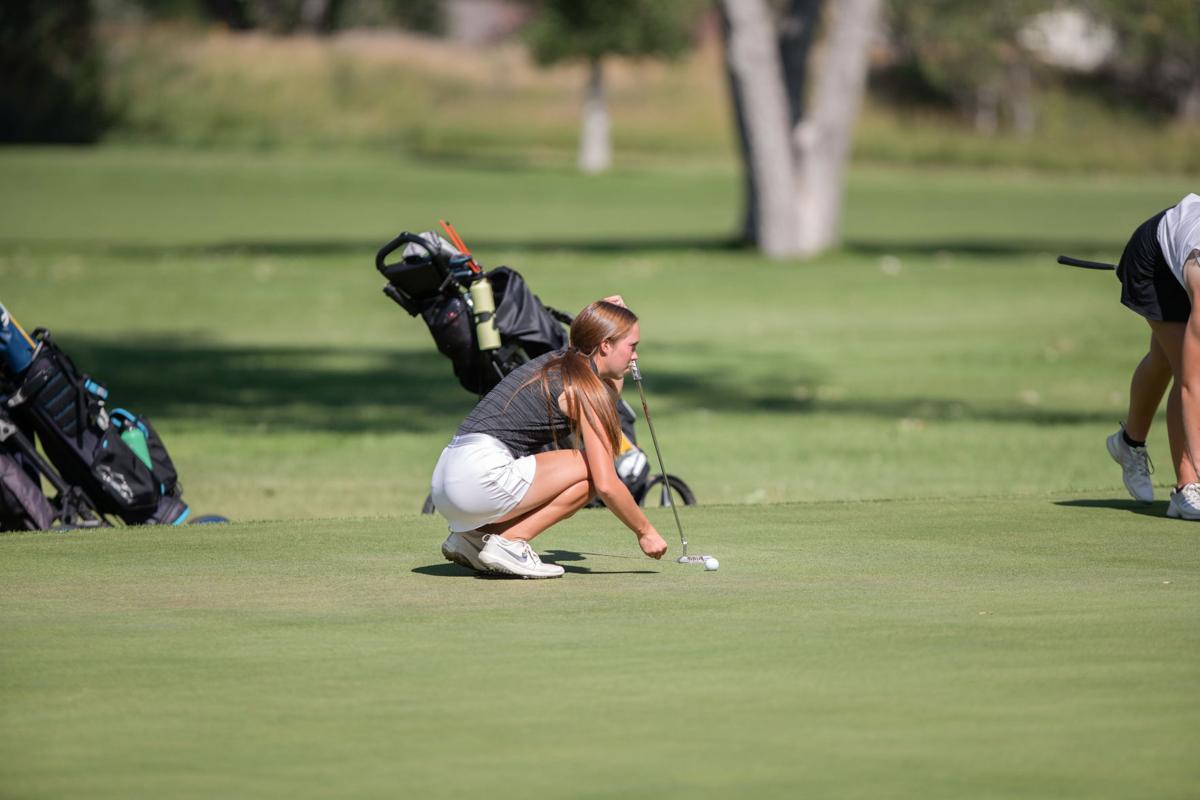 Kelly Walsh junior Haily Kalus lines up a putt during the Casper Invite on Aug. 23 at the Paradise Valley Golf Course. Kalus won the Class 4A state championship last month in Jackson.

“Honestly, it hasn’t sunk in yet,” Kalus said in a recent interview. “Being able to come back after being down by four strokes is crazy.”

But that’s just what Kalus did last month. She opened with an 84 on the Snake River Sporting Club course in Jackson and finished the first day in sixth place, four strokes back of Sheridan’s Gabi Wright and Natrona County’s Sophie Spiva.

“I had a quadruple and a quintuple (bogey) and I still ended up shooting an 84,” she said. “To be able to make par after one of those terrible holes was a testament to my mental game.”

Kalus credits that mindset for her success this past season. She finished third at both the season-opening Thunder Basin Invite in Gillette and the Casper Invite in late August. Kalus also won gold at the Sheridan Invite and the Riverton Match Play before closing her impressive junior campaign with a 14-stroke victory at the 4A West Qualifier in Evanston followed by the state championship.

“I worked on my short game over the summer,” she said, “but overall it was just trying to stay mentally strong. I ended up getting very good at recovering and grinding on my short game. Putting used to never be something I could depend on, but now it is something that I can depend on.

“I literally set a goal before the season to win a tournament and I was able to win three plus a state title.”

At Jackson, on two courses she had never seen before let alone played on, Kalus remained calm despite ending the first day six strokes back of the leaders. She was paired with first-day leaders Spiva and Wright and Cheyenne Central’s Katie Cobb, who had opened with an 83.

“I really just tried to play my own game and not think about anything else,” Kalus said of her mindset entering the final round.

Despite Kalus having five golfers ahead of her in the standings, Kelly Walsh golf coach Brandon Schaefer liked her chances.

“That course was hard,” he said, “so whoever was going to be mentally strongest that day was going to win. Haily doesn’t try to do too much and that’s how she won.”

Playing the Shooting Star Golf Club at Teton Village, which Golf Digest recently rated as No. 123 on its list of America’s top golf courses, Kalus went to work.

“On the first nine (holes) I stayed consistent and we kept the same gap,” Kalus said. “And about halfway through the second nine was when I was able to stay strong and keep making up strokes while they were falling off. But I didn’t really know until the last hole that I had sealed the deal.”

Kalus finished with a 78 — Sheridan’s Libby Gardner, who carded a 79, was the only other golfer to shoot below 80 — to give her a two-day total of 162. Wright, who eagled the last hole, was second with a 163 and defending state champion Samantha Spielman of Sheridan was third with a 164.

“People were telling me before the round to be happy with an 85 because the course was so tough,” Kalus recalled. “But I just went shot-shot, hole-to-hole.

“It was really special to win ... It’s still so hard to think about.”

Kalus is the first Kelly Walsh girls golfer to win the individual state title since Jocelyn Olson in 2017.

Kelly Walsh junior Haily Kalus hits from the fairway during the Casper Invite on Aug. 23 at the Paradise Valley Golf Course. Kalus won the Class 4A state championship last month in Jackson.

Kelly Walsh junior Haily Kalus lines up a putt during the Casper Invite on Aug. 23 at the Paradise Valley Golf Course. Kalus won the Class 4A state championship last month in Jackson.