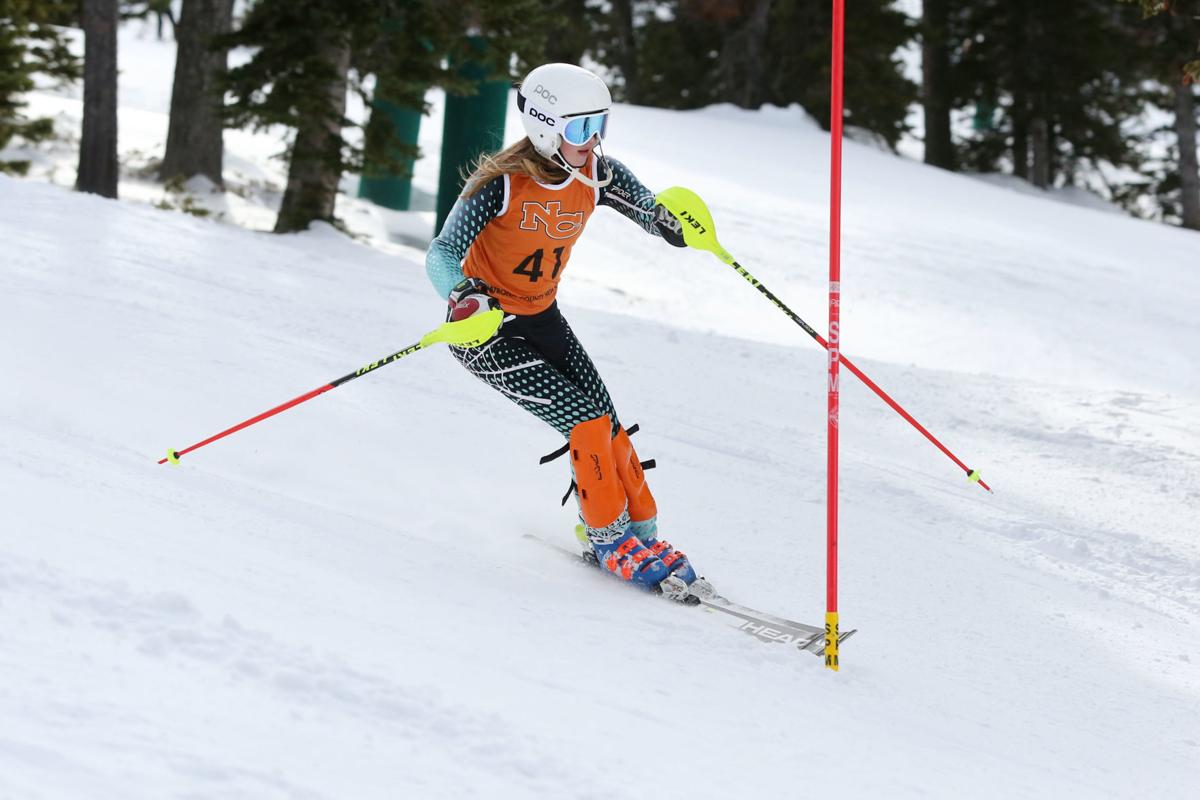 Natrona County's Elena Galles works her way down the Boomerang course for her second slalom run during the Bruce Studer Memorial Invitational on Friday at Hogadon Ski Area on Casper Mountain. 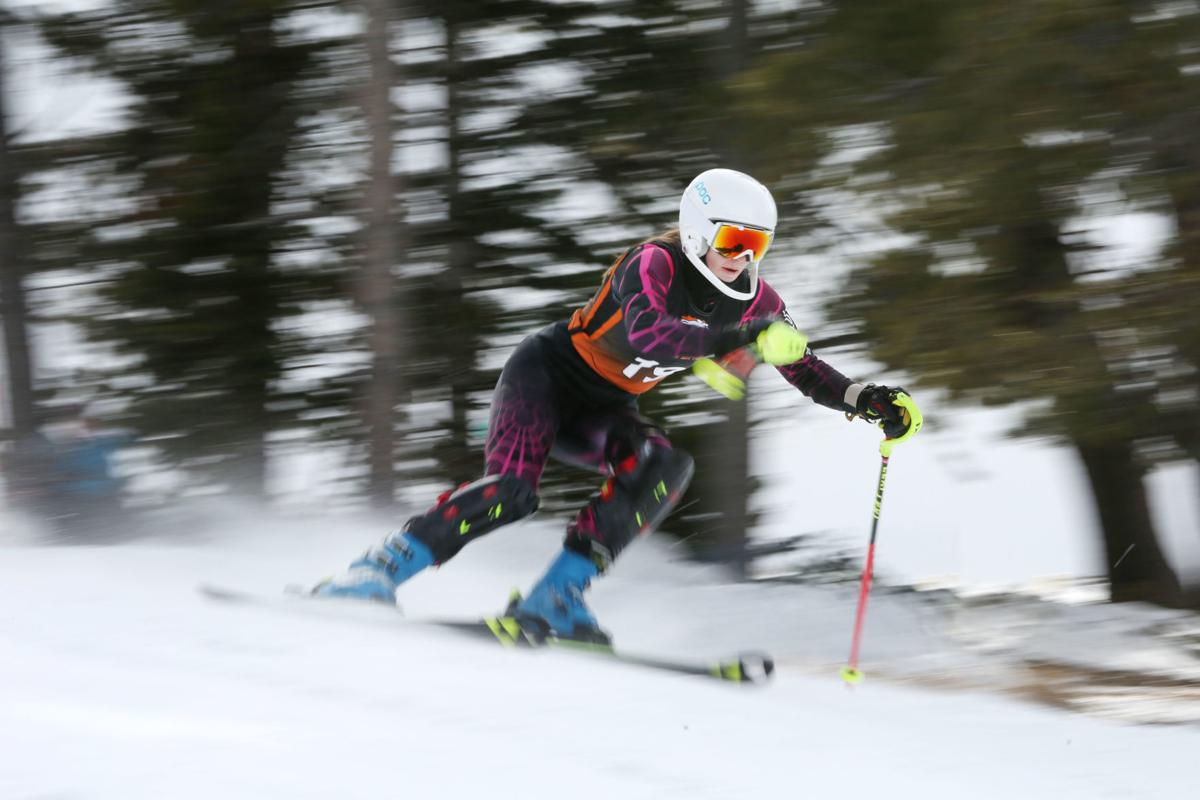 Having already been on the mountain longer than in previous years, the two Casper high school alpine ski teams happily welcomed their in-state competition to Hogadon Ski Area for the first day of the 2020 Bruce Studer Invitational on Friday.

Heavy snowfall starting in late October allowed Hogadon to open sooner than in year’s past. Despite student’s lack of ability to practice before courses close on school days, both Kelly Walsh and Natrona County teams found moderate success two weeks ago at the season-opening meet at Snowy Range outside Laramie.

Bringing the first home meet of the season out onto the friendly slopes of Hogadon, in particular the turns on the resort’s ‘Boomerang’ course, the Casper competitors were free to ski with complete familiarity.

“It felt pretty good,” Kelly Walsh senior Dane Rasmussen said. “We were very fortunate to get on the snow very early in the season. First time in five years we were able to get on the snow in November and December so that was really good. Today it was good snow, felt good, and a good time for all of us.”

The Trojans senior came into Friday’s slalom with momentum and confidence after finishing second in the opening slalom at Snowy Range. That followed him through his first run, where he notched the second-best time of the morning runs by clocking-in at 41 seconds flat. He trailed only Jackson’s Nicholas Janssen, who finished the initial run in a blistering 37.32 seconds. Rasmussen did not finish his second run and Janssen won the day with ease.

Wind intensified during the lunch break and whipped at skiers’ backs during second runs, bringing mixed results. For Rasmussen, that meant shaping down the snow and leaving a layer of more hardened, ice-packed snow rather than the soft powder that sat from Thursday’s brief snowfall. And he liked it that way.

“I’m kind of picky when it comes to my snow,” Rasmussen said. “I like this but not so much powder, a little bit harder than most people would prefer. But I enjoyed it, it was fun.”

As did Dane Locklin, his Kelly Walsh teammate. Locklin notched the third-best time among first runs with a 41.31-second run. He finished third for the day. Jackson’s Fin Hutchinson (42.73) and Laramie’s Ashton Ford (42.77) rounded out the top-five boys on first runs and both finished in the top five, alongside Cody’s James Davis.

The girls started Friday’s action and the Jackson team quickly seized control. Sophie Morgan broke 40 with a 39.72-second first run, Sidney Nash followed with a 40.77 and then the duo of Sophie Parker (42.37) and Fussy Girling (42.55) helped Jackson take the top four spots on first runs and give the defending dynasty a considerable lead in the slalom. Natrona County sophomore Elena Galles broke the top five with a 44.52 and Kelly Walsh senior Ludovica Polvara also broke the Jackson monotony by finishing sixth with a 44.80 on her first run. Sophie Delahaye of Jackson rounded out the Broncs’ team with a seventh-place first run. The top six held for the day’s total and Cody’s Nicole Wagner nuck into seventh as Girling did not finish her second run.

Polvara, a foreign exchange student from Italy wearing her orange ski suit complete with “ITA” on her legs to represent her homeland, also enjoyed Friday’s action on the familiar slopes after her sixth-place finish to open the season.

“I’m feeling good,” Polvara said. “It was a good run. It felt good, and it was a nice day so it was all nice.”

Galles, one of Casper’s top skiers, came off a disappointing did-not-finish second run at Snowy Range two weeks ago after posting the sixth-best first-run time. Natrona County’s second-best female skier, Aleka Blair, did not compete on Friday after also recording an unfinished time in her second slalom run two weeks ago.

SUCCESS: Casper skiers found comfort in the familiarity of their home course and the blue run, Boomerang.

HE SAID IT: "First time in five years we were able to get on the snow in November and December so that was really good. Today it was good snow, felt good, and a good time for all of us." -- KW senior Dane Rasmussen.

The senior's made himself into a gold-medal threat.

Natrona County's Elena Galles works her way down the Boomerang course for her second slalom run during the Bruce Studer Memorial Invitational on Friday at Hogadon Ski Area on Casper Mountain.