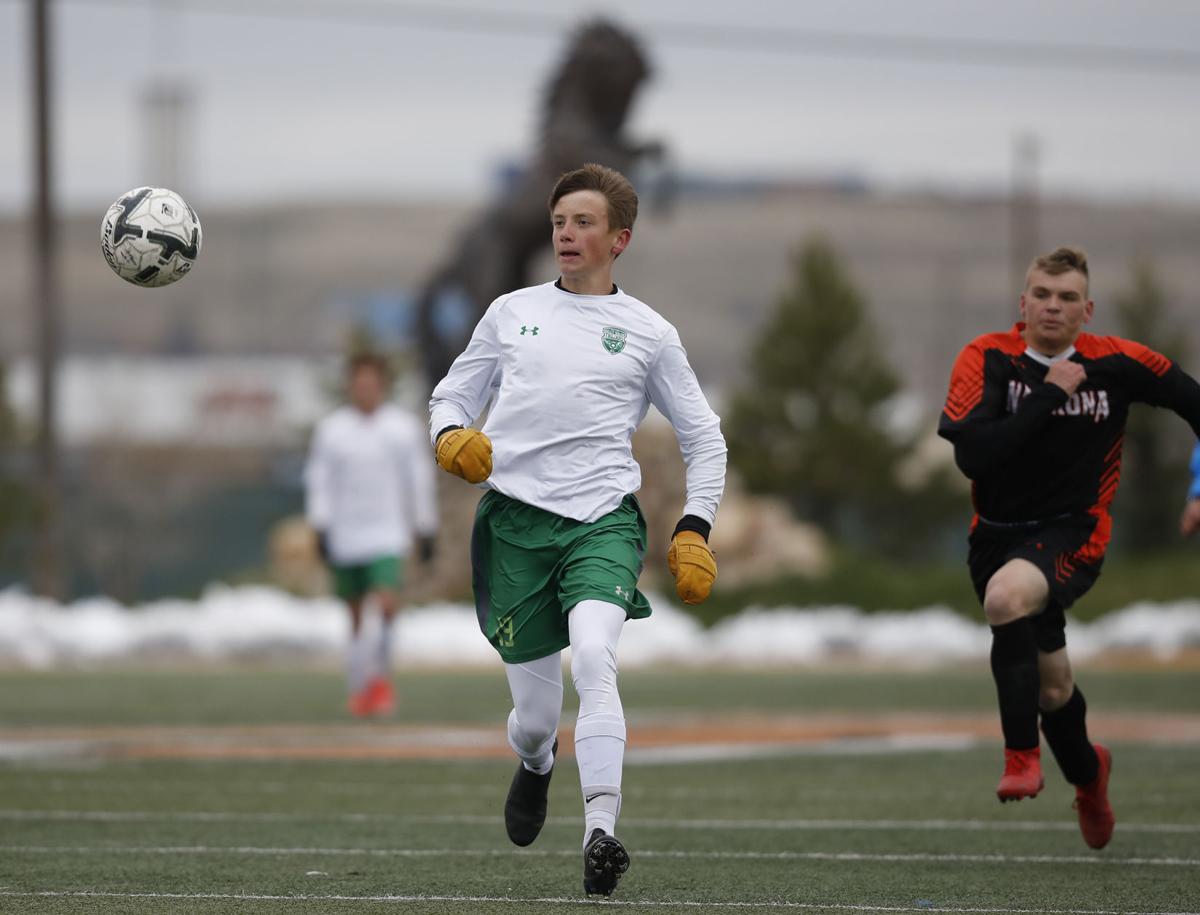 Kelly Walsh's Colten Atkinson chases the ball up the field during the Trojans' Casper Cup victory over Natrona County on April 30, 2019 at Cheney Alumni Field in Casper. 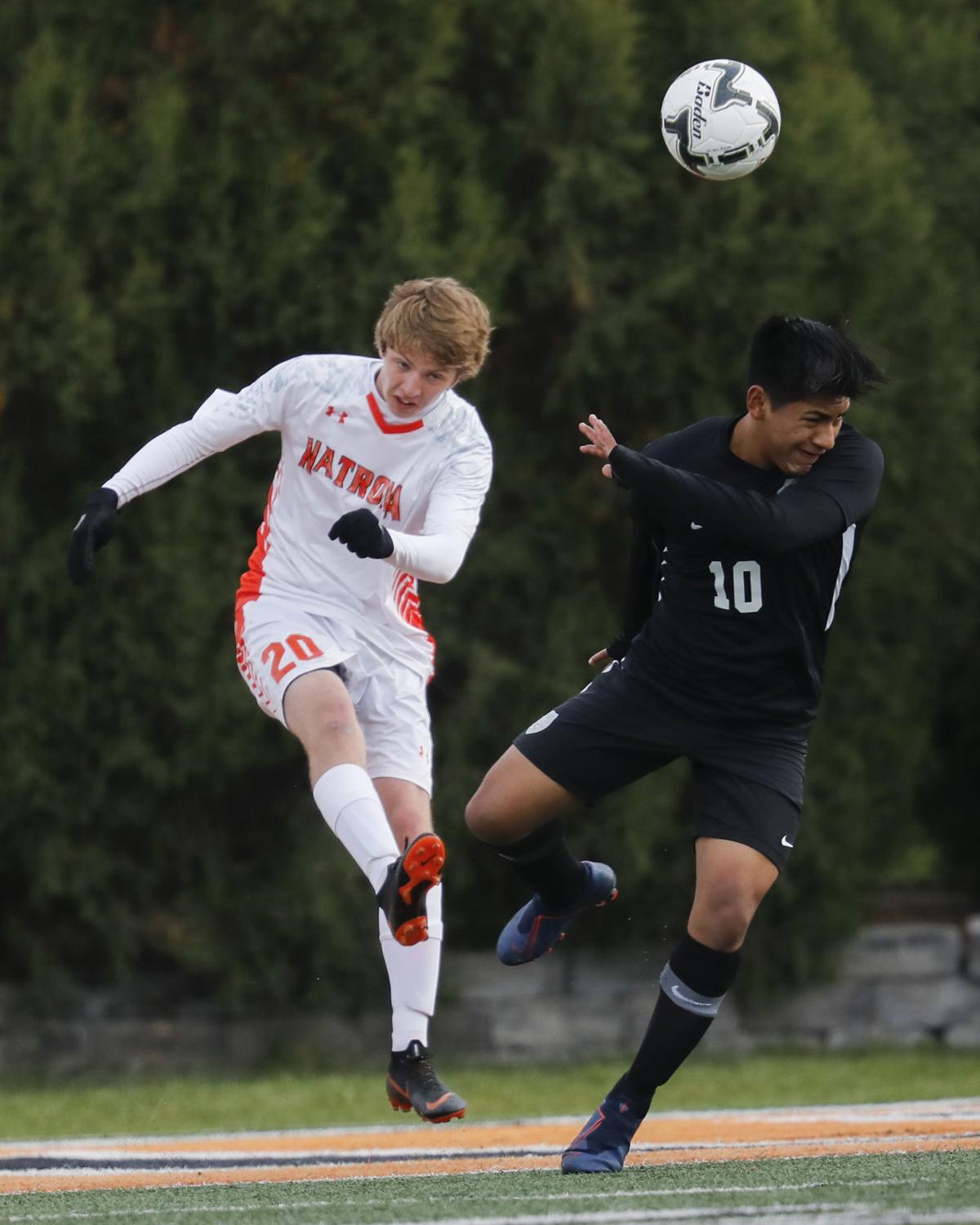 Natrona County's Conner Shipper kicks the ball over Jackson's Rico Vazquez during their West Regional game on May 9, 2019 at NC's Cheney Alumni Field in Casper. 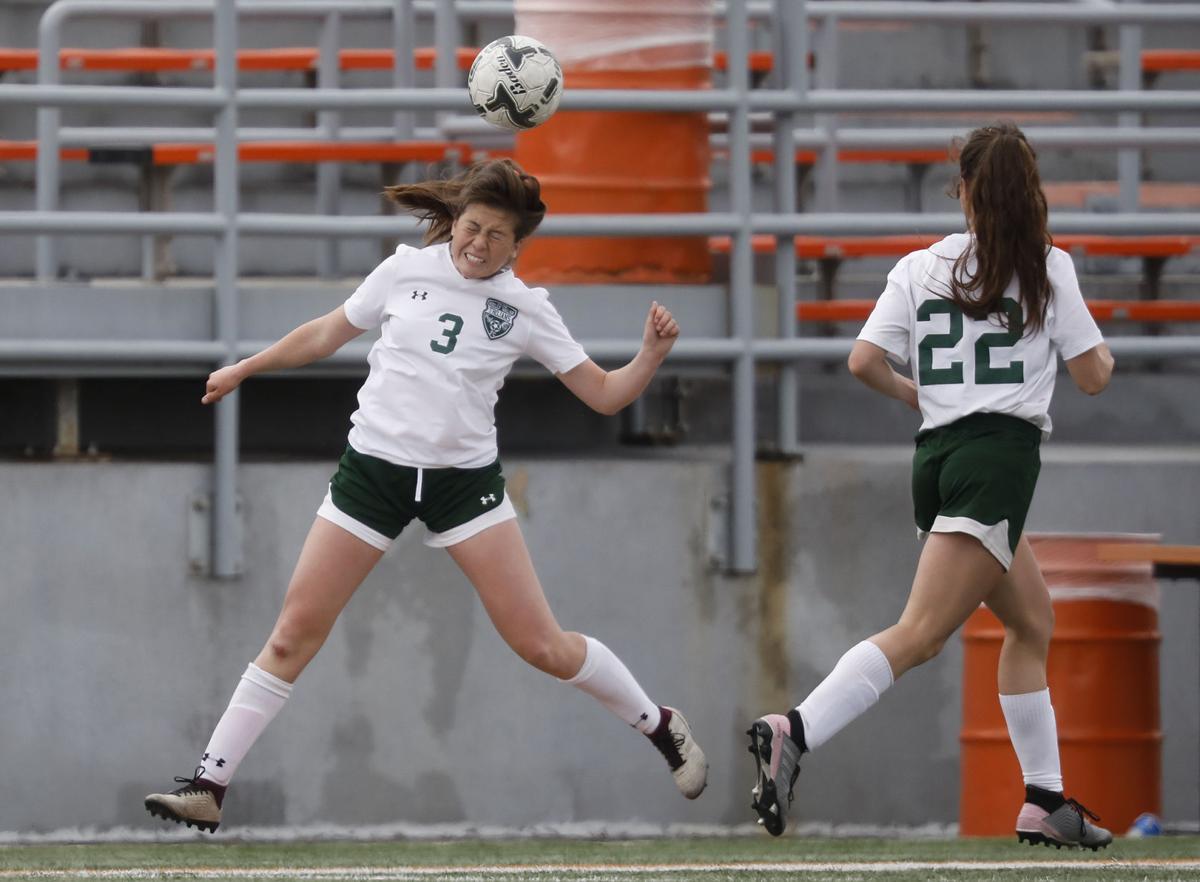 The Kelly Walsh and Natrona County boys and girls soccer teams were supposed to open the season this past weekend in Cheyenne. But last week’s snowstorm that dumped more than 2 feet of snow in both Casper and Cheyenne made that an impossibility.

As a result, and weather permitting, Kelly Walsh and Natrona County will finally kick off their 2021 seasons Tuesday at NC’s Cheney Alumni Field. While KW and NC would have preferred to have played a couple matches before facing off against their crosstown rivals, it’s better than the alternative. Last year, the entire spring sports seasons were canceled because of the coronavirus pandemic.

“We’re grateful to be playing and the kids are just chomping at the bit to get out there on the big field playing with their buddies,” longtime KW boys head coach Bryan Chadderdon said.

It’s a sentiment shared, obviously, by the players for the Trojans, Mustangs and Fillies. Even though the majority of their practices to this point have been inside — KW girls head coach Jerry Realing jokingly said he is considering changing his team’s name to the “Kelly Walsh Gym Rats” — the fact remains that there will be a season this spring.

A number of players for all four programs were able to play club soccer last summer as well as in some indoor tournaments over the winter, but when the teams take the field Tuesday it will have been 674 days since either Kelly Walsh team played a competitive game. For the Natrona County teams it will have been 683 days.

Surprisingly, both KW teams return a core group of players who played prominent roles as underclassmen. For the boys, seniors Colten Atkinson and Sian Realing and juniors Hayden Hollinger and Caden Allaire are back.

“Colten was one of the leading scorers in the state as a sophomore,” Chadderdon said. “And Sian is one of our leaders. And Hayden started as a freshman and Caden split time in goal so he’ll be our starter this year.”

Among the returners for the KW girls are seniors Paige Hill, Barrett Lloyd and goalkeeper Alyssa Depoorter. Hill and Depoorter were all-state selections as sophomores.

“We have a pretty good core group of seniors coming back and we have some solid juniors,” head coach Jerry Realing stated. “There are way more unknowns than knowns at this point, but I think every team is in that position.”

Both Kelly Walsh teams experienced success in 2019, with the boys winning the consolation championship at state and the girls winning a quarterfinal game at state for the first time since the 2005 state championship team.

On the other side of town, neither Natrona County team has qualified for state since 2018, when the Mustangs won the state title as the No. 4 seed out of the West and the Fillies went 0-2.

The lack of outside practice time has been both a curse and a blessing for first-year Mustangs head coach Chris Stier.

“We’ve only been outside twice and the first day was making sure everybody had their paperwork,” Stier said. “But with me being a first-year coach, I have had a lot of time just getting to know everybody’s name.”

“They have varsity experience and have been playing for quite a while,” Stier said. “It’s great because I can rely on those guys to help me out. And I’ve put my own little spin on it as well.”

For the Fillies, senior keeper Hannah Trumbull and junior Hailie Wilhelm are two of those expected to be on the pitch for head coach Lydia Bell.

With another spring snowstorm expected Tuesday, there’s a chance neither Kelly Walsh nor Natrona County will kick off their seasons until later this week or possibly even next week. However, just knowing that there will be a season — a handful of teams played over the weekend — is a step in the right direction.

“We don’t want to complain about it too much because we’re happy to be playing,” Realing said. “We have a season, so we’ll lean on that and eventually we’ll get outside.”

FINALLY (MAYBE): Weather permitting, the four Casper programs will kick off their 2021 seasons. The 2020 season was canceled because of the coronavirus pandemic.

HE SAID IT: "We’re grateful to be playing and the kids are just chomping at the bit to get out there on the big field playing with their buddies." -- KW boys head coach Bryan Chadderdon.

Kelly Walsh's Colten Atkinson chases the ball up the field during the Trojans' Casper Cup victory over Natrona County on April 30, 2019 at Cheney Alumni Field in Casper.

Natrona County's Conner Shipper kicks the ball over Jackson's Rico Vazquez during their West Regional game on May 9, 2019 at NC's Cheney Alumni Field in Casper.