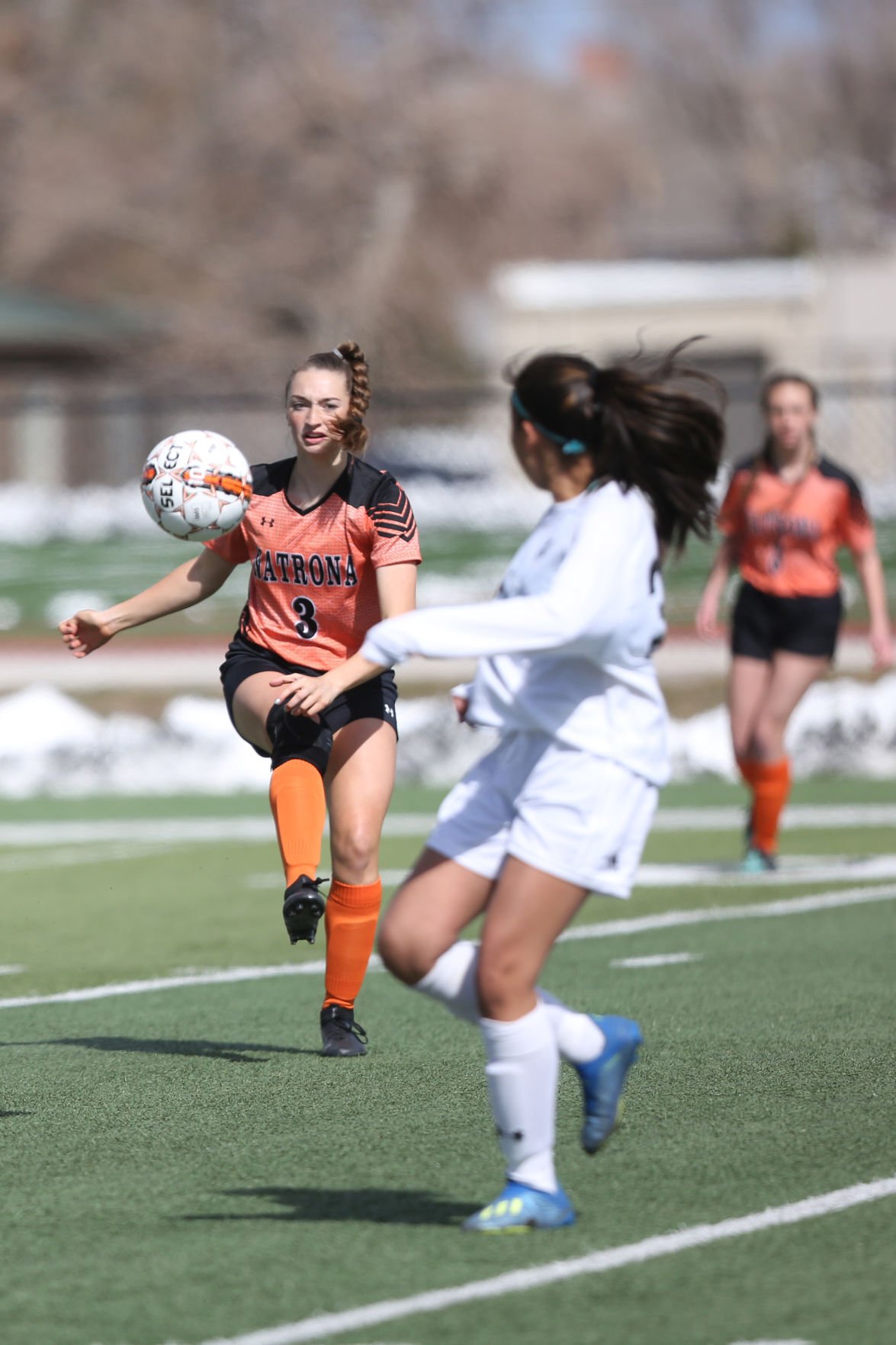 Natrona County's Katelynn Campbell controls the ball in the Fillies' game against Jackson on Friday at Cheney Alumni Field in Casper. 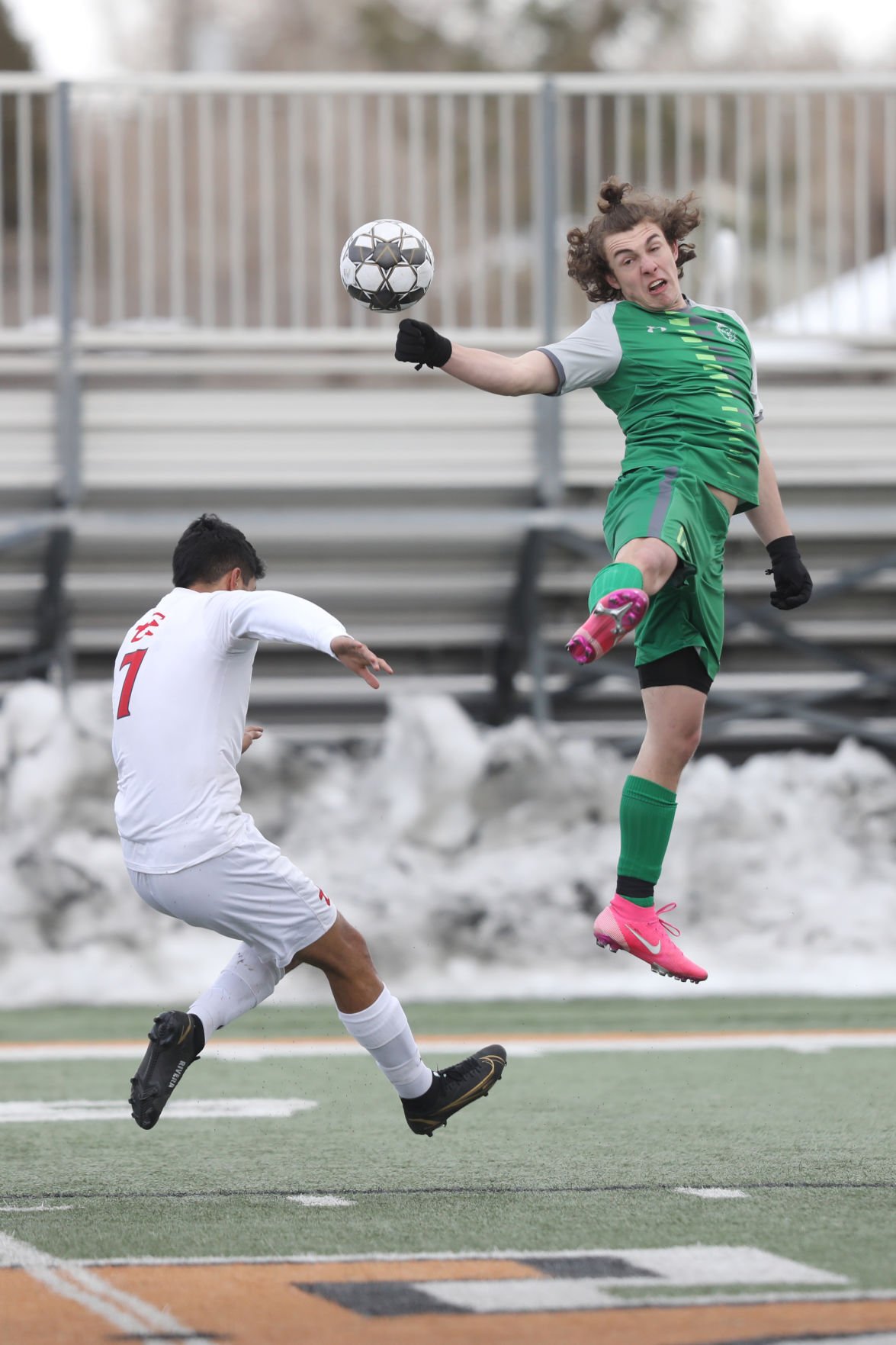 Kelly Walsh's Hayden Umbach jumps to head the ball away from Evanston's Ramon Rivera during their game March 26 in Casper.

The Kelly Walsh and Natrona County soccer teams were scheduled to open the 2021 season against each other before Mother Nature intervened. A record snowstorm in late March forced the Trojans, Fillies and Mustangs indoors before they finally opened their seasons later that week.

Tuesday, three weeks after they were scheduled to meet on the pitch, the crosstown rivals will finally face off at NC’s Cheney Alumni Field. All four teams have had varying degrees of success to this point.

The Natrona County girls, though, are the only ones who have yet to lose a match. The Fillies improved to 3-0-0 overall and in Class 4A West Conference play with a weekend sweep of Jackson (2-1) and Star Valley (5-0). Senior goalkeeper Hannah Trumbull has allowed just one goal through three games and freshmen Kylan Campbell and Brooke Travers have scored three goals apiece and sophomore Chayse Graham has two.

The Fillies will try to slow down a Kelly Walsh attack that shut out Evanston and Star Valley to open the season before the Trojans (2-1-0 overall and in the 4A West) lost 3-1 to Jackson on Saturday. Senior keeper Alyssa DePoorter and senior midfielder Paige Hill were both all-state selections as sophomores and will try to lead Kelly Walsh to its seventh consecutive victory against Natrona County.

On the boys side, the Trojans appear to have the stronger side through the season’s opening weeks. Kelly Walsh (3-1-0, 2-1-0 4A West) outscored its first three opponents 20-0 before losing 3-2 in overtime to Jackson on Saturday. The Trojans are led by a solid group of seniors — Sian Realing and Colten Atkinson were 2019 all-state selections and have both signed with MSU-Billings — with junior keeper Caden Allaire anchoring the back line. Kelly Walsh has won three in a row against Natrona County.

The Mustangs (1-1-1 overall and 4A West) are coming off an impressive 3-1 victory over Star Valley on Saturday in which freshman Jael Reyes scored two goals and senior Max Radosevich scored the other.

Mustangs face Star Valley in first round of West Regionals on Thursday.

Star Valley senior goalkeeper Ethan Nelson was seriously injured in the Braves' game at Jackson on Thursday. Nelson was going for a ball in fr…

The Natrona County and Kelly Walsh boys' soccer teams both got their final weekend of the regular season started on the right foot Friday, wit…

Natrona County's Katelynn Campbell controls the ball in the Fillies' game against Jackson on Friday at Cheney Alumni Field in Casper.

Kelly Walsh's Hayden Umbach jumps to head the ball away from Evanston's Ramon Rivera during their game March 26 in Casper.