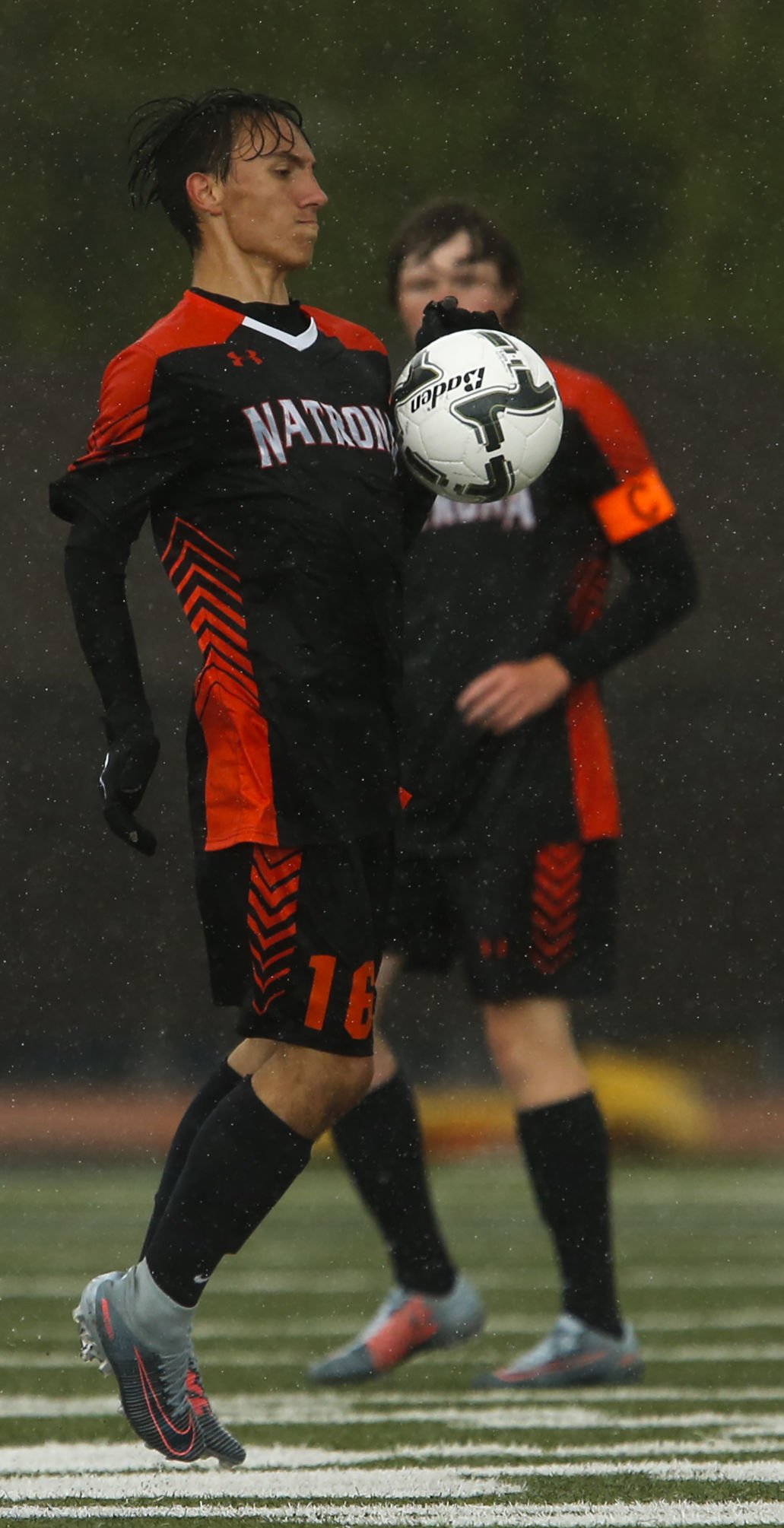 Natrona County’s Isaac Palomo chests the ball during the championship game of the Wyoming State High School Class 4A Boys Soccer Championships on May 19, 2018  in Jackson. 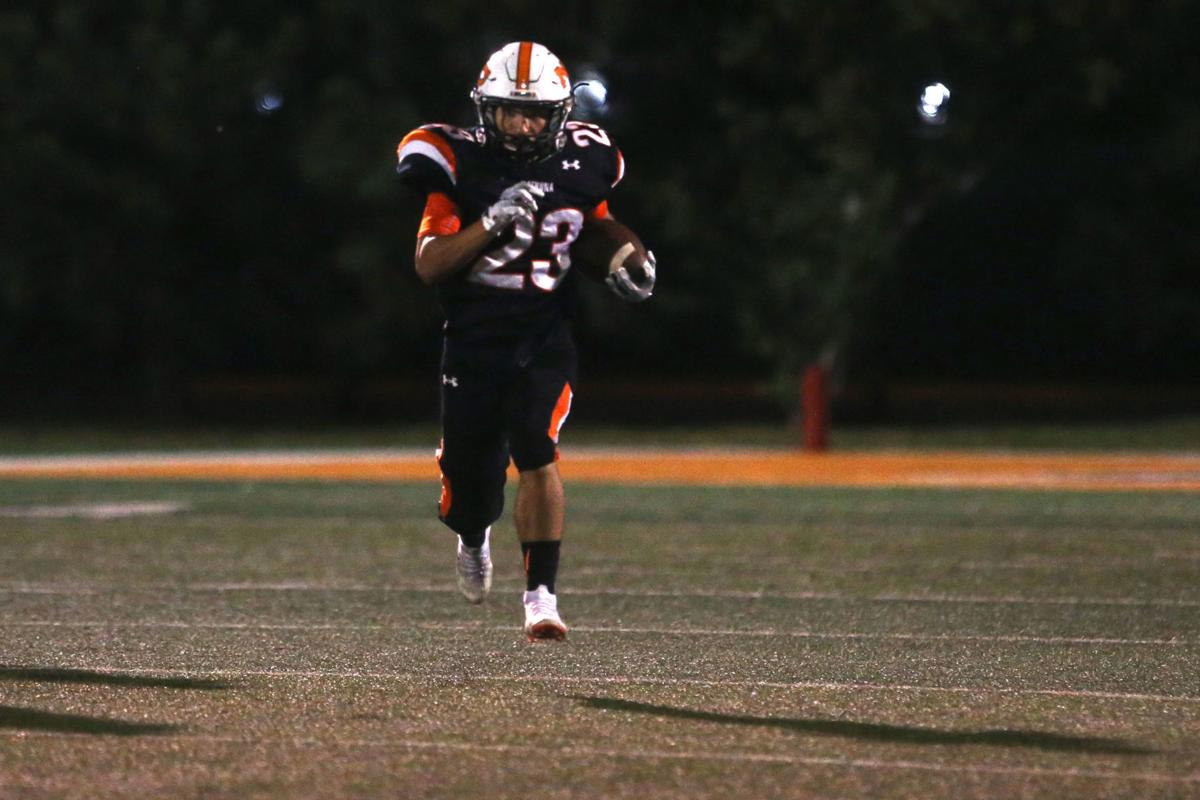 Natrona County's Isaac Palomo returns a kickoff in the Mustangs' game against Gillette on Sept. 6, 2019 at Cheney Alumni Field in Casper.

In the fallout of what’s become the end of his senior year of high school, Isaac Palomo decided to start skateboarding. It’s always looked fun. And, as he explained with a chuckle, if he broke a bone now it wouldn’t be so bad.

This year was supposed to be about redemption for the Natrona County senior. He missed all but the Mustangs’ final soccer game last year while healing from the complete ACL tear he suffered in the state semifinals the year before — it had been a partial tear that he unknowingly played on for three weeks. He recovered completely for a football season that ended prematurely, an indoor track season where he made the podium in three events and a soccer season he vowed for redemption. That last one never came as the coronavirus forced the cancellation of spring sports after just two weeks of practice. Competitively playing his favorite sport ended after two seasons and an extra game.

“I’ve been playing soccer since little kickers, it was pretty much my main sport,” Palomo said. “It’s what I was passionate about. It’s not only the love for the game but the friendships. All my closest friends were guys I played with growing up through (Casper) Blades and continuing through high school.”

That made swallowing the bitter pill of this season more difficult. He’d been so grateful to play an entire football season and performed well during the indoor track season, but his expectations heightened as soccer season approached. This brought a chance to put the immediate past behind him.

Palomo’s major knee injury relegated him to the sidelines until he accrued enough practices to play in Natrona County’s West Regional opening match against Jackson. The Mustangs’ season had highs and lows, much like the previous year when they made the underdog run to the Class 4A state championship. Palomo returned to the pitch thinking they’d duplicate that. Instead, eventual underdog state champion Jackson eliminated the Mustangs on a last-moment goal in extra time.

All that ran through his head when he heard the Wyoming High School Activities Association’s announcement that the spring sports season for 2020 was being abandoned.

“I was really looking forward to playing this year because I felt like I didn’t prove anything,” he said. “I wanted to show people I could still do something and that we deserved to make it to state. It was pretty disappointing not to prove what we were made of.”

Through that disappointment Palomo’s treasured the good stuff. That state championship run during his sophomore year was incredible. He’d been a dependable fullback for the Mustangs’ defense throughout the homestretch when they scrapped for every result. He played in every game but the final one during Natrona County’s 2018 state championship football season; a bittersweet moment to enjoy on crutches, although the sweetness has remained after the bitterness faded.

The senior’s also realized those friendships that made soccer seasons memorable exist beyond the sport itself. He’s stayed in touch with his Natrona County teammates through quarantine, as well as his friends at Kelly Walsh. Some of those friends have been there through his new skateboarding experiment that’s not remotely out of character.

He used to laugh at the people who said high school flew by — especially when he was a self-described “big shot from middle school.” Then he learned through practice and injury. He’s finished his senior year by telling freshmen on the football team to enjoy every minute because it can end in an instant.

“I looked back at all the memories, the fun trips, the hotels, just being with your boys,” he said. “I love the game but it’s more than just a game for us.”

The future’s uncertain, in general and for Palomo. He was going to pursue medical school because of his family, but he didn’t enjoy his anatomy class this year so he’s going to the University of Wyoming to discover his interests.

He laughed that his sports career’s ended, except for becoming a 2021 intramural champion. Then he hopped on the board by his feet and tried something new. Why not? It’s about having fun.

FUN: Palomo's taken up skateboarding since, seeking more fun times before he figures out what he wants to do next year at the University of Wyoming.

HE SAID IT: "I wanted to show people I could still do something and that we deserved to make it to state. It was pretty disappointing not to prove what we were made of." -- Palomo.

Nowlin: The 2019-20 prep sports season comes to a quiet conclusion

The last state championship trophy was handed out on March 7.

Natrona County’s Isaac Palomo chests the ball during the championship game of the Wyoming State High School Class 4A Boys Soccer Championships on May 19, 2018  in Jackson.

Natrona County's Isaac Palomo returns a kickoff in the Mustangs' game against Gillette on Sept. 6, 2019 at Cheney Alumni Field in Casper.