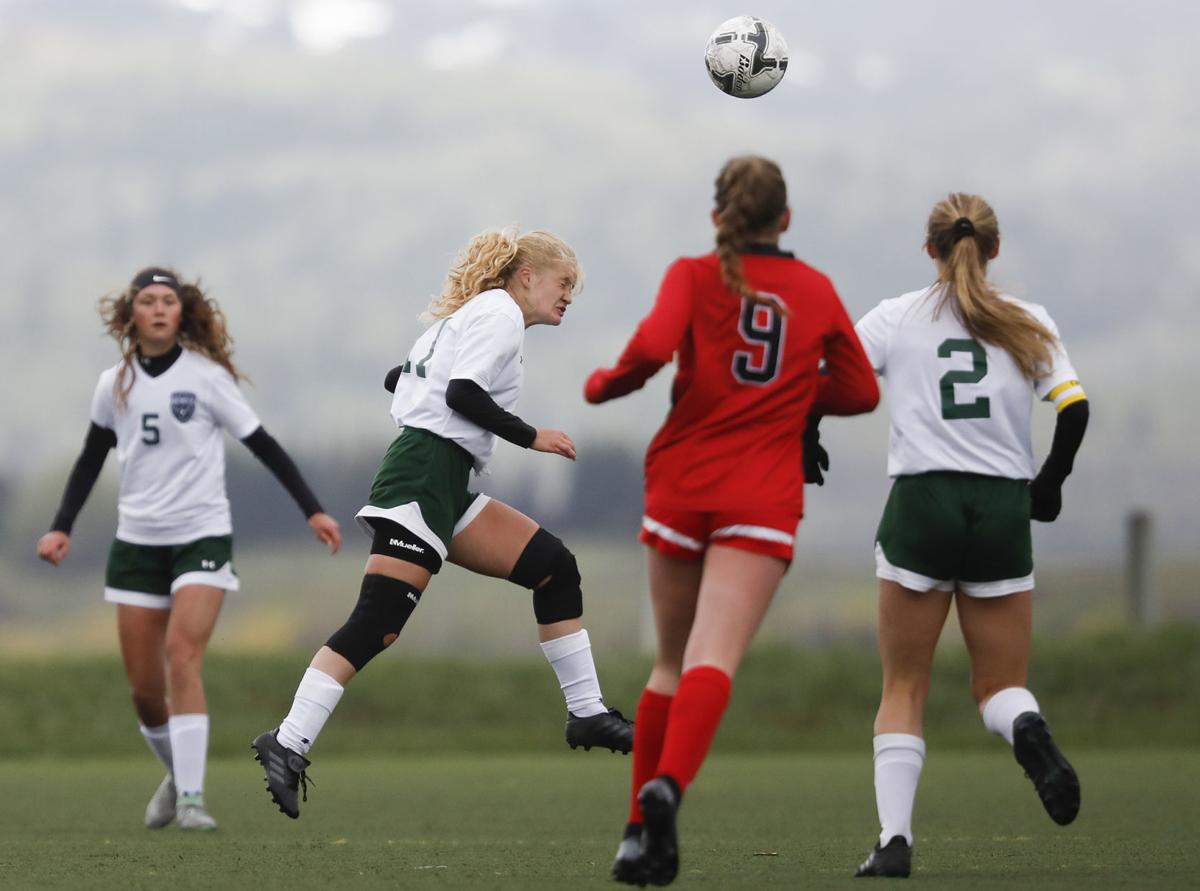 Kelly Walsh's Katie Owen heads the ball toward the sideline during a semifinal game against Cheyenne Central a the Wyoming State High School Class 4A Soccer Championships on May 17, 2019 in Jackson. 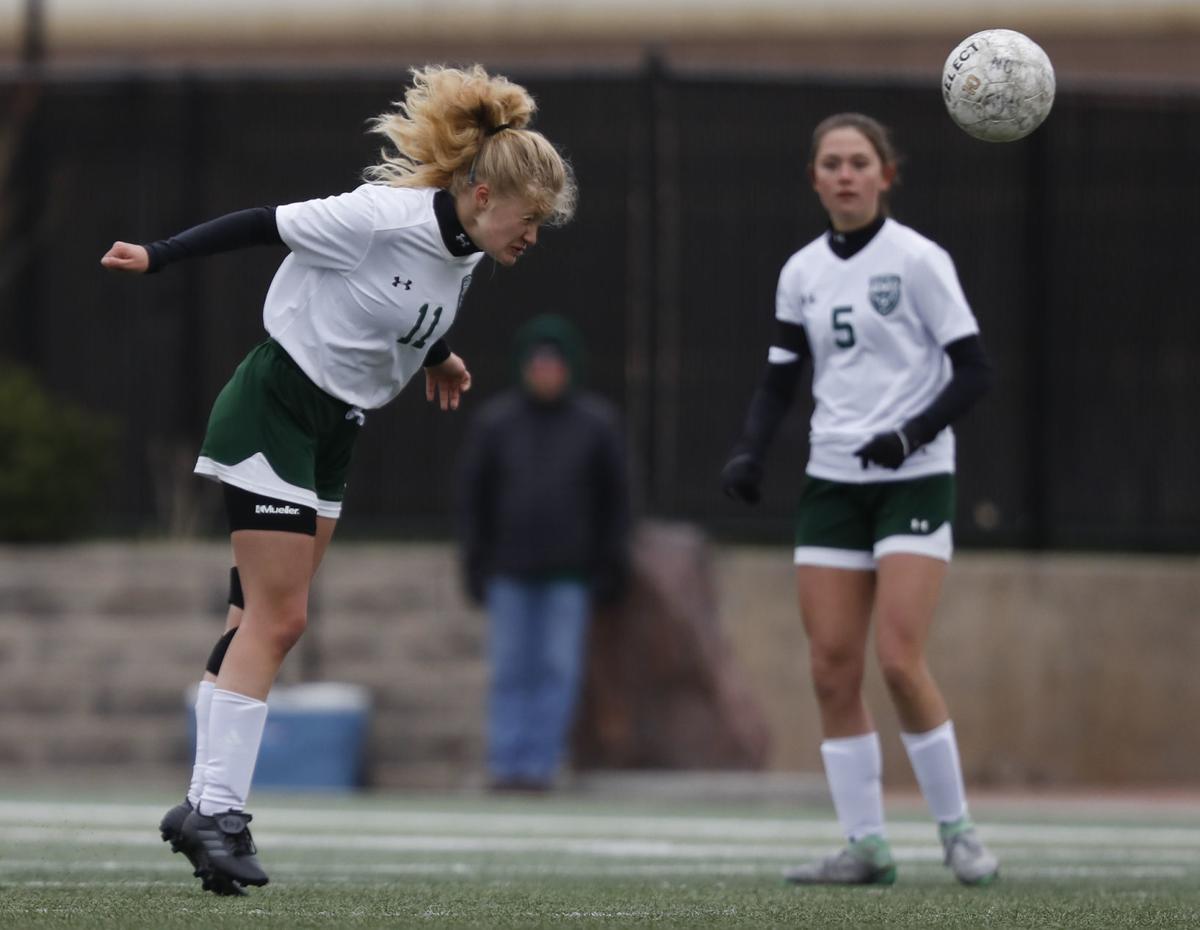 Kelly Walsh's Katie Owen heads the ball during the Trojans' game against Natrona County in the Casper Cup on April 30, 2019 at Cheney Alumni Field in Casper.

This spring was supposed to be her time. She carved her place in the Trojans’ lineup last year among a potent senior class. It was her best season yet and this season promised further improvement. Then came the novel coronavirus to wipe that potential away. She’d never get a senior year with the Trojans.

“I’m so disappointed to not see what she could do this year because she was having an amazing year last year,” Realing said.

Admittedly, it took Owen a while to process what happened when the Wyoming High School Activities Association Board of Directors canceled the spring sports season following weeks of suspension and loose ends. They Trojans had started practice as normal and then the seniors took over some self-guided practices among the team. Those practices fizzled out, however, as one by one the girls were quarantined by their families.

Owen was excited to be a leader and get to know the freshmen, embracing the leadership role that she’d grown into as a prominent senior. She’d started playing soccer at 5 years old but didn’t start truly enjoying it until 6 years later. That’s when Realing noticed her, while helping coach a team with Casper Blades.

There was no question she’d play at Kelly Walsh. Realing saw the potential even with Owen’s size and physicality disadvantage. She had leaders to learn from, but there was no greater leader than experience.

“It was a little rough as a freshman because you’re playing with girls four years older than you and it’s an entirely different game,” Owen admitted. “I had to work my way up the ladder each year of playing. I just got a little better and adapted each year.”

Last year she broke through to varsity and found a home at center back alongside one of the team’s senior captains, Maddi LeClair. Owen held LeClair and fellow captain Nicole Klungness in high esteem. They were both leaders on and off the field — serving as role models. They encouraged and developed younger players. That’s what Owen wanted to be. So she put in the work to make it happen.

Every spot’s earned on a semifinalist team like the Trojans were last year. They were one of two West Conference teams to win a quarterfinal state tournament game — Kelly Walsh and Rock Springs becoming the first West teams to do so in a decade. They did it by pushing each other. And Owen earned her spot through hard work. In hindsight she was the perfect fit.

“Katie’s demeanor fits that center back role,” Realing explained. “She’s calm, physical, smart and she knows how to direct a defense. ... As a coach, to have a kid evolve into that role, I count myself as blessed to get kids like that.”

“I was comfortable in the position and just being an upperclassman,” she said. “All that timidity and shyness goes away.”

Of course she grew into that role. Owen is a noted self-starter driven by academic success. Her ACT numbers registered in the mid-30s. She’s also been the benefactor of a supportive family and the hard work of those that came before her. Perhaps that’s why she’s returned the favor during her unconventional next step.

Owen signed to continue her soccer career at Black Hills State long before the coronavirus appeared in Wyoming. It was out of state but still within driving distance of home. It had her preferred major and minor. She fit in well with the team. Black Hills State checked all her boxes.

She’s already a declared math major yet to figure out where to go from there. Something applied probably. The rest needs narrowing down.

No one’s doubted her abilities to prosper in the classroom. And she’s been just as driven on the field, having grown into her own.

“Given her calm demeanor, I’m sure she’s disappointed and heartbroken to not have her senior year,” Realing said, “but I’m sure she’s pulling herself up.”

HER TIME: Kelly Walsh senior Katie Owen was expected to be a leader on this year's team before the season's cancellation.

GROWTH: Owen was forged by the leadership that came before her and found the confidence in herself to make the next step.

SHE SAID IT: "I had to work my way up the ladder each year of playing. I just got a little better and adapted each year." -- Owen.

Kelly Walsh's Katie Owen heads the ball toward the sideline during a semifinal game against Cheyenne Central a the Wyoming State High School Class 4A Soccer Championships on May 17, 2019 in Jackson.

Kelly Walsh's Katie Owen heads the ball during the Trojans' game against Natrona County in the Casper Cup on April 30, 2019 at Cheney Alumni Field in Casper.